Mark Gatiss confirms where we won't be seeing Tycho Nestoris in season 5 | Watchers on the Wall | A Game of Thrones Community for Breaking News, Casting, and Commentary 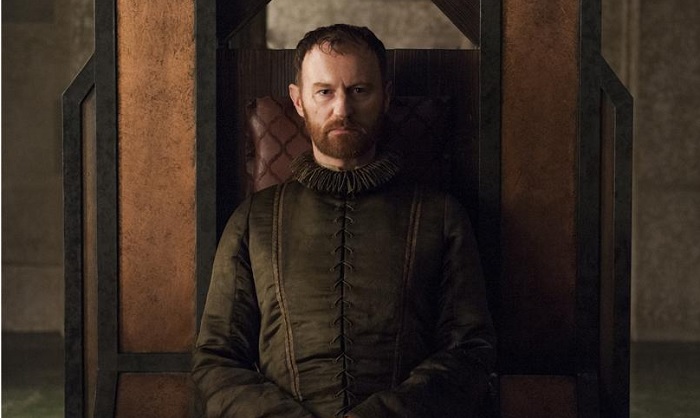 Actor Mark Gatiss appeared this week at the Mumbai Film and Comic Con, featuring in a fan Q&A, and fielding questions from the audience. While the bulk of the hour-long session was dedicated to talk of his work on Sherlock and Doctor Who, Gatiss also touched upon his time on Game of Thrones as the Iron Bank representative, Tycho Nestoris.

Gatiss was unable to say much about the upcoming season, but did mention a few things of interest.

“I’ve just filmed another episode in Croatia. But obviously I can’t tell you anything because they would have me killed. That’s how it works,” the actor told the con-goers.

“I think Tycho Nestoris is from later in the books and they’ve brought him forward a bit. I think I go to the- do I go to the Wall?” The audience confirmed for him that Nestoris does go to the Wall eventually.

“Does that mean I go to Iceland? Very exciting! I don’t really know what’s planned. But I had dinner with Dan and David, the showrunners, and I pitched the idea that I should be the last character surviving in the whole series. Only because the bankers survive everything.”

Gatiss referred to a single episode in his remarks, and confirmed that Nestoris is not yet headed for the Wall. Fans had been speculating that the Wall storyline might be further along at the end of season 5, with Jon Snow reaching the end of his A Dance with Dragons chapters.

With Nestoris still in Braavos, will Jon’s season 5 arc finish earlier than estimated by many fans, leaving some ADWD material saved for season 6? Or will the banker’s trip to Westeros be cancelled altogether? It seems pointless to introduce Nestoris at all if he won’t be journeying to the Wall eventually, after we saw Stannis receive a loan from the Iron Bank.

The Game of Thrones discussion begins at 21:15 into the complete Q&A panel: