In a recent interview with Vogue, Lupita Nyong’o was asked what show she’d love to cameo in. Her answer: “Game of Thrones.”

To be clear, Nyong’o is not demanding or campaigning for a role on Game of Thrones. This was her answer to one of 73 questions that also included who her favorite Disney character is (Pocahontas) and Luke Skywalker vs. Obi Wan Kenobi (Obi Wan).

Nonetheless, her answer draws attention to the much criticized lack of diversity in both Game of Thrones and ASOIAF. After all, D.B. Weiss and David Benioff would have to do some serious race bending or character expansion in order for Nyong’o to have a speaking role with a name.

We’re five books and five seasons in, and Summer Islanders remain mere side characters. Dorne’s chapters in the books do give characters inspired by Spanish Moors agency and autonomy (though their storyline was significantly less well handled in the show), but these characters still have a small presence in a predominantly white world.

Then there’s the matter of depiction as well as inclusion.

Earlier this year, The Telegraph interviewed Nathalie Emmanuel and asked for her thoughts on Daenerys’ storyline, which many argue has colonial or, at best, white savior undertones.

“I understand people’s feelings on the issue,” Emmanuel said, “But, at the same time I think the show is really good at creating characters of all races and color that have power and education. It’s not just a stereotype of ‘white powerful person’ and ‘enslaved non-white person’ – I think it’s a bit more complicated than that.”

It’s a fair point. Daenerys’ fixation on toppling slaveholding cities isn’t fueled by a Cecil Rhodes complex but by her own experience being sold by her brother to the Dothraki. That said, in-universe explanations can’t strip scenes of their real-world context. The image of a white woman crowd surfing on an ocean of adoring dark-skinned people dredges up a long tradition of white writers framing white heroes as welcomed saviors to benighted races.

Missandei and Grey Worm, frankly, rescue the show’s Slaver’s Bay storyline from being completely inexcusable. They’re interesting characters who are loyal to Daenerys yet share a romantic subplot and thus have wants and needs outside of their service to their queen.

Still, they are only two characters in a cast of thousands and the lack of representation in both the show and the books continues to leave many fans wanting.

Last year, George R.R. Martin responded to a fan’s criticism on his blog that characters of color have all been “servants, guards or charlatans” (this correspondence took place before the Sand Snakes appeared in season 5 … though they weren’t exactly hailed as champions of representation either). He acknowledged that Westeros isn’t a terribly diverse place to begin with and promised that characters of color will have “somewhat larger roles” in Winds of Winter but conceded that they will still be secondary and tertiary characters. 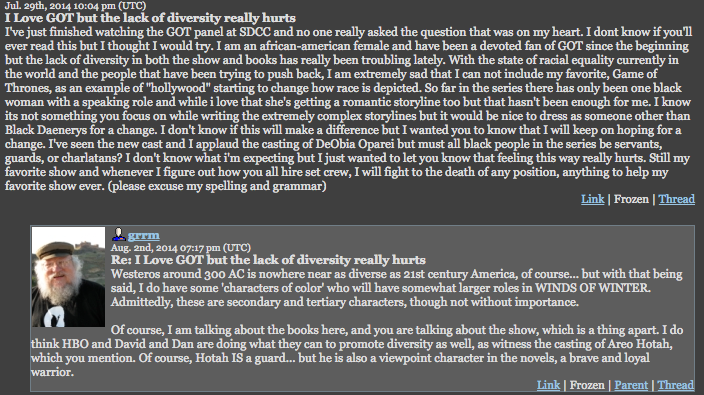 It’s almost apologetic the way Martin admits that none of the characters of color will be main players in his story, as if he lacks control over his own world. The thing is (and I try to use this excuse as rarely as possible): Westeros is a fictional setting. 300 AC Westeros can be as diverse as Martin wants it to be. Basing his story largely on medieval English history doesn’t mean the characters all have to look Anglo-Saxon.

Westeros and Essos are lands fraught with injustice but unlike systemic sexism, (another oft criticized aspect of his work for which historical inspiration has been evoked as justification) racism isn’t addressed as a problem. Characters don’t discuss it nor are characters of color shown to have been shaped by it. There is distressing subtext in the way people of color in Westeros and Essos are written but it isn’t acknowledged … which leads me to suspect that Martin put it in unintentionally. It’s a situation vaguely comparable to Tolkien’s depiction of men from the Eastlands of Middle Earth. Except, unlike Tolkien, Martin is writing in the 21st century and really, really should know better.

What do you think? And if Lupita Nyong’o does appear on Game of Thrones, who would you like her to play?