Kit Harington kept his crypt-teaser statue, and EW promises a trailer is coming! | Watchers on the Wall | A Game of Thrones Community for Breaking News, Casting, and Commentary 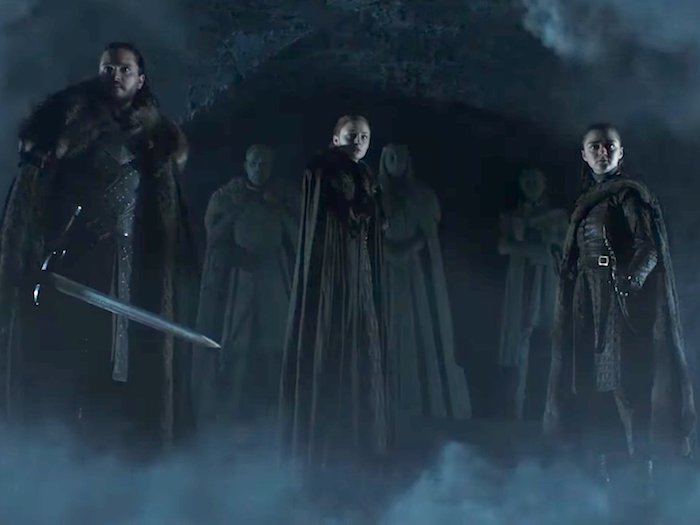 What better way to remember your time on Game of Thrones than a life-sized statue of yourself?

We know from previous news stories that actors from Game of Thrones have taken home various mementos from the show — Maisie Williams took home the Ned Stark-esque brown leather jacket from Season 7, for example. Kit Harington has expressed a desire to keep Longclaw once the series ends, although the showrunners have become less than willing to part with it. So maybe a life-sized statue will fill the void instead?

Insider reported that Harington revealed in a recent BBC Music interview that he kept the Jon Snow statue from the recently released, much talked-about Season 8 teaser and that it’s now part of his home decor (sort of).

“They sent it to my house so I’ve got it in my shed,” Harington said, laughing. “How sad is that?”

“I was the only one who kept their statue, that’s how narcissistic I am,” he said. “I’m gonna turn it into a water feature.” That’s something we’d like to see.

Speaking of Season 8, the unexpected teaser has us desperate for a full trailer, especially with the five seconds of new footage included in a 2019 lineup spot from HBO that premiered during the Golden Globes last week. So it made my heart stop for a second to read that showrunners Dan Weiss and Dave Benioff were once considering not even releasing a Season 8 trailer at all.

“[David Lynch] was saying he wished there were no trailers,” Benioff recently told Entertainment Weekly when asked about the trailer timing for the final season of the world’s most popular TV series. “And it’s true, you could just go into a movie and see something completely fresh.”

“I wish there were no trailers,” Weiss added. “I just want somebody to say, ‘Trust me, go see this.’ ”

Fortunately, the pair decided against a no-trailer-approach, noting that when they saw Ready Player One in theaters with their kids, “they played the Westworld trailer and it looked great. And we’re like, ‘Ah, we should do that.’ ”

Thank the gods we’ll still get a trailer, and with the premiere date of April 14th announced with Sunday’s teaser, speculation is rampant as to when that will be. It likely won’t be too soon — there’s still three months to go and they have to keep the hype sustained, as if that would be a problem — but when it does, we’ll be here to break it down scene by scene!