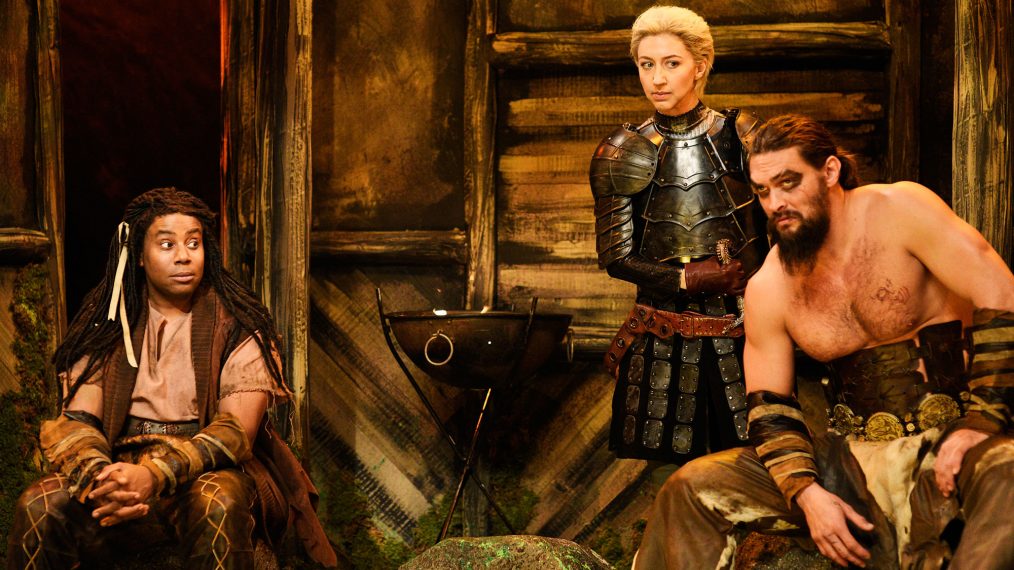 It’s been 5 seasons since we’ve seen Khal Drogo’s face on Game of Thrones. Following his death at the end of season 1, he made a brief appearance to Dany during her vision in The House of the Undying, when she saw her life as it could have been had he lived. As the years have gone on, our hopes of another Khal Drogo apparition have slowly waned. But as they say, just when you think he’s out, they pull him back in…to SNL (Saturday Night Live) of all places.

When it was announced that Jason Momoa was hosting SNL for the first time, I felt a flurry of excitement. Not only is Momoa our Khal Drogo now and forever, but he’s also seemingly such a cool, likable dude. So, the question on everyone’s lips was if he’d reprise the role that launched him to global stardom. The answer is, of course, a resounding yes:

In “Khal Drogo’s Ghost Dojo,” a sketch brought to us courtesy of Dothraki Public Access, one of my favorite humans on the planet, Kenan Thompson, plays newly minted bloodrider, Zerbo. It quickly becomes apparent that, like Khal Drogo, the sketch will be all about bringing back dead characters for a ‘talk show.’ Who did they bring back and what was the joke? Why watch the video when I can tell you all about it!

Hodor (Beck Bennett) shows up and exercises his typically verbose grasp on language. On his way out, he is asked (naturally) to hold the door for the next guest, which was The High Sparrow (Pete Davidson), who, upon realizing that both he and Khal Drogo have ended up in the same heaven, his life of holiness may have been for nothing. “Almost makes you question religion,” he quips. Following this, Khal Drogo gives him his trademark ‘golden crown,’ and off the High Sparrow goes. Then, a very confused Brienne (Heidi Gardner) pops up, and questions Khal Drogo’s questionable identity politics, to the likely applause of many Twitter pundits everywhere. Lastly, a character everyone is happy is dead, Joffrey, played by SNL everywoman Kate McKinnon, turns up and stages a fight with Olenna Tyrell (Aidy Bryant) in a…Jerry Springer(?) mashup. I’m not sure what happened here; this one was confusing for me. Ah well.

Throughout the sketch, there was a running joke about how fast the show will kill off a character, leaving them with many options for characters for this sketch. All in all, it’s pleasant escape for 6 minutes of your time, and now that you’ve read a full synopsis of it, do please go and enjoy the actual sketch!

Did everyone enjoy the rest of the episode? Sound off on Jason Momoa’s SNL debut in the comments below!