Jacob Anderson wishes Varys was a merman, Michele Clapton talks dressing two queens, and more | Watchers on the Wall | A Game of Thrones Community for Breaking News, Casting, and Commentary 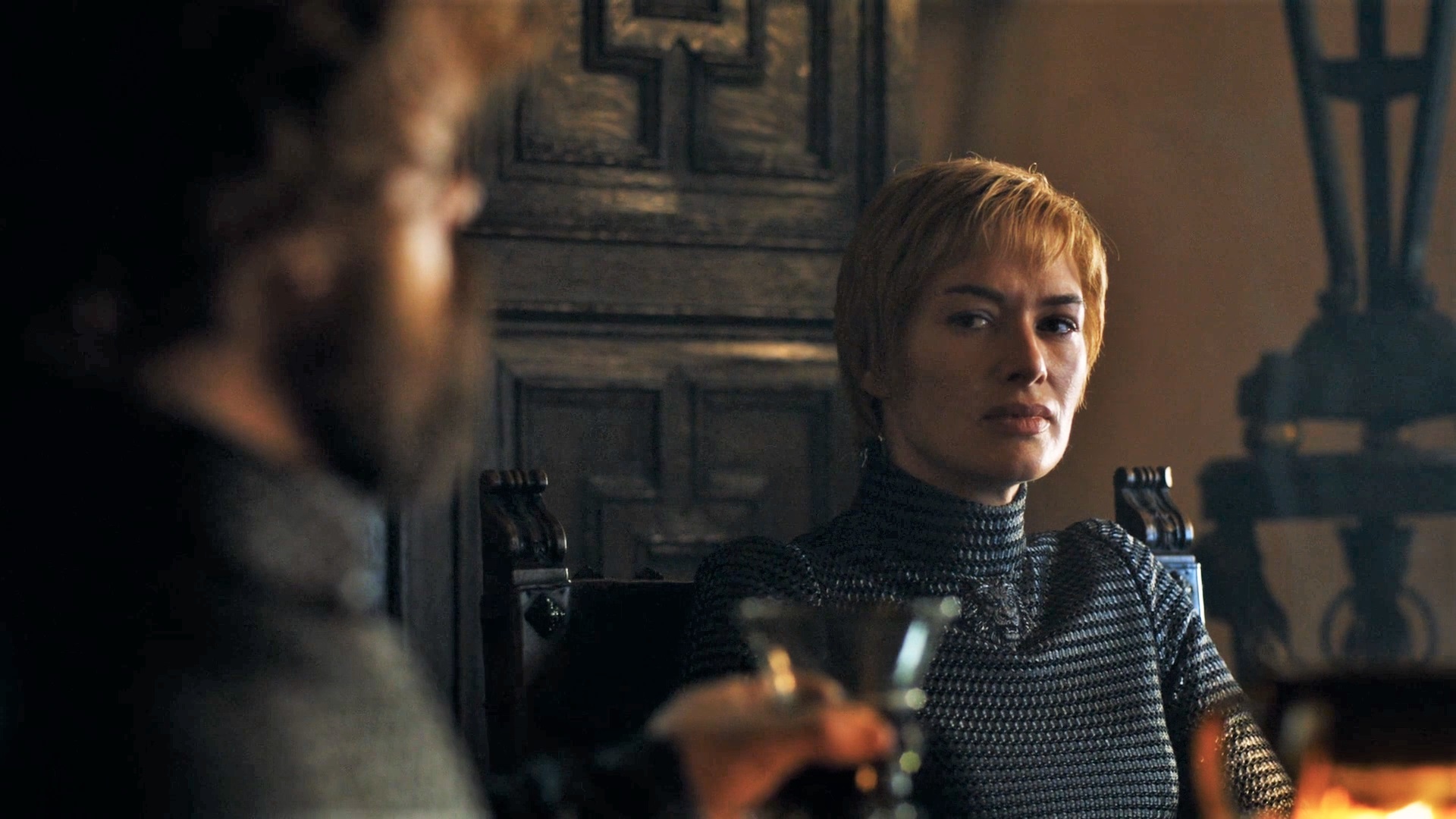 Cersei’s armored black dress is discussed in detail by costumer designer Michele Clapton in one of the many interviews we round up below.

With season 7 of Game Of Thrones ending Sunday, the dust has just now settled here at the Wall from a frenzy of recaps, roundups, post-mortems, analyses and interviews from cast and crew about the epic season finale. However, despite officially entering the offseason, the news is still coming fast and thick. Here’s what we’ve rounded up since “The Dragon and The Wolf” aired Sunday.

From Nerdist: Jacob Anderson doesn’t care that the Varys-is-a-merman theory has been thoroughly debunked — to him, it’s one of his favorite fan theories and so crazy that it should be true. 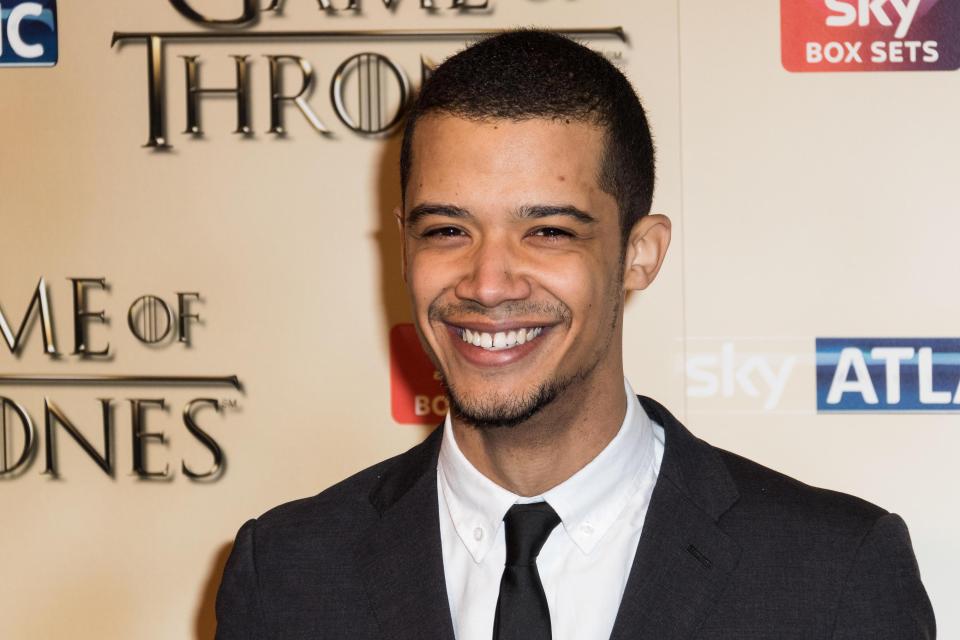 “It works! It makes sense,” Anderson, who plays the stoic Unsullied commander Grey Worm, told Nerdist’s Alicia Lutes in a recent interview. “I don’t think it’s true, but it should be.”

Anderson also revealed his favorite theory about his character: that Grey Worm will end up with a golden, um…appendage. I’ll leave it to your imagination, or you can watch the full interview here.

From Entertainment Weekly: Unlike the dramatic “Light of the Seven” track that played during the season 6 finale, longtime Thrones composer Ramin Djawadi wanted something more subtle for the finale of season 7 and the long- awaited Jon and Dany hookup. It’s how he arrived at “Truth,” which was a combination of the Stark and Targaryen themes he’s used in previous seasons and was hinted at during episode 3, when Dany gives Jon permission to mine the dragonglass. 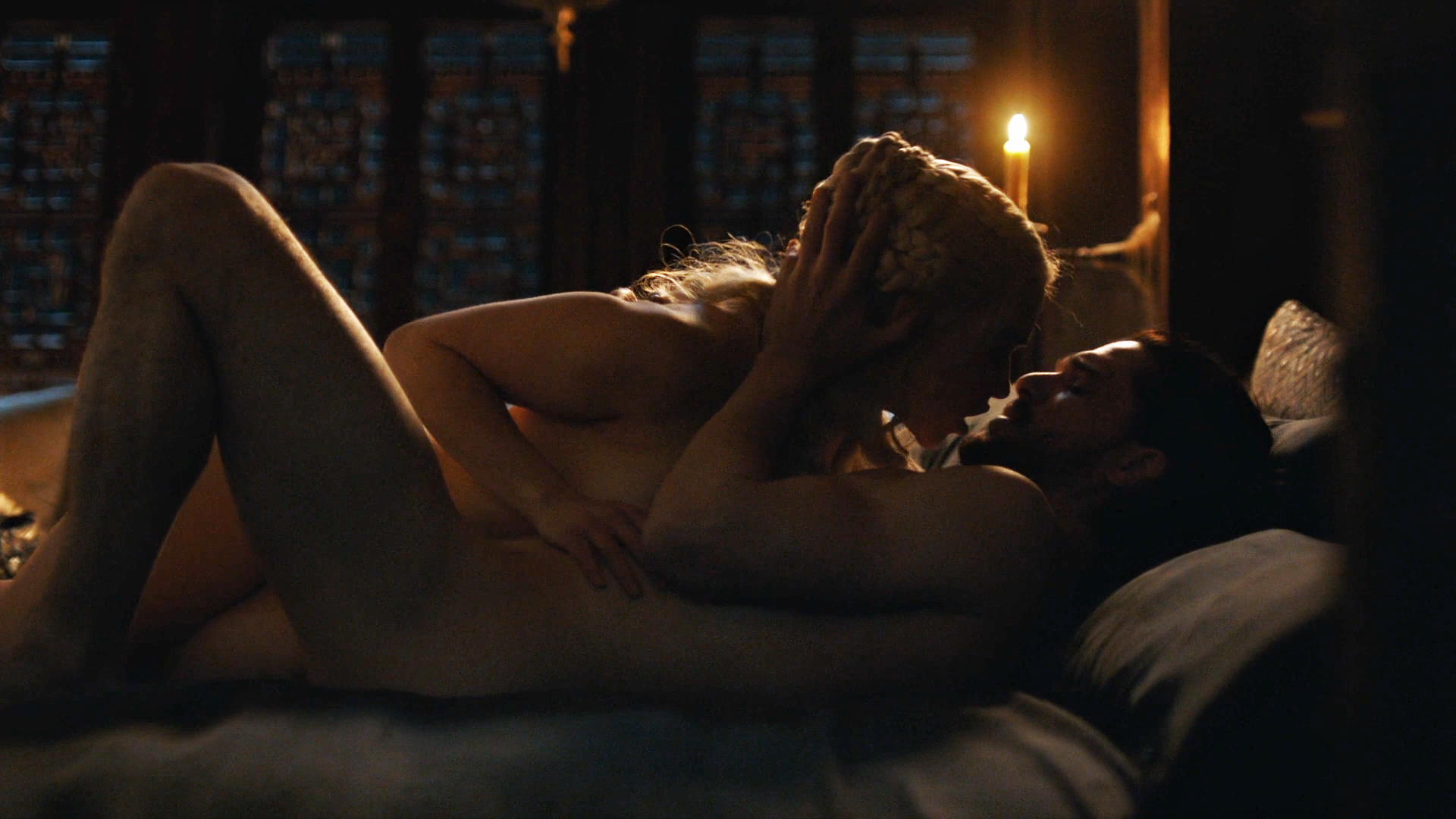 Gotta set the mood just right for hookups on the high seas.

“It’s supposed to be its own thing,” Djawadi told EW. “The trick with this theme is that it really had to be a love theme but when we played it in earlier episodes, you don’t want to give away the love too soon. So it had to be a theme that could be a little bit mysterious, a little moody, and you could play it darker at times. I know everybody was expecting [them to get together] but we really had to be able to do this slowly.”

From Making Game Of Thrones: Michele Clapton, veteran Thrones costume designer, talked about dressing two queens — Cersei and Dany — and how the season saw their styles evolve. For Dany, that meant dressing for a colder climate, incorporating colors that represent her House sigil, and assuming more authority with what she wears. 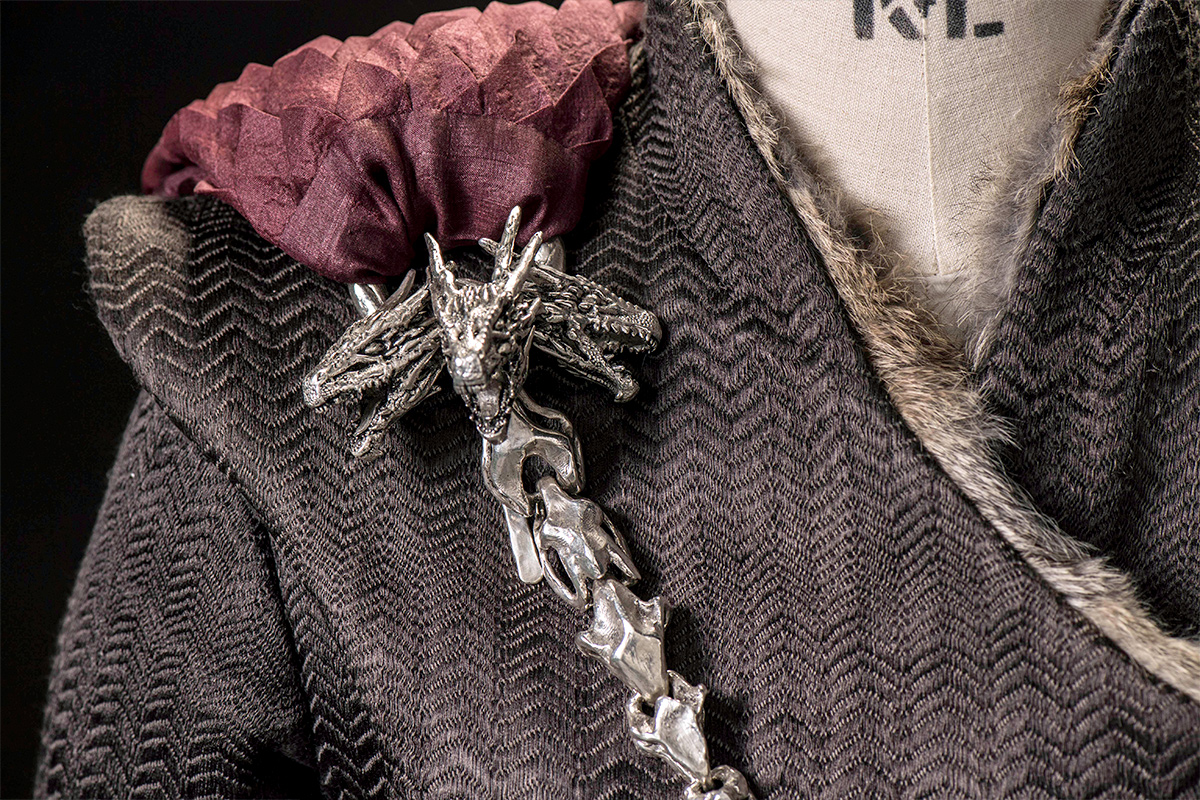 “We kept the boots and trousers because that’s her trademark. I wanted to start going towards charcoal and red, because those are [Targaryen] sigil colors,” Clapton said. “I didn’t want her to wear a crown, but I wanted her to wear something that signified status.” Instead, she chose a chain with a three-headed dragon on the end, because “There was a weightiness to it. I wanted her to have authority.”

Clapton also talked about Cersei’s looks in season 7, which have been “extravagant,” especially the black color palette and in the use of spikes on many of her gowns. For the meeting in the Dragonpit in the season finale, however, Clapton used a chain-mail style dress and a black molded coat, with what she called “one telling design: a slashed pattern on the back of the queen’s coat.” 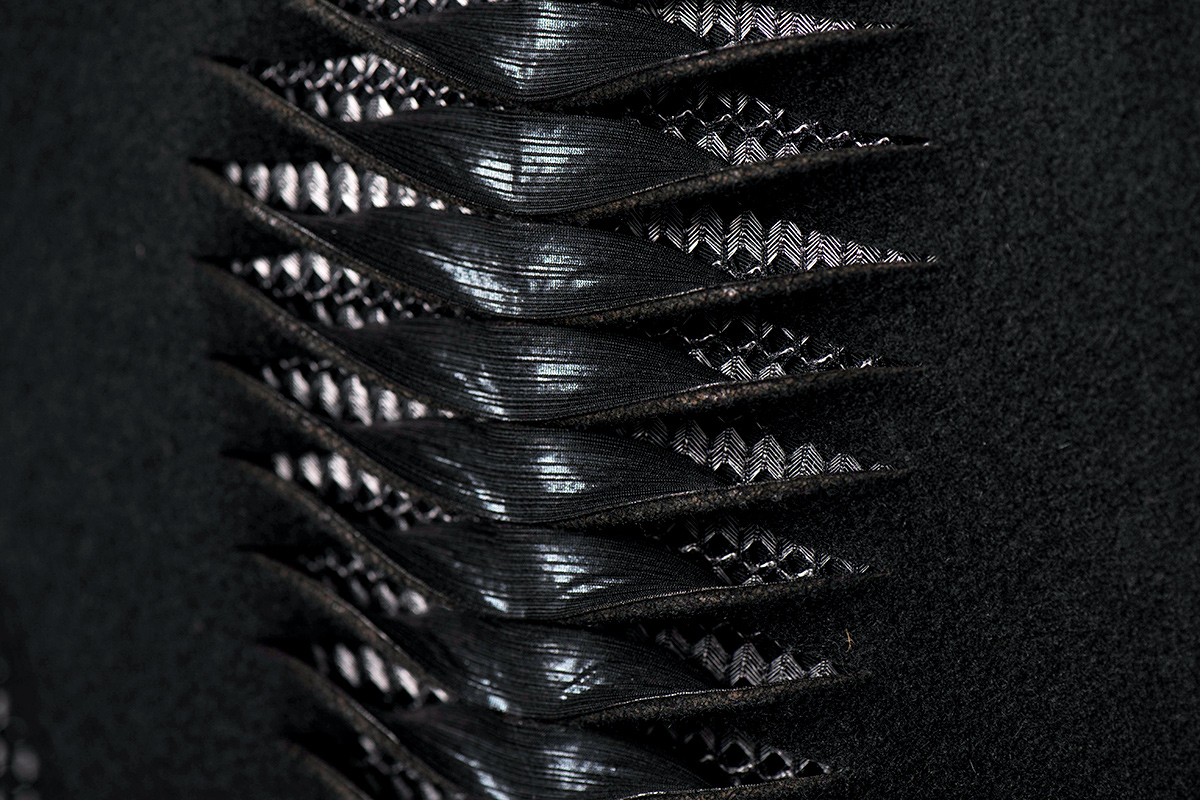 A closeup of the back of Cersei’s gown from the meeting in the Dragonpit during the season finale.

“I knew she was lying,” Clapton explains what inspired the look. “Something about the slashing and the twisting told you a lot about her character, a contradiction of the costume from the front. It’s almost like a sting in the tail, something on edge as you see her walk away: there’s something really disturbing about this woman.”

Making Game Of Thrones also had up-close views of the diary of High Septon Maynard that Sam transcribed and from which Gilly learned that Rhaegar Targaryen’s marriage was annulled (still waiting on you to give credit where credit is due, Sam!!), and of the letter that Jon wrote to Sansa after pledging fealty to Dany as rightful Queen of the Seven Kingdoms. 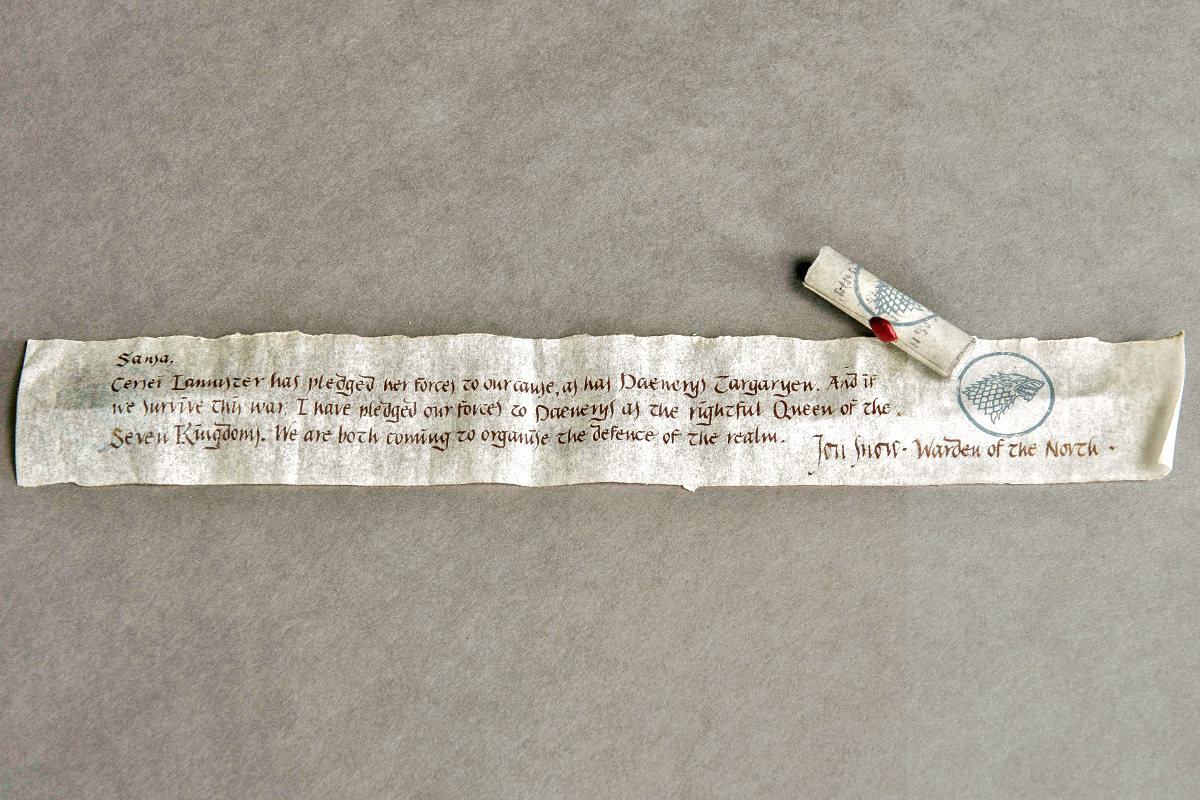 This letter is going to cause problems in season 8.

The costuming interview is available here, while close-up views of the letter and diary can be seen here.

From Australia’s News.com.au: If one of the most exhilarating scenes of the season 7 finale wasn’t Theon finally growing some…courage and pummeling the Ironborn sailor Harrag who blamed him for Yara’s capture, you might want to check your pulse. Australian actor Brendan Cowell, who played the character in episodes 3, 4 and 7, talked about having the freedom to act without reining in any ferocity as part of the Thrones cast. 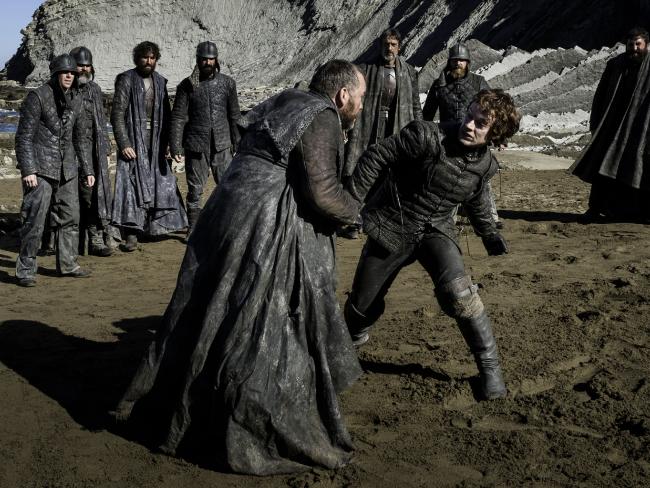 “[W]hat’s great with the show is it gives you full license to play really carnal characters because it’s a brutal world,” he said. “You can be incredibly violent and you don’t have to give a reason, you don’t need to give a backstory, everyone’s surviving and everyone will kill and eat anything they need to at any time. So as an actor it’s a wonderful world to just be ferocious behind the eyes and not question it.”

From Format magazine: In an in-depth interview, veteran Thrones cinematographer Robert McLachlan talked about his influences, his work on another HBO hit, “Westworld,” and what it was like to film season 7’s episode 5, “Eastwatch” — especially the scene in which Jaime tells Cersei about the “changing nature of war” (i.e., having to deal with dragons on the battlefield). 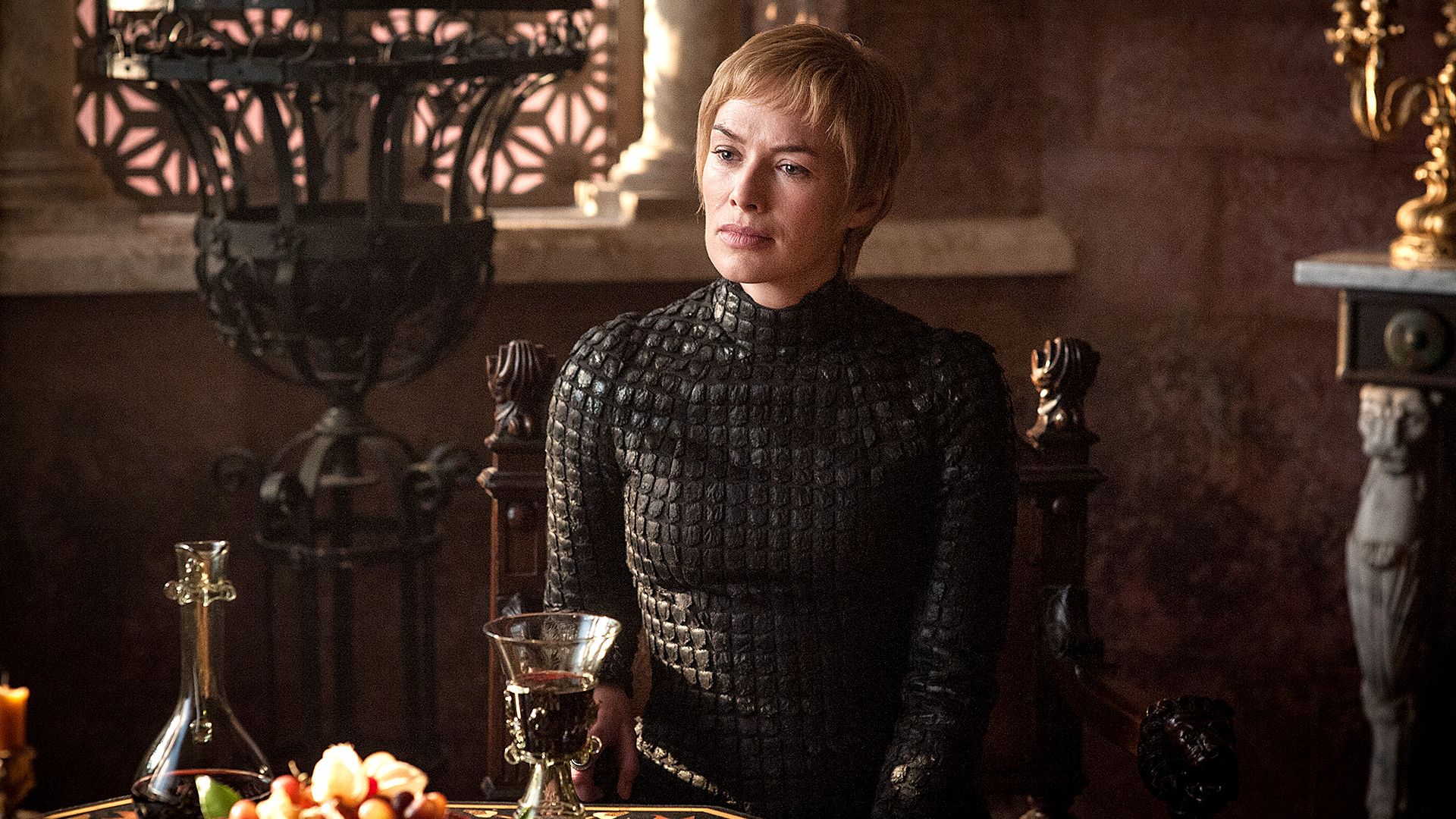 Cinematographer Robert McLachlan worked to make the lighting as unique as possible in this scene from episode 5, “Eastwatch.”

“There was a closed-in balcony behind a lattice, and the only backing behind that was a huge sheet of sky blue, which had no character whatsoever,” he said. “The last time I shot the chamber I just blew the lattice out so it felt like a hot, white sky outside. This time I wanted to add more texture. Jaime delivering this information about the changing nature of war to Cersei seemed like the equivalent of witnessing the A-bomb drop in the form of a dragon. I wanted it to feel like the sun was setting on the Lannister Empire, and that fit with time-of-day in the storyline.”