Game of Thrones - The Rock Musical: An Unauthorized Parody Smashes its Way to Fighting Form Off Broadway | Watchers on the Wall | A Game of Thrones Community for Breaking News, Casting, and Commentary 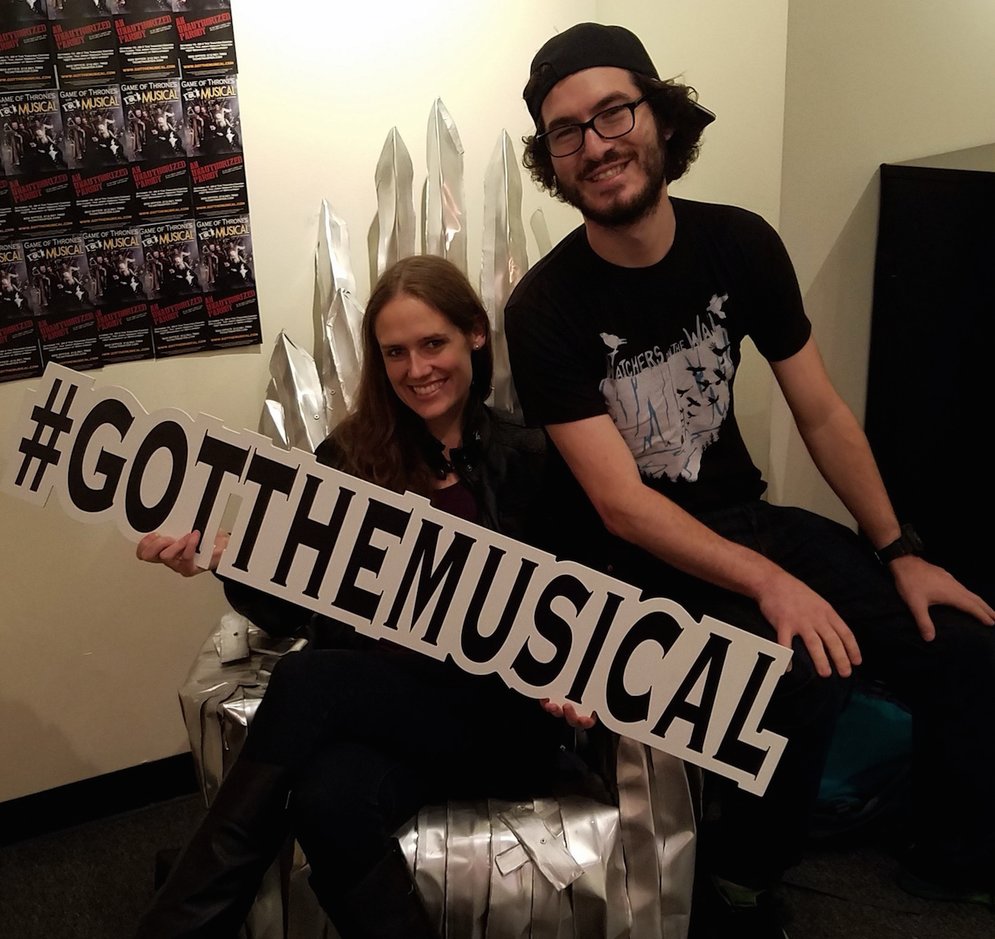 A few weeks ago, I previewed the upcoming Game of Thrones musical parody, exclusively interviewing Allison Lobel, the production’s Sansa and a friend of mine from college. Having been lucky enough to see it live, I can say handily that it was worth the wait. Cast all your notions of “THIS IS A SERIOUS DRAMA” to the side, because if you walked into this without ever having seen GoT, you’d be hard pressed to be otherwise convinced that GoT isn’t a comedic riff in the vein of Monty Python. Indeed, the jokes come so rapidly in this parody that the comparisons to Monty Python’s Spamalot and Forbidden Broadway definitely hold weight. Therefore, expect not to walk out sad that Ned loses his head (spoilers); instead, expect to walk out having lost your funny bone from laughing too hard for the two hours’ runtime (with intermission) of the musical.

As the show is ostensibly a comedy, it’s hard for me to say too much about it, given my personal principles of never wanting to ruin the jokes. So, for those who intend to see the show (and I highly recommend it to all who can), I promise not to give too much away.

The storyline (if you can call it that) covers season 1, and as such, the long dead characters of Ned, Viserys, King Robert, and Khal Drogo all feature prominently. While it’s largely an ensemble show, Ned (Milo Shearer) brings Ned back from the grave in a ferociously hilarious and scene-stealing performance. In an early song between him and King Robert (Ryan Pifher), the song concludes with Ned accepting King Robert’s “hand job.” This sort of dialogue is typical throughout the show and had the audience in stitches. This duet is not to be outdone by Act 2’s love duet “Dothraki Love Song” between Daenerys (Mandie Hittleman) and Khal Drogo (Music Producer and Director Ace Marrero). Their pop belt was the perfect 11 o’clock number to rein in the show.

Sansa (Allison Lobel) and Arya (Meghan Modrovsky) feature prominently as extreme counterparts, with Lobel operatically portraying the doe-eyed ignorant bliss of season 1 Sansa to perfection, and Modrovsky turning more and more goth with each stage appearance from Arya. The laughter never ceased. Another highlight was when the sisters were joined by Daenerys, Catelyn (Delilah Kujala) and Cersei (Music Writer, Producer & Director Erin ‘Queenie’ Stegeman), in which the ladies delivered the diva belt ‘Stronger.’ 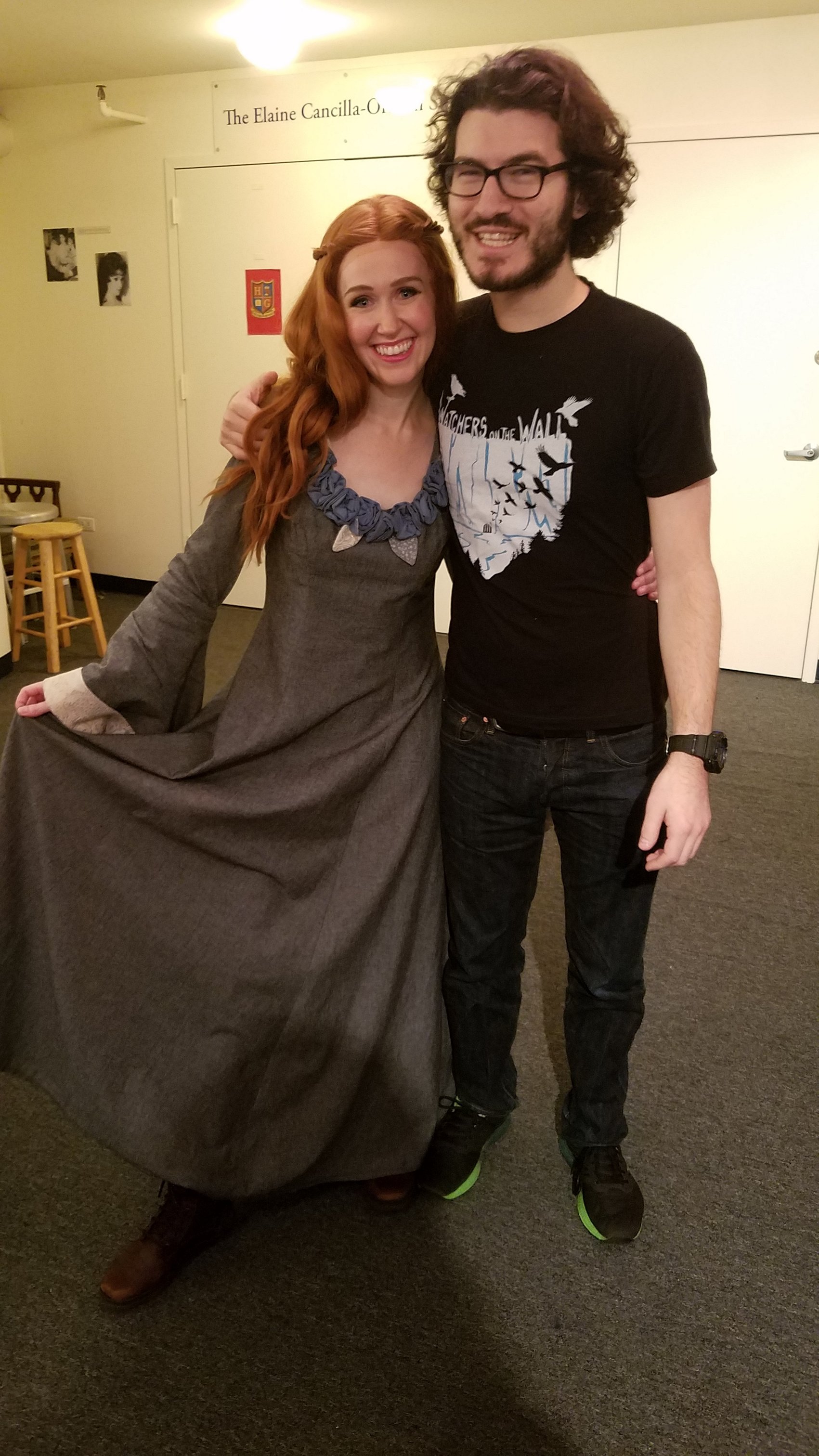 Me with Allison Lobel (Sansa)

Tons of cultural references pervaded throughout, from Joffrey being called Draco Malfoy, to the entire character of Alliser Thorne being the Trump of Westeros – ‘Build that Wall, Make Westeros Great Again, Keep out the Drug-Dealing Wildlings, etc.’ Several ongoing jokes revolved around Jon’s consistent broodiness and how no one likes him – “I hope you die in the season 5 finale, Jon!” – a standout line where the audience response clearly separated those who know the show very well and those who would only pass as casual viewers. There were a peppering of jokes revolving around how there are too many characters and not enough actors, lots of bits around no one being able to pronounce Catelyn’s name right (Kay-tuh-lynn?), a whole song devoted to Tyrion’s (Drew Boudreau) character immunity, and a quick reference to a Kings of Theon concert, which reportedly “reeked.” 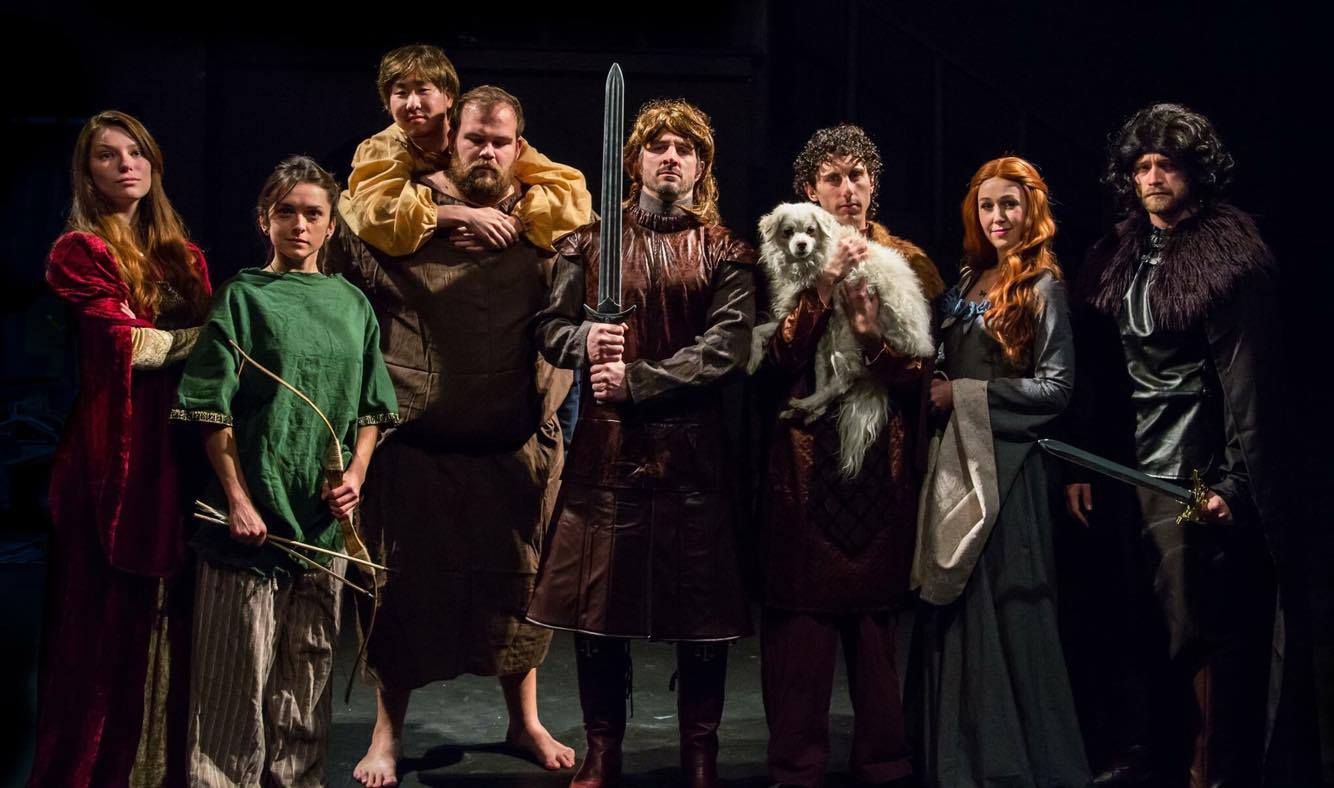 Still, one thing holds this show back from the next level, and that is its very evidently low-budget. This works for the costuming, which looks purposefully cheap; if they had TV-quality costumes, it would look a little too jarring amidst the material. However, the downfall is in the audio. With a pervasive lack of headset microphones, the cast’s voices are often drowned by the pre-recorded music. And because some actors are simply louder than others, the cracks do show. Still, this is a simple problem to fix, not to mention one that needs fixing ASAP.

All said, this show has it all, for the die-hardest fan to the most casual viewer – there is something for everyone. And who better to emcee the evening than George R. R. Martin (Jay Stephenson) himself? Popping in and out of the show to narrate the story and keep the audience on our toes was a delight, and ensured that the mood remained lighthearted throughout. Yes, it was a great afternoon matinee at the theatre, and I hope you can all attend!

Does anyone have tickets? Has anyone else seen it? What did you think? Sign off in the comments below!

Tickets can be purchased here for $63. Game of Thrones – The Rock Musical: An Unauthorized Parody runs October 10th – October 29th in the Jerry Orbach Theatre at the Theater Center, 1627 Broadway, New York, NY 10019. The running time is approx. 2 hours 10 mins, including the intermission. Box Office: (212) 921-7862 or via Ticketmaster. For more information, please visit gotthemusical.com