Game of Thrones: Post-Mortem of "Oathbreaker" | Watchers on the Wall | A Game of Thrones Community for Breaking News, Casting, and Commentary 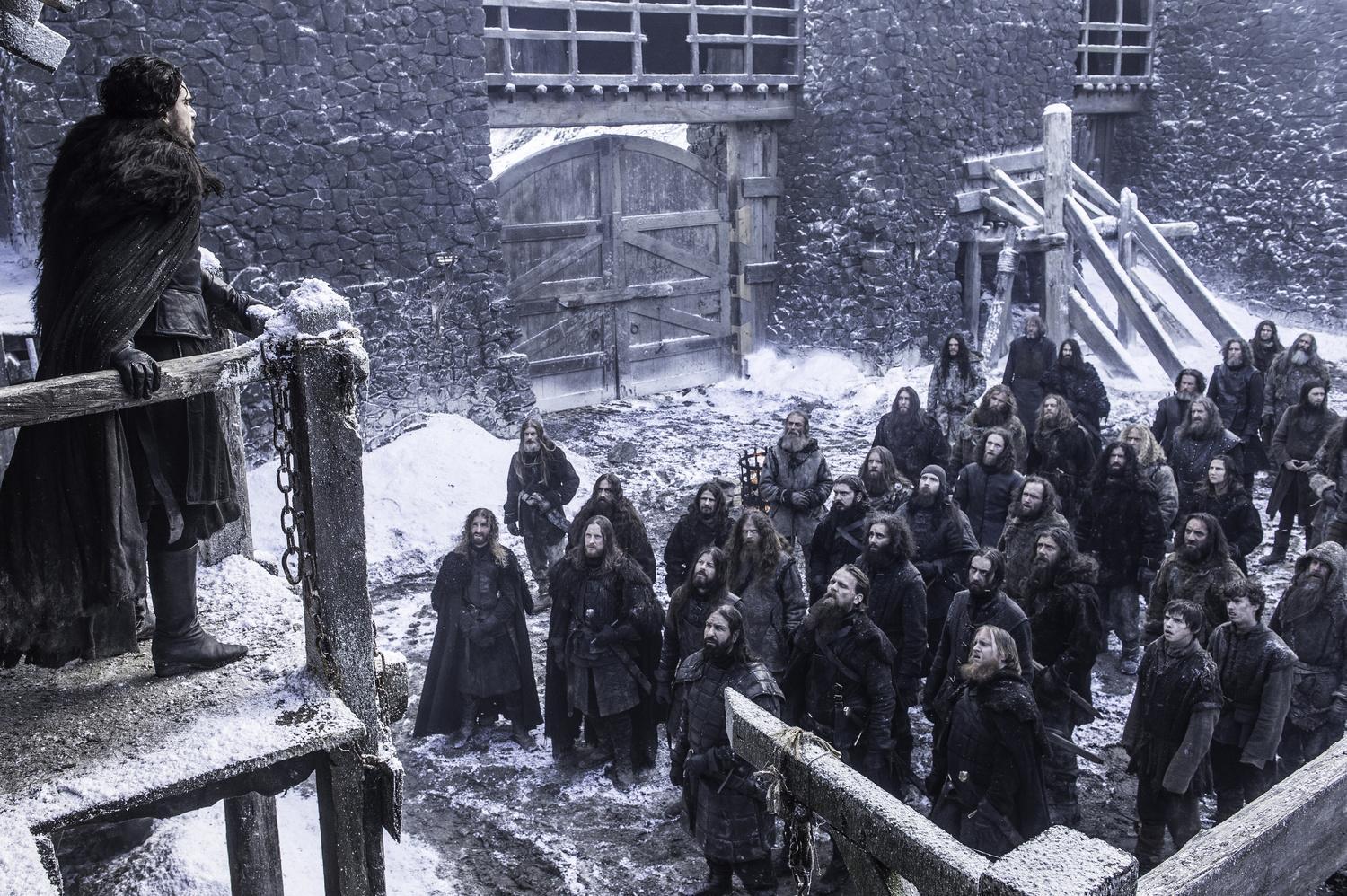 Flashbacks, surprise returns and Olly death, what more could you want from an episode? Now that we’ve all had a chance to recover from this week’s joyous Game of Thrones , let’s take a look at some of the videos and interviews surrounding “Oathbreaker.”

Entertainment Weekly spoke to Owen Teale about how he played his role as the hardened Ser Alliser Thorne.

Thorne’s boots is not a nice place to be. I found the most important thing when playing the character was to just get rid of a whole section of feelings that I have as a human being — like joy, for instance, that’s just gone. Once I achieved that, in my mind, to look at Jon Snow, who has the world before him and talent and is this personal human being, to look at him while you’re feeling joyless, then Snow presses all the wrong buttons — that really helped to be able to react to him as a character and not as me.

They also discussed fan reaction to his murder of Jon Snow and some of the stranger things people ask him to do in public.

Jon Snow represented hope and humanity and he’s a very lovely guy and I thought people would just hate me, but I have to say that wasn’t true — most just thanked me for bringing such drama to the show. They hated the moment, but loved it as well….Once a drunk came out of a restaurant with a knife in his hand and I thought, ‘which way is this going to go?’ Then he offered me the handle and said, ‘Oh no-no-no, I just want a photo – you hold the knife to me.’ I got used to that. People want me to look very mean for a second and say, ‘for the watch.’ I’ve really enjoyed doing something as an artist that provokes such a reaction.

Talking about his fate in Oathbreaker, Teale reveals:

I wasn’t sure what was going on and I kind of demanded a bit more openness because I was about to do my deal for season 6. I refused to close my deal until they told me, I wanted them to be clear with me. It was all quite close to filming. It wasn’t a very long conversation, it was a bit of mutual appreciation society. I felt a great sense of achievement and a sense of loss. Thorne was never an easy guy to be with.

You can read the full interview here

Entertainment Weekly also spoke with everyone’s favourite resurrected Night’s Watchmen Kit Harington about returning from the other side.

At first, I was worried that (Jon will) wake up and he’s the same, back to normal — then there’s no point in that death.  He needs to change. There’s a brilliant line when Melisandre asks: ‘What did you see?’ And he says: ‘Nothing, there was nothing at all.’ That cuts right to our deepest fear, that there’s nothing after death. And that’s the most important line in the whole season for me. Jon’s never been afraid of death, and that’s made him a strong and honourable person. He realizes something about his life now: He has to live it because that’s all there is. He’s been over the line and there’s nothing there. And that changes him. It literally puts the fear of God into him. He’s seen oblivion, and that’s got to change somebody in the most fundamental way there is. He doesn’t want to die ever again. But if he does, he doesn’t want to be brought back.”

Of the Night’s Watch, Harington has this to say:

He’s done with it.  He’s seen the other side, seen what’s there, and comes back and realizes he needs to lead his life and get out of there. This place betrayed him, and everything he stood for has changed. Plus, he had to kill a child, Olly, and that’s what really does it. He kills an under-age kid and he can’t see the point in being up there any more. At the heart of it, he knows by staying at the Wall he can’t help the kingdoms and he’s probably going to die very quickly if he stays.”

Check out the whole thing here

I don’t really know much more than the audience does. As an actor, you play different sides of the character, and if they’re contradictory, then there you have the secret or the enigma. It’s great to play a character that is multi-layered and not straightforward because it gives you an opportunity to discover different shades of the character…Jaqen doesn’t like to get his hands dirty. If he does something, he is very secretive. He would never show that things take an effort; he makes everything seem effortless.

On his relationship with Arya:

I think he definitely has a soft spot for Arya. Otherwise he wouldn’t be spending that much time with her and really trying to give her the best training she can get. Obviously, Arya doesn’t see it that way. After Season 5, I got a lot of reactions from the audience asking, “Why? What did you do?” But from his point of view, over the seasons, Jaqen has been very consistent with what he wants. He picked Arya for a reason, and he’s not making it easy for her, but hopefully that’s in her best interest….Jaqen wants to continue with Arya’s training to make her the best possible weapon that she can be, and we’ll see if Arya complies with that.

The blog also spoke to Carice van Houten about Melisandre’s role this season.

We start with messy Melisandre – she looks bad, she doesn’t sleep – to her slowly regaining her faith and her confidence… slowly feeling like she has a place in this game.  (Davos) can see her vulnerability for the first time. She’s more approachable. They’re in the same boat because they both lost. First they lost Stannis, and then Jon Snow, who they had high hopes for. That bonds us a little bit.

On seeing Jon Snow alive for the first time:

She’s completely confused. She doesn’t really understand what her power is, exactly. When she basically says to Davos in the second episode, ‘I don’t know how to do it, don’t count on me, I’m nobody really,’ she’s in a true identity crisis. So once it works out, she is completely confused how she did it. But she regains a little bit of her faith, just a sparkle of hope that there might still be something, that she’s not completely crazy.

She discusses what Melisandre makes of Jon revealing there’s nothing after life.

Well, I think she wanted to hear a little bit more than “nothing,” like anyone would. In that sense she’s the eyes of the audience. Anyone would ask a person who comes back from the dead, “Please tell me there’s something good there” – or that there’s something. And he says nothing. That’s as frustrating to her as to anyone, I think.

Check out the rest of the interview here.

Finally, new Khal in town Joe Naufahu had a quick chat with The Wrap about Daenerys’ storyline this season.

The Dothraki want to follow their traditions and Daenerys wants to do something else, so it’s going to come to a crossroads.  Someone’s going to have to make a decision. There’s going to be fireworks, for sure.

Naufahu also said that his Khal Moro is a little different from the others we’ve seen on screen so far.

He’s got a good sense of humor and I think he’s a little more relaxed.  He doesn’t really show his power, and he enjoys a good joke with his bloodriders.

You can read the original article here.

In this week’s “Inside the Episode” David Benioff and D.B. Weiss discuss employing the flashback device to explore Ned Stark’s history, as well as looking at Daenerys’ arrival at the Dosh Khaleen, and exploring the themes surrounding Jon’s resurrection.