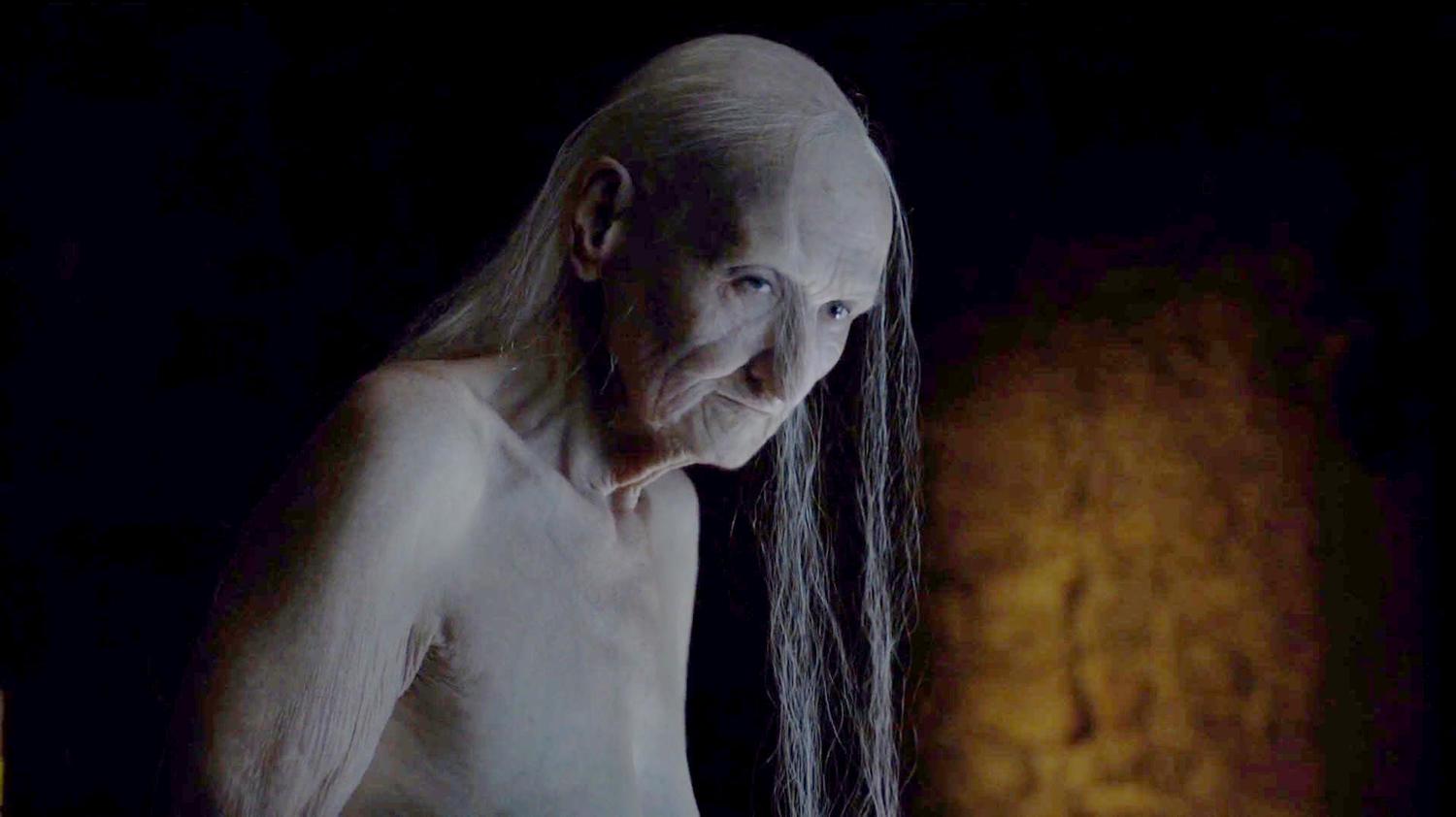 Last year, as part of the GoT50 celebrations leading up to Game of Thrones season 6, the Watchers looked back on previous years’ episodes with a fresh eye, remembering the highs and lows and how the world reacted along with any significant points. All 50 episodes were covered, and we figured that we should continue the process this year, refreshing everyone’s memories with recaps of the past ten episodes.

Starting off the Season 6 Memory Lane, with 10 days remaining until the season 7 premiere, will be a great friend of the site. He took part in last year’s Memories, and is a damn hero of a helper during the Watchers on the Wall Awards every year. Give a hearty Watchers’ welcome to Greatjon of Slumber!  – Sue the Fury

The premiere episode of season six, “The Red Woman,” gives us a series of women who have been brought low by circumstance throughout Westeros (and Essos), and we see all of them struggling to hold onto whatever sense of power – or dignity – they might possess in an unforgiving world where women struggle to achieve even a modicum of power. Some of these shifts are obvious, and were telegraphed in the Season Five finale – most notably Dany’s capture by the Dothraki, as well as Arya’s blindness, while others are only first reacting to news that we viewers possessed, namely Cersei and of course, Melisandre, whose nickname gives us the episode’s title.

The revelation at the end shows Melisandre for all that she is – her ancient, naked figure giving us context for her esteemed knowledge, the way she has, in previous seasons, been able to wave away all concerns about the Stark-Lannister War, along with other events that seemed important to the characters in question but in the larger framing really were meaningless. But it also lays bare the limits of her knowledge, and her recognition that her interpretation of the flames was perhaps incorrect, or at least faulty in some fashion. She erred in her thinking when it came to the late Stannis Baratheon; her encouragement of the burning of sweet Shireen having backfired, the death of Selyse, a true believer, hanging over her head. Add to that what we see in this episode – that she saw Jon Snow, fighting in the flames at Winterfell, only now to see him dead, stabbed by the treasonous Nights Watch members – and her despair is all the more notable.

This episode confirms the suspicions many had, that Melisandre was actually hundreds, if not thousands, of years old, and therefore possessed wisdom that others could only imagine. We expect more from her, then, but her dogmatic, rigid thinking has brought her to this point, where she feels the need to strip herself down (Carice van Houten is a regular when it comes to nudity on this show, but this instance doesn’t feel exploitative, at least) and look herself over, shorn of the amulet that either keeps her young or keeps the appearance to others of youth.

Cersei’s been brought low as well, and she’s thinking in mystical fashions too. It doesn’t take long before she recognizes that Jaime’s grim face as he approaches the shore, having returned from Dorne with their dead daughter, that Myrcella is indeed gone, and she weeps and shuts her eyes. Unlike Joffrey’s death, when she cast blame at Jaime for not protecting their son, she by now is more of a mind to accept the words of the wood witch whom we met in Season Five, who told her of the “golden shrouds” that all of her children would wear before her time was up. To her, this death is a signal that this prophecy will not be undone, and can’t be reasoned with – that Myrcella will rot, and deteriorate, and that everything she has will be taken away from her. Jaime does his best to try to keep her spirits higher by again closing walls around her and him, the only way they’ve lived for years after the abuse from their father forced them into each others’ arms. But it doesn’t have the same effect; Cersei seems irretrievable here, and she carries her sadness with the additional knowledge that her youngest, Tommen, is likely to meet a similar fate.

Daenerys is in no more envious a situation: captured by the Dothraki, none of whom are aware of who she might be, even though she has been running Slavers’ Bay for some time and is notable as the Khaleesi of the Great Grass Sea. However, Khal Moro – a new character, played by Joe Naufahu – eventually gets the hint, and the typical threats of rape are replaced with a bit of reverence but an order that the Great Khaleesi will now have to live out her days with the Dosh Khaleen, the widows of the khals, in Vaes Dothrak. (We also get a nice return of a couple of “it is known” ladies, in this case, two wives of Khal Moro.) 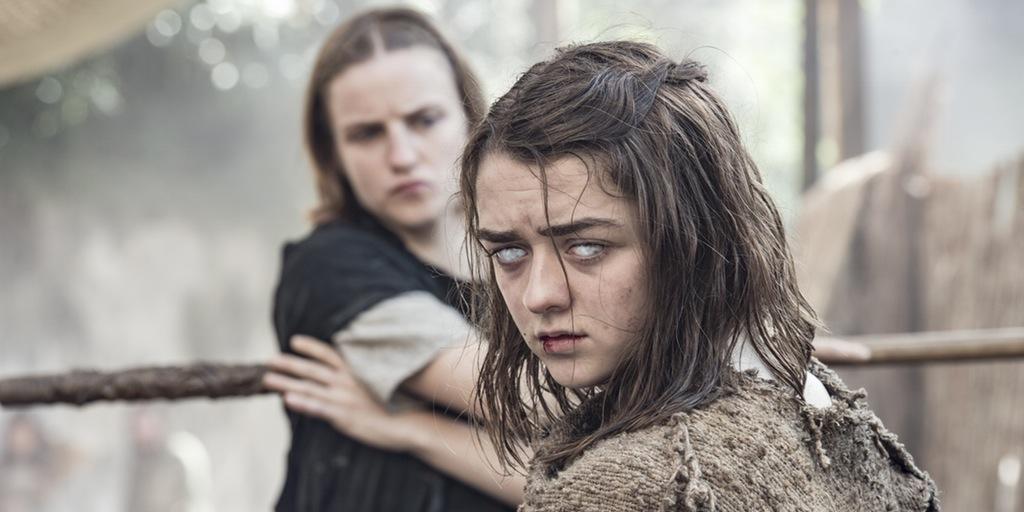 Arya, too, is at a low point, living as a blind beggar on the streets, waiting patiently for a few coins here and there. Arya’s in a bad spot, not having gotten used to her blindness yet, and again taunted cruelly (and somewhat tediously) by the Waif, who is unwittingly starting to sow the seeds of her own death by training Arya to move without eyesight. That’s later, though, and for now, we just have to deal with Arya’s suffering.

Margaery’s situation, too, has not improved – she sits in a cell, listening to scripture from Septa Unella (given a name here for the first time), told that she has still not reached a level of piety that will allow her release. Margaery, as always, is playing the game, but it is also going to take some time before she has anything resembling a firm position.

The only two women who seem to have recovered some sense of power are Brienne of Tarth and Sansa. We find the latter with Theon Greyjoy, still fleeing Winterfell, and forced to ford an icy stream to get away from Ramsay Bolton’s dogs. It doesn’t work, and how they don’t eventually get hypothermia is beyond this viewer. Either way, Brienne shows up to save them, and kills the Bolton redshirts, who actually put up a bit of a fight before Brienne, Podrick, and Theon take them down. And in the episode’s most beautiful scene, we get callbacks to both Season 5, when Brienne attempted unsuccessfully to offer her sword and service to Sansa, and more naturally Season 2, in one of the series’ most enduring moments, when she does the same with Sansa’s mother, Catelyn. The dialogue intentionally mirrors that moment, and we hear the Stark theme play in the background, a reminder of all that has been lost since then, most notably Catelyn Stark. 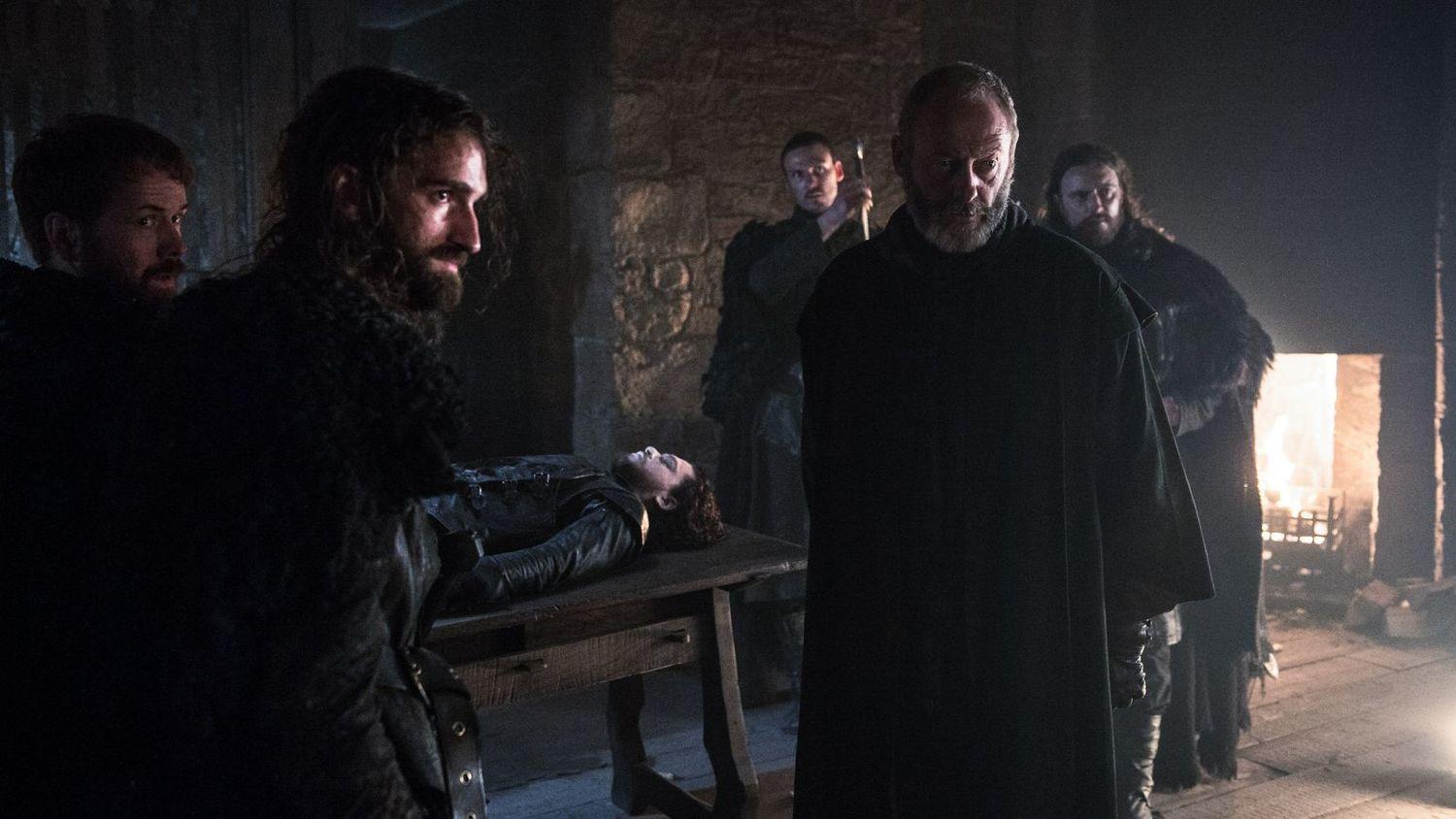 Catelyn’s bastard son, the one she notably “refused to love,” and went north to The Wall to prove his worth, lies dead in the snow, having been stabbed by the traitorous Alliser Thorne, Othell Yarwyck, Bowen Marsh, and Olly (@#$%@#[email protected]!!) at the end of the last season. Jon’s return was the worst-kept secret in Westeros during the off-season, a problem that would have been difficult to solve given the efforts by many to steal a still from shooting, but the producers probably could have been more adamant about his return as a corpse, something Kit Harington at least tried to do in interviews shortly before this premiere. In this episode, though, we get delayed satisfaction as we see Jon lying on a table while Davos, Dolorous Edd (getting his nickname for the first time) and a few others guard his body along with his loyal direwolf, Ghost, who we see (sadly) licking Jon’s hands as he lies in death. It’s unclear what Davos thinks his play is; he seems to agree with the notion that the traitors deserve death (and Thorne all but admits his belief drove him to this moment), but how that might be accomplished is beyond them, though they send Edd off to find Tormund and the Wildlings prior to the end of the episode. The eventual outcome – Jon returning to life – makes sense, given GoT had long slipped past its ability to shock people with death, so having someone become the boy who lived made sense. We just weren’t going to get such satisfaction this time. 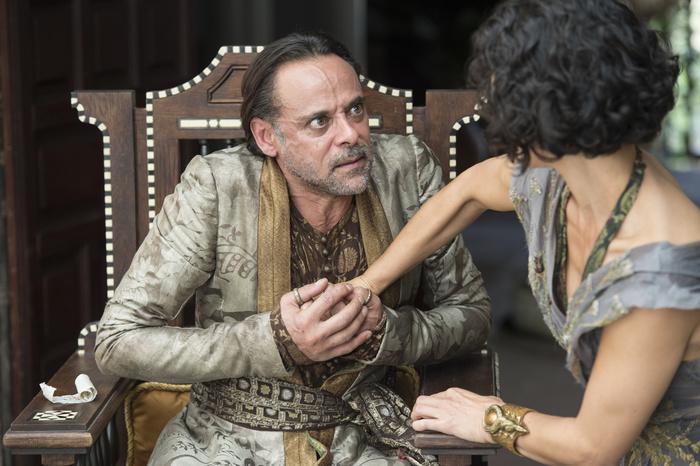 Oh, and the producers completely set fire to the Dornish storyline, getting rid of two interesting characters (Doran and Areo Hotah) and one lame one (Trystane Martell). Was this the plan all along? It’s not clear; Alexander Siddig has hinted that perhaps it wasn’t. It’s hard not to believe he, along with Hotah, got the short shrift here, but, perhaps the less said, the better.

Introductions: Maester Wolkan; Khal Moro, Akho and Qhono, and their “High Fidelity”-style “Top Five Awesome Things About Being a Dothraki” conversation, which of course Khal Drogo would have never tolerated; Khal Moro’s “It Is Known” wives

Deaths: Trystane Martell, Doran Martell, Areo Hotah, the “Dornish storyline,” the credibility of the person who thought a 300-pound man would drop dead from a three-inch dagger in like, seven-tenths of a second (seriously, Doran writhes for a longer period of time after taking one in the chest), several Bolton redshirts, “Stannis Lives” truthers

Beautiful Death for The Red Woman, by Robert M. Ball 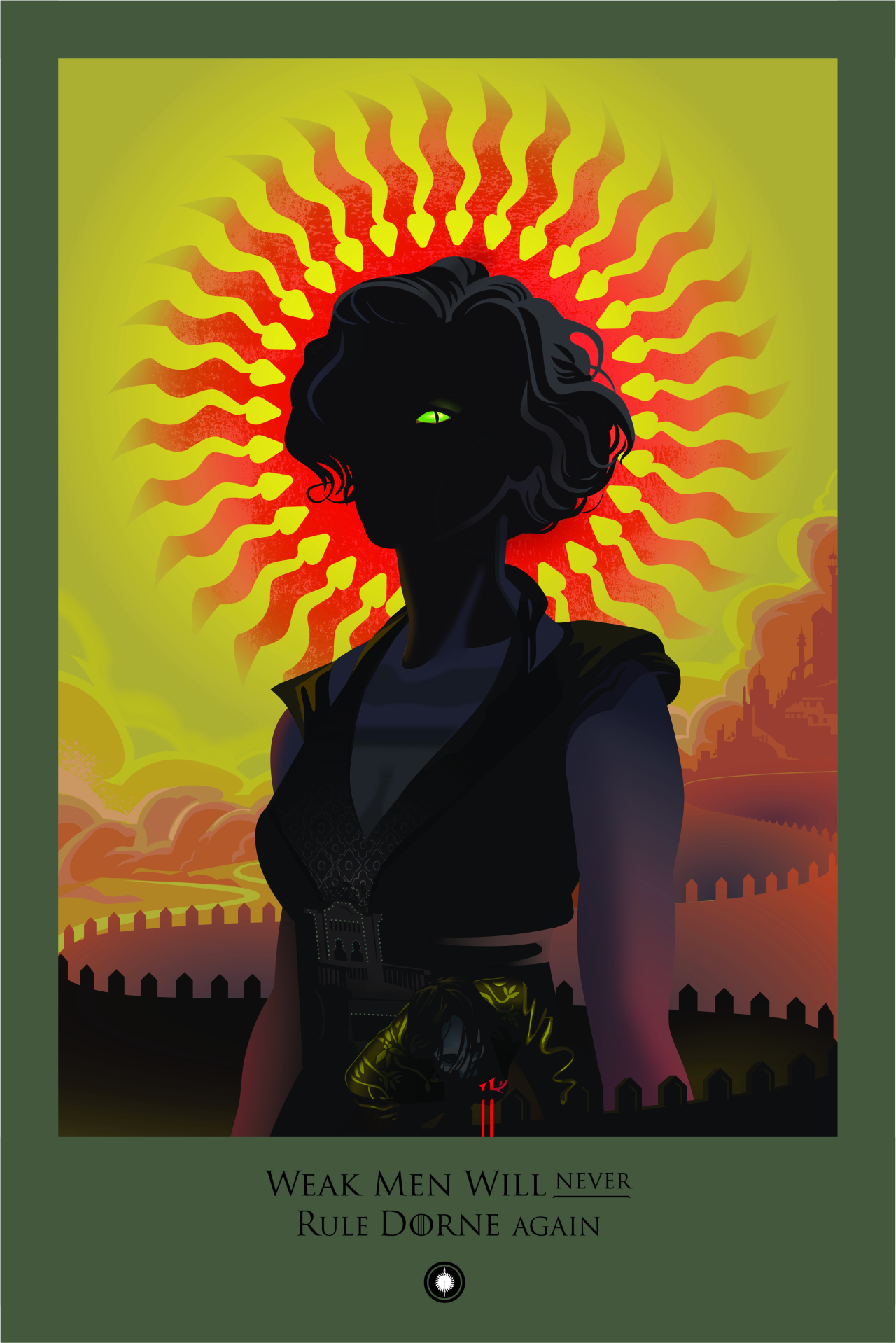