Sound Designer Paula Fairfield discusses creating Drogon's voice and teases a thrilling season 7 at Con of Thrones | Watchers on the Wall | A Game of Thrones Community for Breaking News, Casting, and Commentary

One of the major highlights of Con of Thrones was Zack Luye and Hannah Panek’s interview with sound designer, Paula Fairfield. Over the course of their hour-long conversation, they discussed the ins and outs of the oft-underappreciated art of sound design, the need for representation behind the camera and Fairfield’s thoughts on seasons 7 and 8.

It may come as little surprise that one of the most challenging aspects of Fairfield’s job on Game of Thrones is designing the voices of the dragons. On the one hand, Fairfield believes strongly in using real animal noises to create the sounds of mythical creatures, for fear that they won’t have “a soul” otherwise. On the other hand, dragons need to sound unlike any other animal we’ve ever heard before. Fairfield described her process of combining several animal noises to create the dragons’ roar but said that in more intimate moments, less is more. One task she found particularly challenging was coming up with the sound that Drogon makes during his brief reunion with his mother in the season 5 episode, “The House of Black and White.” She eventually took inspiration from dog, Angel (as she often did before Angel passed away last year) and used the faint nasal whistle that Angel would make during their cuddliest moments together to emphasize the intimacy of that bittersweet meeting. 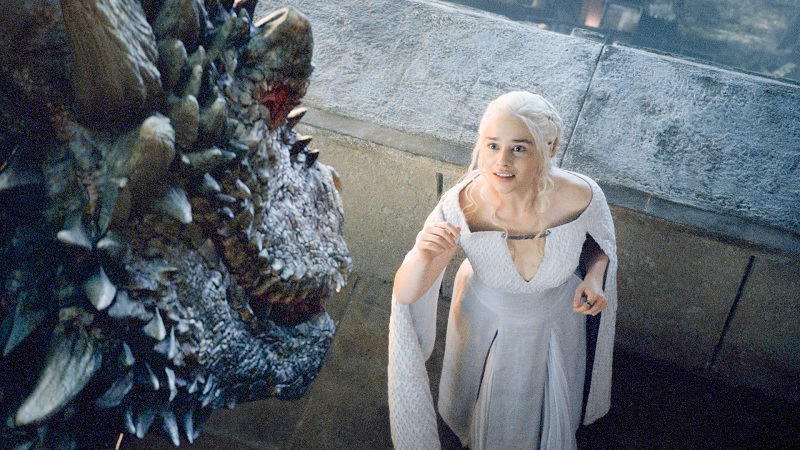 Drogon, Rhaegal and Viserion helped Fairfield get through a very difficult time in her personal life, as her start on Game of Thrones coincided with the deaths of her father and sister. In the midst of that darkness, she found catharsis in dragons. So perhaps it’s easy to understand how Fairfield can empathize with Game of Thrones‘ most devoted fans.

She spoke about the upcoming two seasons with the enthusiasm of an avid viewer and speculated that, though we’ll be getting fewer episodes in the final season, each individual episode may be longer – possibly even feature length – to compensate. Though it’s difficult not to be excited by the prospect of a final Game of Thrones season that is essentially comprised of six movies, Fairfield’s words were by no means a confirmation. Fairfield didn’t cite a source for her statement and, regardless of what D.B Weiss and David Benioff are currently planning, an awful lot can happen between now and production for season 8. Would elongating each episode to a 90-ish minute run time be amazing? Of course. Would it make sense? Maybe. Will it happen? We’ll have to wait and see.

What’s more concrete to go on is Fairfield’s palpable excitement for the imminent new season. She admitted to Zack and Hannah that she had several “heart attacks” watching the early footage for season 7 … partly because of the mountain of sound design work that she knew lay ahead of her but also because, apparently, season 7 really is that thrilling.

According to Fairfield, there is going to be a lot of dragon action.

Fairfield also addressed the sticky gender politics of sound design. When asked for advice by an aspiring sound designer in the audience (whom she offered she speak to privately afterwards), Fairfield was upfront about the obstacles she’s faced as a woman in such a male-dominated field. She stressed the need for greater female representation in the industry, not because women are inherently better at sound design than men, but because men and women hear things differently and, consequently, approach sound design differently.

In light of all the hardships women continue face both in front of and behind the camera, Fairfield is making great strides for women in sound design. The fact that a hit television show like Game of Thrones has had a female sound designer since season 3 will, hopefully, make it that much easier for young women to break into the industry.

Thank you to David Rosenblatt aka SirSquinty for his assistance compiling Paula Fairfield’s talking points and making edits for this article.