Game of Thrones raked in the Emmy nominations this year, dominating the technical categories. We’ll see if they bring home the awards tonight, as the Emmy Creative Arts Awards ceremony takes place at the Nokia Theater in Los Angeles.

The ceremony begins at 4PM Pacific Time, 7PM Eastern. The awards show won’t air for another week, but we’ll be posting the winners tonight, as soon as the information becomes available!

Update! The categories have been announced, and Game of Thrones has won four Emmys tonight.  Congratulations to GoT on their big wins in Art Direction, Costuming, Visual and Special Effects and Prosthetic Makeup!

The Creative Arts categories that Game of Thrones competed in include:

Guest Actress in a Drama – Diana Rigg, lost to Allison Janney of Masters of Sex

Winner! – Art Direction For A Contemporary Or Fantasy Series (Single-Camera) 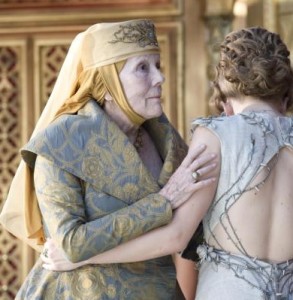 Stunt Coordination For A Drama Series, Miniseries Or Movie, lost to The Blacklist

Winner! – Costumes for a Series (“The Lion and the Rose”)

Hairstyling for a Single-Camera Series (“The Lion and the Rose”), lost to Downton Abbey

Makeup For A Single-Camera Series-Non-Prosthetic (“Oathkeeper”), lost to True Detective

Winner! – Prosthetic Makeup For A Series, Miniseries, Movie Or A Special (“The Children”)

Sound Editing For A Series (“The Watchers on the Wall”), lost to Black Sails

Sound Mixing For A Comedy Or Drama Series – One Hour (“The Watchers on the Wall”), lost to House of Cards

Good luck, tonight, to everyone involved with the show!