Game of Thrones casting a Darkstar figure, Stalwart Shield, and several more roles for season five | Watchers on the Wall | A Game of Thrones Community for Breaking News, Casting, and Commentary 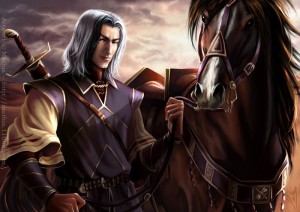 The major additions for Game of Thrones season five were unveiled Friday at San Diego Comic Con, leaving some to wonder if that was it for new roles this year. But of course, there are several small parts in every season of the show, and fresh info has to come to us at WatchersOnTheWall.com, filling us in on more of what we can expect to see next year.

According to our sources, several roles are being cast currently, including an unnamed character that matches the description of someone familiar to readers of A Feast for Crows.

The information below contains light spoilers!

The show is seeking an actor to play a thirtysomething Dornish man described as confident, fierce and charismatic and most notably, skilled with riding horses. They’ll have fight scenes that take place entirely on horseback. The character interacts with the main cast in an important sequence, and is considered someone you wouldn’t want to tangle with.

Based on the details provided, it sounds like this is an equivalent to the book character Ser Gerold Dayne, aka Darkstar. The actor is only needed for a week’s worth of filming, suggesting that the character’s part is considerably reduced compared to the book counterpart.

Update 7/27, 10:25: I’ve just heard back from another source who is confirming that the Dornish horse rider, despite the resemblance to Darkstar, is just a minor character and not meant to be him.

Three more characters give hints as to what Daenerys Targaryen and the denizens of Meereen will be encountering in season five. The show is casting for a young man to play a captured vigilante, referred to as a “Son.” It looks like the Sons of the Harpy storyline will be heating up next year.

We’ll also be seeing a young Unsullied fighter who likes to spend time at Meereenese brothels, enjoying the affections of the women in his own way. The character is unnamed, but from the description is a clear equivalent to the character of Stalwart Shield, from A Dance with Dragons. Along with the Unsullied man, the show is searching for a woman to play the part of the brothel worker comforting him.

We’ll be seeing a ship’s captain in two episodes next season, working with a main cast member. The role is quite small but the captain is carrying an important passenger.

Intriguingly, WatchersOnTheWall sources also tell us that Brienne will encounter an elderly serving woman who becomes her ally in dangerous territory. The character will appear in a few episodes, though the role is small.

The last role our sources came across was particularly interesting in how specific it was, and yet still unnamed. Game of Thrones is searching for a man in his fifties, required to be thin and having a long, thin face, to play a character with financial cunning and steeliness.  The character has several scenes over two episodes.

Sue the Fury: There’s a lot to speculate on here. The Brienne business is curious. It sounds like the show is inventing something for her to do, which is not that surprising given the way she’s running out of chapters from AFFC already. As for the Thin Man, I was wondering if he was another Iron Banker or possibly the ship-insurance salesman that Arya encounters in A Dance with Dragons. Or something else entirely. As for Darkstar…I think a limited Darkstar is probably a very good thing. Because Dorne is very sunny, and he is of the night, okay?

*Note: The spoiler button on the toolbar is not functional at the moment. Spoiler coding should be entered manually for the time being. Instructions are in the FAQ. Sorry for the inconvenience!*