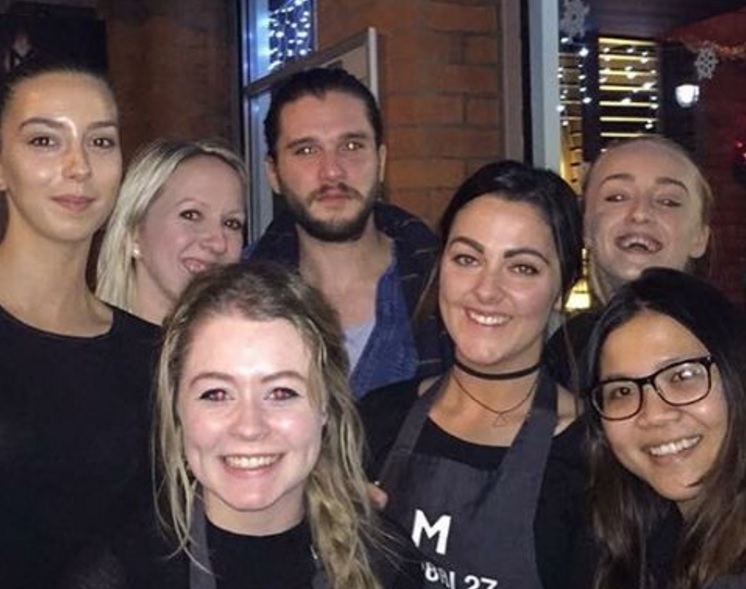 While Game of Thrones wraps location filming in Spain, the cast and crew has been hard at work back in Northern Ireland. The season seven set created at Wolf Hill Quarry has been home to filming these last few weeks, and involves multiple major cast members from the show. Spoiler reports have given us a glimpse of what the icy site is being used for, and we’ve had several previous cast sightings confirming early rumors about who might be involved with this northern action sequence. Director Alan Taylor has been seen with the cast around Belfast, confirming reports that the scene is intended for episode 6 of the new season. The latest sightings from the city involve some of the actors spotted before, and we can add another name into the mix, confirming a season seven return.

A handful of GoT cast members were out to dinner yesterday at Mumbai 27, a restaurant in Belfast, and ran into several fans. Luckily, the fans shared photos of the encounter. In addition to meeting Kit Harington (above), people also met Iain Glen, Kristofer Hivju…and Joseph Mawle.

Benjen Stark was rumored to be returning for a brief season seven role, and now with Mawle’s sighting, we finally have proof! Given who he’s hanging around with, can we expect to see undead Benjen in the quarry-based action? It seems likely.