Game of Thrones Memory Lane 309: The Rains of Castamere | Watchers on the Wall | A Game of Thrones Community for Breaking News, Casting, and Commentary 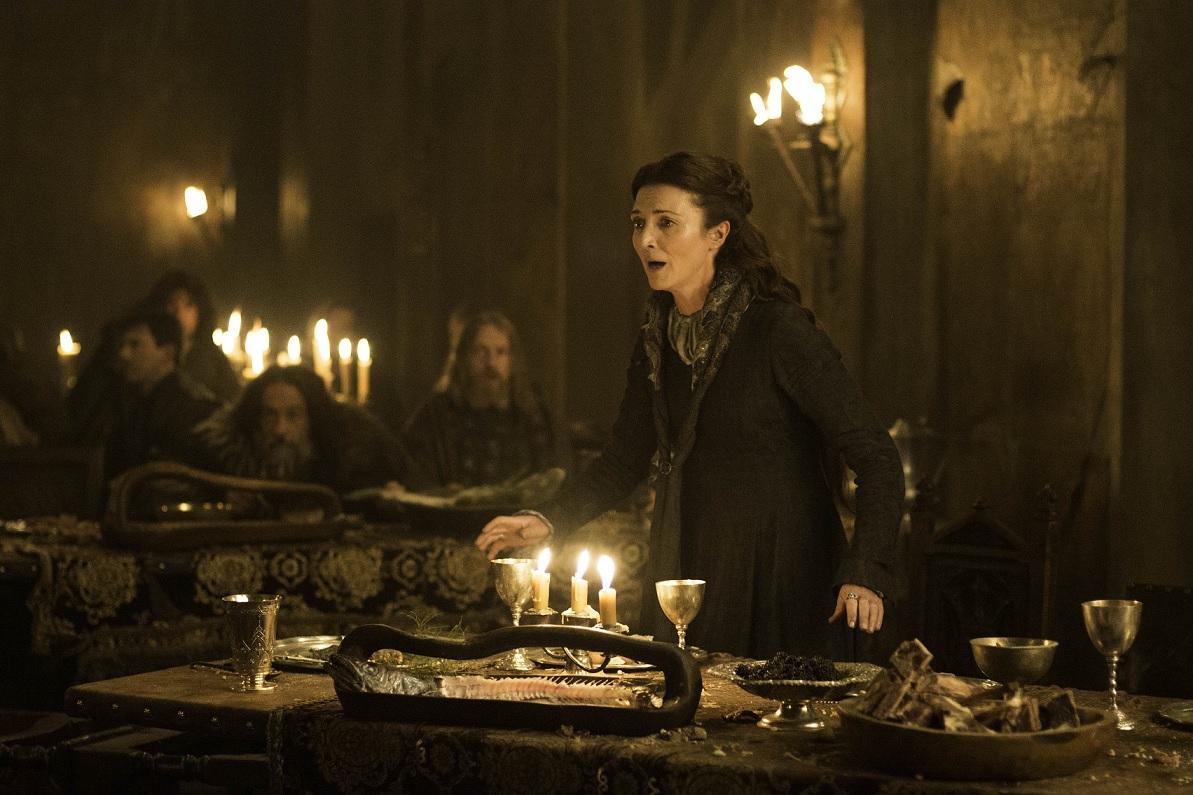 A Game of Thrones episode as pivotal as “The Rains of Castamere” requires a lot of lovin’ and a lot of attention. It stands as the dividing point of the series- everything is before or after the Red Wedding. Today we’ll be enjoying this incredible episode with three posts: after this one, we’ll have a fun look back at the fan reactions to the scene that broke the internet, and then we’ll cap the day off with Marc N. Kleinhenz’s Anatomy of a Throne analyzing the book-to-screen adaptation for the episode. Starting us off with our walk down Memory Lane- please welcome back Greatjon of Slumber! – Sue the Fury

Game of Thrones as a television show was already well accomplished by the time it reached the penultimate episode of season 3; its ratings were strong, it was hailed for close attention to character, acting, and engaging storyline, was both a critical and cultural favorite, and had tons of fans among both fans of the novels and those who discovered it via HBO. But it was this episode – more commonly known as “The Red Wedding,” that turned it into a phenomenon.

With that in mind, there’s also been a hell of a lot written about “The Rains of Castamere,” and justifiably. It remains one of the show’s most critically acclaimed episodes, but the litany of brutal deaths – including the shocking murders of three primary characters – gives it a “water cooler” appeal that is probably only rivaled by “Hardhome” and a few others that feature deaths of iconic characters.

Because so much has been written about this episode, this time on Memory Lane we’re going to try a slightly different approach, with a series of somewhat short (and shorter) observations about this hour of television. But first, let’s start with the text – not George R.R. Martin’s text, but William Shakespeare. 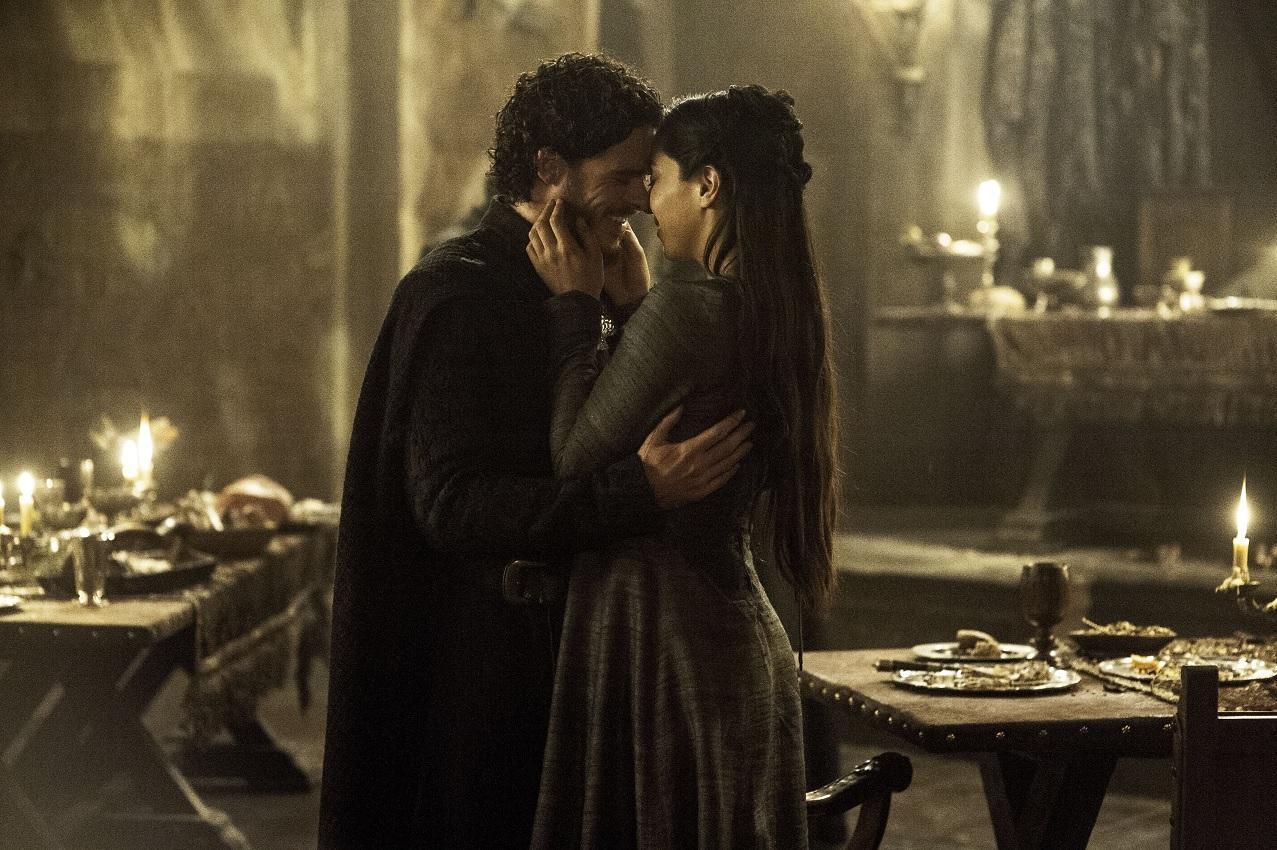 It is said that Shakespeare’s Romeo and Juliet could have as easily been a comedy as a tragedy. The banter and chest-beating among the younger set – Romeo’s friends and Tybalt’s entourage – is rather light-hearted in the early setpiece of the play, the Capulets’ party, where Romeo first encounters Juliet. And in fact, the play only reveals its true nature as a tragedy when Mercutio is killed at the open of Act III – which motivates Romeo to kill Tybalt, and from there, things go downhill. The same can be said of this episode (not that it’s a comedy, but that it for a time seems to be headed towards a relatively peaceful resolution). Walder Frey gives us several moments of humor, including the cringe comedy of trotting out about a dozen children and grandchildren to accept Robb’s apology for breaking his vows; his raised eyebrow later at Robb when everyone gets a good look at Edmure Tully’s bride, Roslin Frey, who is nowhere near as homely as most of the Frey offspring, and of course the nutty bedding ceremony. Until the doors close and “The Rains of Castamere” is heard, the episode’s true intentions have not been revealed. Again, this is Game of Thrones, so we have certain expectations – but that’s our past knowledge only.

This episode concludes the unstated, but crucial, link between the characters of Roose Bolton and Talisa Maegyr. The showrunners were careful – and brilliant – in their subtle means of tying Robb’s slow break from his bannermen and union with Talisa throughout seasons two and three, expressed by visually connecting Roose with Talisa in several instances: 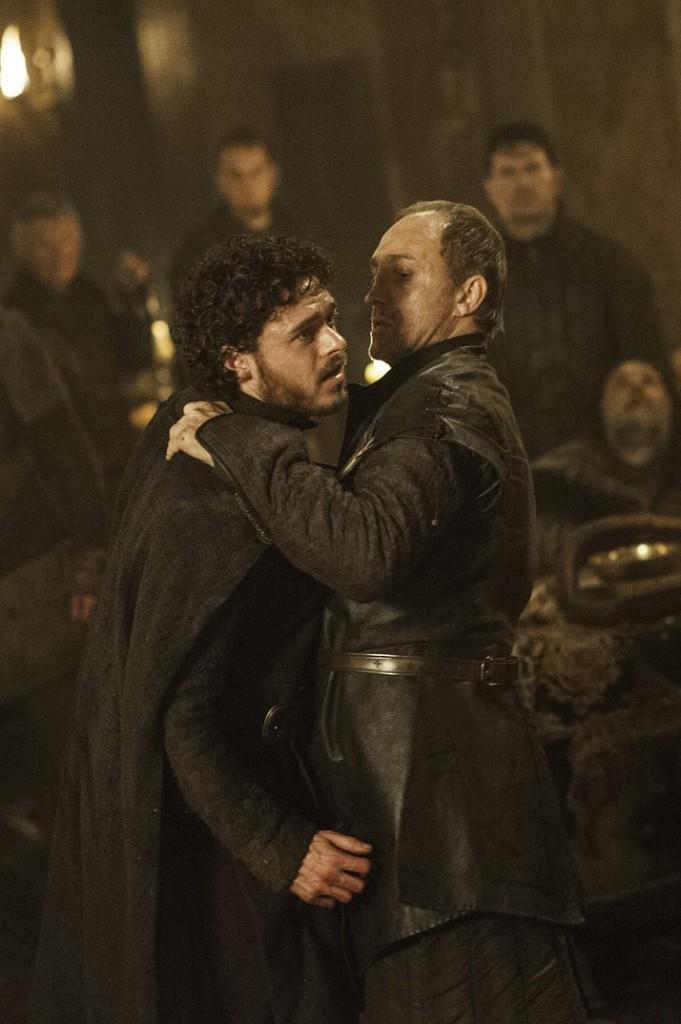 Until now, Roose Bolton has mostly been a disapproving bannerman. In “The Rains of Castamere,” we learn much about Bolton with a few nimble gestures that involve very little dialogue – his disdain for alcohol, his shrewdness, exemplified by his decision to marry the fattest of Walder Frey’s daughters to enrich himself, and his depraved sense of humor, as he lets Catelyn in on the plot just before it commences, by glancing to his sleeve, which reveals his chain mail hidden under his clothing. It’s a showcase for Michael McElhatton, one of the show’s strongest assets. 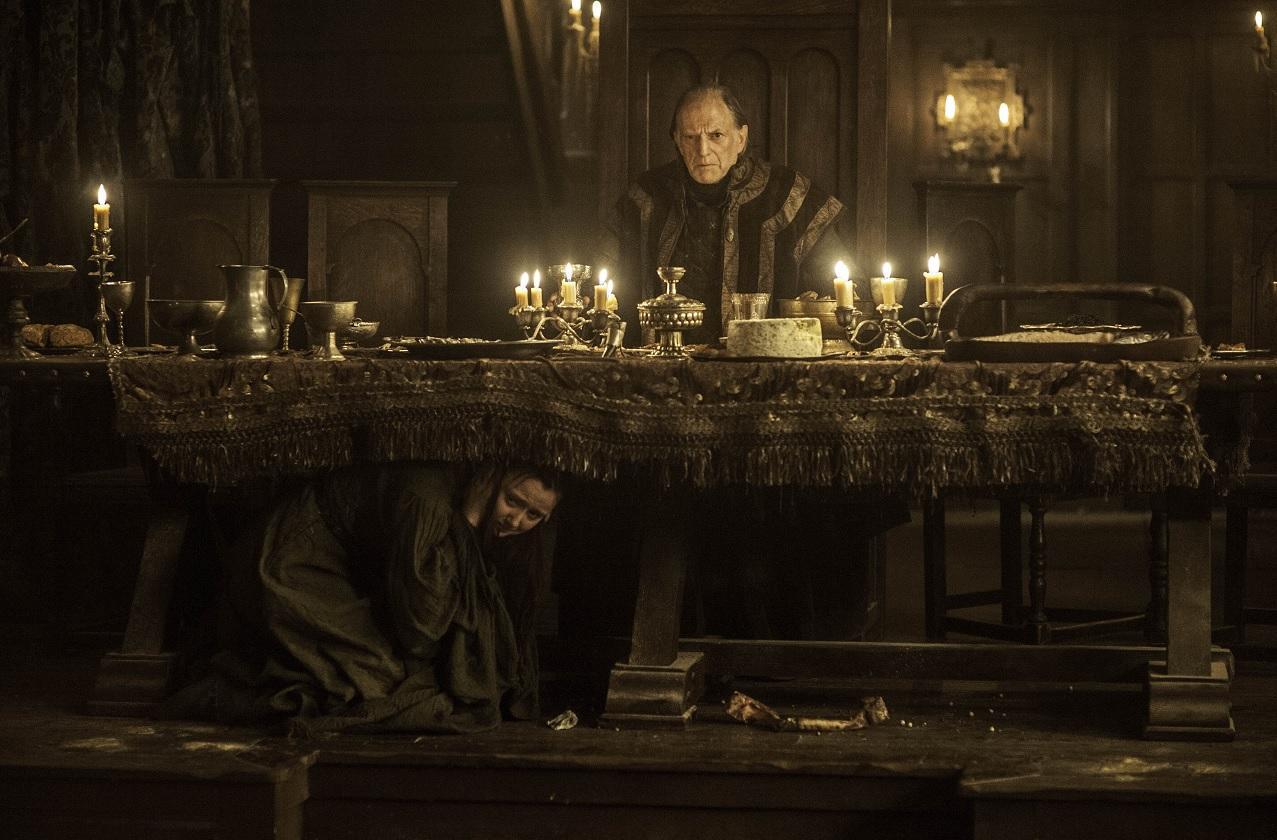 Speaking of assets, the episode’s most valuable guest player, David Bradley, does tremendous work as Walder Frey, shifting between his own wicked sense of humor and his sense of wounded pride for having had a promise reneged upon by a young man who he suspects sees him as less worthy of his respect. Classism is never far from the surface in character motivations – and Walder Frey is rightly aggrieved, given he has two assets he can offer: the crossing, and his daughters and granddaughters. Bradley is letter-perfect in this role, even just in the reaction shots to the slaughter that show him lasciviously continuing to eat while his men eliminate all of the nobility in the room.

Oddly enough – and this is the only time I’ll refer to the books – Bradley is far younger than the Walder Frey described in the book; he was 71 when the show aired, and Frey, in the books is said to be 90 years old. He also seems to lack one of the defining physical characteristics of the Freys, the “weak chin,” which Tom Brooke, who plays Lame Lothar (he’s the one who stabs Talisa), and Tim Plester, who plays Black Walder (he cuts Cat’s throat), do possess, and it’s nice to see that bit of description make its way into the casting. The costumers seem to have also decided to give most of the Freys what we should call “schmuck with earflaps” hats, another common visual cue.

This is, of course, the final episode for Richard Madden, Michelle Fairley, and Oona Chaplin. The first two get a scene at the beginning that seems designed, in part, to answer criticism that the show had removed much of Catelyn’s intelligence and made her too passive. But Robb rightly acknowledges Cat’s advice not to trust Theon Greyjoy, and he clearly has also made a mistake in marrying Talisa, just as she was arguably mistaken in releasing Jaime Lannister.

It’s hard to overstate how great Michelle Fairley is in this episode. Her final scene is full of white-hot fury, and her blood-curdling scream to close the episode is hard to forget. After she slits the throat of Joyeuse Frey, you can see the life has left her, and Black Walder’s murder of her is almost a formality.

After she falls, the show runs the credits with no music at all. It’s as if it wanted you to wrestle with what you’ve just seen without any relief from an orchestral score to calm your nerves. 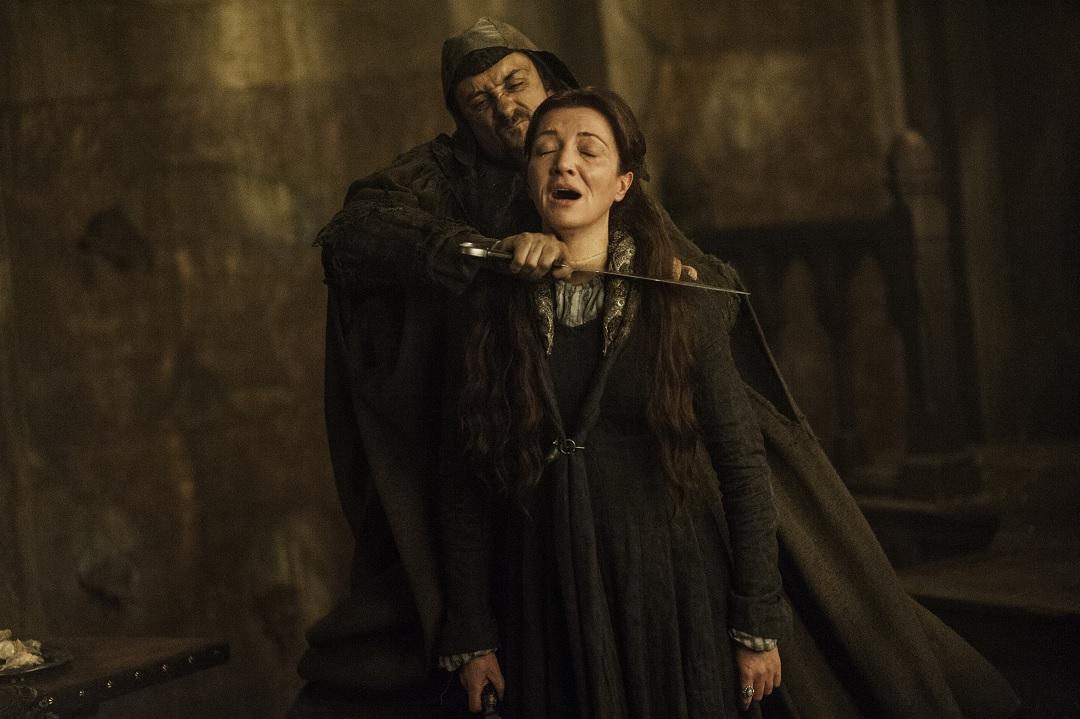 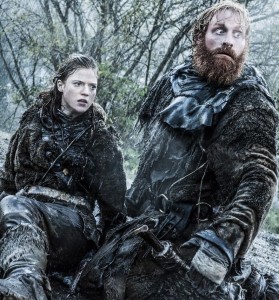 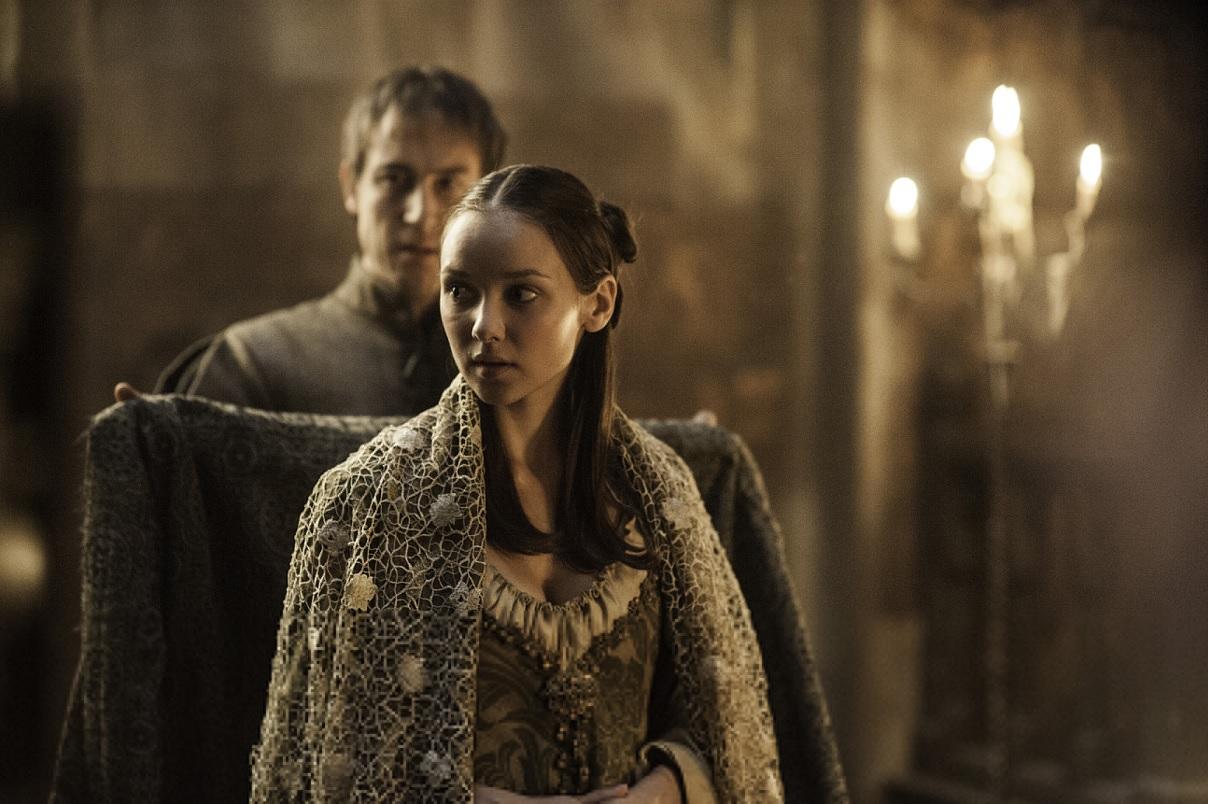 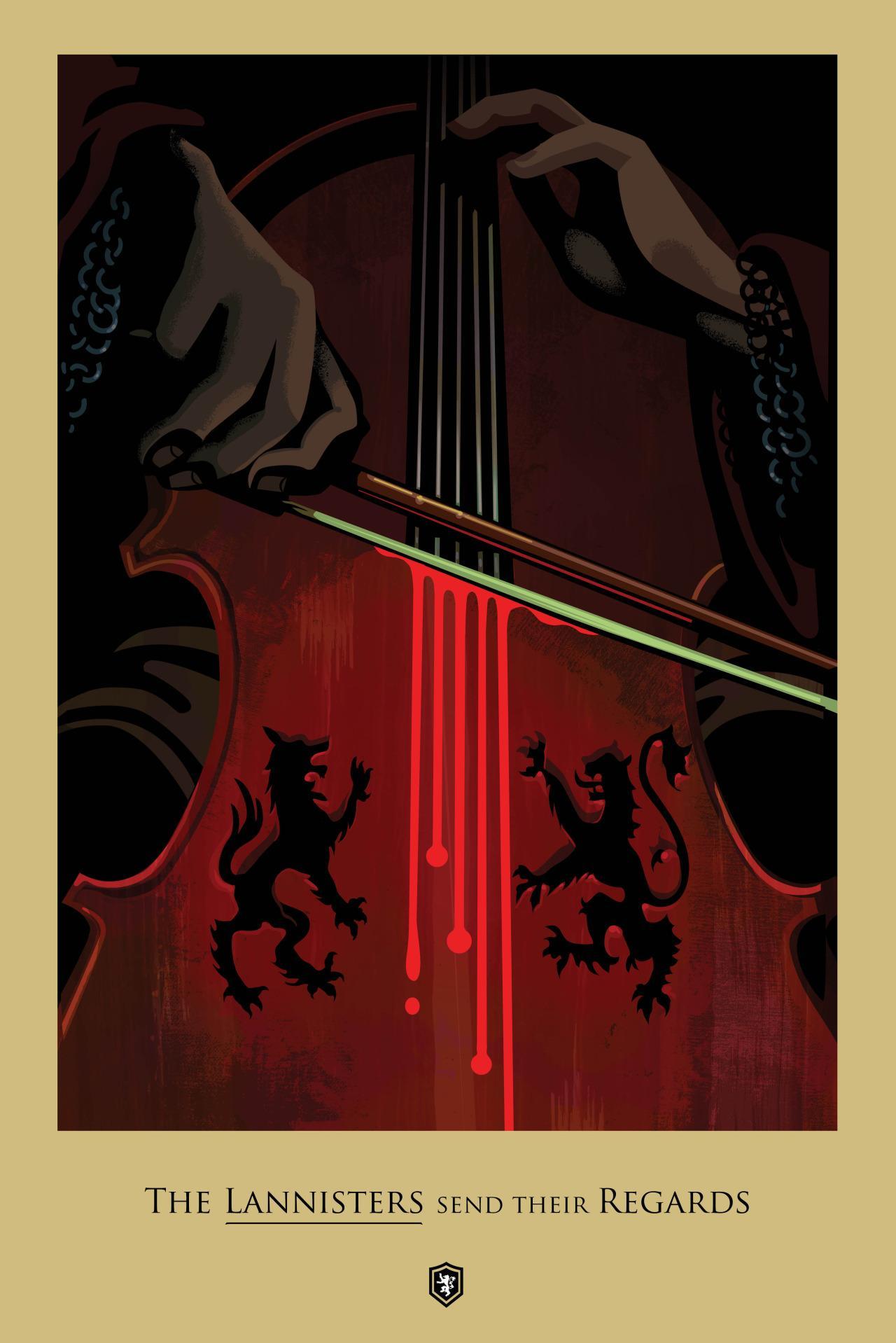