Game of Thrones Memory Lane 104: Cripples, Bastards, and Broken Things | Watchers on the Wall | A Game of Thrones Community for Breaking News, Casting, and Commentary 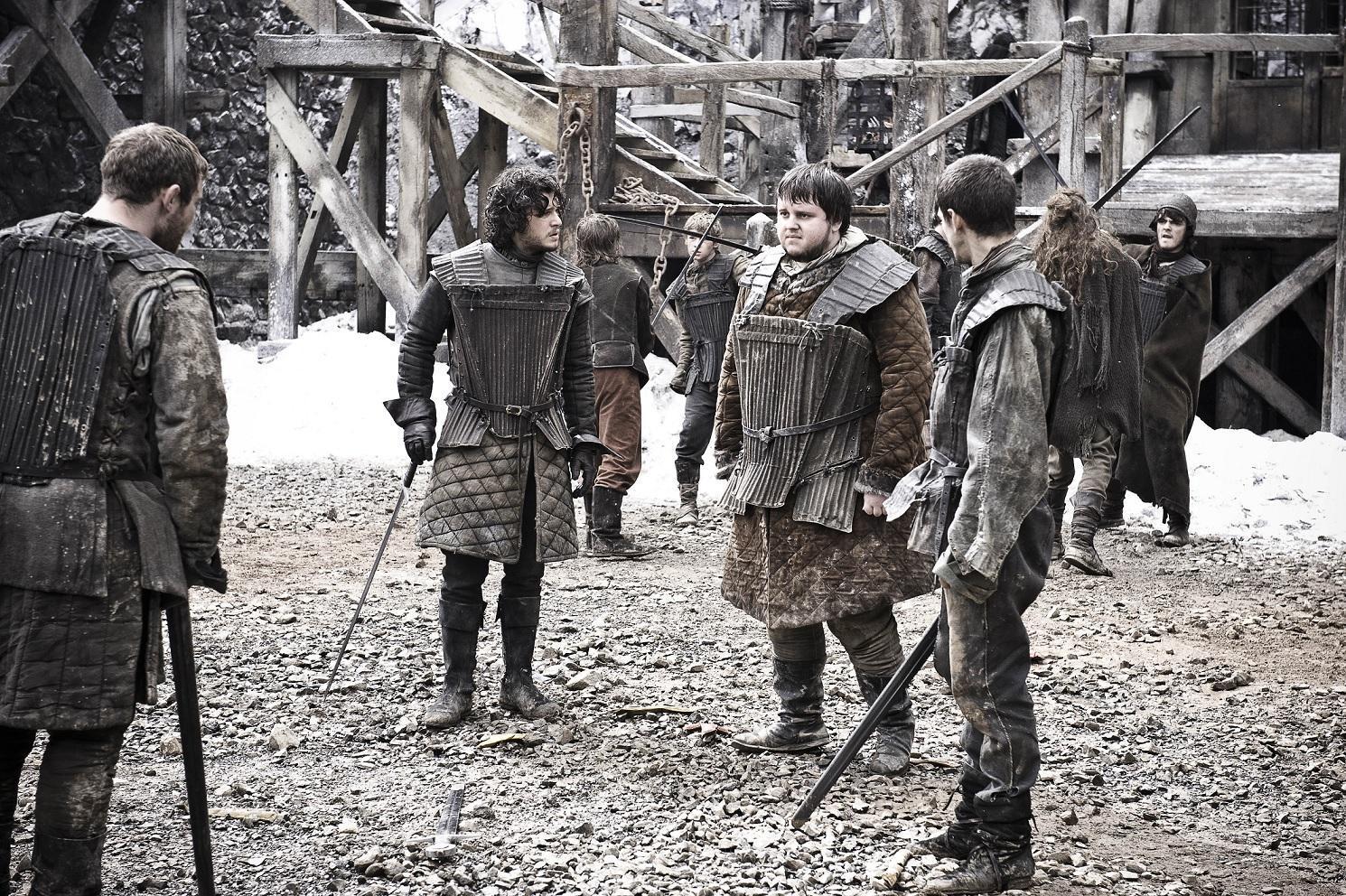 “Cripples, Bastards, and Broken Things,” written by Bryan Cogman and directed by Brian Kirk, is very much about what it says on the tin. Jon Snow takes the lead at the Wall, Ned’s hunt for the truth brings him to another young bastard, and Bran has woken up to a world that’s now regarding him as ‘crippled’ without his legs.

The title refers to a quote from Tyrion, who has a tender spot in his heart for the lot. He’s been treated as something of a cripple and a broken thing himself, due to his stature. His bitter experience in hardening himself and his skills at adapting his physical environment lead Tyrion to offer advice and design plans so that Bran can hope to ride again.

The episode is an important beginning for the boy. Not only does he begin to shed his hopelessness, his mystical journey starts here with the Three-Eyed Raven’s first appearance in his dreams. Coming into season 6, with the return of Isaac Hempstead-Wright and the new casting of Max von Sydow as the Three-Eyed Raven, this arc is hugely important for the future of Game of Thrones. 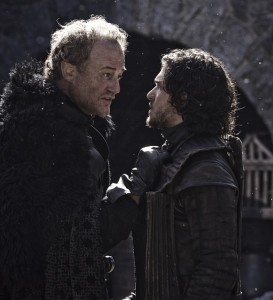 The episode is rich with establishing moments that are still bearing fruit years later. Jon earns even more loathing from Ser Alliser Thorne when he befriends a young man who seems broken himself initially. What many see as compassion in Jon, Thorne sees as a weakness that can hurt others. The philosophical difference will resurface when Jon tries to save the wildlings in season 5.

When the new recruits spar in the courtyard, Samwell Tarly lays down on the ground and turtles, long past trying to hit back. Jon and Sam bond later over growing up unwanted, no matter that Sam was his father’s heir. When the boys share personal stories about their (lack of) experience with women, it’s then that the new friendship cements, and we see John Bradley’s charm and humor break through.

Poor Jon. He never knows anything. And that fast, John Bradley won a spot on my favorites list. Cogman has always been great at writing Sam, from the first.

Interrupting the fun, Owen Teale as Thorne delivers a chilling monologue about ranging north of the Wall. His growling of  “Come the winter you will die like flies” still sends a chill up my spine. Teale is the perfect example of a performer who has elevated a character from the books. He’s more than simple bile; he has texture and he even has his heroic moments in later seasons. No one is black and white, in Game of Thrones.

(Maybe the Mountain. I won’t argue there.) 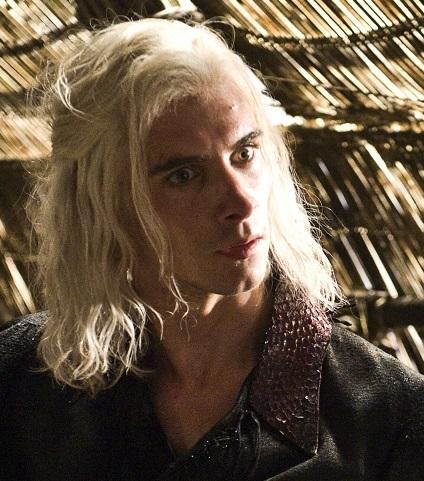 Another actor who proved to me in this episode- and I recall being shocked at this realization back in season 1-  that his character had surpassed the book version is Harry Lloyd as Viserys Targaryen. Daenerys and her brother are at odds throughout the episode, with Viserys ultimately lashing out at Doreah before turning his rage to his sister.

Emilia Clarke matches Lloyd well in the scene where she fights back physically against the brother who has tormented Dany her entire life. It may seem trite to call it empowering but it doesn’t feel cliched. It feels like the truth- Daenerys strikes him down, and it’s magnificent, from her rage to the wounded and baffled look in Viserys’s eyes. He was a selfish monster but a complex one, played by a gifted actor.

Viserys was never more than an annoyance I wanted to see gone in the book A Game of Thrones. Watching the TV series, I began to think, “Wow, I’m really going to miss this performance and I’m sort of sad we’re only getting a couple more episodes until that one suspiciously titled ‘A Golden Crown.'”

There’s another dispossessed child who gets a lot of play in “Cripples, Bastards, and Broken Things”- the Starks’ ward, Theon Greyjoy. As Tyrion points out, he’s really a hostage paying courtesies to the people who put down the Greyjoy Rebellion, killed his older brothers, and are keeping him hostage for his father’s good behavior. Many have condemned Theon’s later choice to side with his birth family, but the Lannisters are accurate in that he isn’t truly one of the Starks.

George R.R. Martin discusses the reality of Theon’s situation as a hostage living among his father’s enemies in Winterfell.

It’s interesting that the Lannister sons have Theon’s number this early- both Jaime and Tyrion spot that he is a problem. “It was like seeing a shark on a mountaintop,” Jaime says to Jory Cassel. Though Tyrion is considered the smart one, Jaime shows his cunning often enough.

Elsewhere in Westeros, Littlefinger’s manipulations bear fruit, and Catelyn makes a mistake with long-reaching repercussions when she arrests Tyrion. (Hey it’s Bronn at the inn! Remember when everyone lost their shit because they hired the guy from Robson & Jerome, only he turned out to be everyone’s favorite character on the show! Good times.) This is what happens when we trust anything Littlefinger says.

In King’s Landing, Ned’s CSI investigation about Jon Arryn’s death leads him to suspect that something isn’t quite right. Littlefinger provides some useful info pertaining to Arryn’s former squire (Hugh, very suddenly knighted) and an armorer Ned may want to check out. He also warns him that not trusting anyone is the right call. (A good rule of thumb: never trust anyone who dresses like a Star Trek villain. Which would cover Littlefinger in this scene.)

Following up on the info leads Ned to a young man he realizes is one of Robert’s bastards. Black of hair and strong like his father. Definitely does not look like those skinny blond kids sitting in the castle with crowns.

The Tourney of the Hand opens and we’re treated to a gory death- it’s the newly knighted Ser Hugh of the Vale, with a chunk of wood in his throat, taking any information about his lord Jon Arryn to the grave with him.

At least Littlefinger had fun at the Tourney anyway.

Is that not what actually happened? I could’ve sworn. God he makes me uncomfortable in that scene.

Introductions: Samwell Tarly joins the Night’s Watch. Bronn takes Tyrion’s coin from the first moment. Hey, it’s Not-Rowing-Yet Gendry! We also meet Gregor Clegane #1, in the form of Conan Stevens. This is our first sighting of the weaselly Janos Slynt. Marillion the singer and the armorer Tobho Mott make their first appearances here as well.

Deaths: Hugh of the Vale, we hardly knew ya.  You think they used enough blood in that scene? Nahhh. The actor who played Hugh, Jefferson Hall, went on to do a longer stint on Vikings, and appeared recently in Star Wars Episode VII: The Force Awakens.

ASOIAF Freak-out: Baelish tells the story of the Hound’s burning, instead of Clegane himself telling it. It was one of the book-reading fandom’s early major outrages. You know, after Chair-gate, after Nikolaj’s-Nose-gate, after…never mind.

It was just after the airing of this episode that one of my favorite tumblrs came into being: ArrestedWesteros. Crossing Arrested Development with Game of Thrones turned out to be more fitting than anyone could have guessed. They both put the fun in dysfunctional families, after all.

Their take on Jon & Arya: 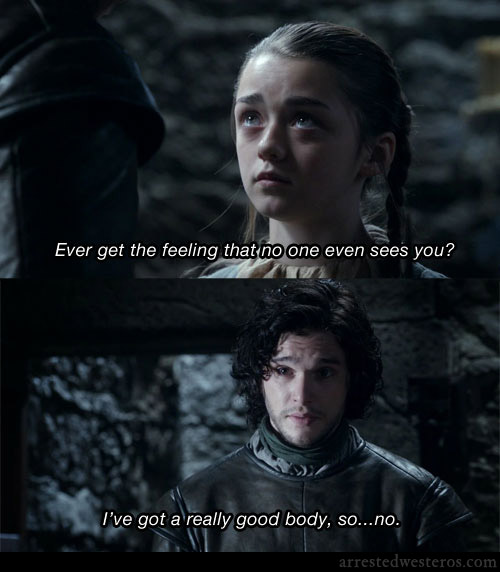 Some of the most recent entries might be a bit dark. Good. 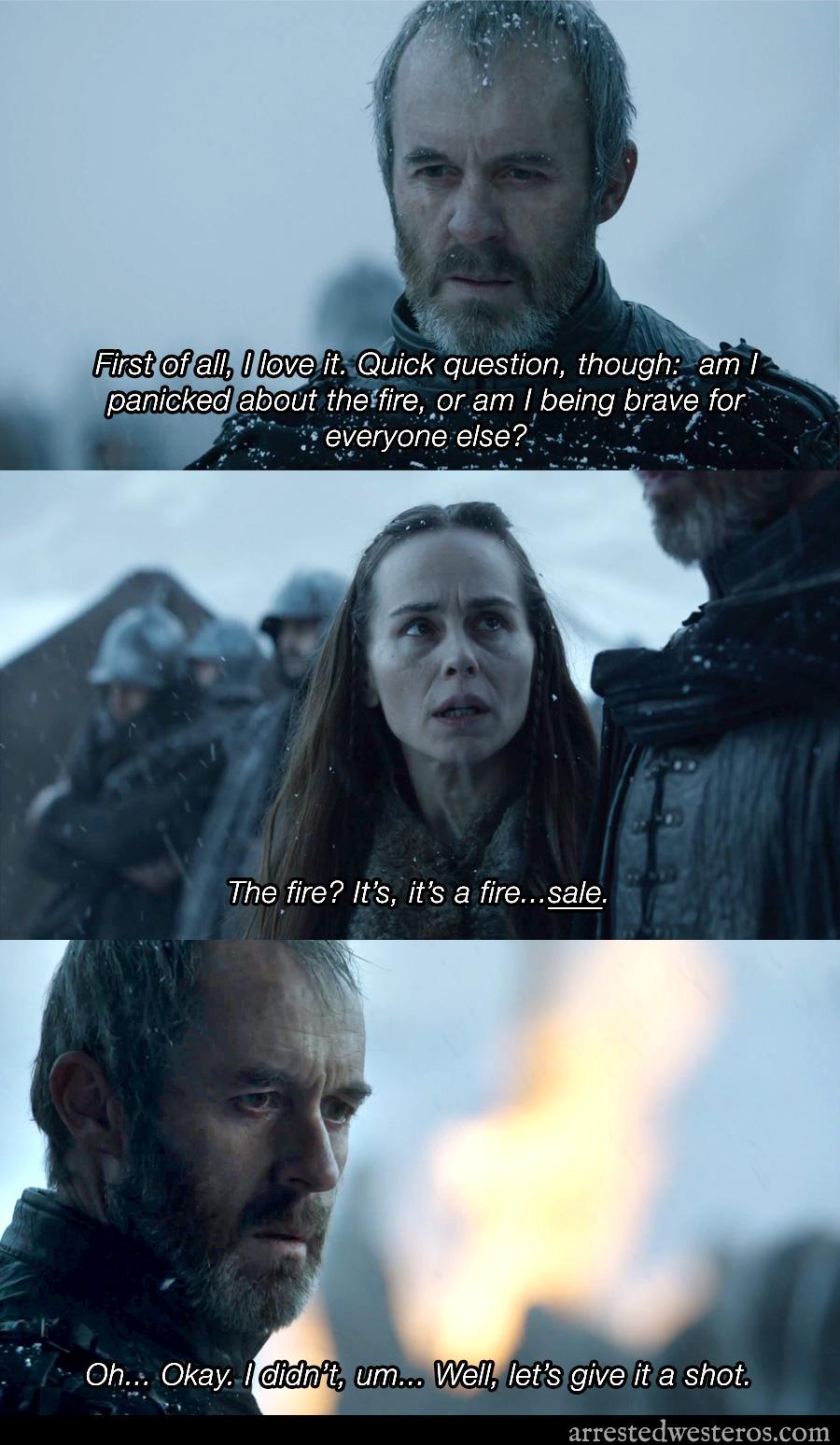 The episode inspired a rather apt use of Viserys’s question from the bath scene: 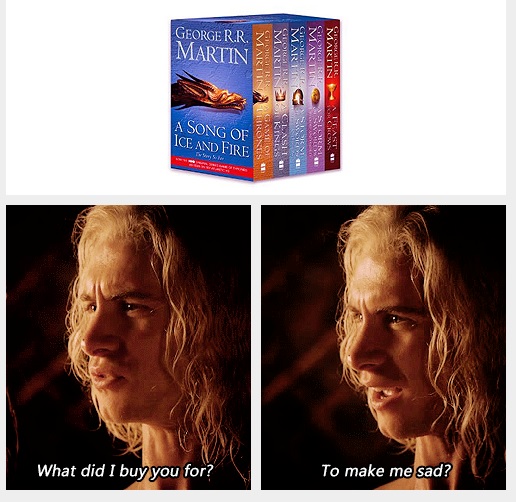 You can appreciate how wonderful the music of the show’s main theme is in this cover version. A fan-created performance strips the rousing symphonic arrangement down to an elegant, quieter piano version.

About Dothraki: grown men who really love horses. Reminds me of something…. 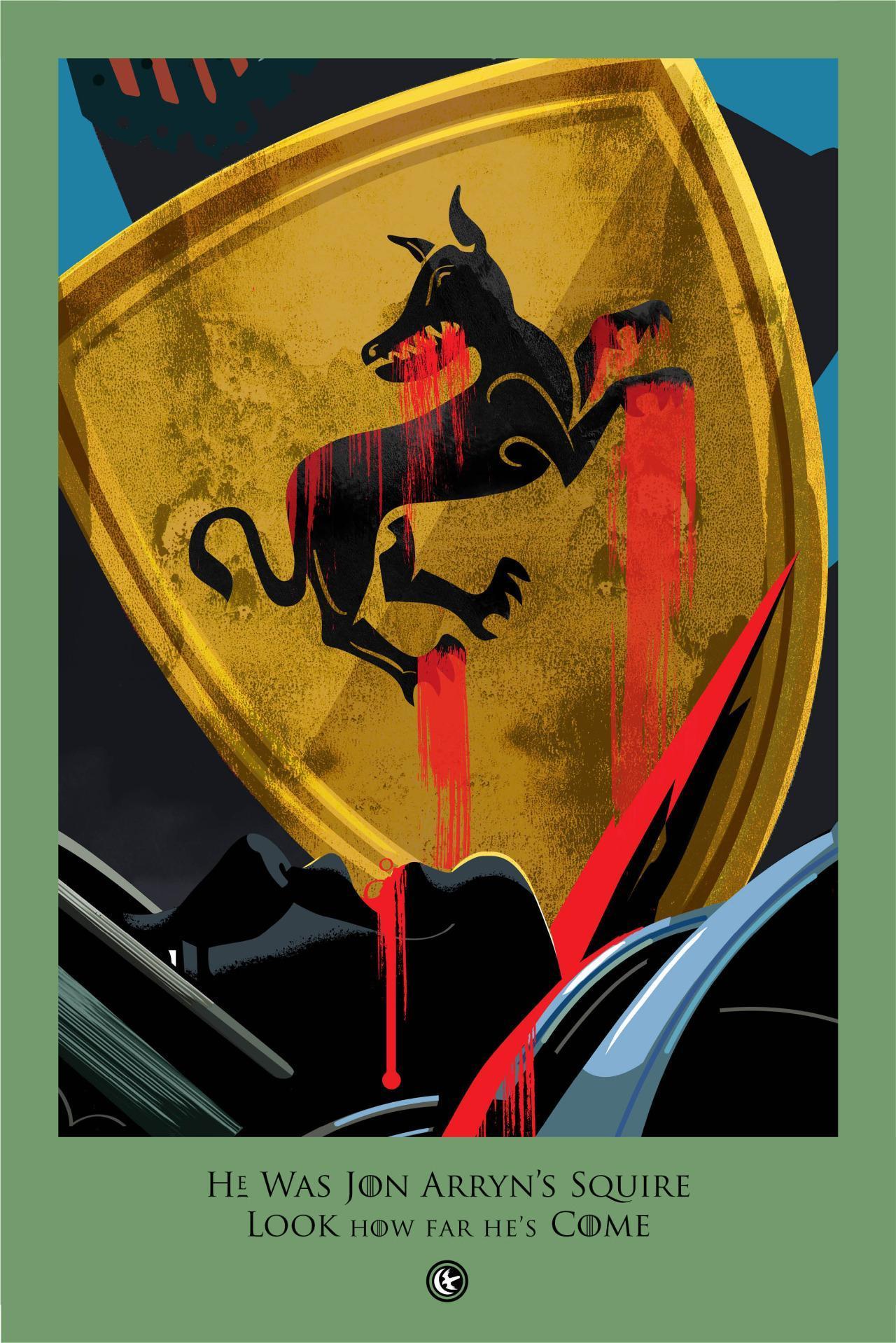 Tomorrow:  Oz will take you through the twists of “The Wolf and the Lion,” with the Tourney of the Hand continuing and Tyrion and Catelyn arriving in the Vale. With Lysa’s debut, everything gets weird. Which for Game of Thrones is saying a lot.