9th and Final Whisky Joins the Game of Thrones Single-Malt Collection: Six Kingdoms! | Watchers on the Wall | A Game of Thrones Community for Breaking News, Casting, and Commentary 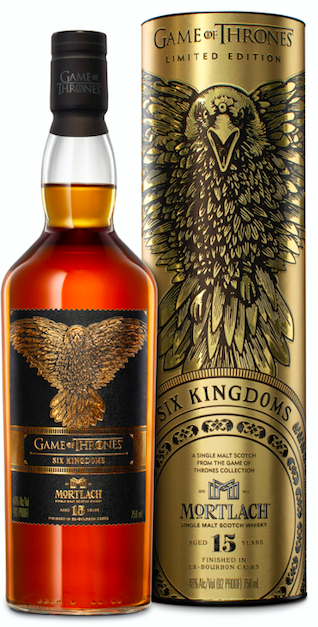 All good things must come to an end, including the Game of Thrones single-malt scotch whisky collection, but at least Diageo are doing it with style.

The beautiful presentation of the whisky reflects the new king. Encased in a metallic gold cannister, it features an intricate pen and ink drawing of the three-eyed raven.

As for the taste of the final whisky in the collection, according to Diageo: “Evocative of the past and crafted for the future, the Mortlach Single Malt Scotch Whisky Aged 15 Years, has been matured in first-fill sherry-seasoned casks and finished in American Oak ex-bourbon casks. The delicious whisky imparts a bold, smooth taste with notes of vanilla and spice befitting of those with a noble palate.” 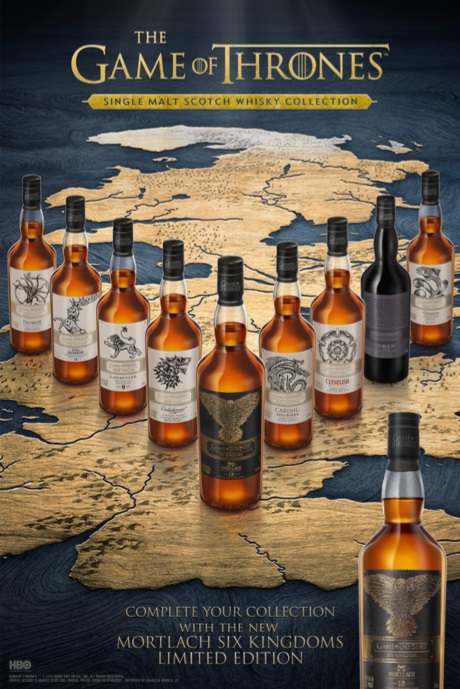 “Eight fantastic scotches toasted the coming of the final season of the show, and we now look back on the most captivating television show of all time and raise a ninth glass in celebration,” said Jeff Peters, Vice President, Licensing & Retail at HBO.

“We saw an overwhelmingly positive response to the launch of the Game of Thrones Limited Edition Single Malt Scotch Whisky Collection and as Game of Thrones fans continue to explore both the world of whisky and the world of Westeros, we are proud to introduce the final addition to the collection. Mortlach is one of our most sought-after super premium single malts, and seemed fitting as the perfect finale to complete the collection,” commented Kavita Agarwal, Diageo Global Brand Director, Malts.

Game of Thrones Six Kingdoms Mortlach Aged 15 Years will be available in extremely limited quantities nationwide this December with suggested retail price of $150 for 750ml. Check online at ReserveBar.com or through your local retailer!