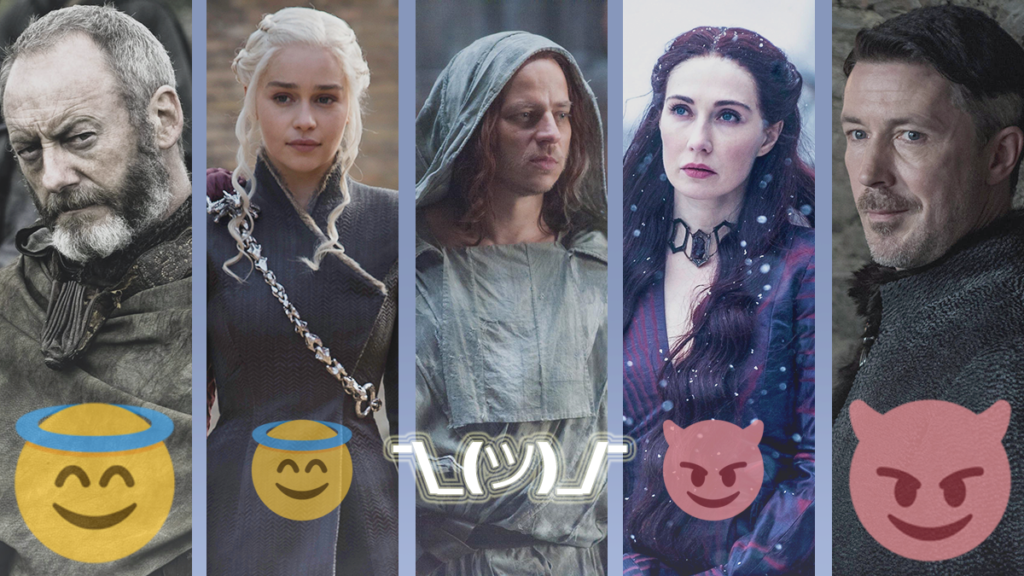 Part 2 of our Game of Thrones fandom survey results finds three strong women — Daenerys, Cersei and Sansa — among respondents’ favorite AND least favorite characters. And a question gauging the morality of 40 characters reveals that a man normally associated with “black and white” comes closest to purely gray.

Yes, Part 2 (of 4) focuses on characters – heroes, villains and more – and their sometimes differing book/show iterations. We’ll also look at how various subgroups of respondents – based on age, gender identity and other factors – see specific characters.

Check out Part 1 for basics on the survey, as well as results regarding plotlines, season rankings and missing characters!

The survey’s very first exercise was this:

“Please rate each character below as to how “good” or “evil” you consider them, using the scale provided. Please consider ONLY their overall show portrayal. Ignore the books if you have read them.”

The Top 20 characters were as follows: 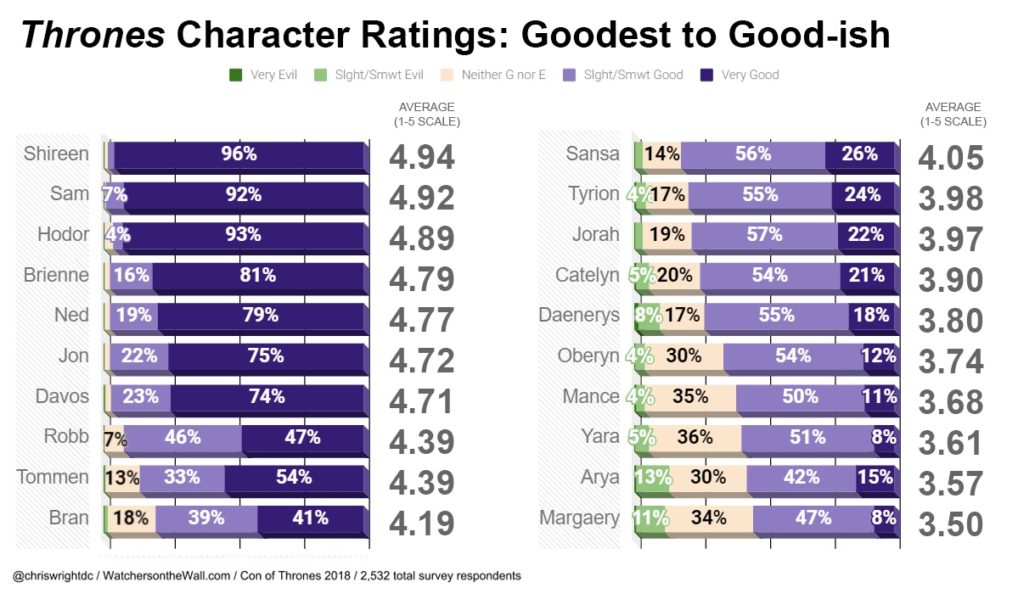 While at Con of Thrones I found myself at a table with Kerry Ingram and Sam Coleman, and got to tell them their characters were seen as very, very good. Although real-life Sam may have been slightly jealous of on-screen Sam edging out Hodor for number two.

Petra: It catches my attention that three of the top five “goodest” characters (Shireen, Hodor and Ned) suffered unjust deaths, though I don’t think this necessarily influenced the vote. Brienne and Sam are going strong, after all, but it does say a lot about Game of Thrones itself.

And here are the “bottom 20” characters, though the first handful are still in marginal “good” territory: 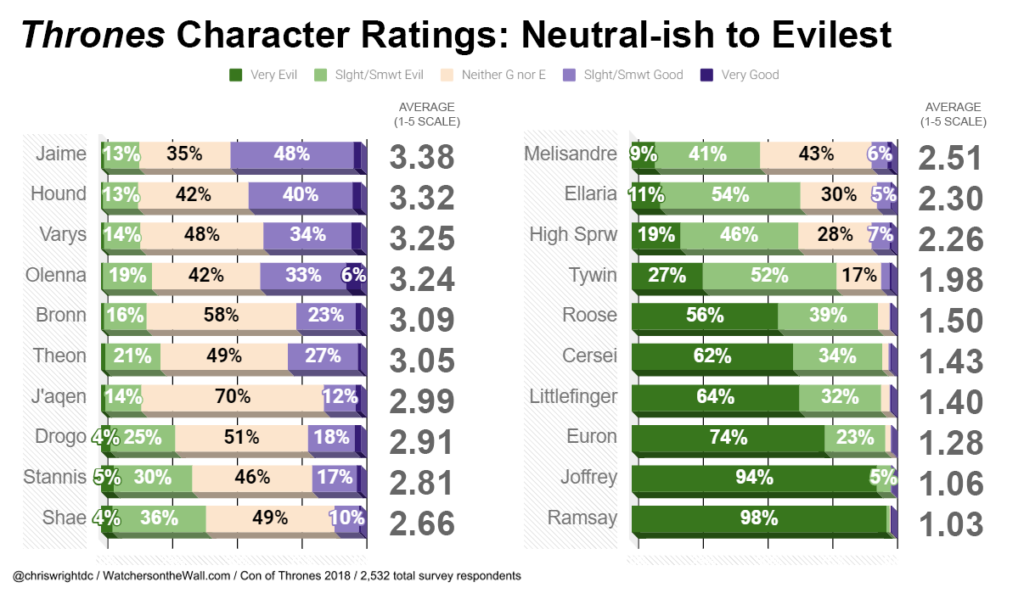 The mean score for the 40 characters was 3.30 – slightly good. Twenty-one characters (Shireen through Jaime) were labeled “good” by a majority of respondents; nine were dubbed “evil” by most. The remaining 10 found middle ground, and the fact a certain Faceless Man wound up a smidge from a perfect 3.0 delights my inner data geek.

Petra: It’s fitting that Jaqen is placed almost perfectly in the middle of the 1 to 5 scale, since he’s the epitome of moral neutrality. It also tickles me that Yara is considered significantly “good-er” than Theon despite her adherence to the Ironborn lifestyle prior to her pact with Daenerys.

With the final season of the show coming soon, the remaining characters will meet their fates. We wanted to see who viewers are rooting for among those who remain. This included some of the 40 characters listed above, as well as other more minor ones. Here’s what we asked:

“Here’s a list of characters still on the show. Which do you WANT to have a happy ending, regardless of whether you think they will? Check any that apply.”

Below is the percent of overall respondents who checked “yes” to a given character, ranked from most to least. 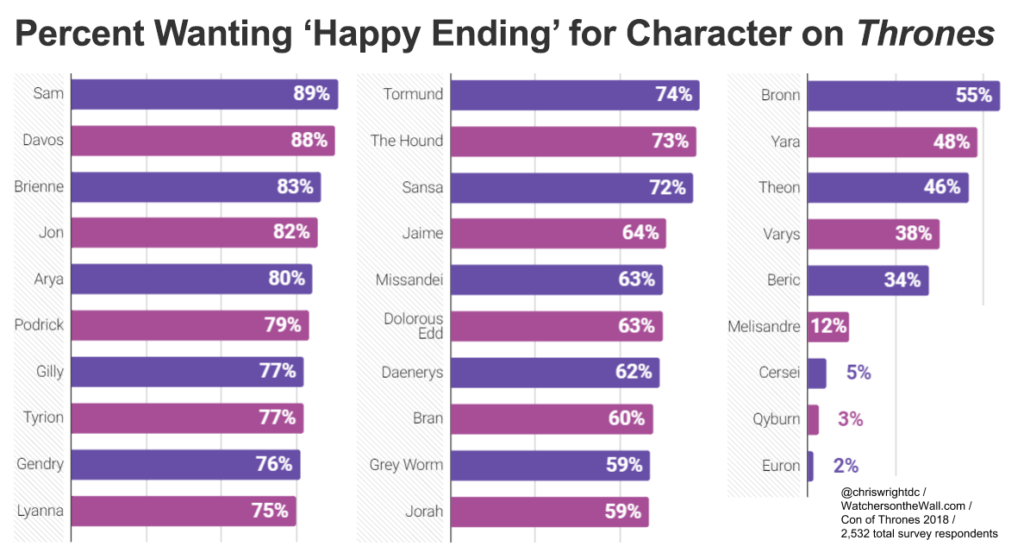 While the “goodest” characters from the earlier charts tended to do best here, there are exceptions: Arya, for one, placed 19th of 40 characters on good/evil, but rates fifth here.

Petra: I’m interested to know why romantic couples didn’t rank closer together. Why do more people want Sam and Missandei to have a happy ending than Gilly and Grey Worm, respectively?

Six of these characters had quite different “happy ending” ratings among our three viewer groups from Part 1 (book first, show then book, show only), including arguably the show’s three leads. These percentages are approximate, not exact, due to an issue within PollDaddy.

Edd is the only one here with a lower rating from show-onlys. I tend to think this may be because many of them didn’t recognize his name; he’s one of the less-seen on this list.

Fan Favorites, and Not So Much

Fan favorites are an eternal question for this and just about any other fan base. For our throng of 2,500-plus viewers, we have a clear answer to both questions. And they both happen to be northern bastards: 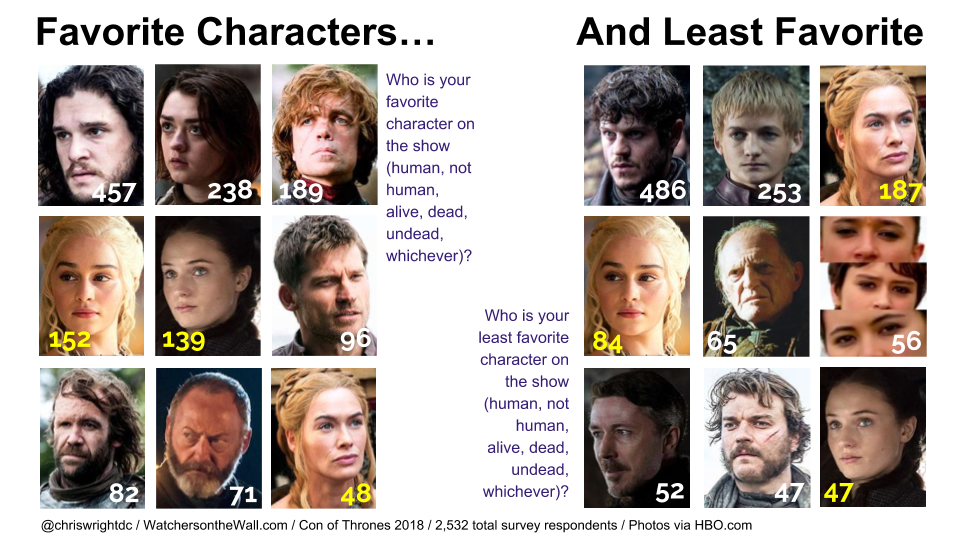 Petra: I’m intrigued that the only “favorite” characters who also ranked as “goodest” are Jon and Davos. The others rank somewhere grayer. Cersei is even among the “evilest of the evilest.” Fans of Game of Thrones are willing to acknowledge the darkness in the characters they love.

There’s also a lot to unpack about the fact that Sansa, Cersei and Daenerys – three women with power – are the only characters among the top favorite and least favorite characters. We’ve highlighted them in yellow.

See the comments section (maybe not when you read this, but soon) for a longer list of favorite and least favorite characters.

It has been said that certain characters have very different depictions on the show vs. in the books, with morality being a key component. We attempted to measure this idea with the following question, shown only to book readers.

Here are certain characters from the previous exercise. For each, indicate how you’d fill in the following sentence regarding their show vs. book depiction. Leave blank if you aren’t sure. “_____ was depicted as ____ on the show, compared with in the books.

Again, there was a five point scale, ranging from “much more evil” to “much more good. Only a handful of characters had noteworthy results, with most falling into the “neutral” area overall. 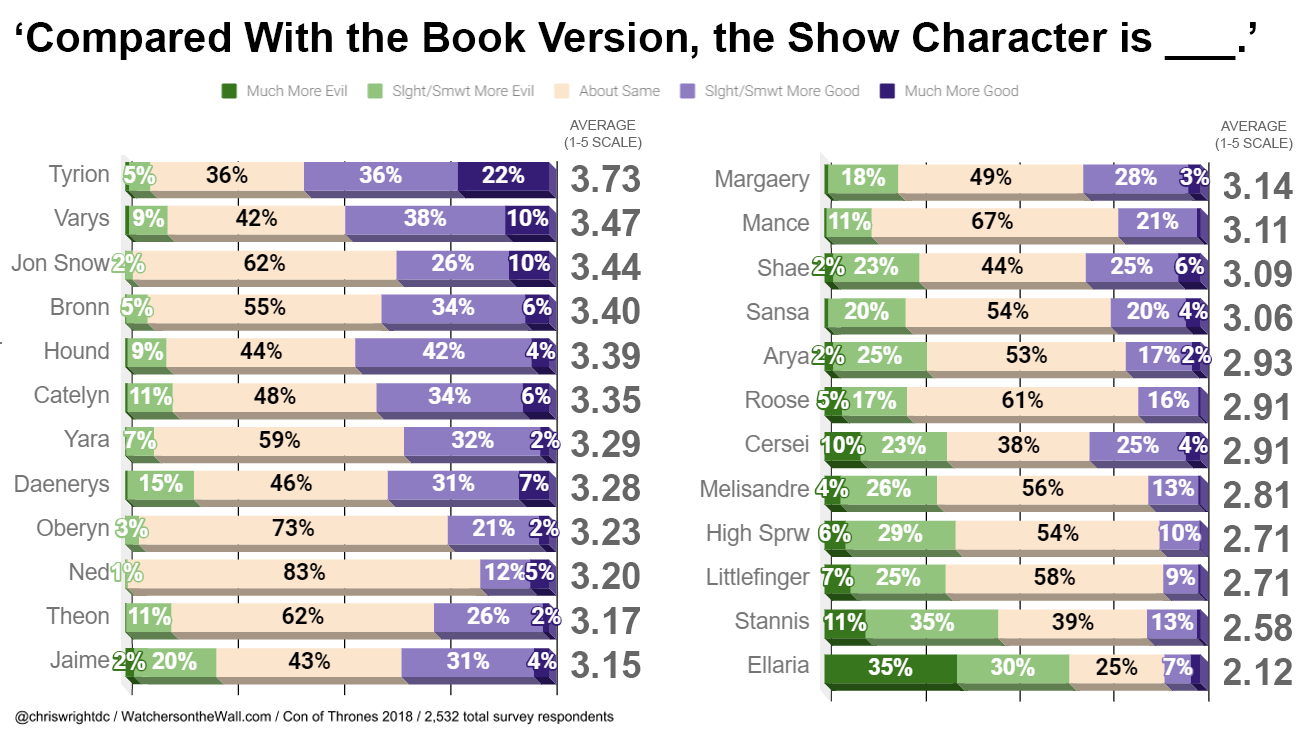 Petra: It sounds obvious but committing violence against children is a pretty clear metric for how the audience perceives a characters. Stannis and Ellaria are considered much more evil in the show in which they both murdered teenage girls. Conversely, Tyrion and Varys are considered much more good in the show, which omitted Tyrion’s threat to rape Tommen and the implication that Varys cuts out children’s tongues.

A related question that came later in the survey also applied only to book readers and addressed book/show character differences in general:

“Below are characters whose depictions/characterizations on the show have been pointed to as different than in the books. Which version do you prefer?” 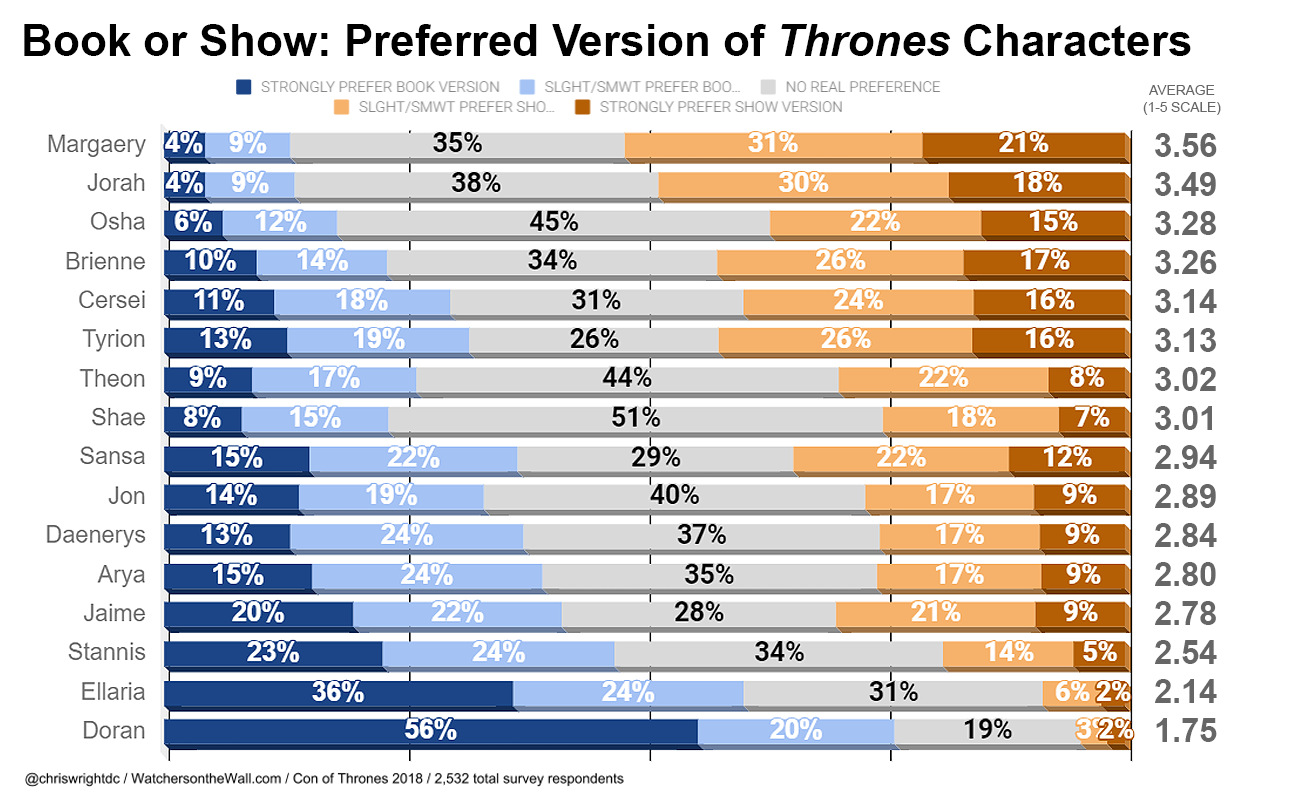 The overall average score was 2.91, very close to a 3.0 score of “no real preference,” which may be a surprise given these were book readers who, based on results from Part 1, generally have a lower opinion of Thrones than show-only respondents.

‘Isolated’ Viewers and Other Observations

We asked several demographic questions to look for differences among varied population groups (The book/show question was one of these). Respondent answers resulted in a lot of variation.

A comprehensive look would be extremely time consuming, so below are the most stark results when looking at the “Is this show character good or evil” question. (For the stats geeks among us, these all had p values of .000 in a Chi Square test, Likelihood Ratio and Linear by Linear Association at 95% confidence.)

The first chart will require some explanation. At left is the familiar book/show question. At top-right are results for Jaime divided by whether the respondent nearly always watched the show as it aired; watched it at their own pace (whether binge-watching or not), or watched in a mix of the two.

As for the “isolation group” at bottom right, imagine a group of people being sequestered to watch the show, each on his or her own. This is as close to that as we’ll come. It is made up of the 175 or so respondents who are book only AND spend less than an hour a week discussing or reading about the show online or in “real life,” whether or not it is airing at the time.

Petra: It’s interesting that viewers who are familiar with the book versions of these characters have darker impressions of the show versions, as if the characters on screen remain tainted by their (much harder to like) book counterparts.

Next, here are the most stark differences among those calling a character “good” by age, political orientation and status as LGBTQA+. For some reason, there were more differences by age than by any other grouping. And a word of caution: It’s easy to overinterpret demographic results such as these. Most will fall into one of three categories:

Not sure any of the below will fit under that final category for most people, but here we go. 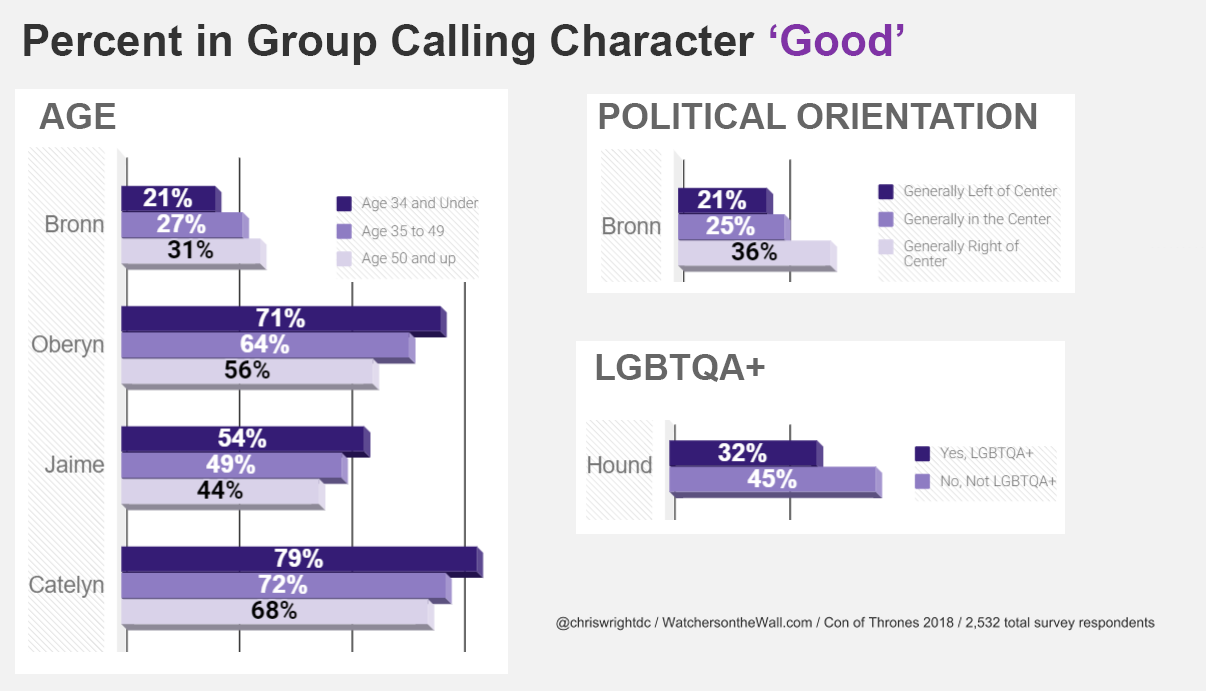 Petra: It’s always risky to weigh in on why people of certain demographics do (or don’t) gravitate to certain characters. Stereotyping feels inevitable. However, I wonder what it is about Bronn, of all characters, that appeals more to older, conservative audiences. It also surprises me that younger audiences find Catelyn more “good” than older audiences, as I would have assumed viewers closer to Catelyn’s age (and therefore life experience) would be the ones to empathize with her.

Lastly, let’s look at characters where the biggest difference was among using the “evil” label instead of good. Note, the gender identity results show only male and female because there were too few answers of nonbinary or other to use them for crosstabulation. 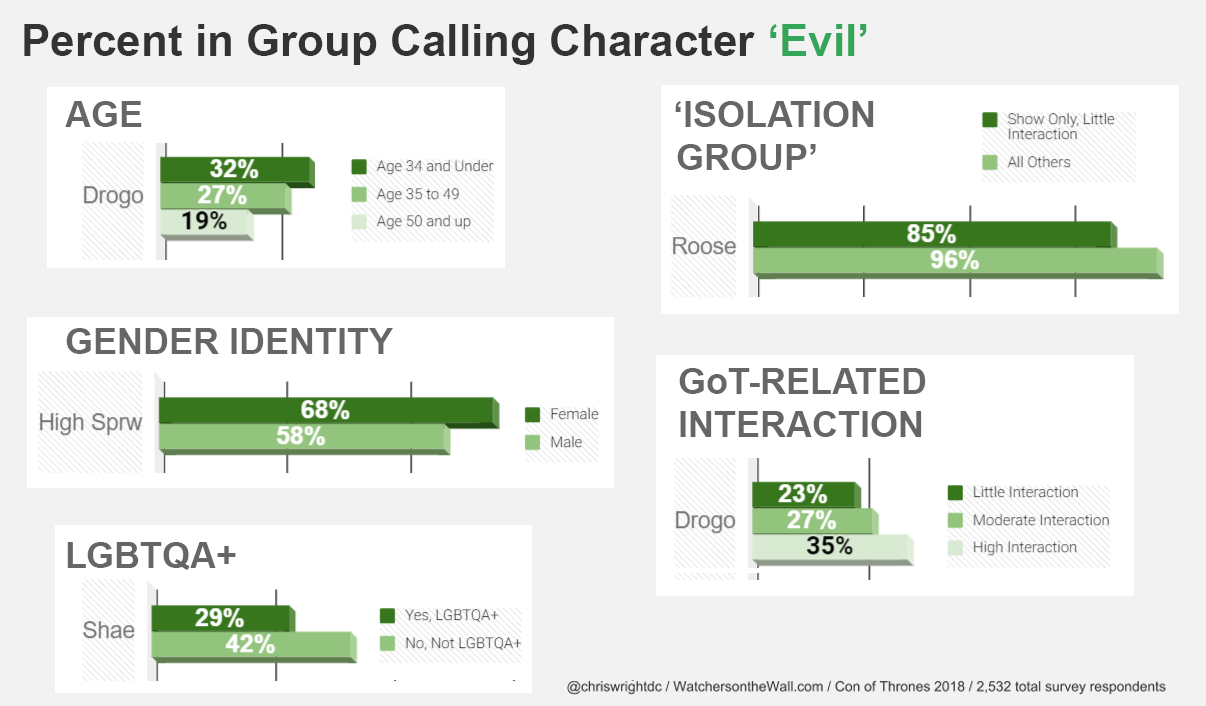 “Isolated” viewers being less likely to find Roose Bolton evil may be the closest we come here to a “WTF” statistic (though 85% still did, so don’t get too excited). Given these folks are basically uninvolved in the series’ culture, is the last thing they remember about him — stabbed by his jealous son — blocking memories of his earlier deeds.

That’s all for now. We’ll have Parts 3 and 4 of the results for you soon!