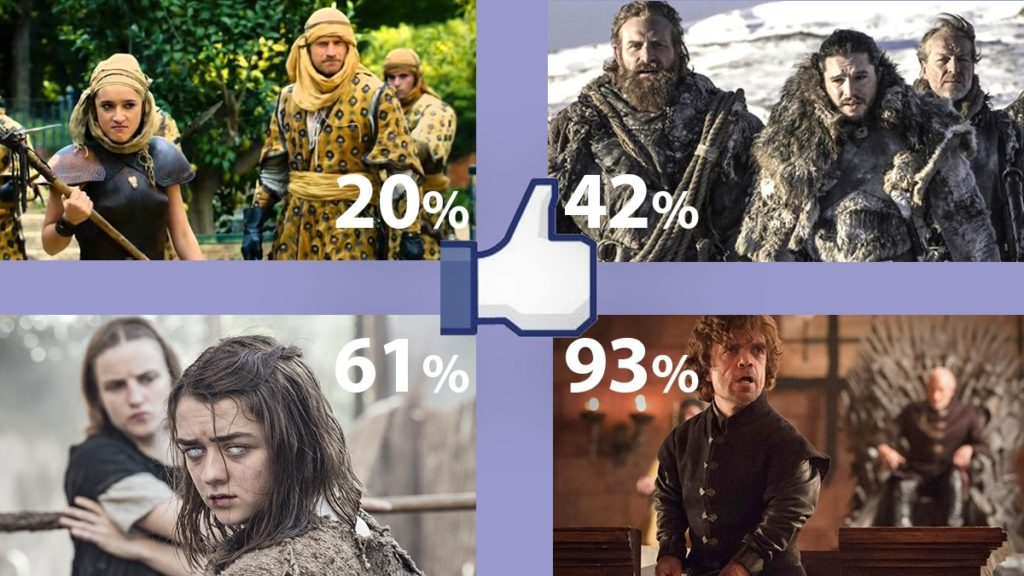 However, respondents overall found book-based storylines more effective than those largely created for the show.

With help from Petra, I’ll look below at opinions on how the show handled 10 plotlines, including Jaime’s trip to Dorne and Sansa’s return to Winterfell. Viewers’ emotional reaction to certain events will be revealed, as well as the show’s most-missed book characters. We also reveal how respondents ranked the seven seasons. Do book readers rank them in the same order as show-only folks? Let’s find out!

The survey was open April 16 to 29 and was mainly promoted via Watchers on the Wall; it was also linked to at Winter is Coming, r/gameofthrones, r/asoiaf and elsewhere. In all, 2,532 people completed at least the minimum required portion of the survey, which was structured so respondents could vary the time they spent on it. The results reflect their opinions alone, as this was not a random sampling (hence the vaguer “support the idea that” above, and not “show that”).

Among other demographic-style questions, respondents were asked which of these statements best described their experience with Game of Thrones:

For the record, Petra and I both fall into the middle category. And so did most others, since this is how things ended up:

Petra: Considering that  fantasy and science fiction are generally thought of as male-dominated genres, it’s fascinating that most respondents were women.

The differences among the three viewer groups were stark, as it were, when asked what they thought about 10 specific storylines. Here is the question, as written, from the survey, along with the 10 plots, which were randomly ordered.

“Below are 10 storylines from the show; for each, indicate how effective (i.e. entertaining, compelling, logical, well-executed, etc.) you think they were.” 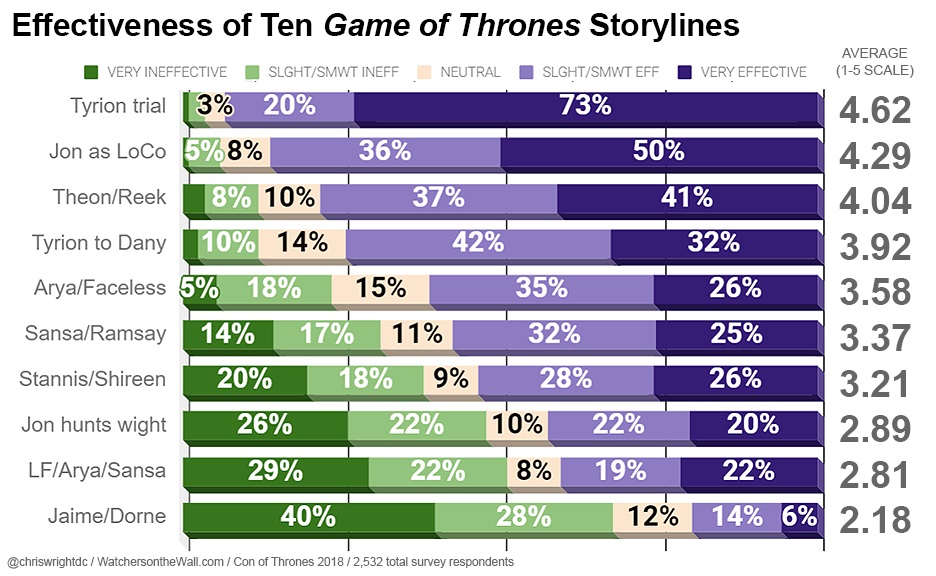 The chart probably speaks for itself, but two quick notes:

Petra: It’s interesting that Jon’s mission to capture a Wight and Littlefinger’s manipulation of Sansa and Arya were considered so disappointing when the payoffs to those plots were met with raucous cheering, in my experience. Similarly, I remember the listed Arya and Theon plots not being well-received, when they aired, but perhaps time has improved viewers’ feelings.

Things get more interesting looking at these results broken out by viewer group. Half had statistically significant differences according to what’s called a Chi Square test. Here are the three plots with the biggest changes from group to group. Note this chart shows INeffectiveness: 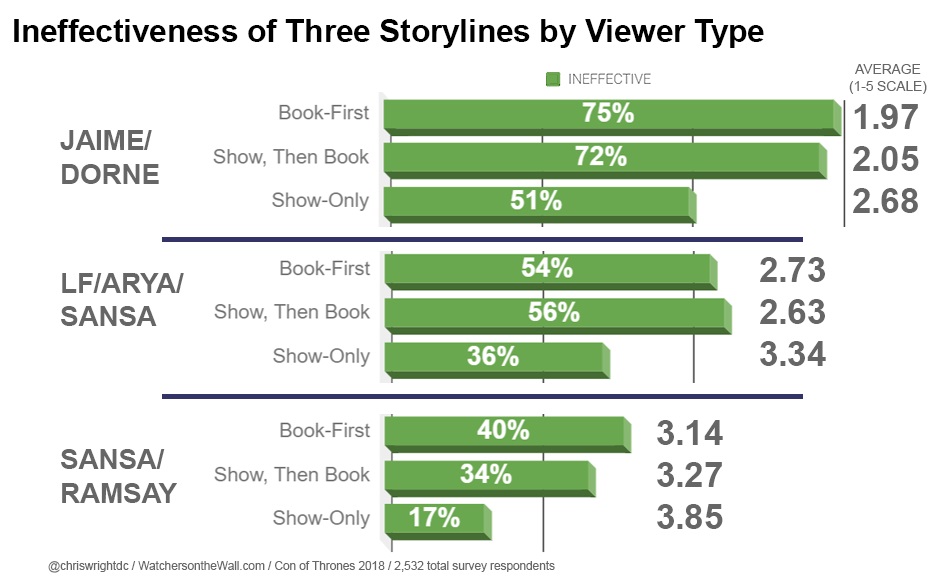 It’s apparent book readers found these often-maligned plots much less effective than show-only respondents. But the picture isn’t quite that simple. A scatterplot gives a more all-encompassing look at this plot-by-plot data.

This chart shows, left to right, how each of the 10 plots was rated by our three groups of respondents. Remember, the scale used was 1 to 5, with 5 being “Very Effective.” Check out how the plots near the top — the more effective ones — show small changes from book-firsts over to show-onlys, while those nearer the bottom swing upward. 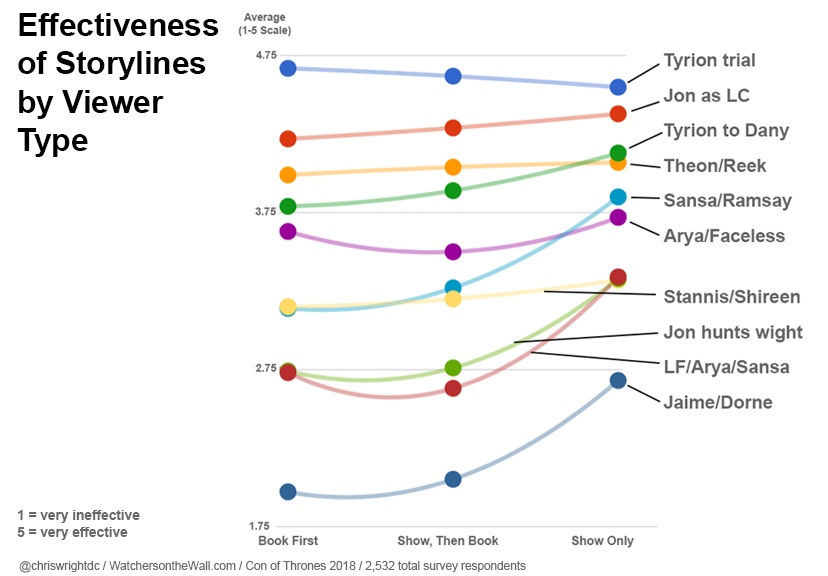 Note that the views of the middle group, Show-then-Book, tend to stick more closely to Book-Firsts than to Show-Onlys, and that for all three groups, the plots fell into a similar order, with near-direct adaptations up top and show creations at the bottom.

Emotional Impact of Plots and Events

“Below is a list of major plot developments. For each, think back to when you *first* saw the event (or first read about it, if that occurred first for you). What was your initial *emotional* reaction to each outcome?”

The event were listed in a random order. There was again a five-point scale, ranging from “Very pleased” (5) to “Very displeased (1). Here were the overall results. 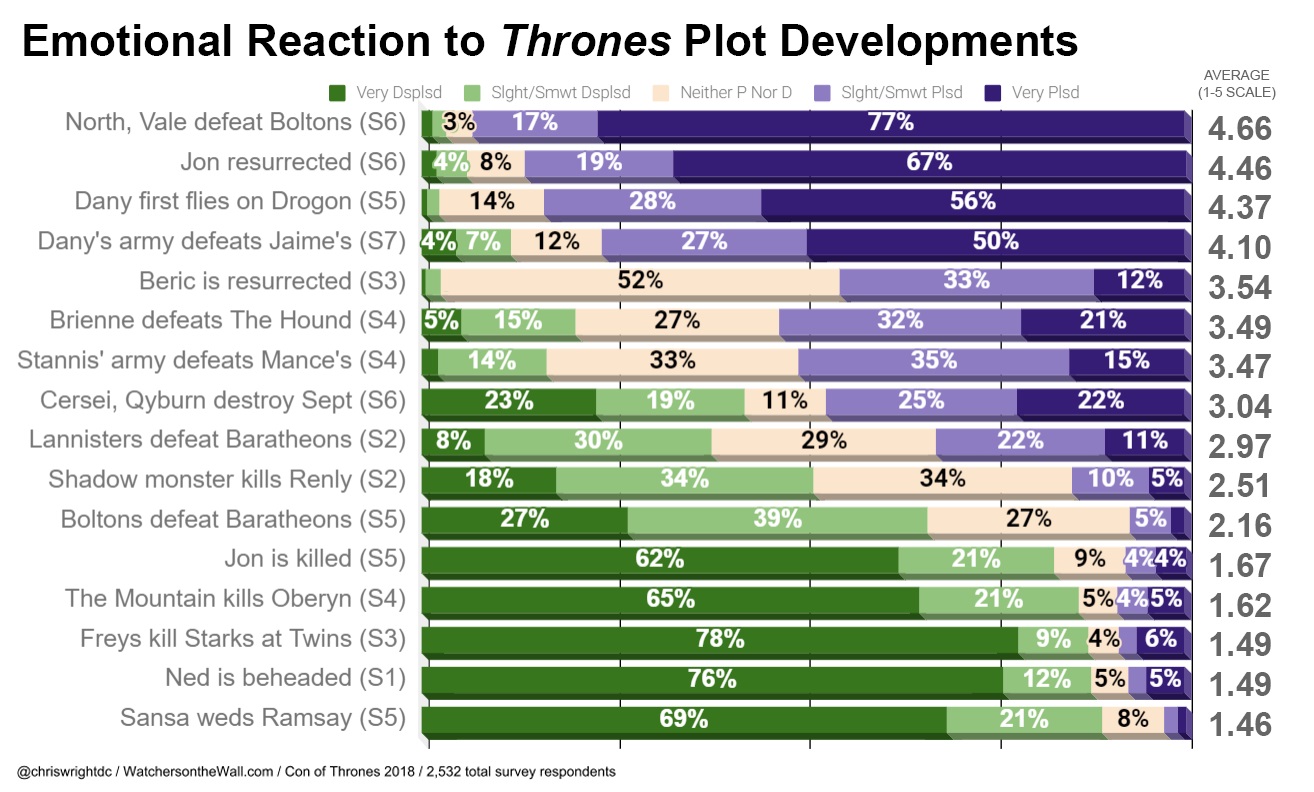 Again, kind of speaks for itself. I’m most fascinated by the sept explosion and Blackwater results being smack in the middle with essentially neutral scores.

The two most-pleasing events listed were also the two with the biggest difference among our three viewer types. 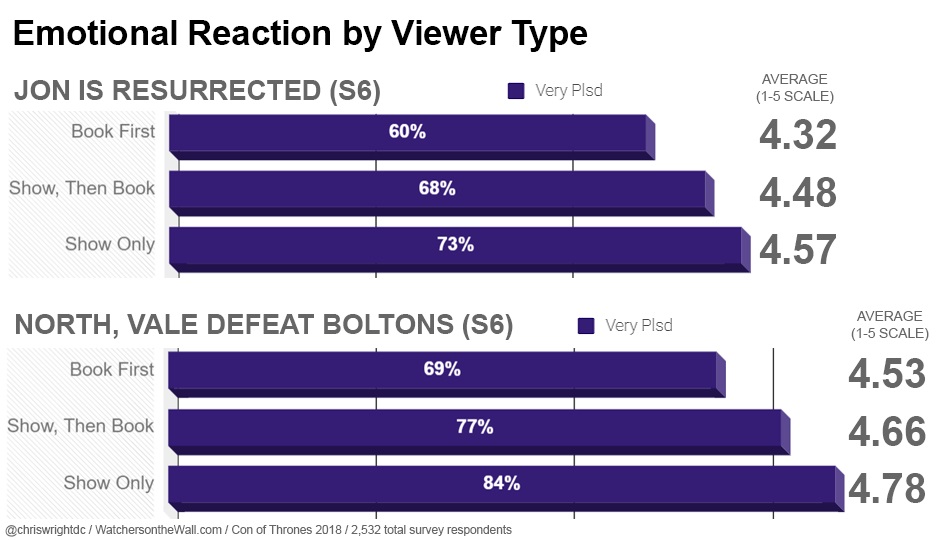 Folks were pleased by these results, but show-onlys significantly more so. Interesting that both are from Season 6 — more below on that — and involve Jon.

These ratings and those above, while interesting, are still narrowly focused on the plots Petra and I selected. Looking at how our three viewer groups ranked seasons gives us a broader view.

Here’s how respondents ranked the seasons from “best to worst” (they could access a brief summary of each season). At left is how everyone did it. At right are the ranks split into our three viewer groups. 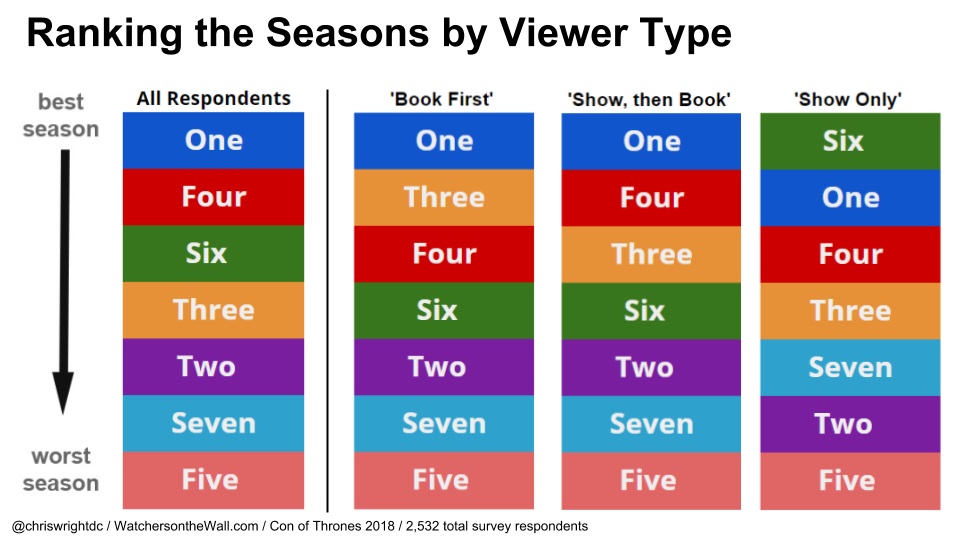 So yes, the first was the best, respondents said overall — although interestingly, show-onlys ranked Season 6 in the top spot. Season 5 was in the basement, as may have been expected.

Here’s a scatterplot that reveals added detail, including a photo finish/eclipse for third place. 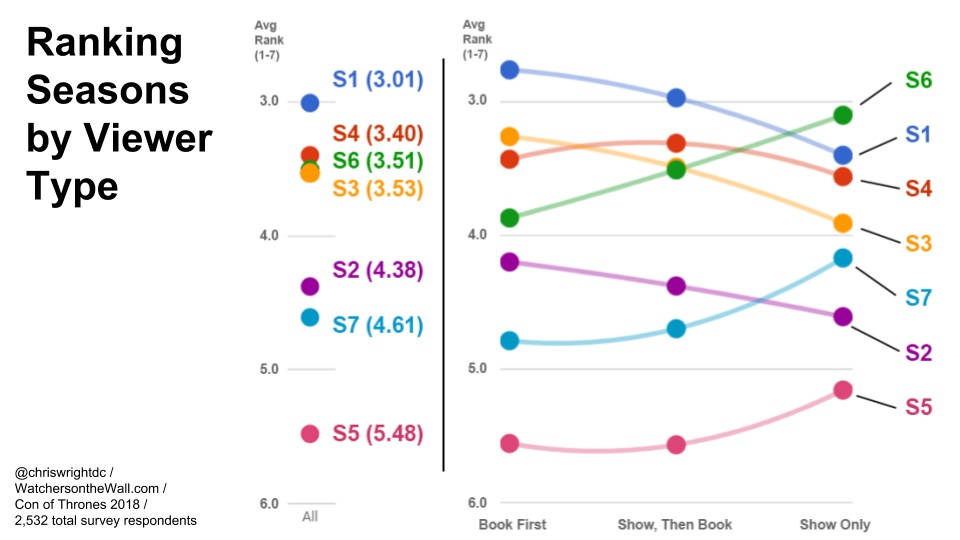 This exercise again reinforces the idea of Show-Onlys having less of a problem with the most recent three seasons (check out the arcs of Seasons 1-3 vs. Seasons 5-7).

Petra: I’ve gotten the impression anecdotally that book readers prefer Game of Thrones when it focuses on characters and politics and don’t mind slower pacing, while non-readers are willing to forgive inconsistencies for plot advancements and character interactions. The show has gradually shifted its emphasis from the former to the latter. Season 6 in particular is when years of buildup start to pay off, pleasing show-onlys, but with that comes plot holes and a loss of nuance, irking book readers.

The Things We Left Behind

Speaking of later seasons, that’s when it became apparent that certain book elements were definitely left out. Here’s the changes that most made book readers feel like they had hearts of…well, you know.

“Some book-to-show changes have generated criticism. What major changes, if any, most displeased you? Choose up to three below (you may also add your own)”

In addition, 211 respondents added their own omission. Here are the top write-ins (similar ones, for obvious reasons, have been lumped together):

It’s fair to think any of these would have gotten more votes had I thought to include them in the initial list of nine changes. But not everyone thought this was a worthwhile query, with one person writing, “These are the changes you have to make with a tv show. Get over it. Dumb question.”

That one-two punch of Stoneheart and Arianne repeated when we asked book readers to write in their favorite character who hasn’t been on the show. These characters got at least 10 votes:

An oddity: Wyman Manderly, who HAS been on the show, got 10 votes. Perhaps people used his character as a proxy for his well-known book speech? Yet Septon Meribald, who as a named character has NOT been on the show but also has a famed speech, only got one vote.

Petra: It’s noteworthy that the two characters people are most unhappy about being omitted from the show are two proactive female characters. As big of an impact as their absence has on the plot, I suspect a lot of the outrage stems from the fact that many have come to view LSH and Arianne as symbols of female agency (particularly as a point of comparison when criticizing the show).

That’s all for this installment. Stay tuned, as we’ll release results of other questions in three more parts, in the days ahead!