Enter to Win "100 Things Game of Thrones Fans Should Know & Do Before They Die"! | Watchers on the Wall | A Game of Thrones Community for Breaking News, Casting, and Commentary 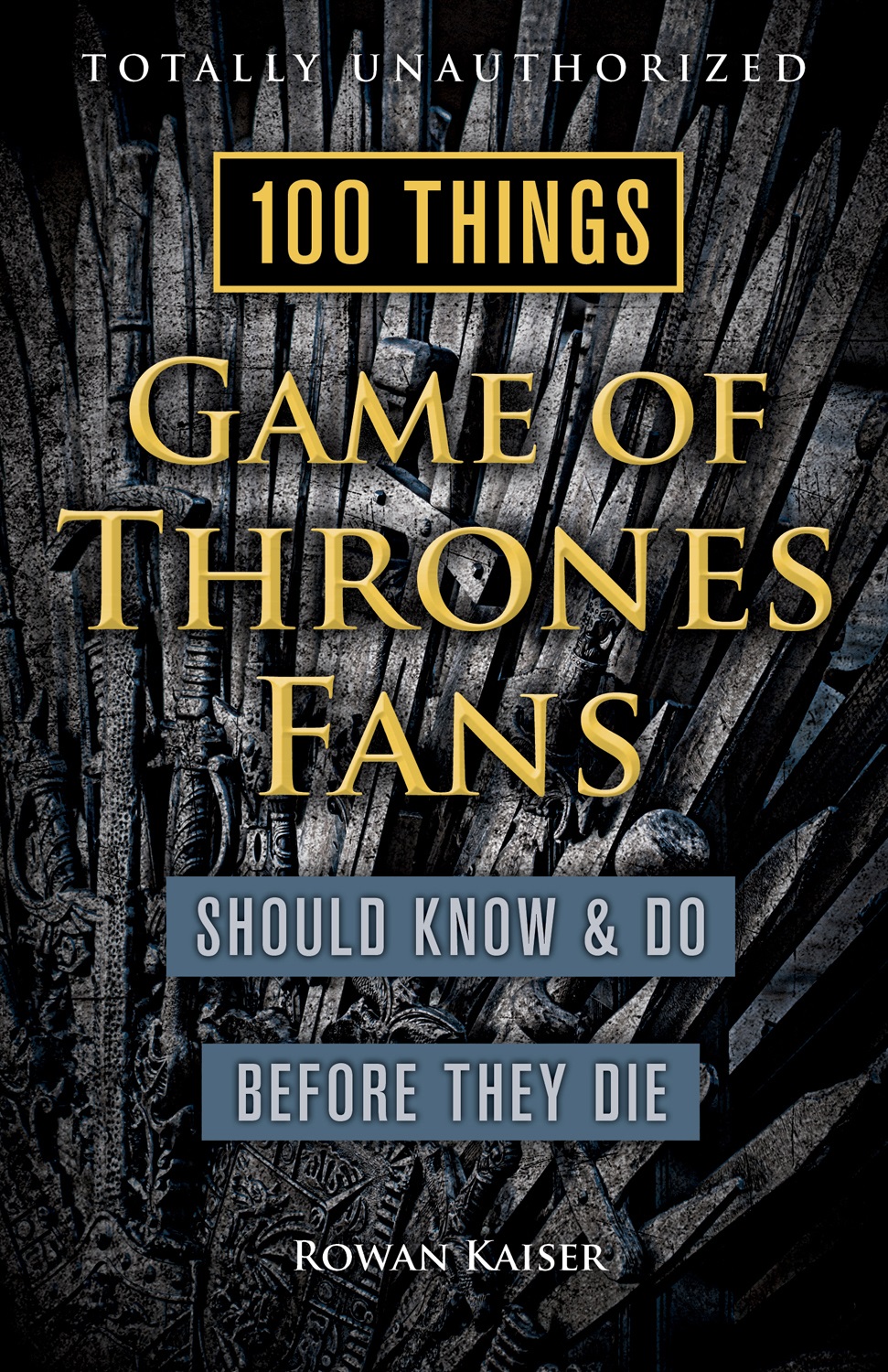 The premiere of Game of Thrones season 7 is so close, we can taste it…but it’s not actually here, is it? Leaving us with a torturous week and a half to kill before we have new episodes in our grasp! Wouldn’t it be nice to have something to do? Well, there’s a new book coming out (available August 1st) that has a few answers, and we’re giving away three copies here at Watchers on the Wall!

We’re kicking off another big worldwide giveaway today with 100 Things Game of Thrones Fans Should Know & Do Before They Die, by Rowan Kaiser. This new book is packed with trivia, accessible for all levels of fans, and features behind-the-scenes tales from the series. Readers will find the book’s key character profiles, geography and history sections handy, and who doesn’t want to know how to track down an actual Iron Throne? The book contains a number of pieces exploring the roots of the show, and how Game of Thrones fits in the larger scheme of television and fantasy.

But don’t take our word for it- enjoy an excerpt from 100 Things Game of Thrones Fans Should Know & Do Before They Die discussing the notorious Red Wedding, presented below, and then enter to win!

“The Lannisters send their regards.”—Roose Bolton

June 2, 2013, may have been the greatest day in social media history. This was the date that Game of Thrones aired “The Rains of Castamere,” the ninth episode of the show’s third season—aka the “Red Wedding.” This was arguably the peak of Game of Thrones as a cultural phenomenon. The ratings had continued to grow, the third season was the most critically acclaimed yet, and there really wasn’t any kind of backlash of the sort that started to show up in Season 4.

The Red Wedding itself is arguably the most important moment in all of Game of Thrones as well. Three major characters are killed all at once, but, more importantly, so is the idea of hope for a legitimate resolution to the civil war in Westeros. To have that all happen at once turned the Game of Thrones fans who didn’t know what was coming into shrieking messes—and those who did know what was coming ready to watch the spectacle. (As a fascinating historical document, the Twitter account @redweddingtears still has several of the best reactions easily accessible.)

To quickly summarize: Robb Stark made a marriage alliance with House Frey in Season 1, but broke it to marry Talisa Maegyr in Season 2. When his armies started falling apart in Season 3, he recruited his uncle, Edmure Tully, Lord Paramount of the Riverlands, to marry into their upstart rivals, House Frey. But the Freys join with the Lannisters and Roose Bolton, Robb’s chief henchman, to betray the King in the North. At the feast at the end of the wedding, the Freys attack, slaughtering most of Robb’s armies and his lords in the castle hall. Talisa is killed first, then Catelyn Stark attempts to allow her son to flee by taking Lord Frey’s newest wife hostage. He rejects her demand, Roose Bolton stabs Robb, and Cat gets her throat cut. Even Robb’s direwolf is killed!

It was also, for those watching, the single biggest spoiler in all of A Song of Ice and Fire. Once the episode’s title was revealed, readers knew that “The Rains of Castamere” was going to be the episode that broke viewers’ hearts. We watched with glee as Twitter and Facebook exploded with pain—partially because it was funny, but also because we were welcoming people into the club of knowing that, yes, George R.R. Martin was going to tear out your heart in this particular way. And even those of us who thought we knew what would happen had a few surprises: Robb’s wife in the novels doesn’t go to the Red Wedding and survives for several books. Talisa Maegyr is not so lucky.

Much like Ned Stark’s death in Season 1, the key to the Red Wedding’s importance is how many rules it breaks. Certainly it’s possible for heroes to die, and only the most devoted Robb Stark fans might say that he’s more important than Jon and Dany, let alone Arya or Sansa. But Robb represents the hope for a conventional victory. If Robb can survive and thrive, then maybe there’s a way for the good guys to win through straightforward war and diplomacy.

But Robb can’t. The political structures of Westeros have been so thoroughly broken that they cannot grant our heroes victory. Bran Stark has to go learn magic. Arya Stark learns to become a warrior and assassin. Sansa Stark, the political football for so long, learns subtle diplomacy and negotiating the halls of her enemies’ power. And Jon Snow has to prepare to lead against the true threat, the White Walkers, instead of fighting a petty civil war.

The key crime of the Freys and Boltons who commit the Red Wedding isn’t murder but, instead, the denial of guest right. Westerosi culture is built around the idea that once a guest has been offered bread and salt, they will be protected. The Freys go out of their way to do this and, as Bran explains, for this they will be damned. For Roose Bolton and Walder Frey, who take over the North and the Riverlands respectively, this seems a small price to pay—but both are dead by the sixth season’s end, as is Tywin Lannister, who allied with them and helped create the plot.

So the net result isn’t merely a political loss for the Starks and victory for their enemies, but an absolute disaster for nearly all of Westeros. The bad guys, so desperate to defeat the Young Wolf, destroy all norms of aristocratic interaction and, in so doing, damn themselves as much as the people they’ve murdered. The Red Wedding is an apocalypse, both for the Stark armies and for the hope that the civil war isn’t the end of everything good in the Seven Kingdoms.

After the Red Wedding it becomes clear: Westeros can only be saved by a massive change in how it works, so that nothing like the Red Wedding can ever occur again. And for fans? It’s proof that there’s nothing else like Game of Thrones on television.

This excerpt from 100 Things Game of Thrones Fans Should Know & Do Before They Die, by Rowan Kaiser, is presented with permission from Triumph Books. For more information and to order a copy please visit www.triumphbooks.com/100gameofthrones.

How do you enter? Choose one of these methods, or all three to earn up to 3 total entries.

Entries are accepted until 2PM EDT, Wednesday, July 19th. The three (3) winners will be randomly selected and announced soon after the deadline on July 19th.