Check out the 10 Game of Thrones-themed doors and The Extras Dept discusses GoT extras casting | Watchers on the Wall | A Game of Thrones Community for Breaking News, Casting, and Commentary 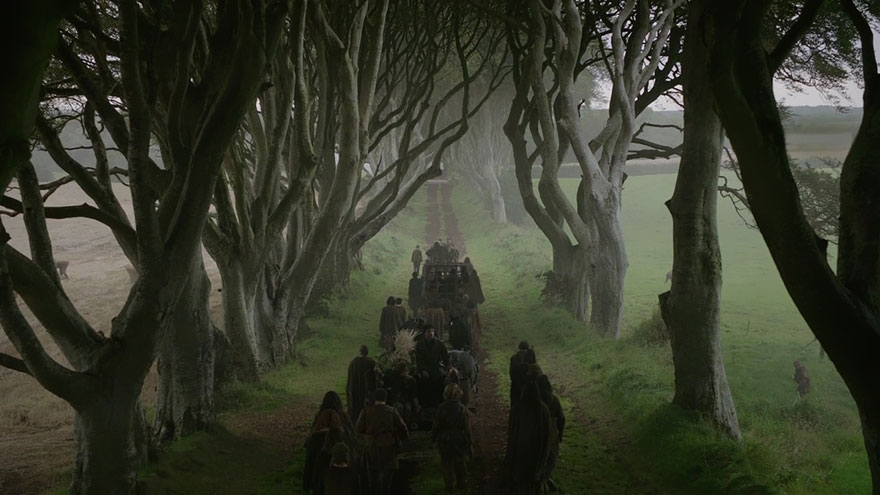 If you’re heading off to Northern Ireland any time soon, be sure to drop by any one of the 10 businesses currently decorated with a intricately carved Game of Thrones-themed door. They’re gorgeous, creative and add a bit of Westerosi glam to wherever they are.

In 2016, a few trees from the Dark Hedges (which served as the King’s Road in season 2) blew down during Storm Gertrude. The felled 200-year old beech trees were fashioned into 10 doors engraved with Game of Thrones-themed designs. Now, each hang in local pubs, restaurants and inns located near Game of Thrones filming sites. 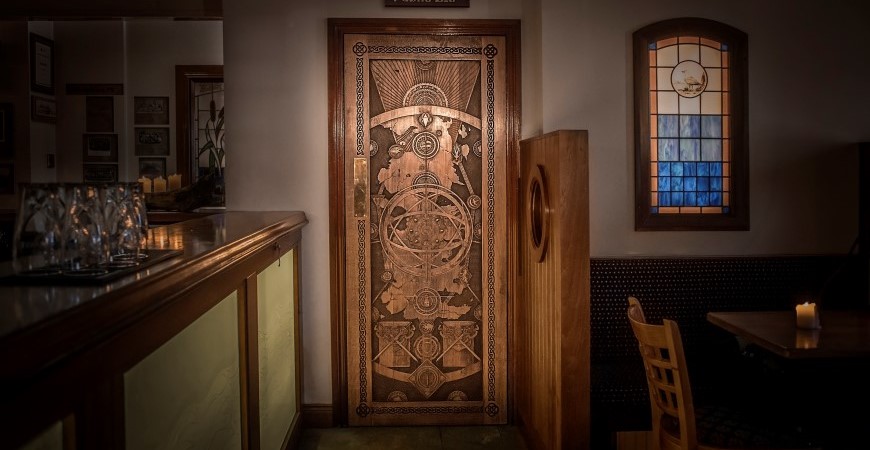 The Cuan is a family-run restaurant in Strangford, a seaside village in County Down. It’s near Castle Ward aka Winterfell, Audley’s Field, Quoile River and Inch Abbey. 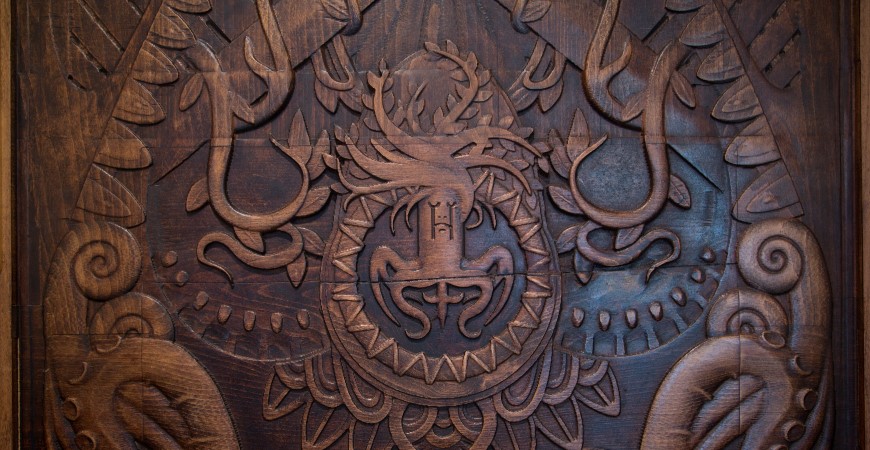 This pub and B&B is located in the central square of Portaferry around 2 miles from Quintin Castle where Bronn and Lollys Stokeworth’s scene in season 5 was filmed. 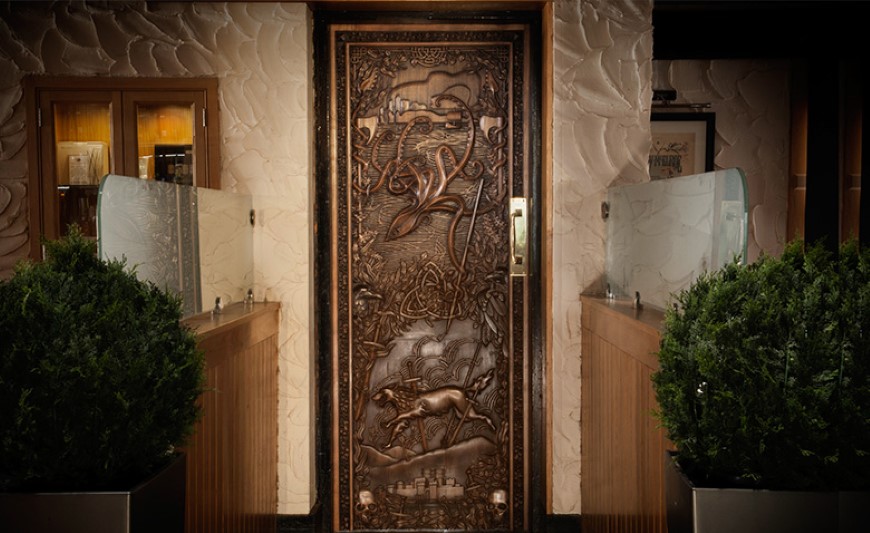 Percy French is a scenic restaurant in Newcastle at the foot of the Mourne Mountains near Tollymore Forest Park (where the direwolf pups were discovered in the pilot) and Leitrim Lodge.

4 Blakes of the Hollow 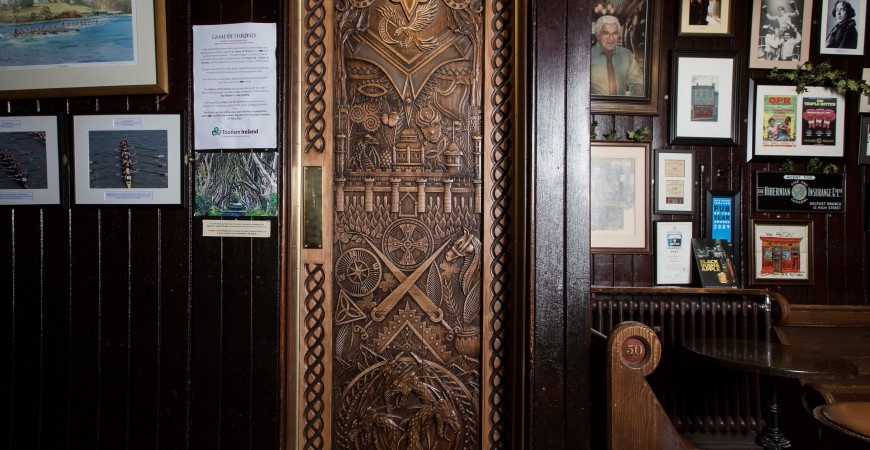 This Victorian pub is over 125 years old and located near Pollnagollum Cave which served as Hollow Hill, a hideout for the Brothers Without Banners, in season 3. 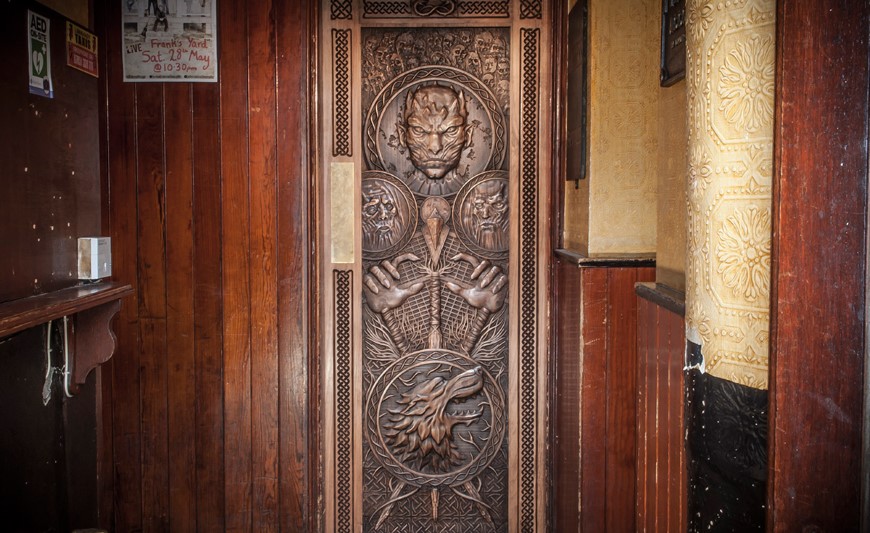 This White Walker themed door hangs in the traditional pub of Owens (I suspect there’s a jar for every “Hold the Door” pose that’s struck there) in Limavady, which is near Downhill Beach (aka Dragonstone) and Binevenagh (the Dothraki sea in season 5). 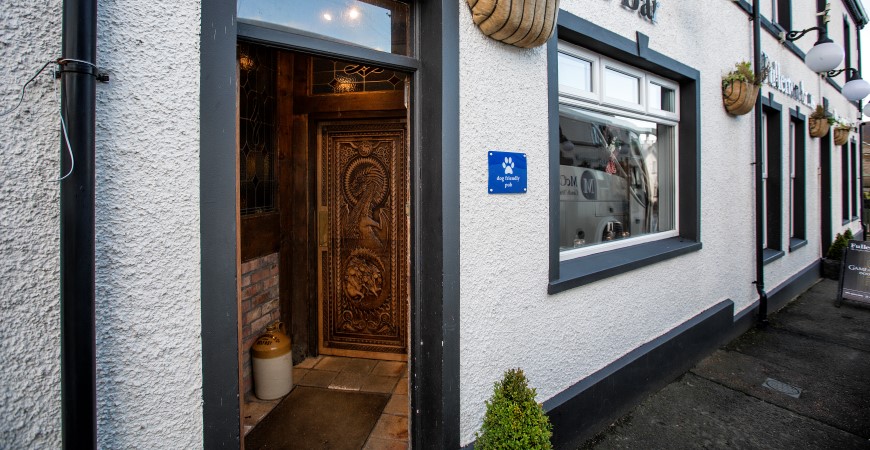 This guest house is within walking distance of Ballintoy Harbor, the filming location for most of the Iron Islands’ scenes. 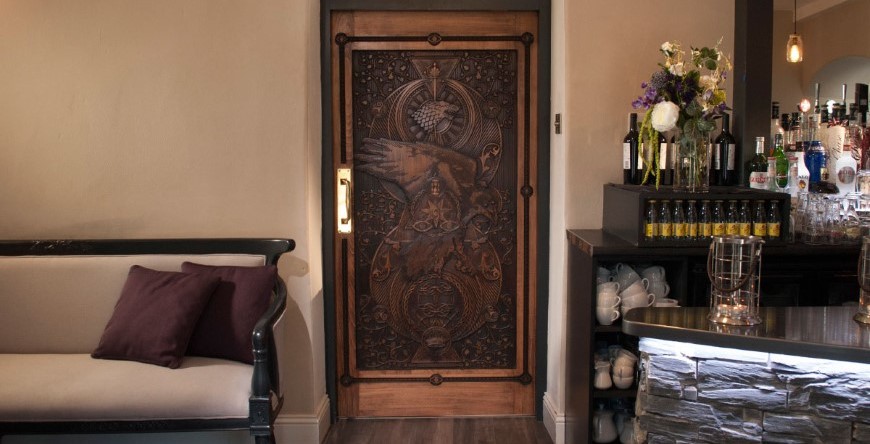 Of all the local businesses graced with these Game of Thrones doors, Gracehill House is the one that’s located closest to the Dark Hedges from which these doors was made in the first place. 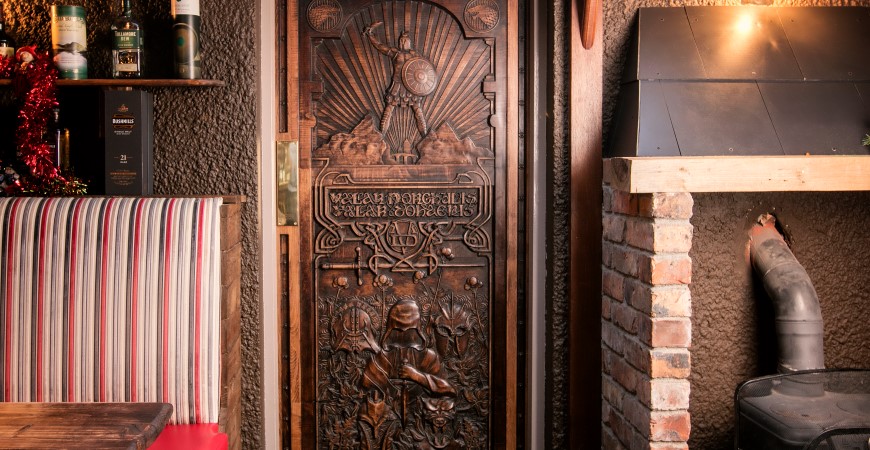 This tiny bar (one of the smallest in Northern Ireland) in Cushendun is near, well … the Cushendun Caves where Melisandre’s infamous shadow baby scene was filmed. 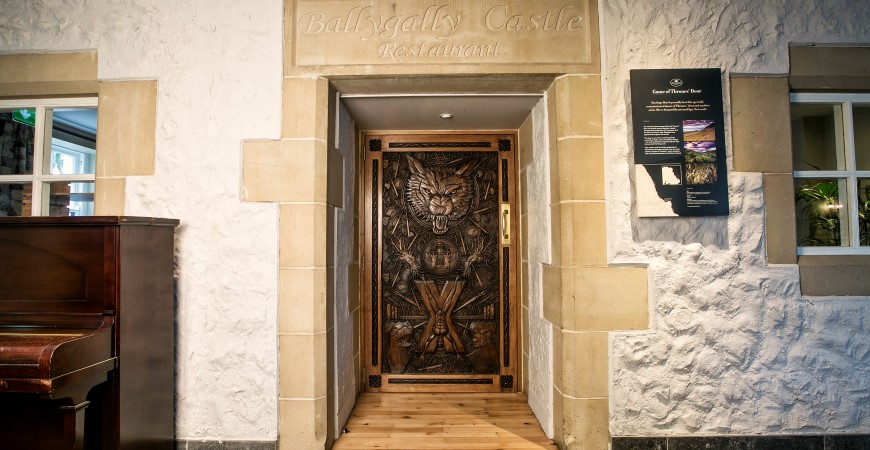 It’s only fitting that one of the doors went to an actual castle. Ballygally Castle was built in 1625 and now serves as a hotel near Cairncastle (the site where Ned executed a Watch deserter in the pilot), Carnlough Harbour (where Arya’s daring escape into Braavos’ canal in season 6 was filmed), The Glens of Antrim, Sallagh Braes and Shillnavogy Valley. 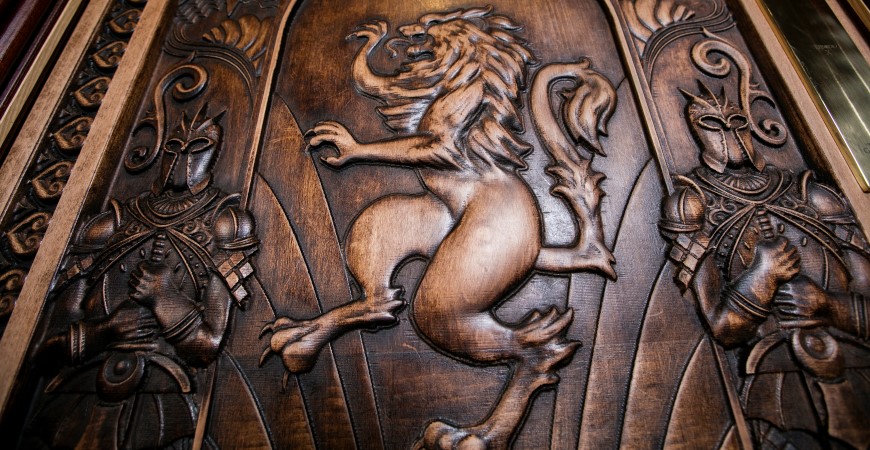 The Dark Horse is a coffee house in Belfast’s Cathedral Quarter. Though it’s not close to any one filming location, the door was placed in a Belfast establishment to honor the city for all the ways it has supported the production of Game of Thrones.

To ease your itinerary making process, Discover Northern Ireland has provided a downloadable Passport with the name, description and address of each of the locations listed above.

In other news, Siobhan Allan, the co-founder of The Extras Dept, the agency through which Game of Thrones hires its extras, spoke to the Belfast Telegraph about the unexpected journey of her would-have-been “wee part-time” business.

Allan founded The Extras Dept 10 years ago when her daughter was struggling to find 250 extra for a Maeve Binchy adaptation she was working on. Though business was tough-going at first, Game of Thrones was what really set them on their way.

“It was pretty big that HBO, one of the biggest production firms in America, was leaving the US for the first time and coming to Northern Ireland, and we got that opportunity,” Allan said. “Over those 14 weeks, we had to make sure we did everything well. If they asked us for six dwarfs and one amputee, we always managed to get what they were looking for, even if it seemed impossible.”

Business has expanded considerably since then. Last year Allan and her team had to balance season 7 of Game of Thrones with 6 other productions which were all running at the same time.

The Extras Dept’s next big venture is moving business to Dublin. “We already have 2,000 extras on our books in the city,” Allan said. “But we would still like to get some more.

As for advice for anyone interested in becoming an extra, Allan is straight forward about the feasibility of supporting oneself: “We always tell people, ‘Don’t give up your full-time job’, but some of our extras also get paid very well. It depends on continuity.”