Dave Benioff and Dan Weiss on preparing for the end of 'Game of Thrones' | Watchers on the Wall | A Game of Thrones Community for Breaking News, Casting, and Commentary 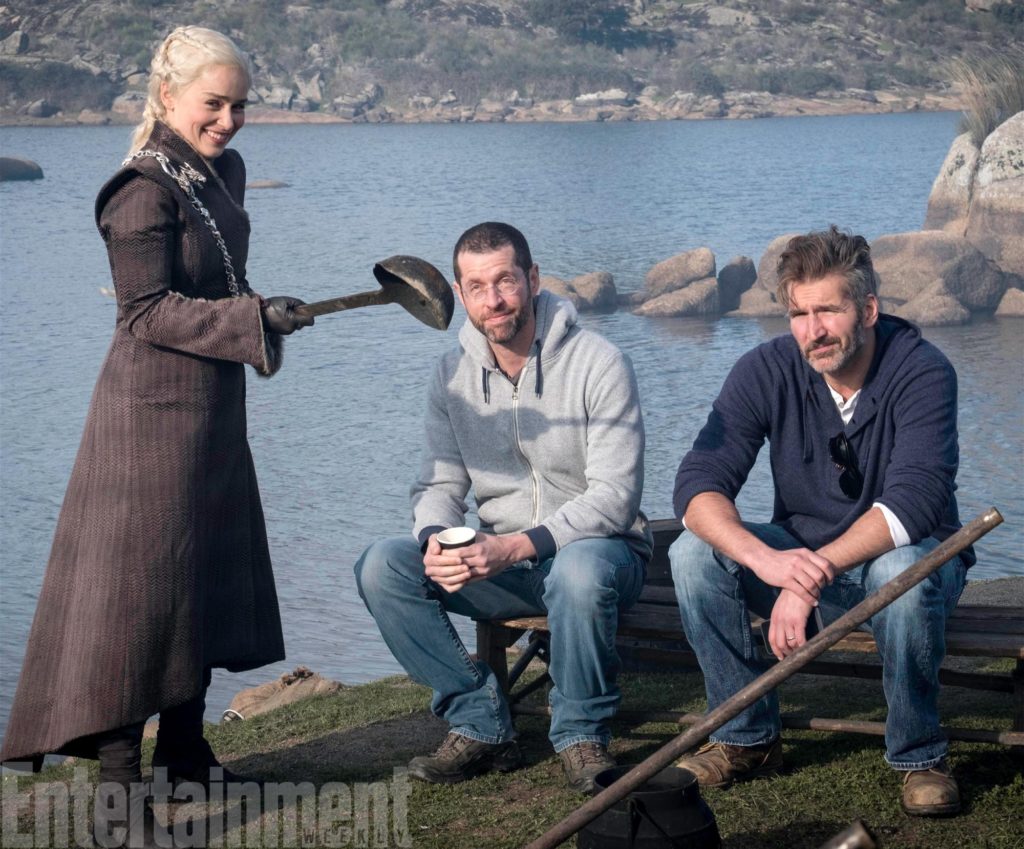 Thinking about the end of something is never preferable, especially when it’s the end of the global phenomenon that is Game of Thrones. Ironically, though, knowing how you’ll wrap things up while you’re still in the thick of it (or even before you get started) is one of the most necessary aspects of storytelling — something that showrunners Dave Benioff and Dan Weiss know well.

In a recently-published article from EW that was written back in 2015 during Season 6 filming but not released until now, Benioff and Weiss talked about the ending of Thrones (sort of, anyway) and how they’ve had to plan for it from a filming standpoint — and how they would feel when a decade-long chapter of their lives finally comes to a close.

EW’s James Hibberd was visiting the set as the crew was preparing to burn down the temple of the Dosh Khaleen in Season 6, at a point when “Benioff and Weiss were still a couple of seasons away from being finished, but were now beginning to seriously think about the end.”

“They’d decided the fates of every major character. Sometimes they gave actors cryptic suggestions when filming certain scenes, with those final episodes in mind,” Hibberd writes. “The actor didn’t know why they were doing something a certain way, only that it was somehow important. After Thrones is finished, fans will look back and see subtle hints that were dropped.”

Hibberd noted that there were “some fears” among the showrunners, like the private concern that one of the show’s major cast members would quit or fall victim to some random tragic circumstance. So many actors were becoming “absolutely essential” that “If something had happened to them, or if they decided not to do it anymore, to make movies, we would be screwed,” Benioff said.

As to how the pair felt about the creation they’ve poured so much into coming to an end, they had understandably emotional responses.

“If you’re going to spend 10 years working on one show, you better really love the people you work with, because you’re spending a sh—load of time away from your family and friends,” Benioff said. “You always put everything into it. So to spend time on a show that people respond to all over the world, it’s incredibly gratifying. You have these characters you love and you can come up with ideas for them, and a few months later these incredible actors will be saying those things. That’s such a rare gift.”

Weiss was quiet for a bit before answering. “If 10 years ago somebody had given me a chance to write a ticket, I wouldn’t have been crazy enough to write a ticket to something this great,” he said. “I just think about how bizarre it will be to not be doing this anymore, because it becomes the water you swim in. It becomes every minute of every day, 365 days a year, this show is on your mind or in your life. After it’s done, it will be like re-entering some weird universe where I don’t even know how people act there anymore.… When I’m 75 years old, I’m going to be [affecting a quivering, elderly voice], ‘You know, it would be great if Tyrion said… Ah, goddamn it!’”

Hibberd writes that there was also “relief and sadness” on the part of Benioff and Weiss, who put enormous amount of year-round work into the show. “They don’t just pen the scripts while filming happens somewhere else. They’re on set every day, for long hours, neck-deep in decision-making that impacts every aspect of what’s seen on-screen,” he writes.

“It’s the best job I’ve ever had, or ever likely will have,” Benioff told Hibberd. “But it certainly doesn’t get easier.”