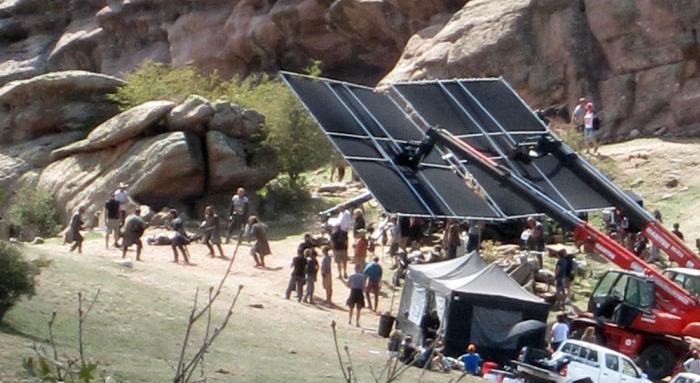 Game of Thrones is shooting in Campillo de Dueñas, Guadalajara, Spain this week, at the impressive Castillo de Zafra. La Tribuna de Albacete notes the secrecy of the shoot, with the security guards patrolling a four-kilometer perimeter. But onlookers have still come, evidenced by the leaked photos and videos. Apparently this weekend, a man even broke his leg on nearby rocks trying to reach the castle.

The webite also reports that the Three-Eyed Raven- Max von Sydow– is in Guadalajara, along with Isaac Hempstead Wright, confirms that the film crew arrived last Friday at Castillo de Zafra to prepare for the shoot and that the people involved in the Game of Thrones shooting have been staying in Teruel.

Speaking of videos, here is the newest video of the Tower of Joy filming! We saw one yesterday courtesy of Los Siete Reinos, and today a new one was posted on Facebook.

This video is chock full of spoilers.

The footage shows rehearsal or filming at the Castillo de Zafra, with actors/stuntmen performing a fight. I’d guess based on the actions we’re seeing in the video that these three are meant to be young Ned Stark, Howland Reed, and Ser Arthur Dayne.

The rotated, fight portion of the video-

(This video has been taken down or made private)

The longer form of the video, which is sideways, and not probably labeled correctly- at 7:50 where it says “Aemon Targaryan,” he may have actually spotted and heard Max von Sydow.

The man who took the video seems to be assuming it’s Sean Bean but I don’t think you can actually tell from that distance. The man in the scene is dressed in typical Ned clothing but may be a younger actor who just resembles him. Bean also recently denied taking any part in season 6-though we can’t always believe cast members when they claim this. (Looking at you, Harington.)

Thanks to WotW readers Bran is Bae and caliopesnow for bringing this info to our attention!