The Greyjoy fleet lands on Basque shores & A tense reunion takes place (UPDATED!) | Watchers on the Wall | A Game of Thrones Community for Breaking News, Casting, and Commentary 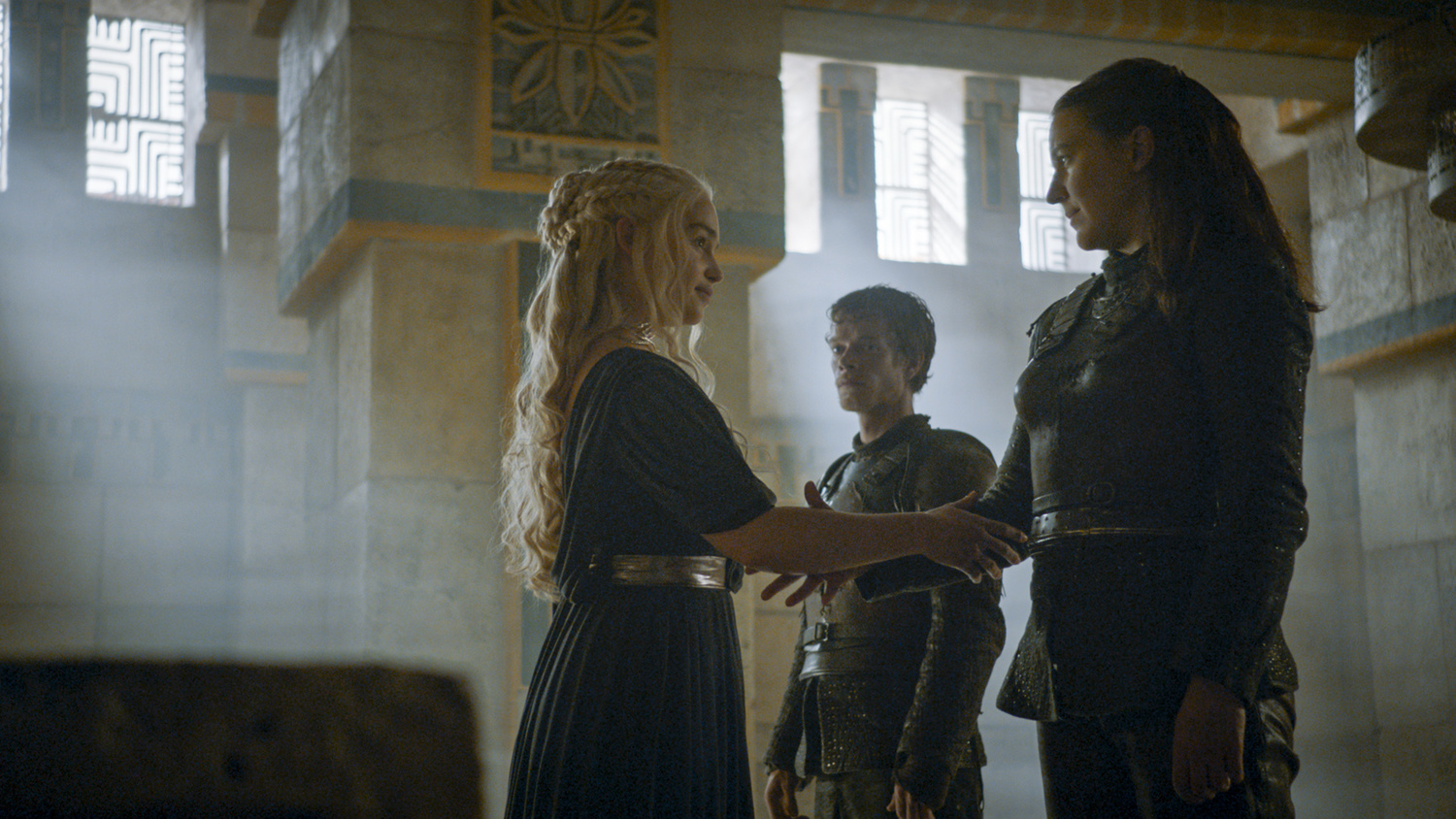 In Zumaia’s Itzurun beach, yesterday was a productive first day’s work for the Game of Thrones production and curious onlookers alike. Today promises to be no different. Yet again, the Santa Klara country house graces us with video footage of the second day of production, and with it spoilers galore. Abandon hope all ye who enter here!

Before we get into today’s shoot, let’s return for a moment to yesterday’s scene, in which Tyrion, Missandei and Qhono welcome Jon and Davos to Dragonstone, and the King in the North and the Hand of the Queen share a formal handshake. We now have many new pictures of the first North-South encounter in a new gallery courtesy of ZIMBIO: 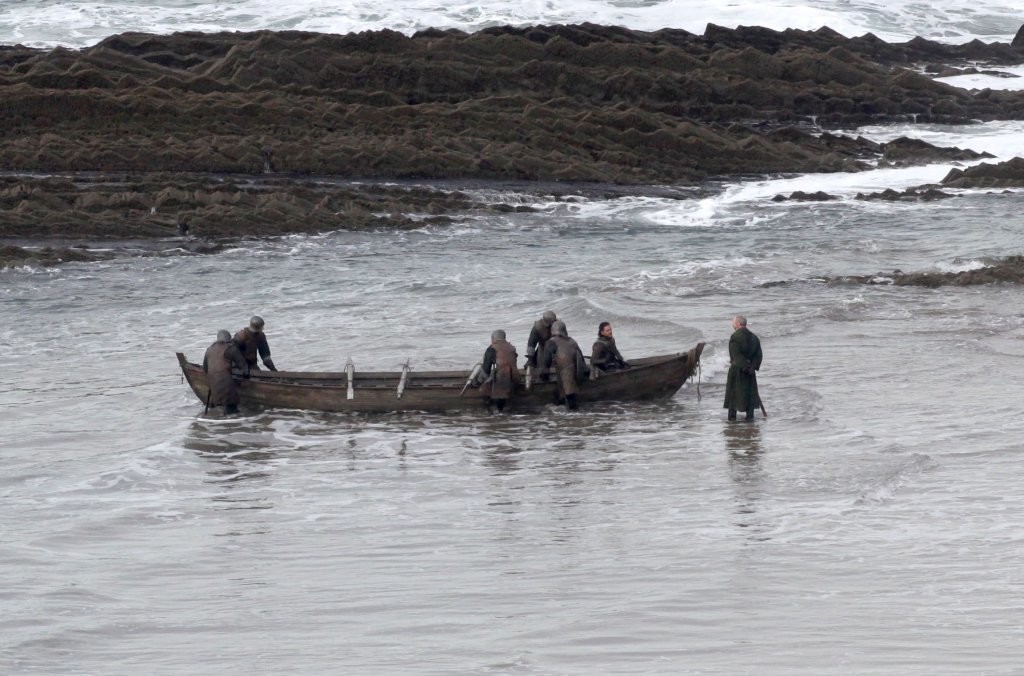 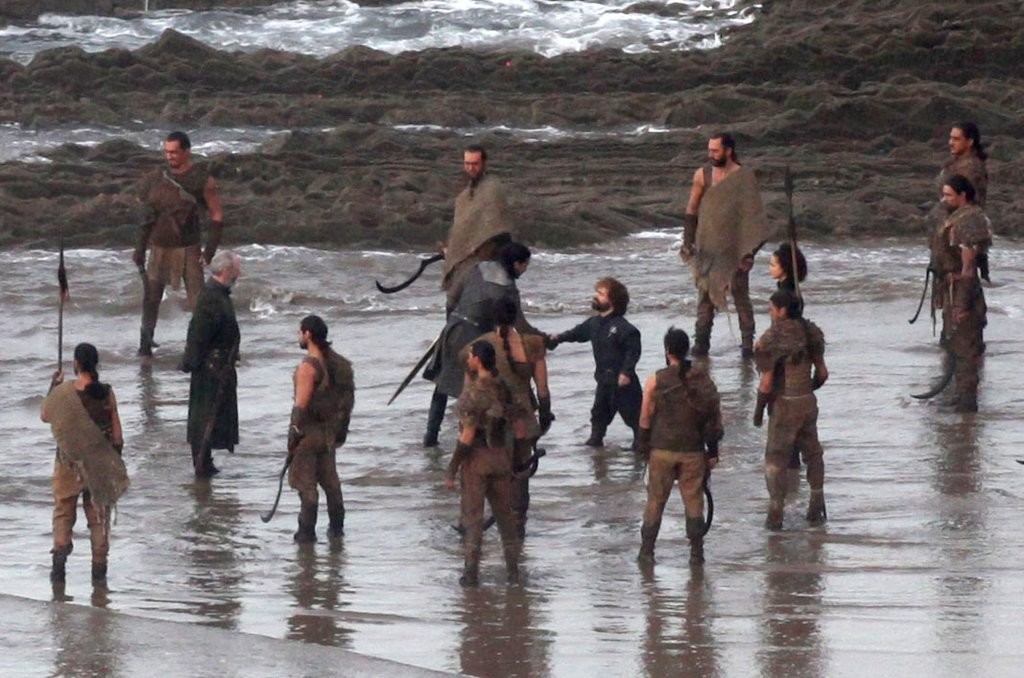 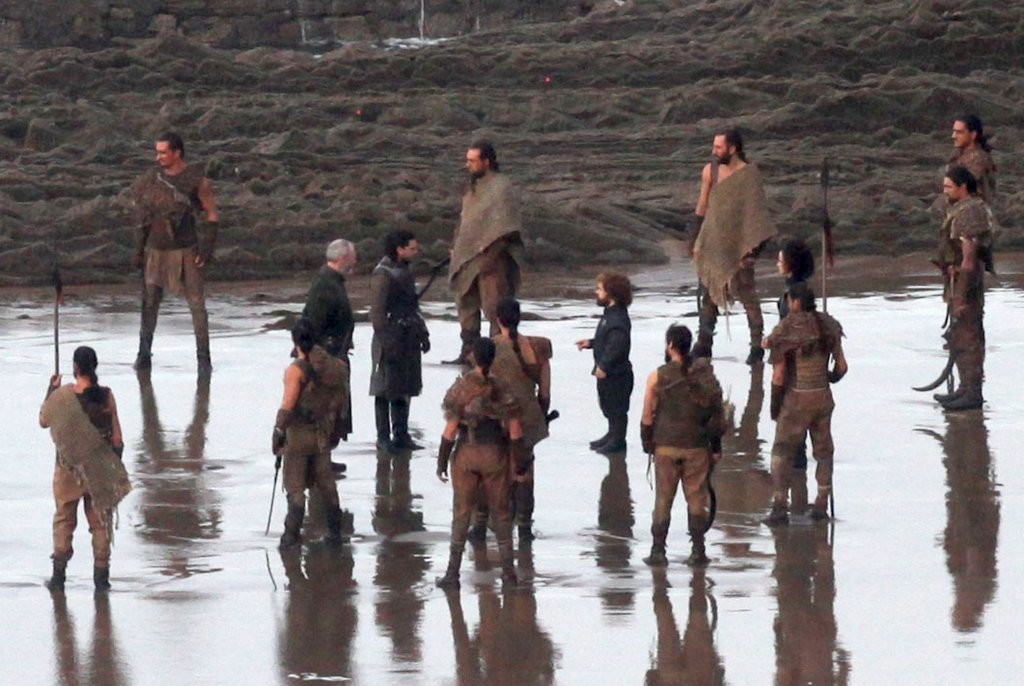 Meanwhile, today Alfie Allen made his first appearance on set. We already knew Theon would probably be involved in at least one of these Zumaia scenes, considering he was spotted a few days ago in Bilbao, but now we know much more. In Santa Klara‘s video footage, we are witness to the single-take filming of a scene in which Jon, Davos, Missandei and a few Dothraki welcome the just arrived Theon and some ironborn in the shores of Dragonstone. “Welcome” may not be the most appropriate term, however:

As one might expect, Jon has some choice words for the man who betrayed Robb and took Winterfell by force. Jon grabs Theon by the lapels (literally and figuratively), and while we cannot hear what he is shouting at him, it’s probably nothing particularly nice. Fortunately for Theon, the King in the North contains himself. Instead of escalating the conflict, Jon goes off in a huff. The Greyjoy prince is lucky he was feeling magnanimous!

If you really want to feel Jon’s wrath, here is a closer view of the aggression brought to us by The Daily Mail, with photographs taken by PAP4U. The pictures show Alfie Allen, Kit Harington, Liam Cunningham, and showrunners David Benioff and D.B Weiss: 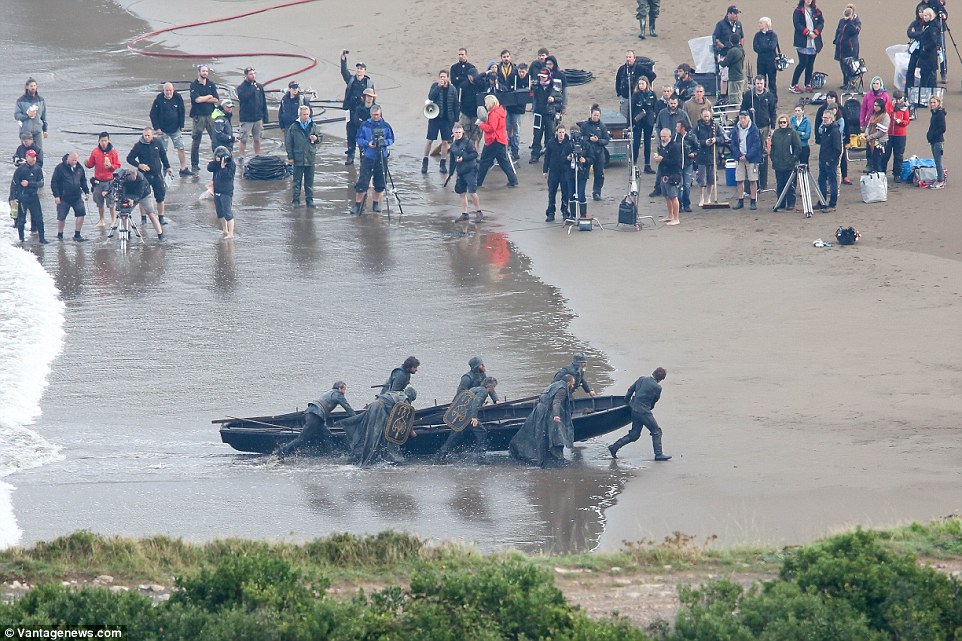 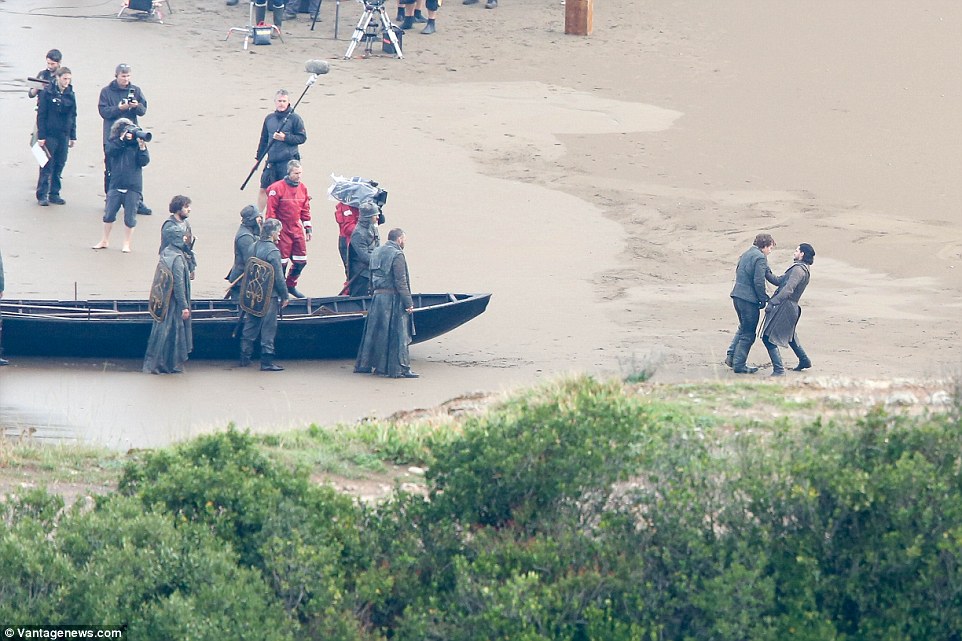 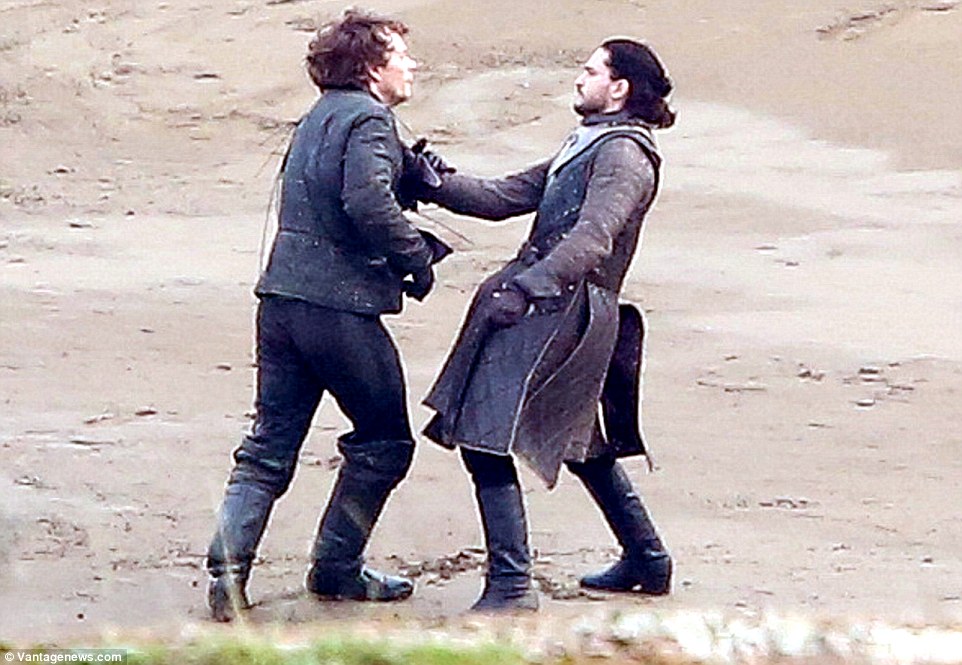 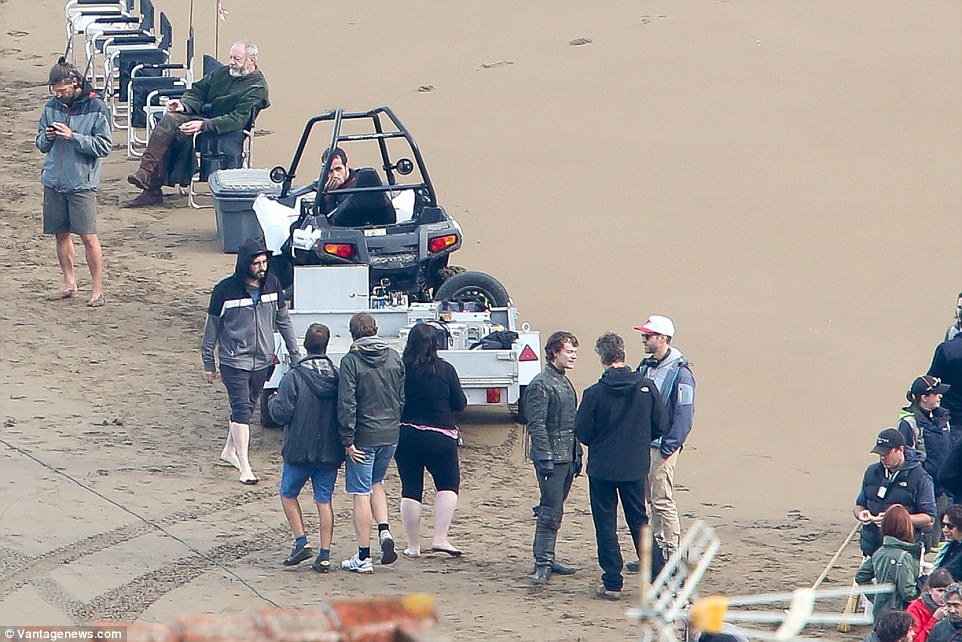 Obviously, at this point in the seventh season Jon has already met Daenerys and is already in Dragonstone, which leaves us to wonder where Theon has been hiding. Is he just returning from the much teased naval battle against his mad uncle Euron, or is that yet to come for him and his sister Yara? Give us your thoughts in the comments!