Filming kicks off in Zumaia & MAJOR SPOILERS leak out despite tight security (UPDATED) | Watchers on the Wall | A Game of Thrones Community for Breaking News, Casting, and Commentary 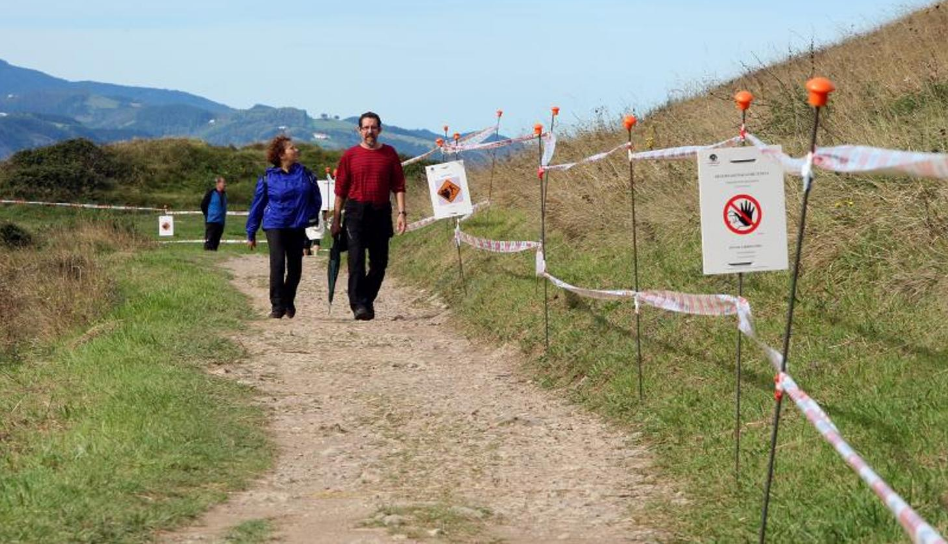 With the eventful filming in Biscay‘s Muriola and Gaztelugatxe concluded as of last week, and Emilia Clarke‘s thirtieth birthday celebration in-between, the cast and crew moved to Gipuzkoa and have begun shooting this morning in Zumaia’s Itzurun beach. They will end on Saturday the 29th, and then move on south, but until then we have a whole week of filming. Security measures are particularly tight, but we still have video footage of the first meeting of certain main characters taking place in the beach.

El Diario Vasco reports on the commencement of filming and the impact it has had on the community, both positive and negative. On the one hand, the routine comings and goings of the locals have been heavily restricted by the production, particularly in the neighborhood that surrounds Itzurun beach, Larratxo: Only those who actually live in this district are now able to circulare freely. Not only the beach set and surrounding cliffs but the entire neighborhood has been cordoned off by the municipal police and the the Basque Country’s very own police force —The Ertzaintza or “People’s Guard.”

On the other hand, the company in charge of production in Spain, Fresco Films, made sure to employ as many local people as possible, especially amongst the unemployed. They also bought all materials for their props in Zumaia and the nearby provincial capital of San Sebastián, as well as packing the hotel businesses in the area with their hundreds of workers. Furthermore, Zumaia’s businesses have taken advantage of the event to refurbish their shops with appropriately themed merchandise and decorations. 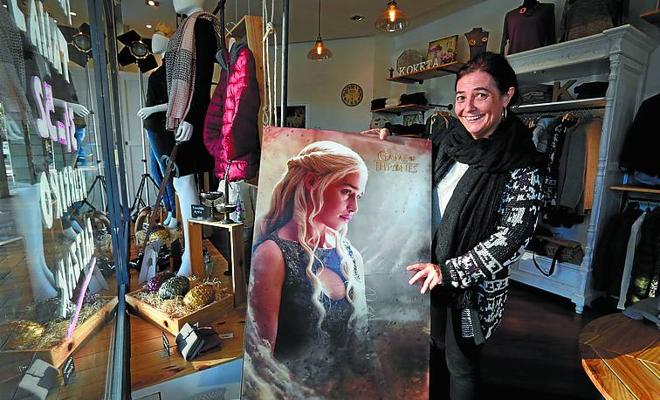 Fresco Films also specified the number of extras that are being employed. Of the 800 hopefuls that queued on the morning of October 10th (quite a cold morning, I can attest to that), only 300 candidates were selected. Now we know how many of these actually got the job: There are only 20 extras, as that is what the script requires. On top of that, a number of professional oarsmen from the Telmo Deun club are being employed to carry the characters and extras to shore in the boats we properly saw yesterday.

Now, what are these oarsmen and extras being used for exactly? Is Itzurun beach supposed to be part of Dragonstone, just like Gaztelugatxe? Let’s go to the footage most of you are probably waiting for and find out. It should go without saying that there are major spoilers from here on out, but just in case: MAJOR SPOILERS from here on out! 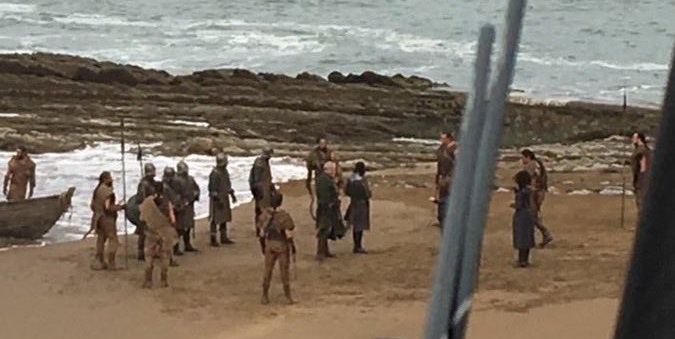 Indeed, Itzurun joins the previous Basque locations in serving as the show’s depiction of the lands that surround the great castle of Dragonstone. What’s more, video footage and photographs have turned up of the scenes being filmed, mostly taken from Santa Klara, a local country holiday home that overlooks the bay. As many of us suspected, they are filming at least one scene: the arrival of Jon Snow and Davos Seaworth to the Daenerys-held castle. The King in the North, accompanied by Davos and a guard of Northern soldiers, is greeted by Tyrion, Missandei and some Dothraki, who take care of their boats once they arrive. Though this cannot be discerned in these videos, El Diario Vasco reports that, upon disembarking, Jon and Tyrion share a formal handshake.

The Unsullied are absent, as are the Queen’s Westerosi allies. However, the Greyjoys will probably make an appearance in these Zumaia scenes, because just yesterday Alfie Allen was spotted coming out of his hotel in Bilbao with his fellow cast members. Gemma Whelan, who plays Yara Greyjoy, has not been spotted yet, but Theon is certainly in play:

UPDATE #1: More images surfaced from today’s filming, starring Kit Harington, Peter Dinklage, Liam Cunningham, Nathalie Emmanuel and Staz Nair (as the bloodrider Qhono), courtesy of The Daily Mail. The following is a selection of their gallery: 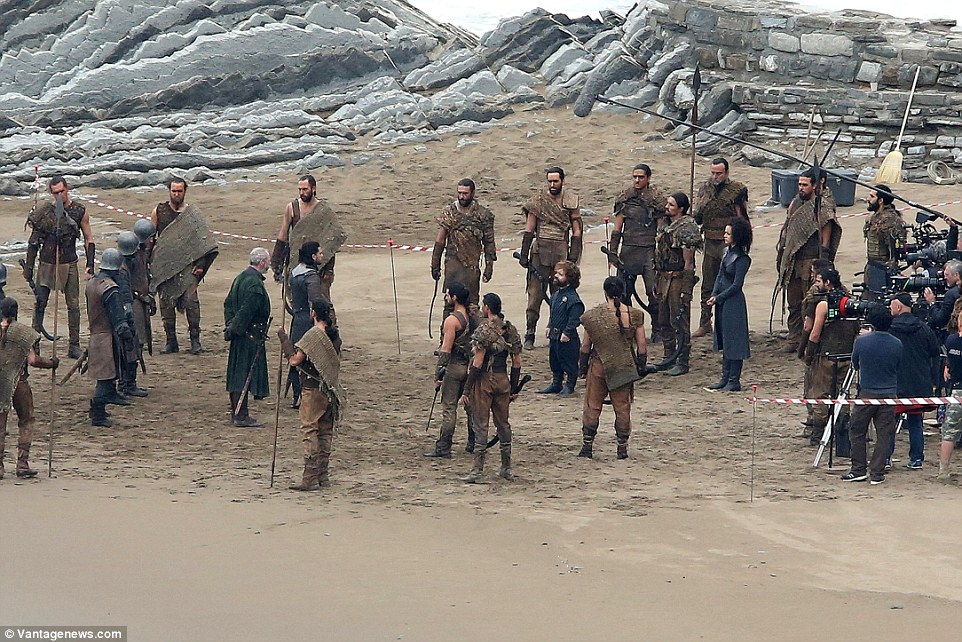 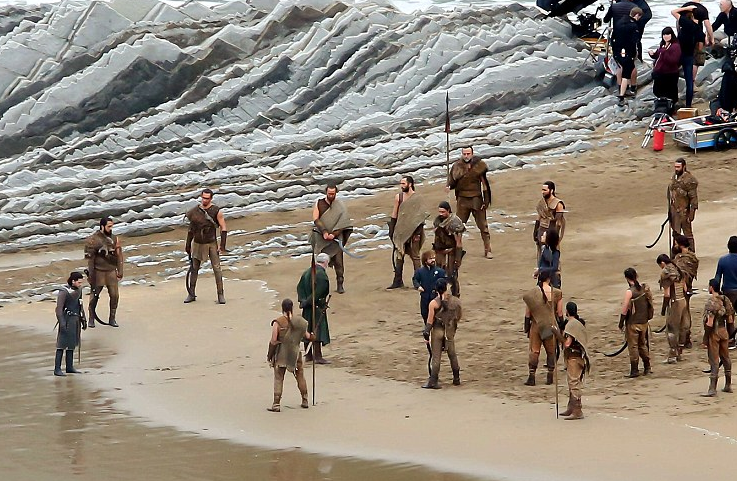 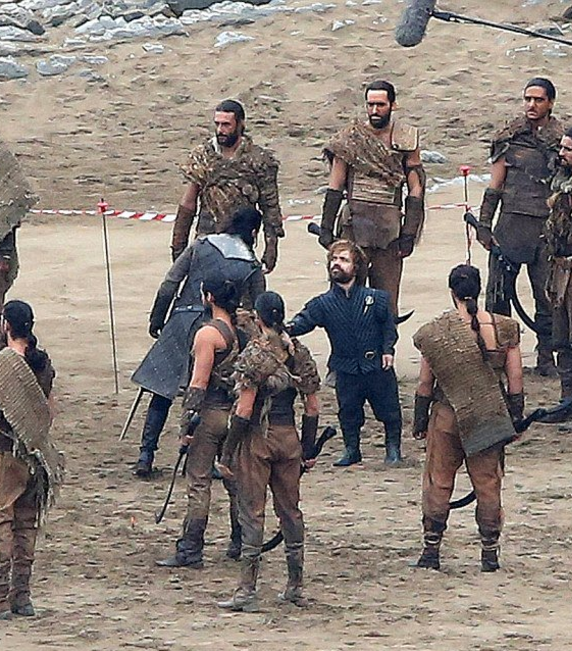 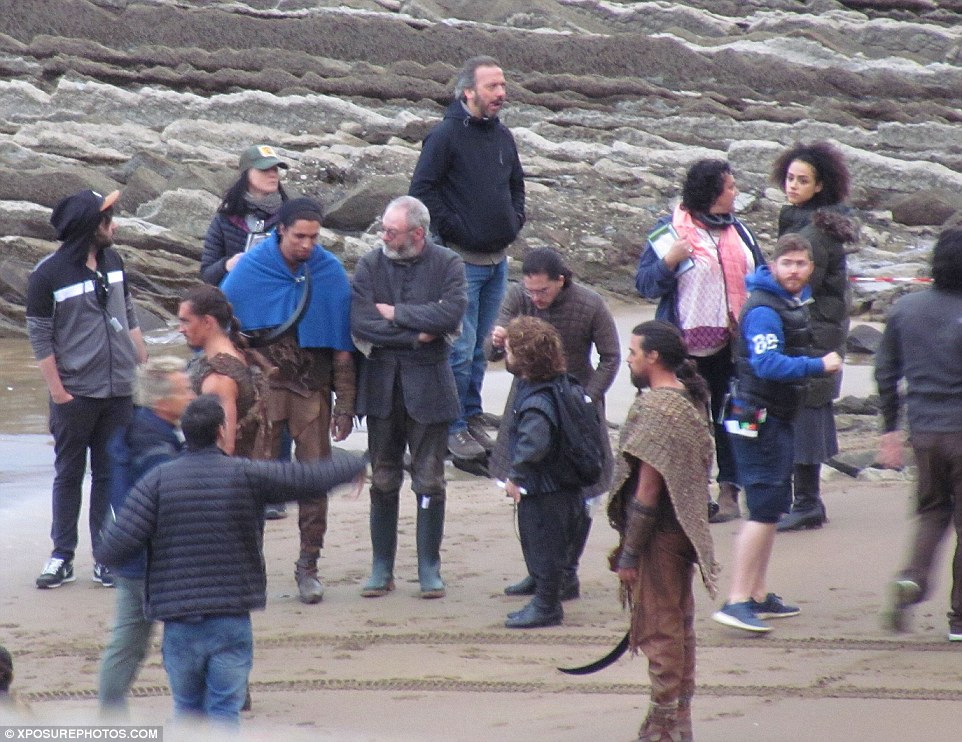 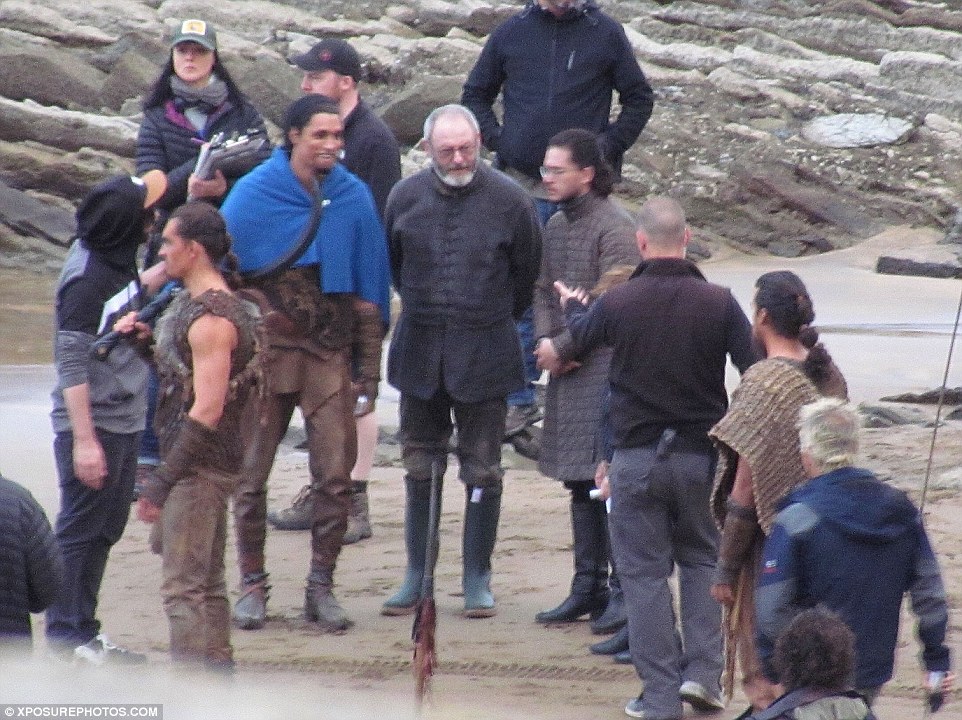 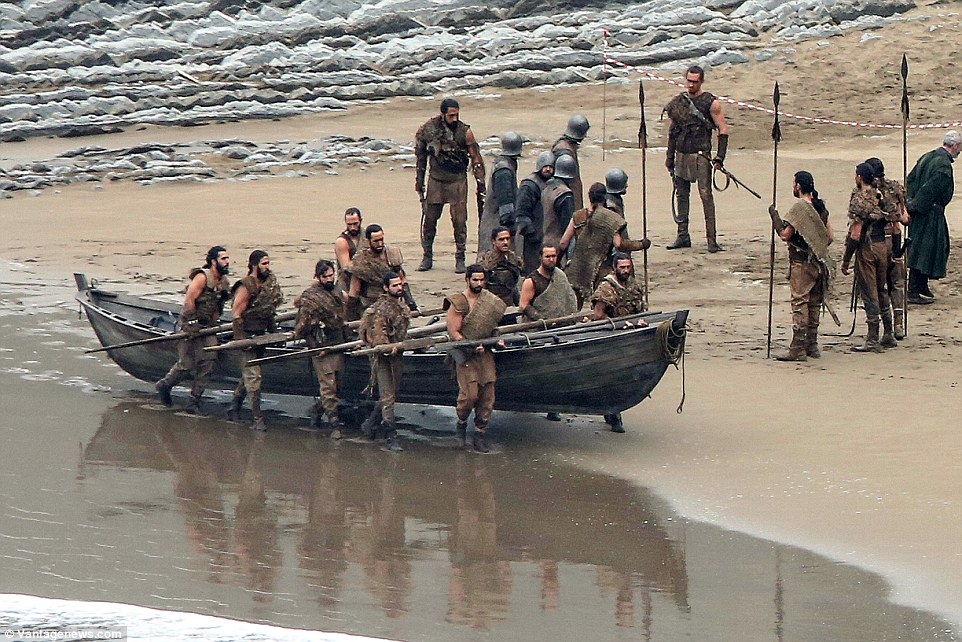 UPDATE #2: The Sun now provides us with a much better view of the Dragon Queen. Emilia Clarke is sporting a beautiful new reddish dress. She was wearing the same outfit in Gaztelugatxe, and The Sun also shared quite a few new pictures from last week’s filming there, so this new one is also probably from last week, not from Zumaia: 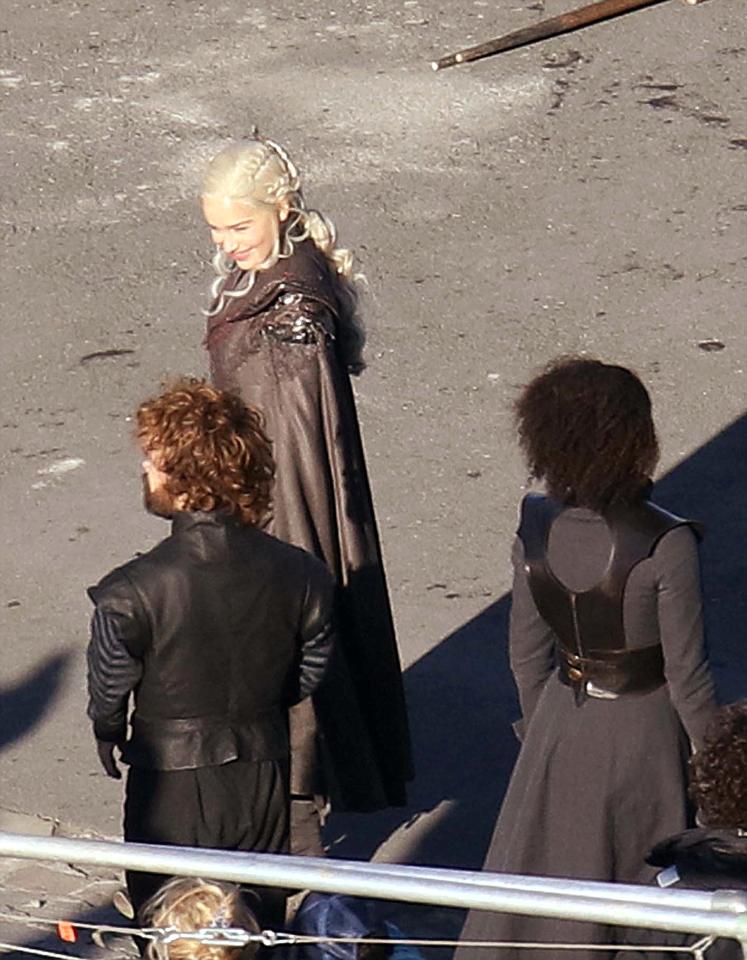 UPDATE #3: One of the zoomed-in photographs shows Liam Cunningham talking to Mark Mylod, which tells us he will direct Jon’s arrival to Dragonstone and probably his meeting with Daenerys too. Thanks to Jenny in the comments for the tip! 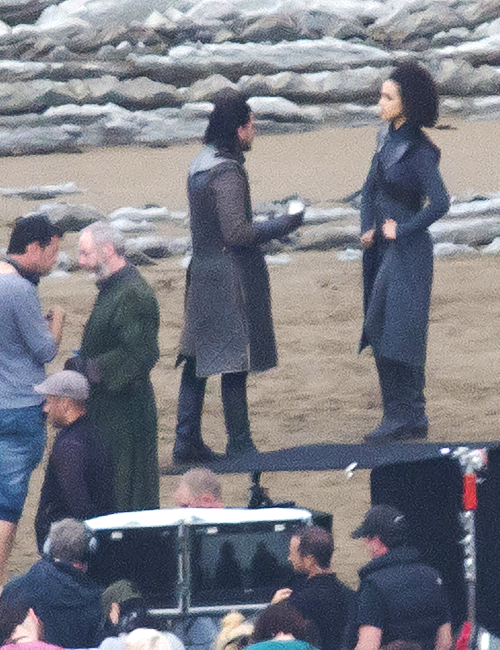 And a few more! Shared by our friend Alikat: 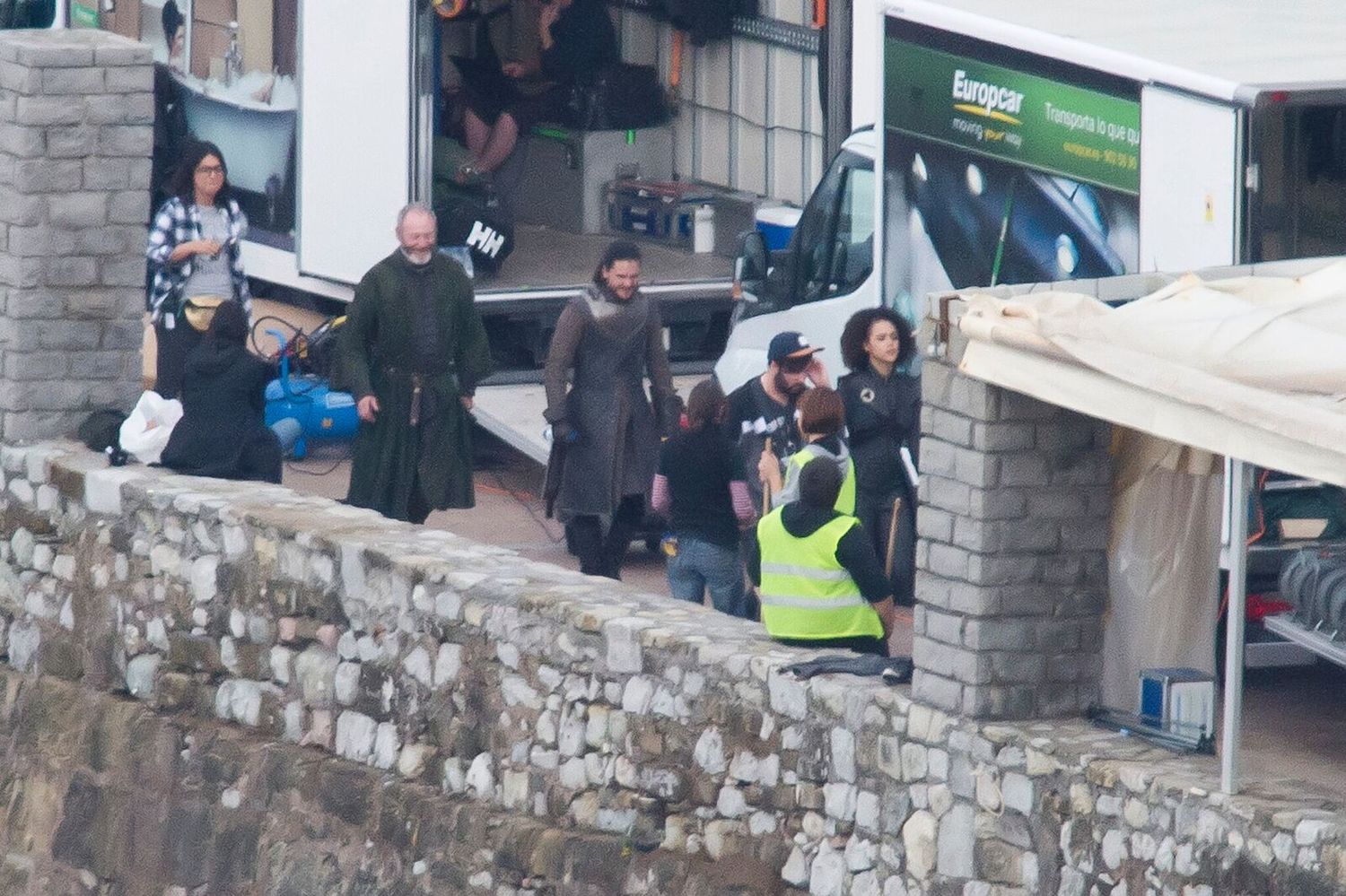 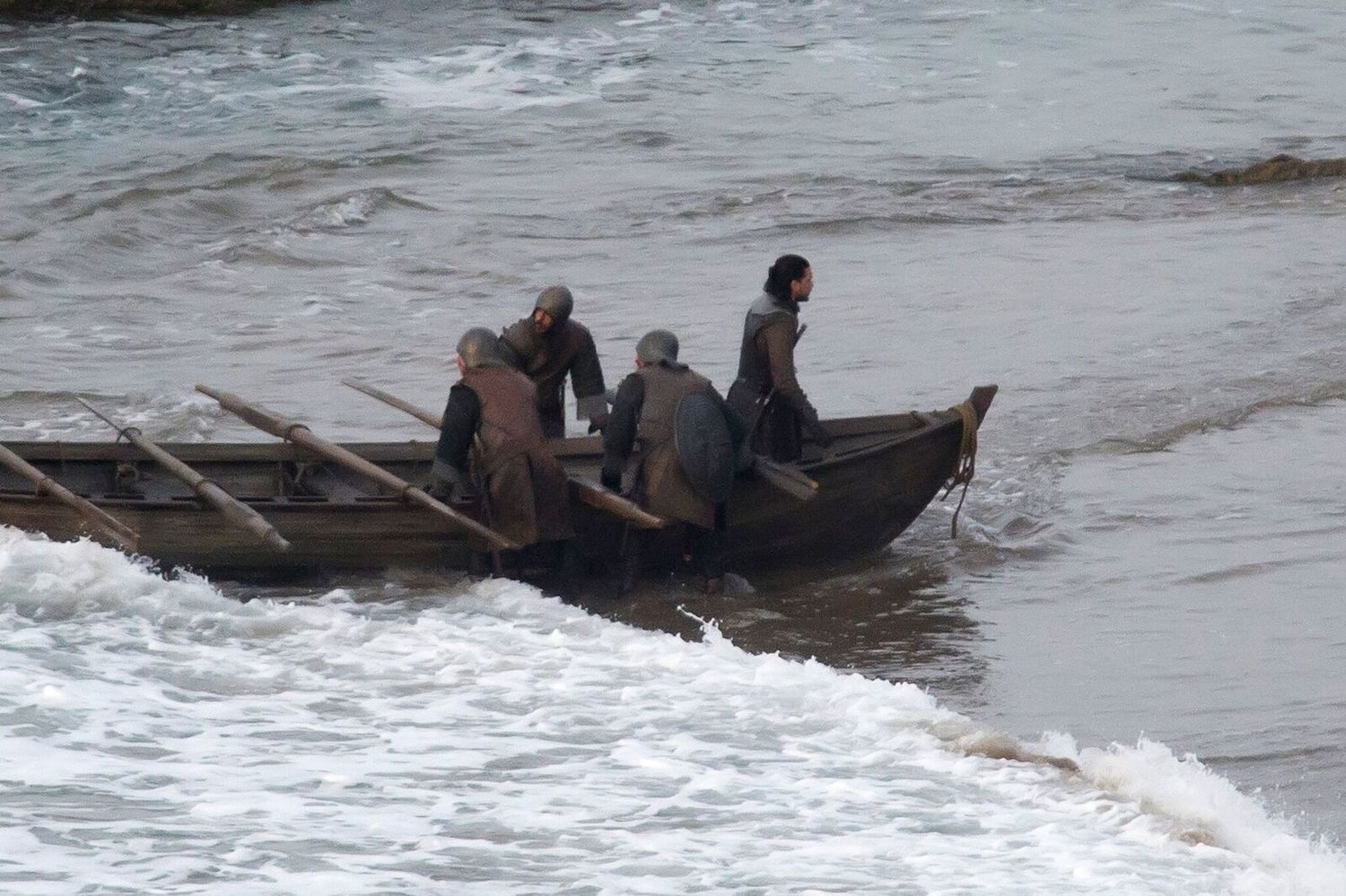 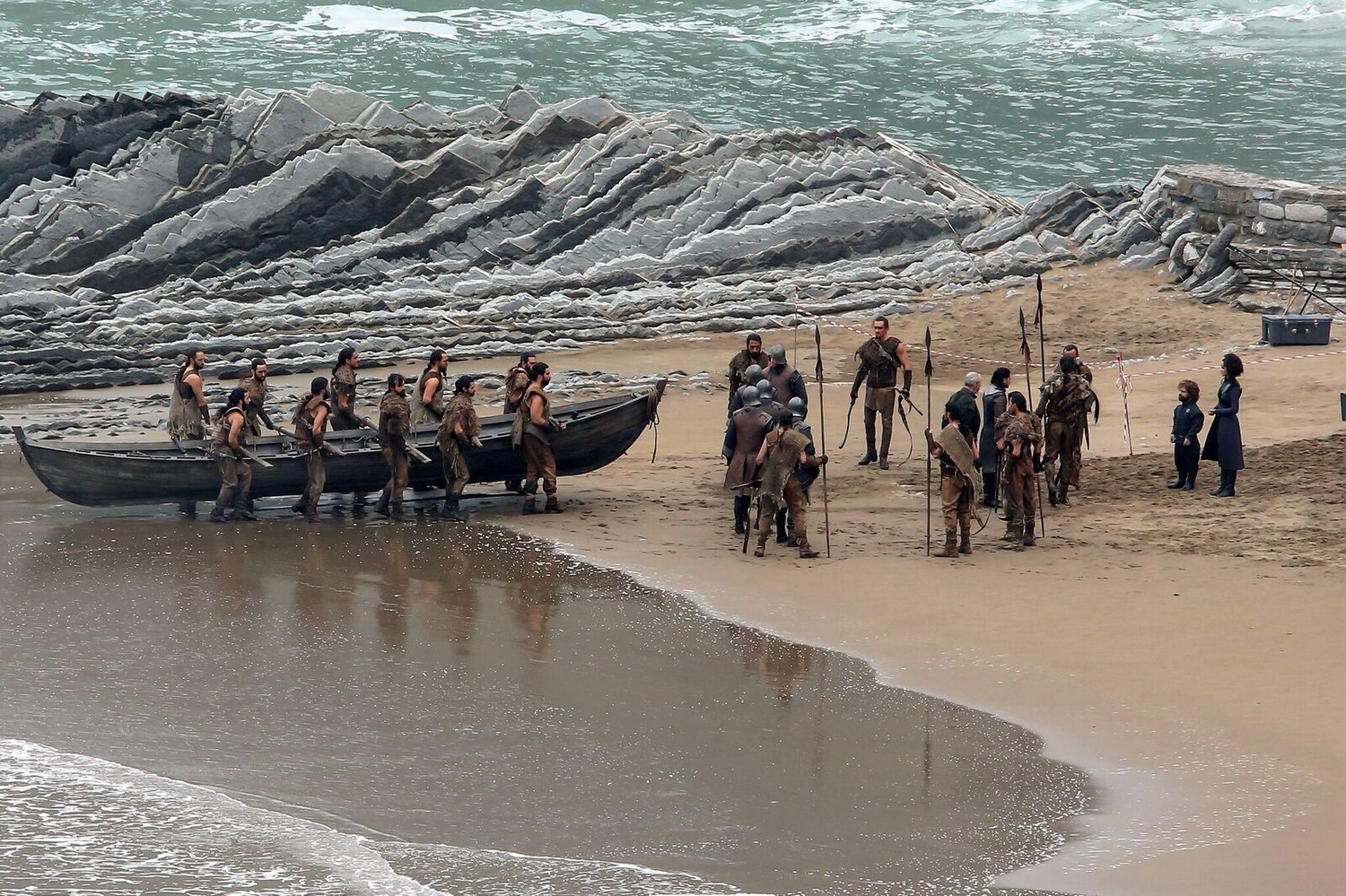 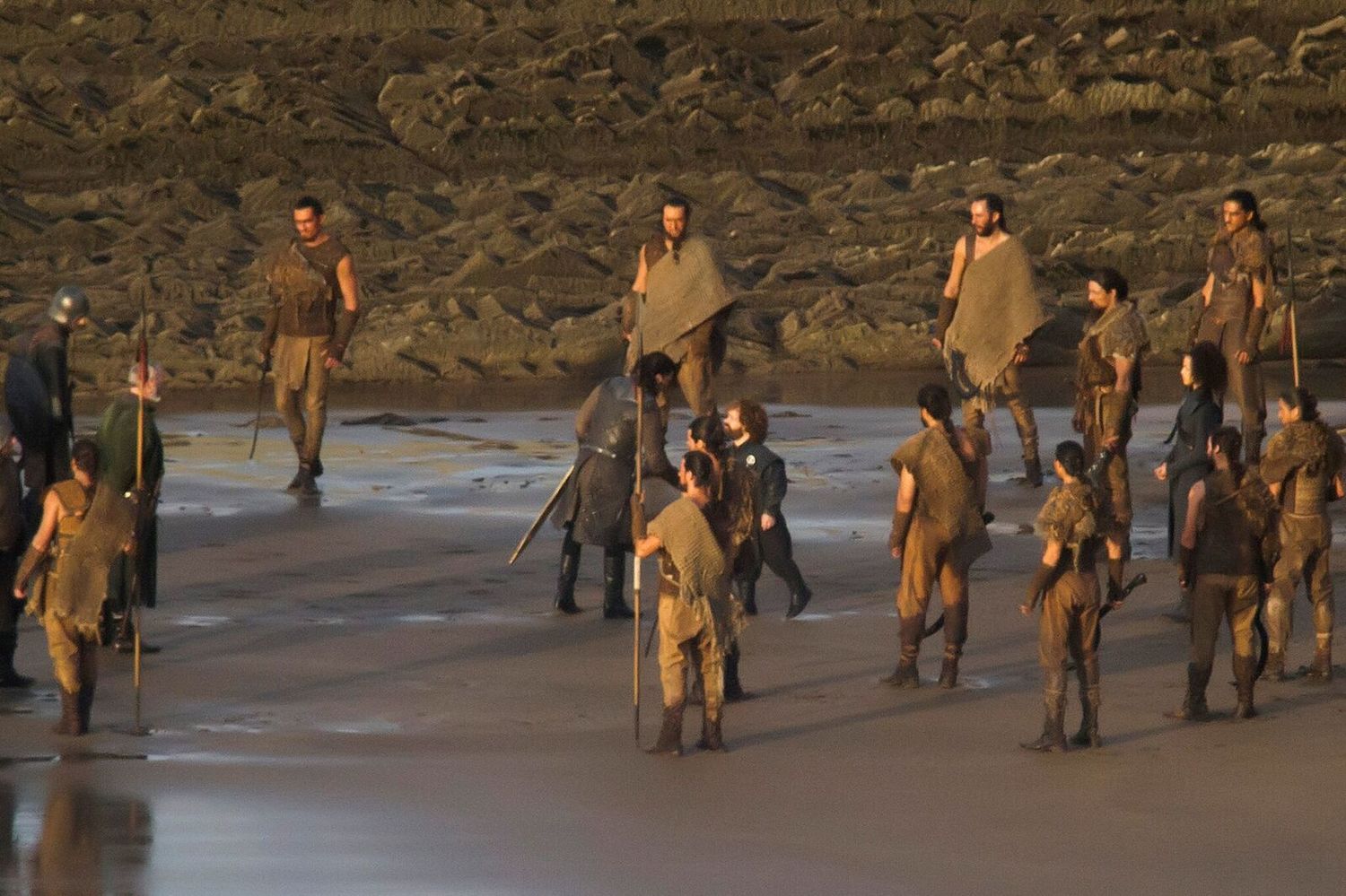 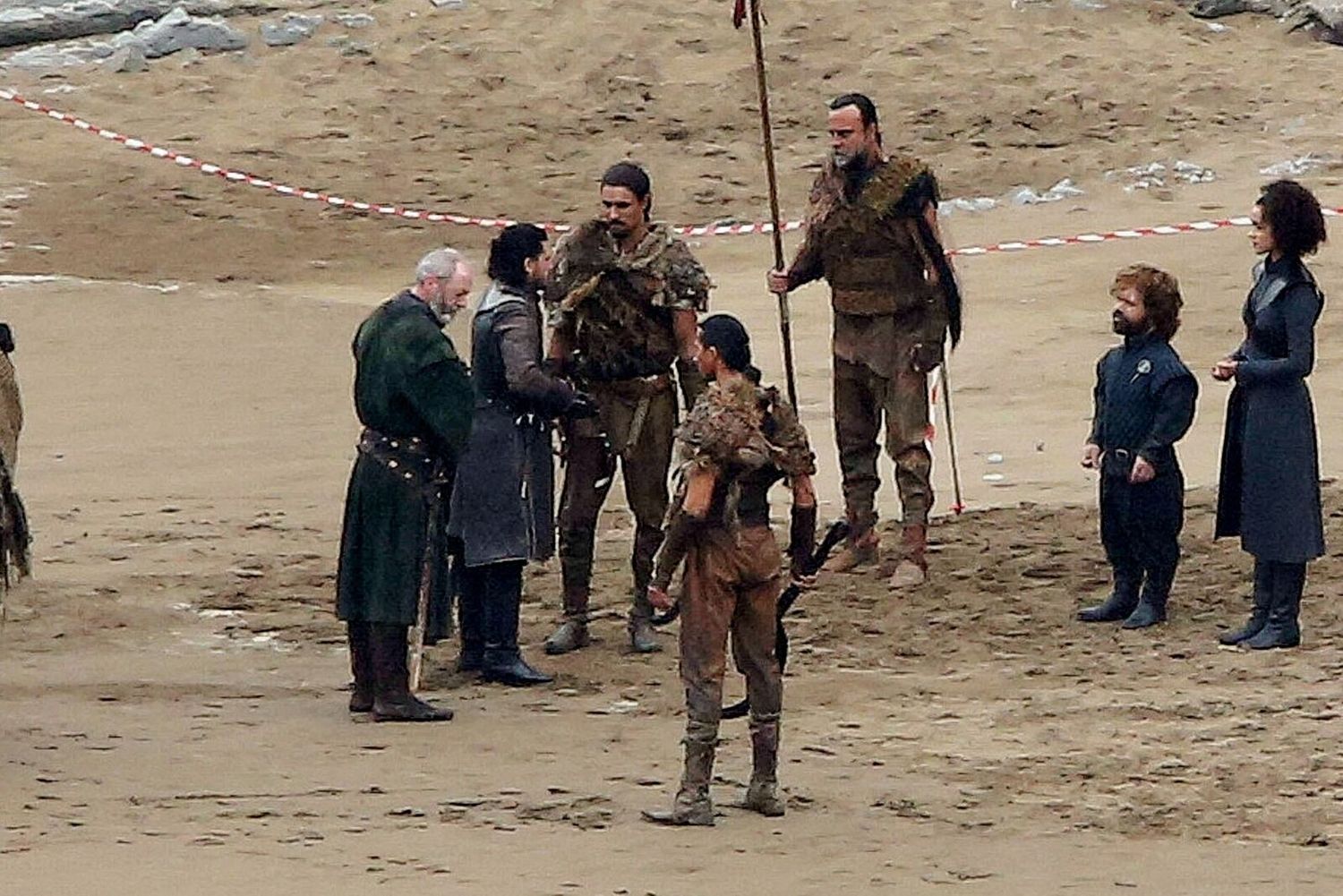 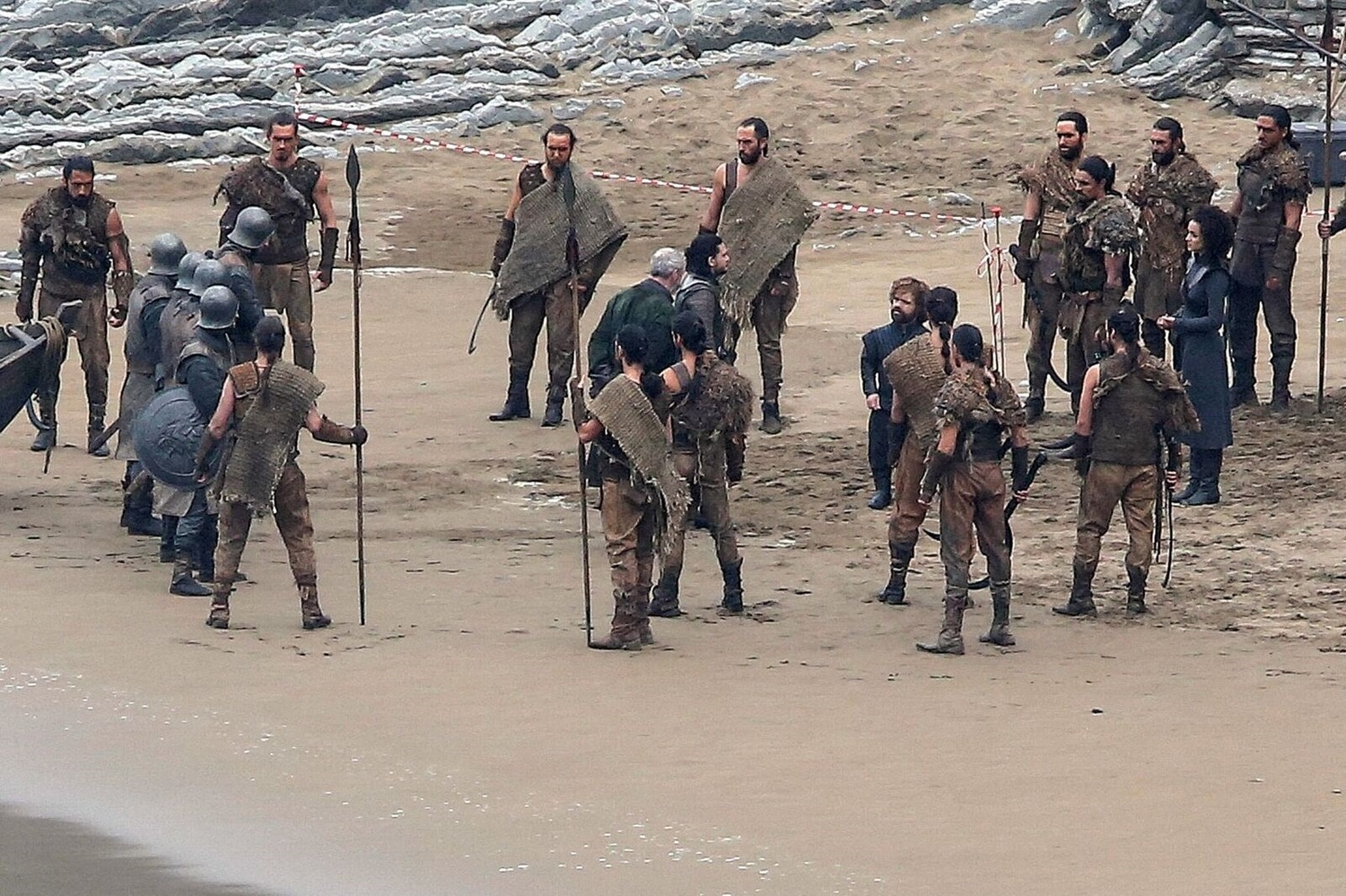 Though we already knew these characters would meet, it’s nice to witness the moment. It seems that Jon and company will arrive in the shores of Dragonstone (that is, Zumaia) and then go up the stairs (that is, Gaztelugatxe) to the castle with the Targaryen crew. So, what are your thoughts on this momentous occasion? Are you as excited as I am to see Jon and Tyrion catch up? What would a Missandei-Davos conversation look like? How will Jon and Daenerys get along? Please theorize in the comment section!