The spectacle of Game of Thrones is famed and infamous. We can never forget the wildfire that spread across Blackwater Bay, our wide eyes reflected in Tyrion’s (Peter Dinklage) shocked horror at what the “pig shit” was capable of. We were quietly terrified when the Night King raised his army at Hardhome. We were sure that Jon (Kit Harington) might very well drown in a sea of stampeding bodies at the Battle of the Bastards because that’s the kind of show this is. Now we have the Battle of Winterfell, perhaps the biggest battle to rule them all.

What makes battle sequences tick from a writing perspective are the characters within them. It is one thing to write pure spectacle and that in and of itself is quite difficult. Ask a plethora of writers, whether they are writing fantasy, historical fiction, or even a nonfiction recreation of a battle and most if not all will note the immense difficulties that come with that responsibility. There has to be a cohesion in the battle sequences, an ability to visually construct a scene that is thrilling yet not so overwhelming that it becomes a byzantine mess. I have no desire to knock writing that is based on spectacle, for that on its own can be quiet enjoyable.

The visuals are often stunning on Thrones, accompanied always by a gorgeous score from Ramin Djawadi. It’s often a pleasure to look from one scene to the next, just seeing exactly how many screensavers you can garner from just one episode. In “The Long Night” alone there are a plethora of simply gorgeous scenes. The opening charge of the Dothraki is stunning. The shot of Rhaegal and Drogon descending through the full moon lit clouds with Jon and Daenerys (Emilia Clarke) is breathtaking. The colors of Drogon encircling a mourning Daenerys and the body of Jorah Mormont (Iain Glen) are haunting in their elegiac quality. 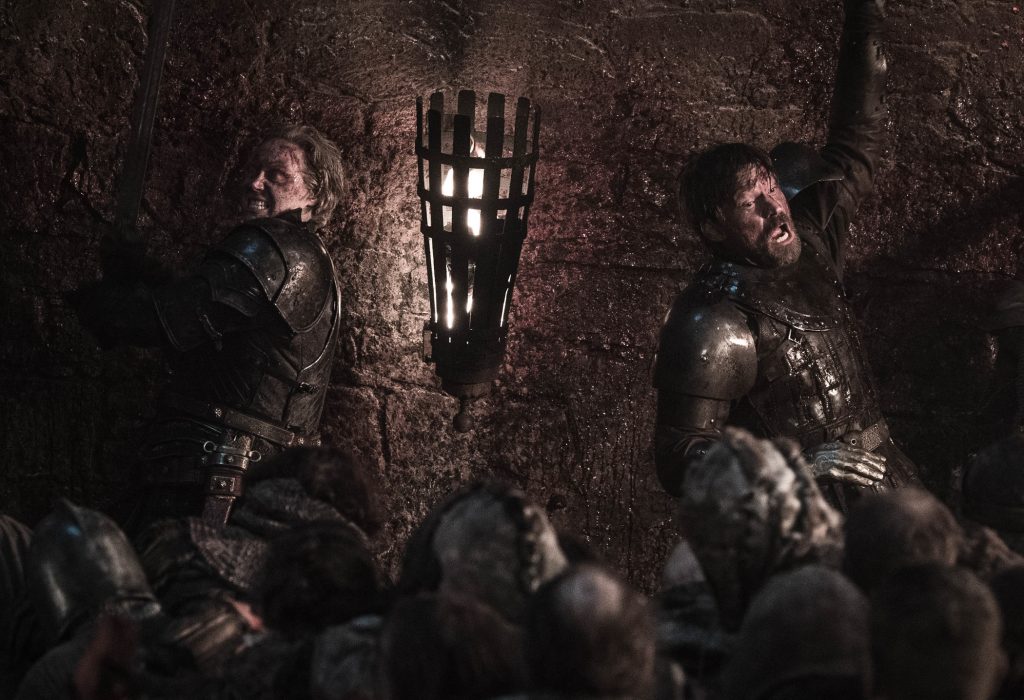 That aforementioned sense of catharsis comes from when writers are able to focus on a character within a battle sequence. That first and foremost requires an ability to understand who these characters are. Would Bronn (Jerome Flynn) be in a particular battle? Why would he be there? How would he act besides self-preservation? Samwell (John Bradley) killed a White Walker but in spite of his bravery at Castle Black, he is not a warrior at heart. Would he be out there, stabbing wights left and right? Probably not. Would Edd (Ben Crompton), in spite of all his camaraderie-laced snaps at Samwell, save his friend’s life and die in the process? Yes, he would.

The Battle of Winterfell ended in ways that I simply did not expect, but what made its internal mechanics click from a writer’s perspective is how the writing weaved characters in and out of the technicalities of the battle sequences and largely in an organic manner. I was tense and stressed not necessarily out of the sheer “ooh and aah” of what was on the screen before me, but out of a concern that far too many of the characters I had come to know and love were going to perish at literally any given moment.

I was the most concerned for Grey Worm (Jacob Anderson). Writing-wise, Grey Worm was in an incredibly difficult position. He was, in a failure of writing to be quite honest, the only member of Dany’s armies we had come to know. He had been given a truly touching romance with Missandei (Nathalie Emmanuel), a romance that had become all the more truly enriched when you remember the sheer trauma and suffering the two of them had gone through together. On a personal level, I wanted this Black love to succeed in spite of all the narrative odds that said a resounding ‘no’. 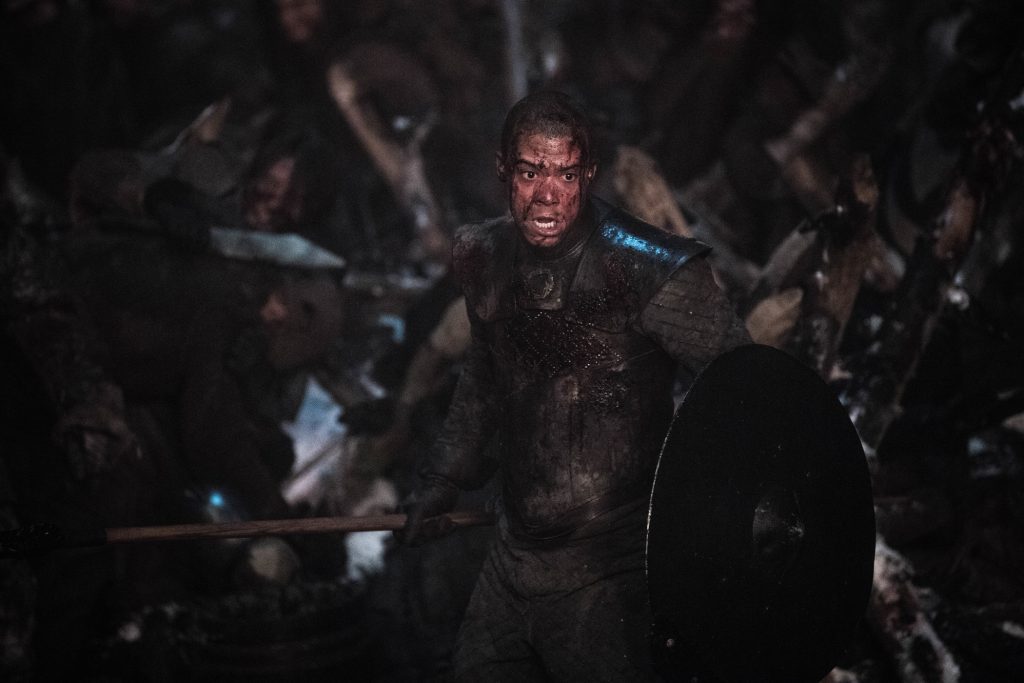 There were several moments when I thought that it was it for Grey Worm. At his heart, Grey Worm is a kind and honorable man with a deeply rooted sense of loyalty and commitment. He is committed to his Unsullied brethren, his Queen in Daenerys and his love in Missandei. His sense of personal attachment to them all is intertwined with his sense of duty towards them. Those moments where I thought he would die worked as the writing required. Grey Worm would absolutely sacrifice himself to light the trenches because that meant that the two most important women in his life would have a better chance at surviving to dawn. It makes sense that he would do so for a tactical reason as a military man, lighting the trenches when the men trying to do so were all falling rapidly bit by bit. I was terrified that he was going to light the trench himself and die after giving the living a better chance at making it to the next day. That’s good writing.

Lyanna Mormont (Bella Ramsey) was intended to be a one-scene character before the showrunners realized just how powerful of a character they had on their hands. The Lady of Bear Island is a child in years, but she is a fierce warrior at heart who stands shoulder to shoulder and indeed quite often, ahead of the grown men who have a socially accepted grip on warriorhood. She is a warrior who would never back down from a fight, but not for any reasons of machismo or wanting to just prove her mettle. She was in a position of leadership and she took that position quite seriously – and if she was going to lead the people of Bear Island, she was going to do it from the battlefield, goddamnit. Plenty of grown adults would have run from that giant, but not Lyanna. She knew that she could muster the strength to take down that giant wight who was going to kill countless others and she did with all of the strength she had left. It was a fitting end for a giant of a leader. 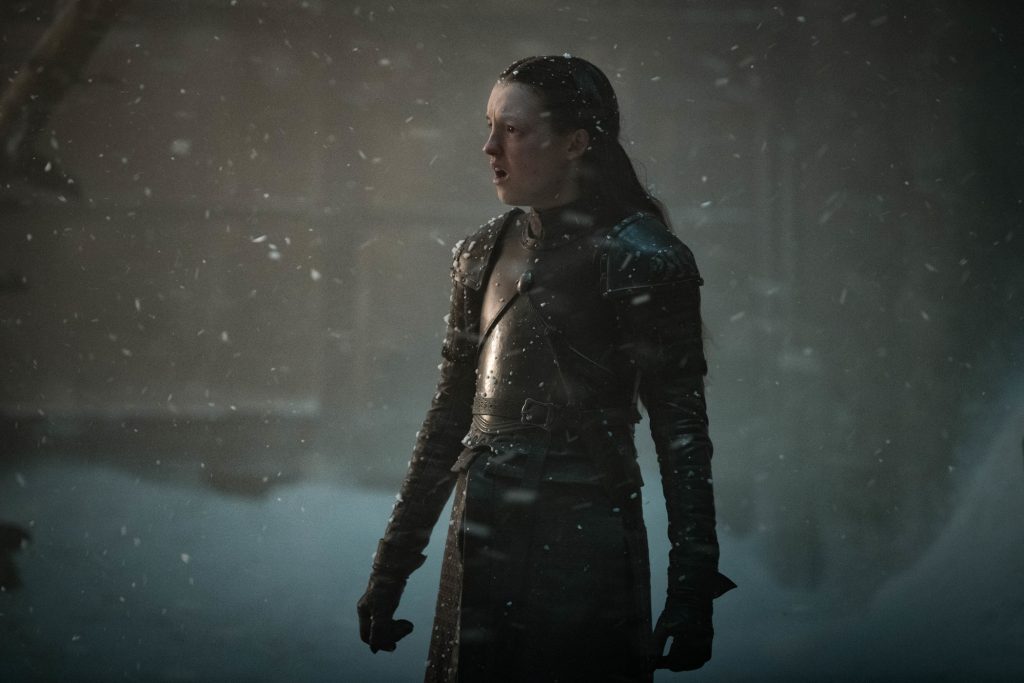 Arya (Maisie Williams) would always be at the front and center of a battle. She has been a warrior of prowess since the beginning of the series, fighting back literally and figuratively against a patriarchal system that did not have any space for who she wanted to be. So she carved out that space. She trained with the fierce Braavosi Syrio Forel (Miltos Yerolemou), she went on a terrifying journey of survival with Yoren (Francis Magee), and fought through the war-ravaged countryside with Sandor (Rory McCann) by her side. She trained to the degree of almost losing her sense of self and for a while her literal sight under the auspices of the House of Black and White and the literal God of Death. It makes complete sense from a writing perspective for her to be the character who, after facing so many variations of Death, is ready to meet its most terrifying harbinger yet head on.

In a story where the narrative was just as obsessed with prophecies and traditions as its characters, it would be Jon who deals the killing blow to the Night King. That may be what a lot of us expected, but it is not what Game of Thrones is. There are certainly plenty of questions that “The Long Night” leaves behind but the writing is more concerned with the living characters than anything else. Game of Thrones is a subversive show in many ways and it certainly challenged the audience yet again with “The Long Night”. But it may have committed its most subversive act yet amidst the spectacle, terror, and melee when a young girl who had been fighting her whole life to be who she truly is was able to become her true self in spite of all the trauma that life had seen fit to throw in her direction. Expectations and prophecies be damned.

Moments like Arya ending the Night King by the same trick she used with Brienne (Gwendoline Christie) in “The Spoils of War” work because the spectacle of it all is lifted by true character heft. This surprise would not have worked if we had not gone on this long, traumatic journey with Arya and watched her learn, fail, and grow. It would not have worked if the writers hadn’t combined those lessons, failures, and growth and applied them to her fight choreography. Seeing Arya victorious works because it combines the best of what Game of Thrones has to offer: layered character work that builds to an earned payoff and the simultaneous subversion of what we have come to expect, even from a show that thrills in writing the unexpected at most of its narrative turns.