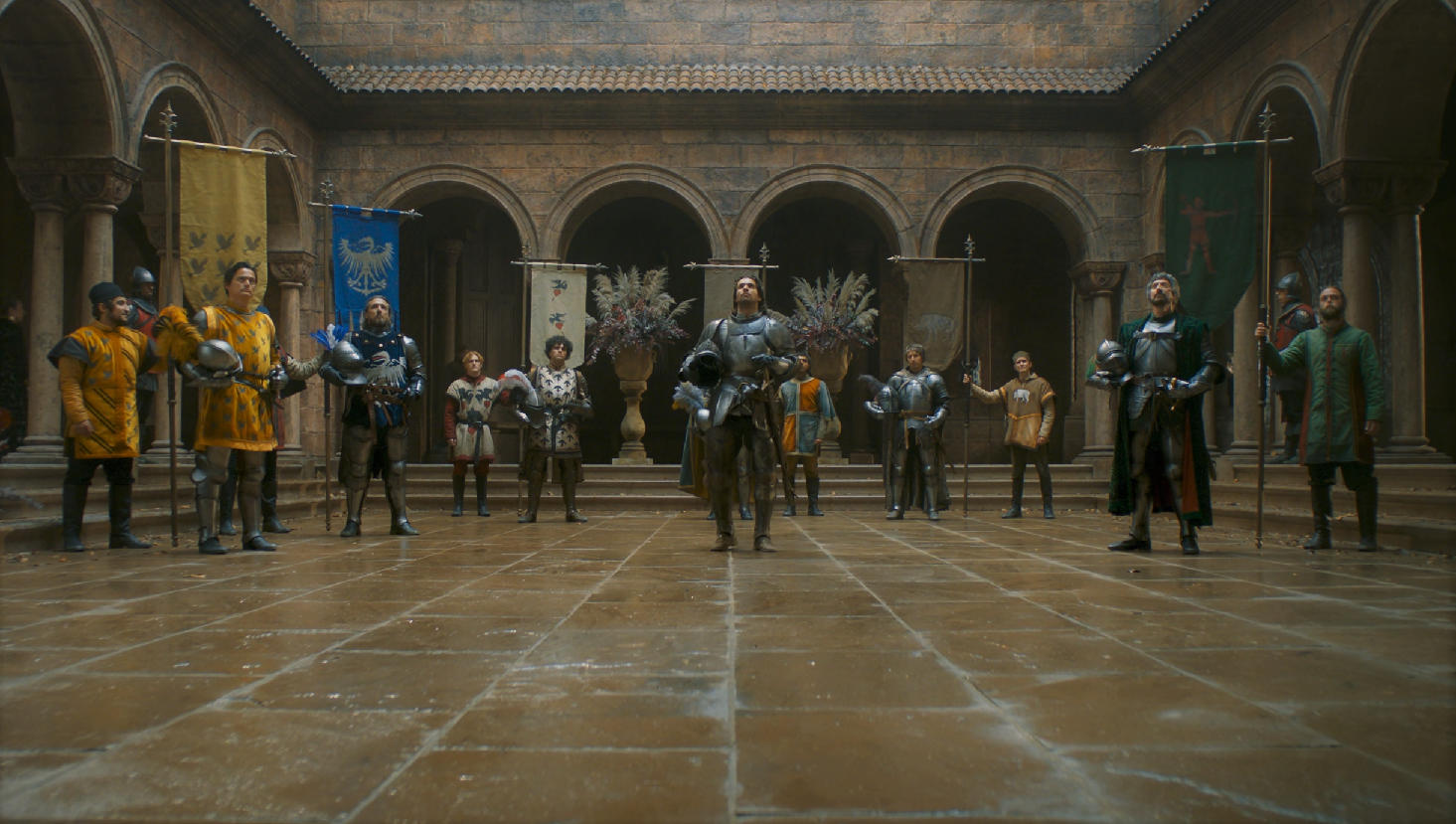 Viserys: Ser Ryam was a strong Lord Commander of the Kingsguard. But he was ill for some time. He passed in peace, I hope.

With the peaceful death of Ser Ryam Redwine, who had served his king long and well, the time was right for the investiture of a new knight, not to take Ser Ryam’s place – Ser Harrold Westerling had been promoted to succeed the old commander. A new knight was required to fill the ranks of the Kingsguard back to its full complement of seven.

Many kings had champions to defend them. Aegon was Lord of the Seven Kingdoms; therefore, he should have seven champions, Queen Visenya decided.
— Fire and Blood, Three Heads Had The Dragon – Governance Under King Aegon I

As a way to keep Princess Rhaenyra from weighing in on immediate and contentious state matters, King Viserys requested that his cupbearer leave a  small council session to attend to the selection of the replacement seventh knight.

Ser Harrold and Hand of the King Otto Hightower had put together a selection of knights, who had won tourneys as a primary indicator of their martial prowess. Rhaenyra, on some initial consideration of candidates, asked if any of the knights had actual military experience on their resumés.

As a happy coincidence, the objectively most-handsome man in the room, Ser Criston Cole, was also a veteran of combat along the Dornish Marches, rather than simply besting knights in jousts and rounding up starving smallfolk. 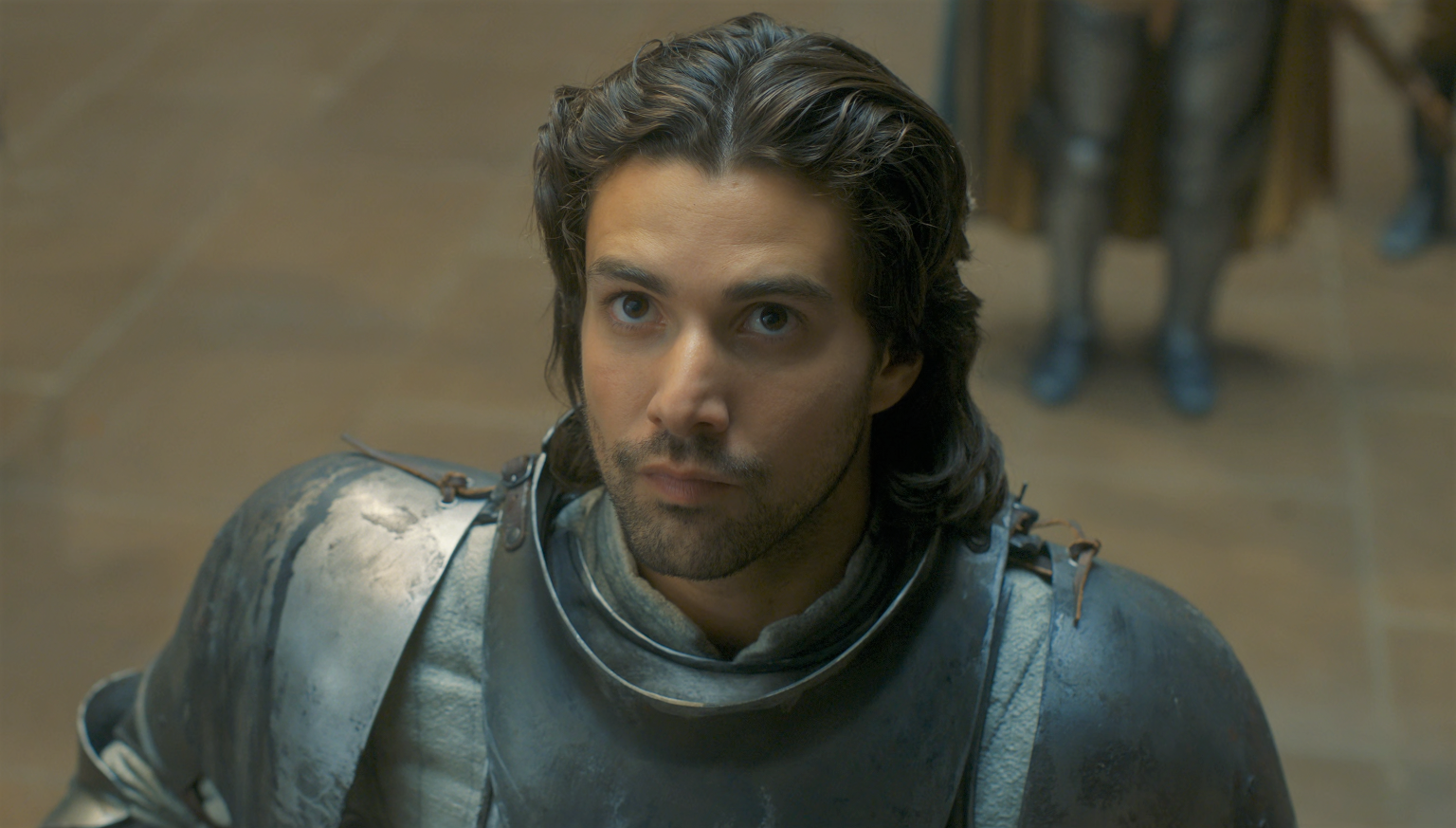 Lord Otto had some misgivings over Rhaenyra’s snap decision in support of  the penniless knight.

Otto Hightower: Let’s not be too hasty, Princess. There’s no doubt that Ser Criston is a fine warrior, but houses such as Crakehall and Mallister are important allies of The Crown. Seagard, for instance, is the realm’s prime defense against reavers from the Iron Islands.
Rhaenyra: These men are tourney knights. My father should be defended by a man who’s known real combat. Should he not?

Rhaenyra’s focus on the most fundamental mission-statement of the Kingsguard, to guard the king, brings to mind the creation of the Kingsguard under the original Targaryen king’s reign: the insistence from Queen Visenya Targareyn that her brother and king Aegon would need to form an elite squad of warriors to act as his protectors. Or else she was going to keep stabbing him.

King Aegon: It’s awesome that I can just walk around, careless of my safety.
Queen Visenya: Bro, I insist that you have some dedicated personal protectors.
Aegon: I hardly think that’s necessa- ouch! You stabbed me!
Visenya: Form an elite squad of protectors and I won’t be able to stab you.
Aegon: Are you going to keep stabbing me until I do what you suggest?
Visenya: Mayhaps.
Aegon: Okay, but lets not make a habit of this policy-via-extortion.
Visenya: No promises.

The primary concern of the Kingsguard is combat-oriented: protect the king from attacks. And, you know, sometimes do other things. 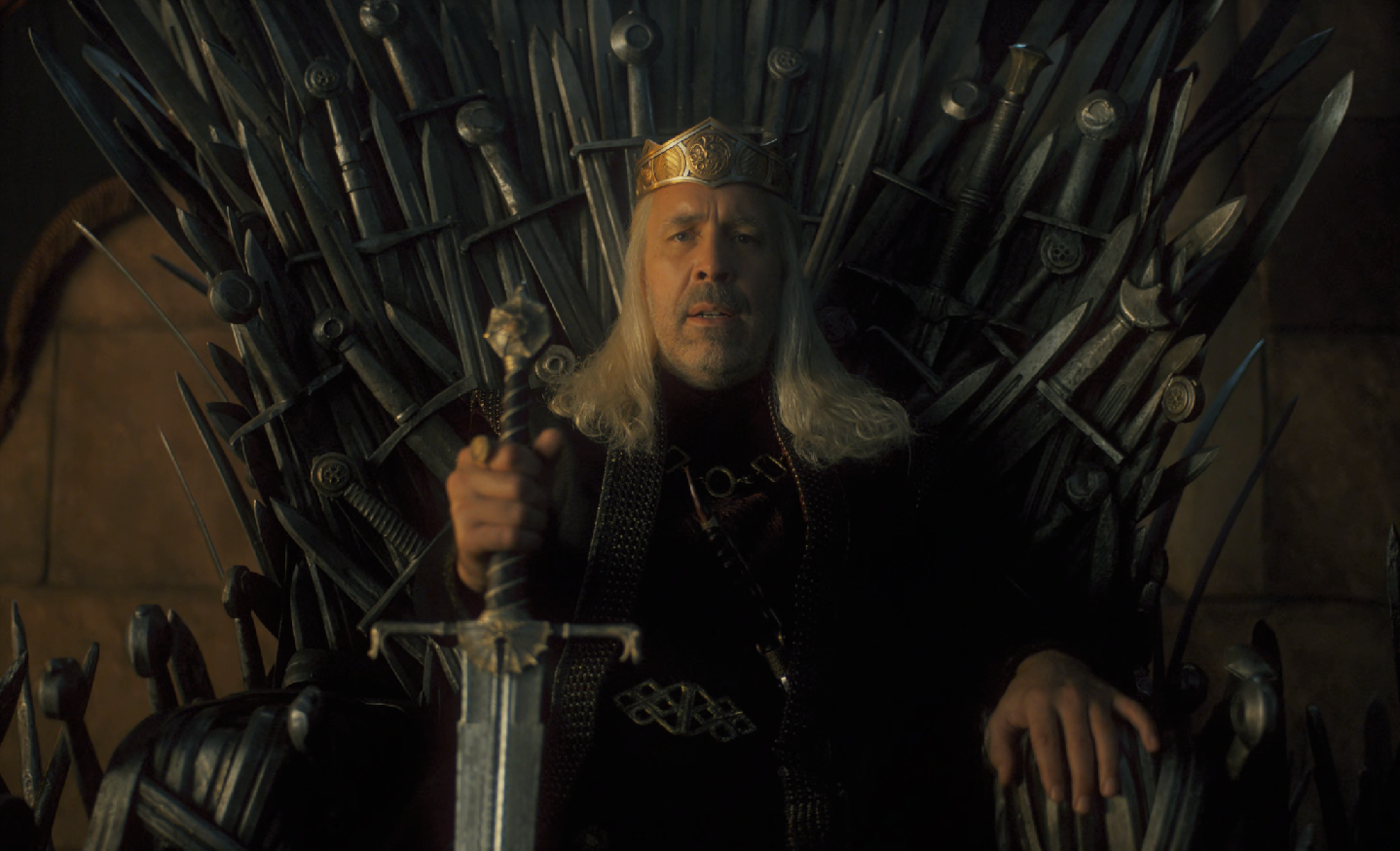 Viserys: You will address me as Your Grace, or else I’ll order the Kingsguard to rip out your tongue.
Daemon: I’m your brother and a prince! Aren’t these guys supposed to protect me too?
Viserys: Don’t wag your law degree at me! I am the king!

Otto would certainly agree that the members of the Kingsguard should know which end of a sword is the stabby part, of course, but ultimately he is suggesting to Rhaenyra that she prioritize political advantage. He wants to bring into the Kingsguard a knight who is connected to a powerful House, the fundamental unit of power in the Seven Kingdoms. It’s probably true that in Otto’s mind, he thinks he’s doing the right thing by his king in making the best political choice.

Otto is more of a soft power guy than a hard power guy. He relies on political maneuvering and diplomacy, rather than direct conflict. And to his credit, he’s good at it.

Lord Corlys: Your Grace, let me be very direct. I want you to marry my extremely youthful daughter and make her your queen, because this would boost your perceived standing and more importantly, make it harder for you to say no to me when I want to expend resources towards military action in the Stepstones.
Viserys: This is an interesting proposal – literally – but I am afraid that I have already committed myself matrimonially to Lady Alicent Hightower.
Otto: What a complete surprise. Huzzah!

Otto might be able to argue his case from a big picture view – Viserys does appear weak, therefore employing tools to give the king (or his advocates) political leverage among the lords of Westeros isn’t necessarily a bad course of action. But from an even bigger big-picture, making decisions about the Kingsguard that don’t support their fundamental purpose erodes the institution in the long run.

The Kingsguard were deliberately modeled after the institution of the Night’s Watch, an organization that had existed for (allegedly) thousands of years. This sworn monastic order of sentries, looking northwards, were known to swear oaths that minimized their old familial ties and forbade any ambitions for lands or heirs. They served the Watch until their death, defending the realm. Likewise, Visenya’s vision for the Kingsguard was a sworn monastic order of wardens, guarding the king, who would swear oaths that set aside their old familial ties and any ambition for lands or heirs. They’d serve the defense of the king until their death.

Both mindsets built into the foundation of these respective organizations implies a removal of politics, or at least any politics that aren’t specifically in support of their core missions. (One could argue that guarding the king is implicitly political, this is the exception to their otherwise apolitical nature.)

But in the very first scene of Game of Thrones (and the prologue chapter of A Game of Thrones) the viewers saw the disastrous consequences of the Night’s Watch trying to appease short-sighted political concerns. 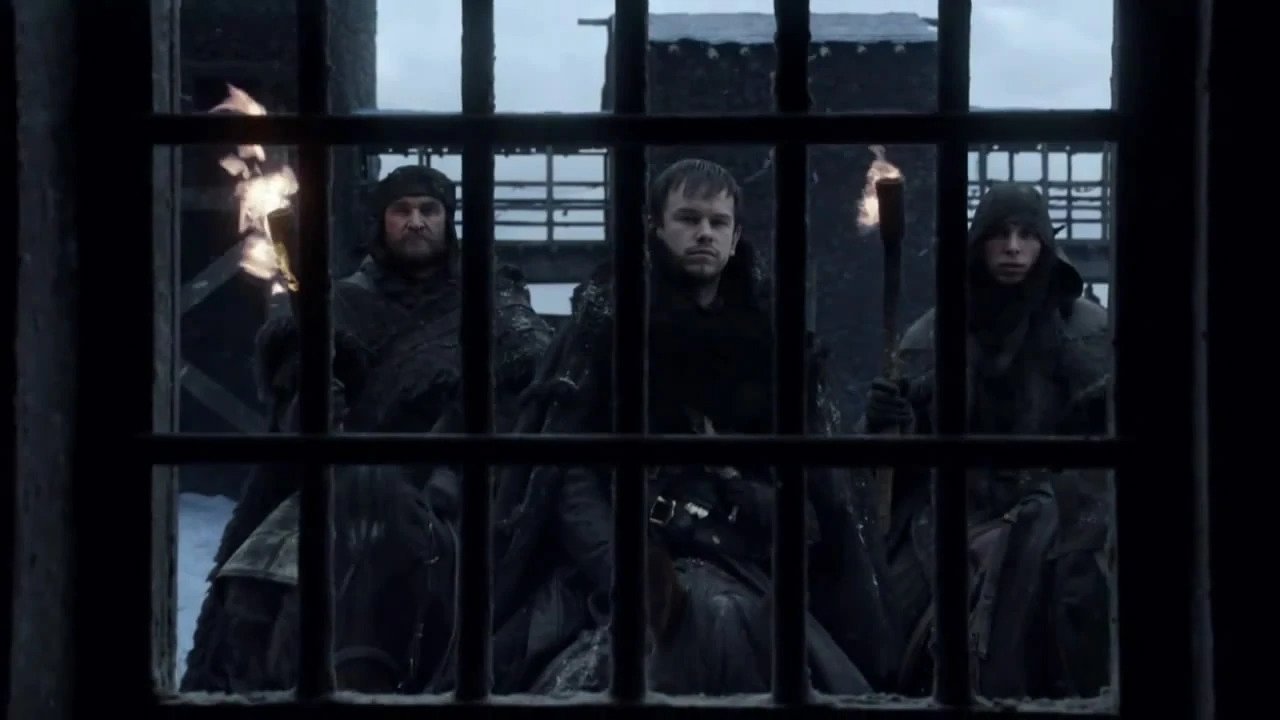 A new but noble-born recruit to the Night’s Watch, Waymar Royce, had been given command of two more-experienced Rangers, and had been sent out to interdict a group of raiding wildlings who’d navigated over the Wall, had pillaged, and had returned Beyond the Wall. Waymar ignored the instincts and experiences of the veterans who had been put under his command, leading to his death, the death of one of his men, and the eventual death of his remaining subordinate as a convicted deserter.

Waymar had been given command because he’d insisted on it, and contrary to the reputed meritocratic traditions of the Night’s Watch, the Lord Commander had granted his request. Jeor Mormont believed that if Royce’s favor could be curried, he would be able to use his familial connections with his father, the powerful Lord Bronze Yohn Royce of the Vale. The Watch was in need of men and resources, and Mormont wanted to capitalize on the lordling he had on staff to acquire help from the realm.

For that gamble to have paid off, Waymar Royce would have needed to get his ranging party back safely to the Wall, an outcome that the White Walkers were pleased to prevent. The destruction of the Royce ranging party then directly led to the deployment of a ranging party looking for the ranging party, led by First Ranger Benjen Stark. The disappearance of the Stark-led ranging party then led to the massive ranging commanded by Jeor Mormont, which led to massive losses by the Night’s Watch at the Fist of the First Men.

Waymar Royce: If it’s all the same to you, I’d like to be in charge of this ranging mission.
Jeor Mormont: *shrugs* Sure. What’s the worse that can happen?
Mormont’s Raven: HOLY COW DON’T DO THIS!
Waymar Royce: Errr…
Mormont: Ignore him, that bird is always yelling nonsense.
Mormont’s Raven: WHO HAS A BETTER STORY THAN BRAN THE BROKEN?
Mormont: See?

The Night’s Watch, according to Maester Aemon’s recollection, had boasted a strength of 10,000 black brothers along the many castles of the Wall, during the time of Aegon’s conquest. The show has clearly shown the decline of the Watch to a fraction of its strength by the time of Game of Thrones. But the Kingsguard did not fair much better.

The numbers of Kingsguard was fairly stable – replacements were found as Kingsguard were killed, or in the rare case of Barristan Selmy, fired. But the quality of the white cloaked brothers seemed much less impressive throughout the Baratheon administration –

Stannis: I suspect that you’re including Joffrey and Tommen in that description, and I protest.

– with one king killed in a ‘hunting accident’, one poisoned, and one left to commit suicide. All were killed not by outside forces, but people close to them via marriage (except for Tommen, who was killed by someone very close to him, himself.)

This speaks poorly of the duty to keep the king alive and well. 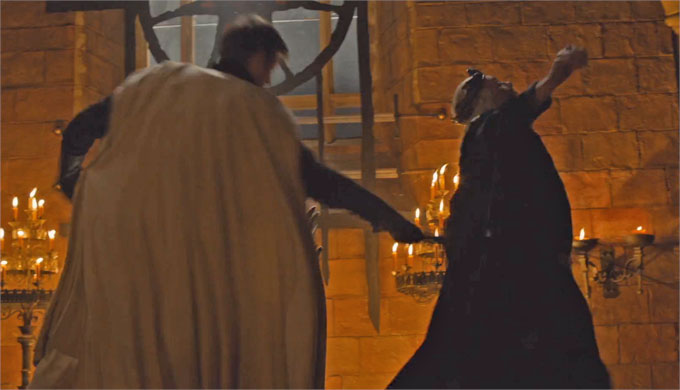 Perhaps the most egregious Kingsguard fail was in the case of Ser Jaime Lannister, killing (for extremely good reasons) King Aerys. Aerys specifically named Jaime to the Kingsguard, not because of his martial prowess (although Jaime being an excellent fighter provided good cover for the king’s action) but because politically, Aerys was effectively stealing away Lord Tywin’s heir-apparent and turning the young man into a hostage without any of the negative public relation ripples that making Jaime a prisoner of the crown would otherwise have caused.

In the end, Aerys having a deadly knight nearby who had no personal investment in the king’s health might have been a bad move for the Mad King.

Otto Hightower: I still think it was a good move.
Criston Cole: Even I have to admit that that Jaime Lannister kid is a good-looking lad. I’m generally of the opinion that all handsome Kingsguard are above reproach.

In general, it should be recognized that being a Kingsguard can be complicated, beyond just committing to take an arrow for the king. Serving the erratic Aerys was probably no picnic, and with the corruption in the court during King Robert’s and Joffrey’s reigns, perhaps it’s not too unexpected that the Kingsguard Ser Mandon Moore was employed in a failed assassination attempt on King Joffrey’s uncle Tyrion. That’s typically a task outside the normal duties of the Kingsguard.

Tyrion: Only the king (or the queen) can command a Kingsguard, so logically it could only have been Joffrey or Cersei who made that order.
Varys: I am so disappointed that you have learned NOTHING from my “power resides where men believes it resides.”
Tyrion: Are you still talking? I wasn’t paying attention.
Varys: Noted. 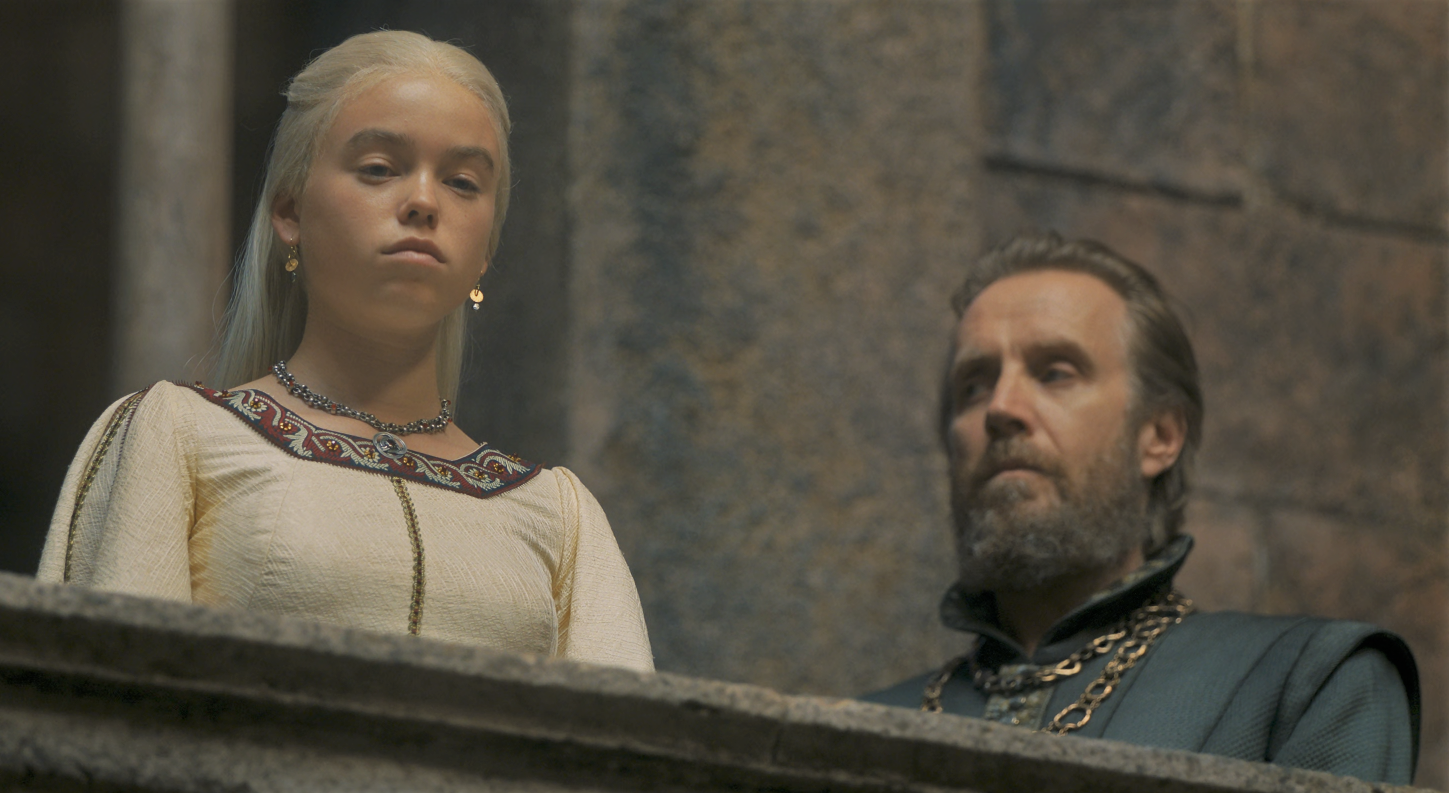 Rhaenyra: I don’t foresee any consequences of my choice. I’m just glad that I showed grumpy Otto that he can’t push me around.
Otto: I’m standing right here, Princess.
Rhaenyra: And so you are.