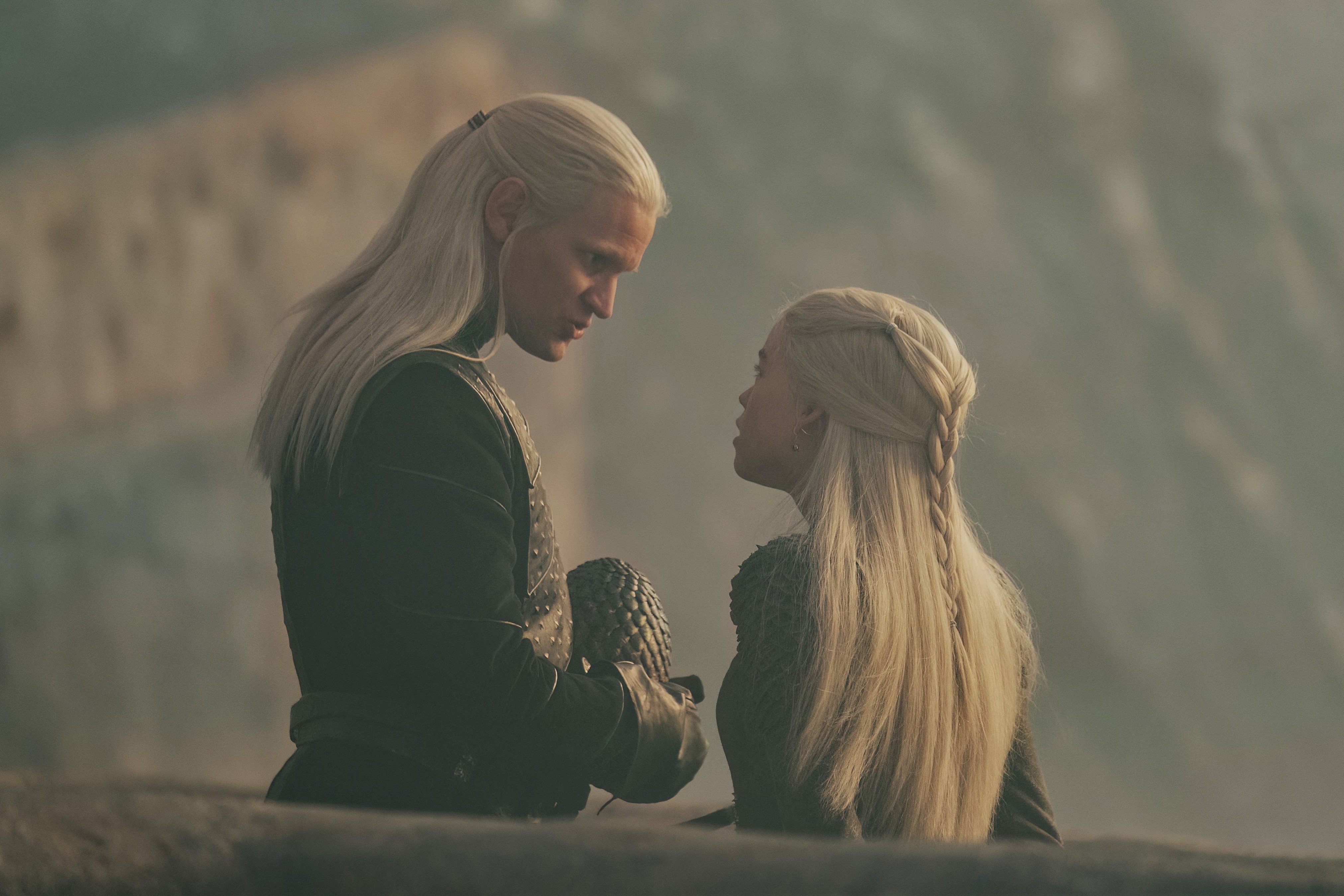 Earlier today, Greg Yaitanes, who directed episode two of House of the Dragon, “The Rogue Prince,” took to Instagram to offer fans some behind the scenes info on that confrontation between Daemon, Otto and Rhaenyra at Dragonstone. He also, perhaps unintentionally, gave us a quick look at a scene from later in the season featuring adult Aemond Targaryen

In his post, Yaitanes explained that the location used for Dragonstone on Game of Thrones, Gaztelugatxe, “is difficult to access, not wide enough to stage the scene as scripted or possible to get the cameras anywhere since the bridge drops 60 feet to the ocean on either side.”

So instead, the confrontation between Daemon Targaryen and Otto Hightower was filmed on The Volume, “a stage inside of a stage built with thousands of 12K LED screens that create a virtual and near photo real environment for shooting” run on the Unreal Engine by Epic Games.

Yaitanes worked with storyboard artist Adam Prescott and cinematographer, Pepe Avila Del Pino to storyboard the scene and work out VFX shots, which were then created by the VFX team and Pixomondo. They also collaborated with The Third Floor on previsualization of the dragons.

Additionally, the art department designed and built a portion of the bridge for the actors to stand on. After rehearsals, more storyboarding and some v-cam work (“an iPad that acts as a camera and creates a virtual environment around the actors”) the scene was filmed over the course of two days.

“I love process and it took a mountain of team talent to make this sequence happen. So many moving parts that came together beautifully,” Yaitanes wrote. “[The Volume] an exciting tool that filmmakers of the next gen are going be able to expand on. A huge thank you to fan account @houseofthedragons for the side by sides & fun collab.”

Yaitanes also posted concept art, a sample of the script and storyboard panels alongside frames from the completed scene. 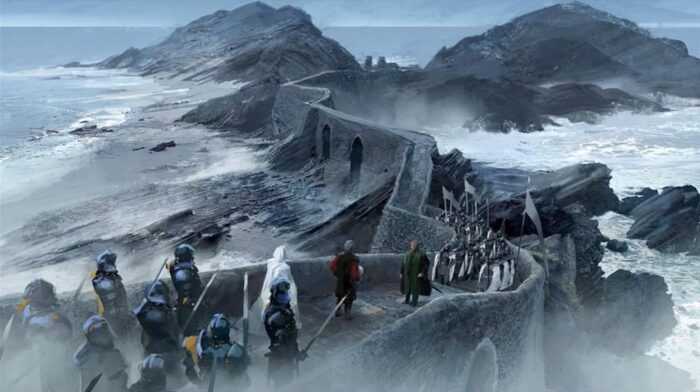 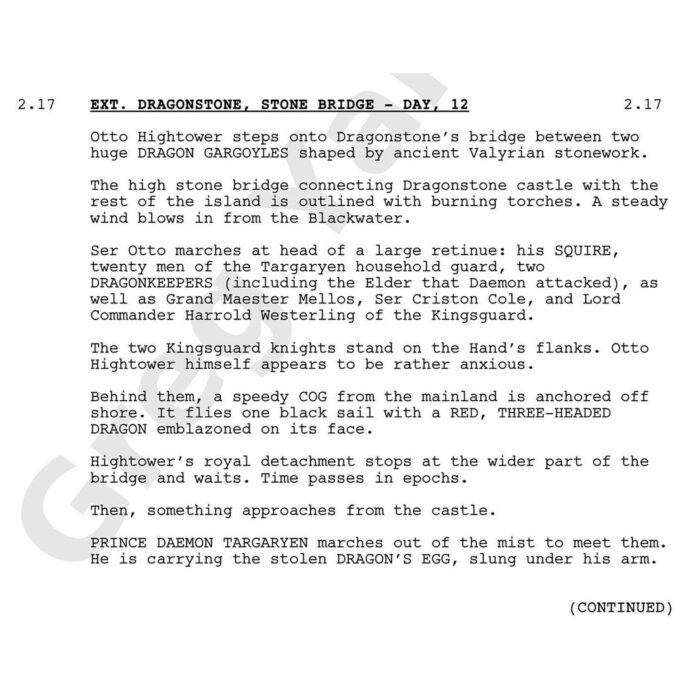 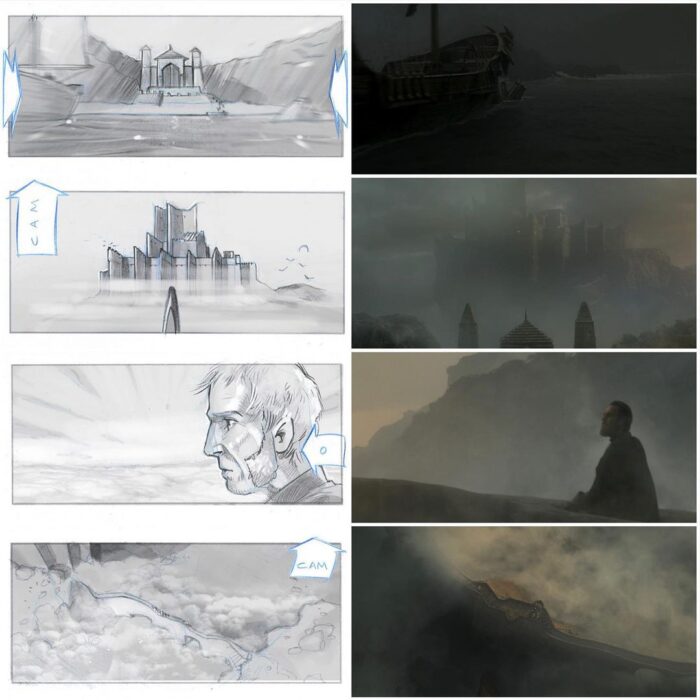 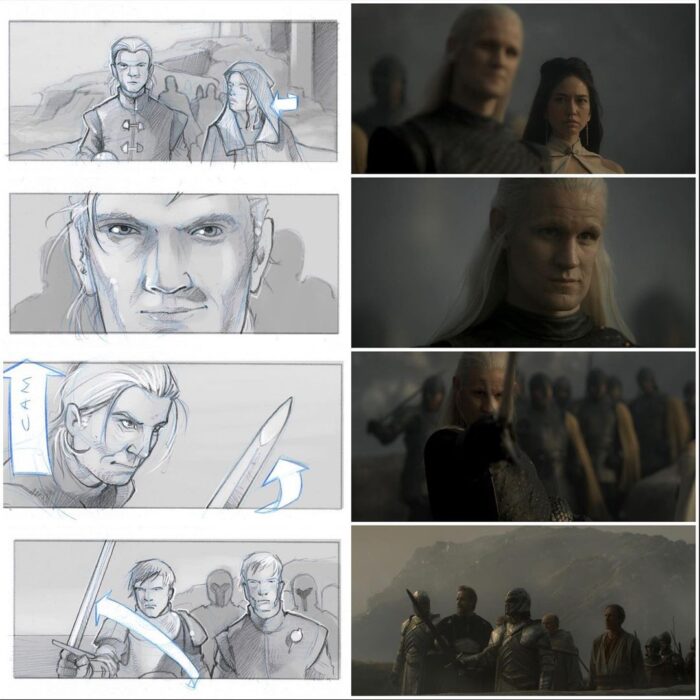 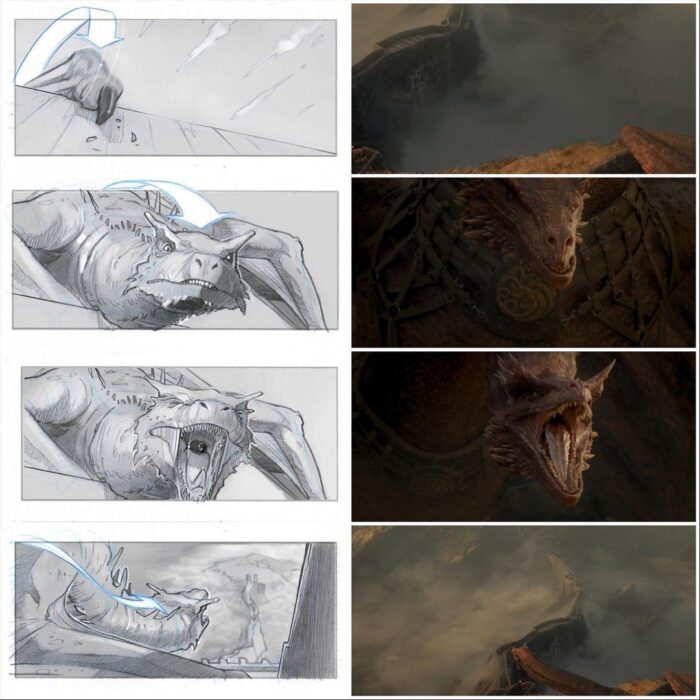 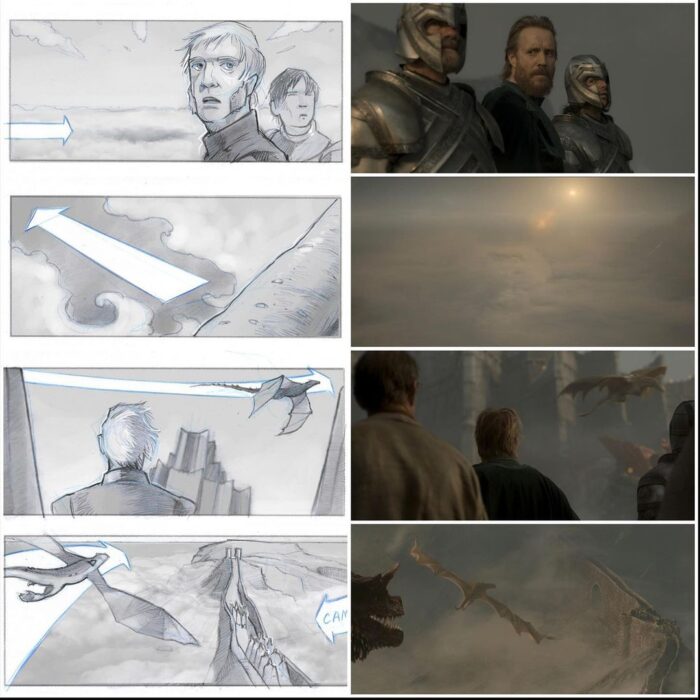 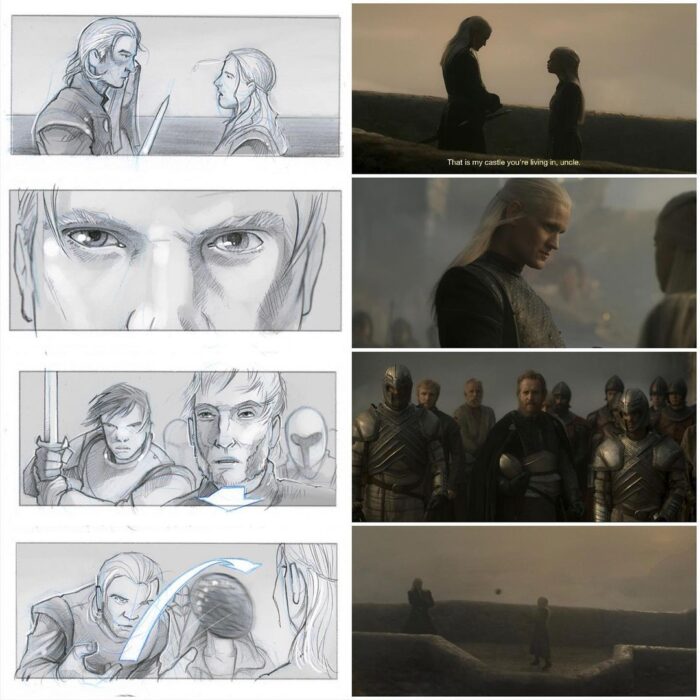 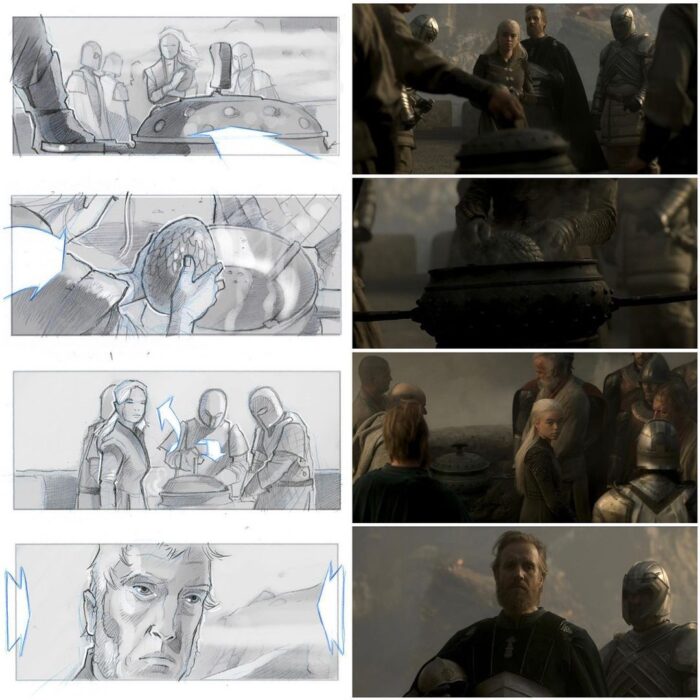 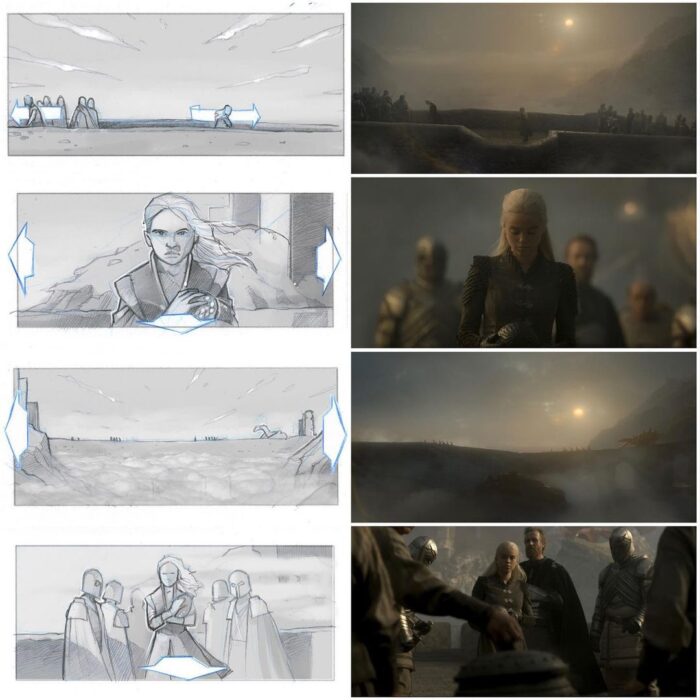 Lastly, Yaitanes posted a photo of The Volume stage, but if you look closely at the monitors, you can see that it’s not the standoff on Dragonstone that’s being filmed, but a scene featuring grown up Aemond Targaryen.

*Speculation and potential mild spoilers below* 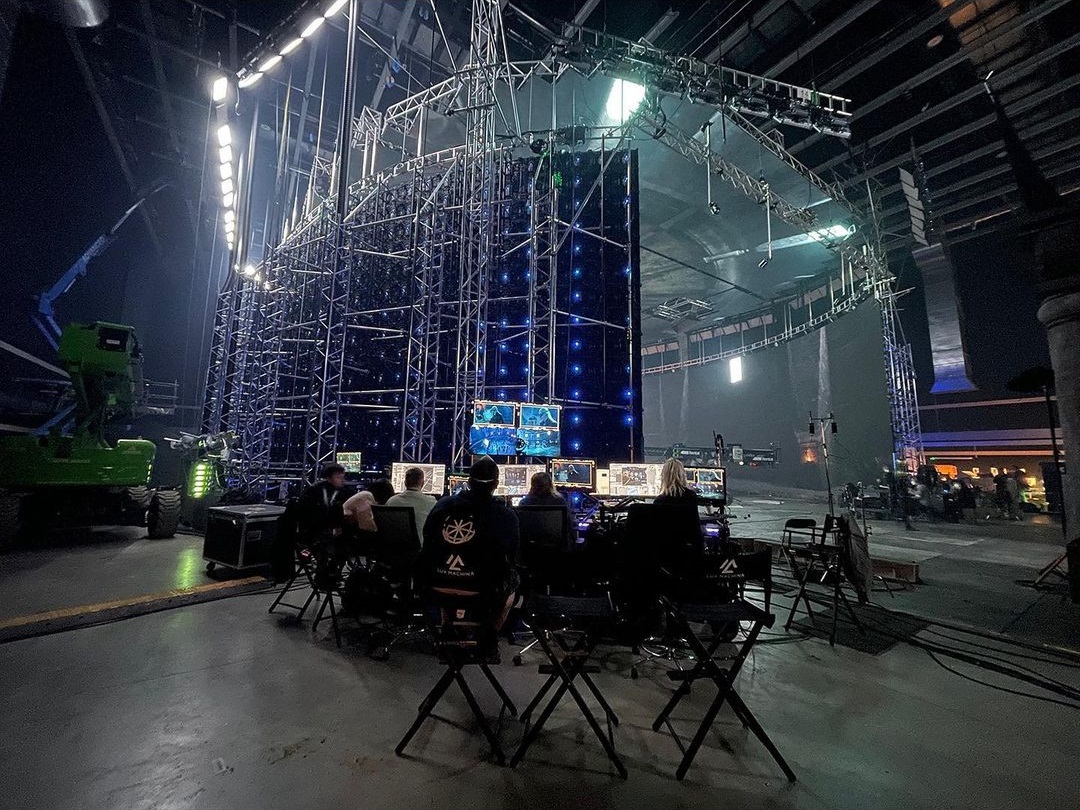 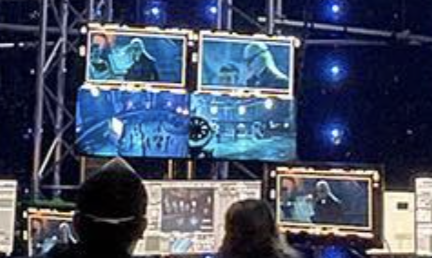 Of course, we can’t tell exactly what’s happening in this scene (gods have mercy on Yaitanes if we could). There appears to be a woman standing next to Aemond with her arms crossed. I’d be inclined to identify her as Maris Baratheon, except that the room doesn’t seem to bear any resemblance to Storm’s End from what we know of the castle. It appears to have multiple circular windows directing sunlight towards a single object; it looks more like a temple.

Still, Yaitanes hasn’t only directed “The Rogue Prince” but next week’s episode and the season finale, which would be the ideal place for that Storm’s End scene. 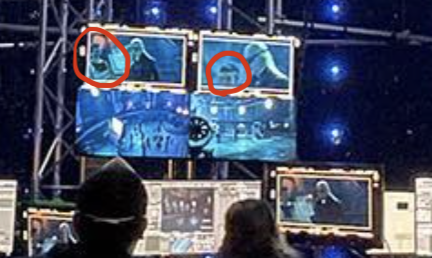 Any ideas what else this could be? Tell us below.