Review: Brewery Ommegang's King in the North defeats winter | Watchers on the Wall | A Game of Thrones Community for Breaking News, Casting, and Commentary 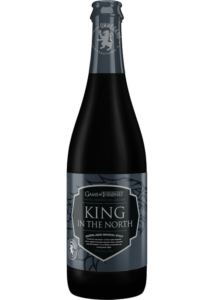 I’ll be honest, as a beer drinker I don’t like stouts. So I was apprehensive before trying King in the North Imperial Stout, from Brewery Ommegang’s new Royal Reserve Collection- even with my love of the Starks and King Jon Snow!  I prefer the lighter, sweeter offerings from Ommegang such as the Iron Throne Blonde Ale or the Winter is Here Double White Ale. However, this new imperial stout won me over. Brewery Ommegang has chosen well with their fourth installment in their Royal Reserve Collection, giving us the King in the North Barrel-aged Imperial Stout just as the winds of winter have begun blowing. 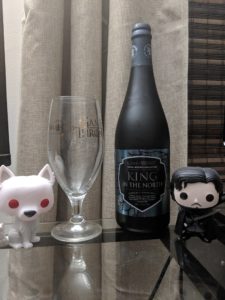 Named King in the North in honor of our lord commander and king, Jon Snow comes in a similar blackened out 750 ml bottle with a distinctive blue label and the Stark Direwolf across the label. It’s the first blue label on their collection since last winter’s offering, Winter is Here. Hmm curious- the Starks and White Walker beers getting the same color scheme. I’m sure it’s a coincidence, nothing to see here.

The beer itself is an imperial stout barrel-aged in bourbon barrels, and you can tell from the first sip. It has a rich, complicated taste typical of stouts and bourbons which encourages you to sip rather than guzzle. The smell as well communicates this; it has the bite of a direwolf, clocking in an ABV of 11%. While this is on the low side for imperial stouts, that is the highest among the Royal Reserve Collection. Just the sort of thing to keep you warm in a freezing blizzard in the walls of Winterfell.

Ommegang describes it as:

King in the North pours jet black with a thick tan head. Aromas of roasted malt, coffee, and chocolate blend with those of oak, bourbon, and vanilla. The flavor is rich and full with notes of chocolate, vanilla, coffee, and roasted malt up front followed by smooth bourbon and a hint of oak.

And I would agree with their description. King in the North has a foam head and tan coloring typical of stouts. The chocolate and coffee come through the strongest of the flavors listed. It’s very smooth to drink, the bitterness is not overwhelming, and the flavors and aromas make it something I’d be very happy to have regularly. 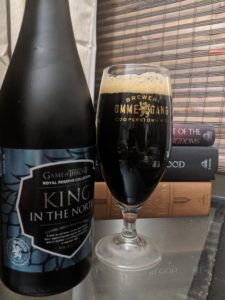 The aftertaste especially is very pleasant. Long after you’ve poured back another swallow and the bitterness fades, the coffee, bourbon, and chocolate flavors keep rolling around your mouth. Much like the gruff charms of the Northerners like Big Bucket Wull, the beer grew on me and maybe made me willing to try more stouts in the future. Although, word of warning to my fellow ale enthusiasts, it is fairly bitter, heavy and dark.

King in the North is available now for purchase in those beautiful 750ml bottles and on draft, and we would love to hear what you think of it here! And thank you to Brewery Ommegang and HBO for sending us the beer.

Released alongside the King in the North is the Royal Reserve gift pack with 12-ounce versions of each beer and an Ommegang Game of Thrones glass. Get them now from your favorite shops- Ommegang has a handy beer finder on their website if you can’t locate them.