Liam Cunningham confirms a new character in season 6 and the cast talk white walkers, crazy theories and more | Watchers on the Wall | A Game of Thrones Community for Breaking News, Casting, and Commentary 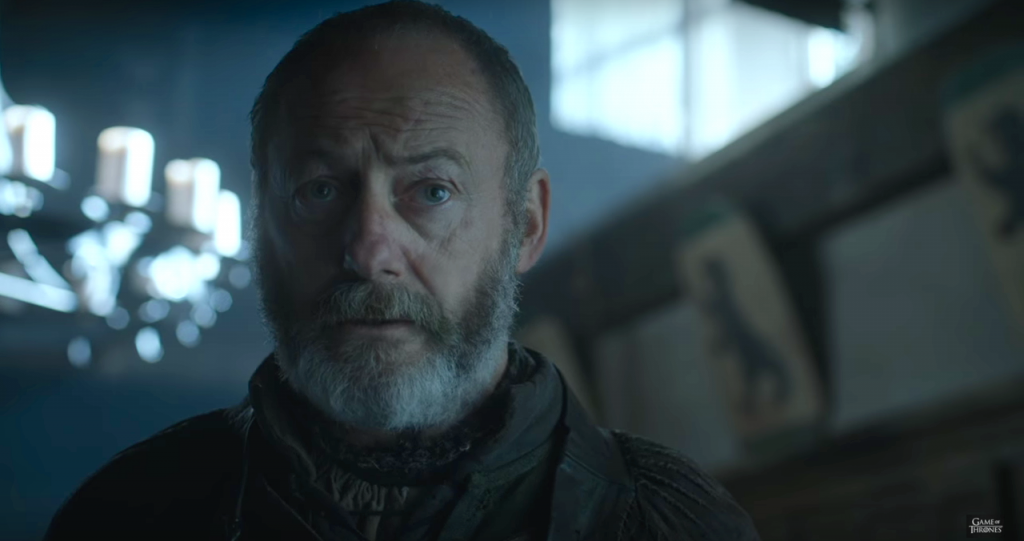 *** Spoilers and speculation below ***

In an interview with IGN, Liam Cunningham not only confirmed speculation that Davos is, indeed, speaking to a Mormont when he says, “The real war is between the living and make no mistake, the dead are coming,” in the trailer, he specified which Mormont it is.

Cunningham also discussed the ludicrousness of the Westerosi’s reluctance to address the white walkers and hinted that Davos and Melisandre might unite through their shared belief in the imminent threat.

The Night’s King is coming. You ain’t gonna kill him with a bow and arrow. We need to do something, rapidly, but they’ve all got their heads up their asses with their own little squabbles. Don’t forget Melisandre’s seen it in the flames. She’s talking about all these petty squabbles that are going on with the Lannisters and the Boltons, all getting their little piece of turf in the Seven Kingdoms. They refuse to recognize that there’s 100,000 of the undead about to come. She’s seen it. [Davos] believes the things that she’s seen, even though he doesn’t like her, but she has her powers.

Maisie Williams expressed a similar view about the significance of the white walker invasion. “…[E]veryone’s little personal issues are absolutely meaningless and Arya’s own little selfish storyline means nothing in the overall story of Game of Thrones, and it’s true, we have to be turning our weapons north,” she said. “But you think anyone’s going to before it’s too late?”

Sophie Turner stressed the scale of the inevitable conflict: “This is a big thing … This is one of those battles that is kind of unstoppable. It’s more ominous than anything. It’s looming, and you really get a sense that the end is nigh.”

Michael McElhatton and Iwan Rheon both think that their characters are aware of the white walkers .. they’re just too busy at the moment to care, though McElhatton teased the possibility that the Boltons might be have “some connection with white walkers“.

“It must be [a concern],” Rheon said. “But it’s not the immediate threat because it seems further away to them than the other people – practically everyone in Westeros – who wants to get rid of them. They’ve got a lot more battles to fight before the White Walkers come.”

Tom Wlaschiha suspects that the Faceless Men know all about what’s going on beyond the Wall. “I’m pretty sure Jaqen knows about the White Walkers and the stuff that’s going on in Westeros.”

According to Isaac Hempstead-Wright, Bran may be “the key” to defeating the White Walkers, but in order to do so, he’s really going to have to step it up.

“There’s not much time. Bran has really got to get his act together, and he’s still got many teenage, hubristic tendencies. He’s still making some silly decisions with his powers. He’s got to learn quickly, and he’s got to shoulder a tremendous amount of responsibility with these powers which are going to be crucial, I feel like. For Bran, ‘the dead are coming’ is a real ‘you need to step up to the plate.’”

Isaac Hempstead-Wright talked about the Luke Skywalker-esque change (“forget Summer, he’s got a droid now) that Bran has undergone in his season long absence and what it was like to film his scene with the Night King.

Emilia Clarke spoke vaguely about the “dodgy” situation Daenerys finds herself in next season and Joe Naufahu described his character, Khal Maro.