Kristian Nairn visits Boston ahead of NYC premiere, cast & crew dine out with GRRM, and how the 'Northern' Throne was found | Watchers on the Wall | A Game of Thrones Community for Breaking News, Casting, and Commentary 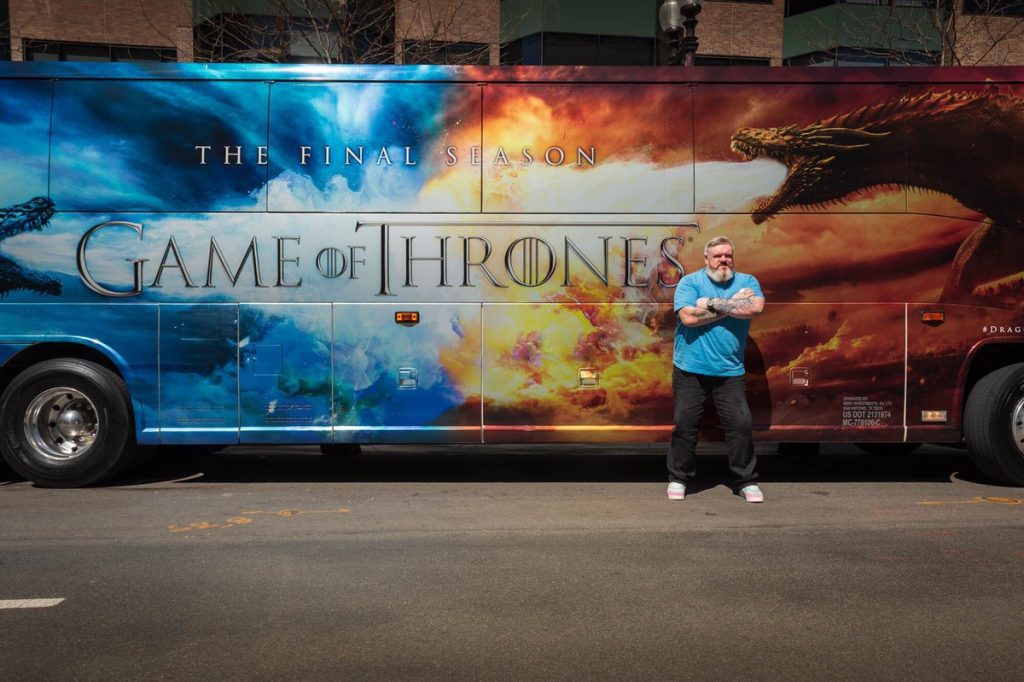 Our beloved Hodor (Kristian Nairn) poses in front of the “Dragon Wagon” in Boston.

With only hours to go until the world premiere of the eighth and final season of Game of Thrones at Radio City Music Hall in New York, news continues to flood our Twitter feeds and news alerts — not that we’re complaining (and neither are the fans getting photos with some of their favorite actors)!

Yesterday night the cast met up for dinner in NYC. You can see Natalie Dormer, Peter Dinklage and George Martin there as I've said before. pic.twitter.com/XfaVDvVzh0

It appears as though GRRM was joined by Natalie Dormer (Margaery Tyrell), Peter Dinklage (Tyrion Lannister), Sibel Kekilli (Shae), Carice van Houten (Melisandre) and Maisie Williams (Arya Stark) — among many others, most likely. The photos of Sophie Turner (Sansa Stark), Kit Harington (Jon Snow) and Sean Bean (Ned Stark) appear to be from yesterday afternoon as they arrived in NYC and not necessarily from dinner, although we can reasonably assume at least Sophie and Kit were there, and hopefully Sean as well (who doesn’t want to see a Stark family reunion?).

In another major city yesterday, Kristian Nairn (Hodor) made an appearance at Boston’s AT&T flagship store as part of a giveaway for winning tickets to the premiere and a ride on the “Dragon Wagon,” a luxury bus that will take winners to the premiere tonight in NYC. Nairn met fans, posed with the Dragon Wagon and took a seat on the Iron Throne:

Today, @GameOfThrones fans visited the AT&T Boston Flagship Store for a chance to win a ride aboard the #DragonWagon to the #GOTPremiereNYC. @KristianNairn made a special appearance. (📸: @mcasey101) : https://t.co/Xz3myJUXbc pic.twitter.com/Aj2gnrr3rc

Finally, an interesting story about how the second Iron Throne — the Throne of the North — was found in the recently-completed Quest for the Throne scavenger hunt. It involves some luck, the Northern Lights, and an eight-hour drive.

KQED posted an interview with the “Queen of the North” who found the Throne, Josefine Wallenå, who journeyed far into the arctic near her home in Sweden when the second Throne was posted. After looking at one of HBO’s tweeted clues closely and its caption, she realized one of the thrones might be nearby.

“When I saw the snow , I was like, ‘Wait a minute. This may actually be Sweden.’ And when I read the first clue, I was sure right away that it was in Sweden,” Wallenå said in an interview with NPR’s Weekend Edition Sunday. “The clue for it said a crown for each of the three stags.”

Three crowns are part of the Swedish national emblem and the Sweden men’s national ice hockey team is nicknamed “Tre Kronor,” meaning three crowns in the Swedish language, she said. She also noticed the Northern Lights in the hour-long video posted with the clues, and recognized a valley known as the Lapponian Gate. An hour after the clue was posted, Wallenå and her boyfriend jumped in the car and drove eight hours to the location, where they hiked up a mountain and finally glimpsed the Iron Throne, some 150 miles inside the Arctic Circle.