Jon & Arya reunite and much more in 2 new Game of Thrones Season 8 TV spots! | Watchers on the Wall | A Game of Thrones Community for Breaking News, Casting, and Commentary 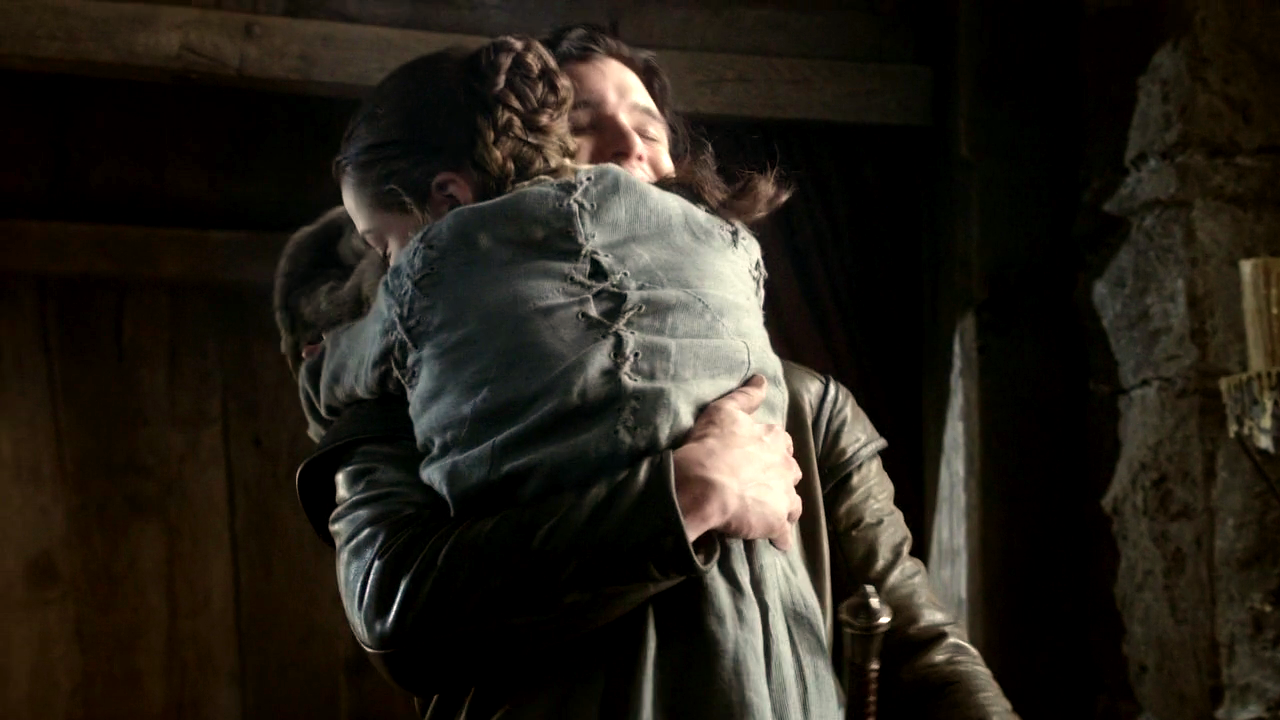 This reunion has been coming for 67 episodes!

It appears that season eight trailer we analyzed to death may be the only one we ever get, but don’t despair: here are some TV spots instead! Very much like the trailer, these promos focus on the first half of the season, but with some new footage, including what looks like Jon and Arya reuniting; Tyrion and Jaime echoing striking lines said to them in the past; more from the Battle of Winterfell; and maybe even a hint of Jon flying Rhaegal.

In the first TV spot, the familiar trailer shot of Jon standing by Winterfell’s heart tree is followed by a new reverse shot in which we see Arya is there for Jon, in what’s likely part of the reunion we’ve been waiting for ever since they said goodbye in “The Kingsroad.” Sam says “Think back to where we started,” and Jon seemingly replies “Now it’s just us.”

In another continuation to a previous trailer shot, we see Daenerys is joined by Jorah; Rhaegal approaches Winterfell’s northwestern side and the enormous encampment around it (the VFX look beautiful!); Varys, Tyrion, and Davos look up at a dragon, though that’s not something that would shock these three… unless Jon Snow is riding Rhaegal, of course!; Jon lights the candles of a statue in Winterfell’s crypts, as we hear him say “We need to end this war”; in another trailer shot, this time we can hear Jaime scream “Run!” or perhaps “Draw!” (for what it’s worth, the Russian trailer dubbed it “Bronn!”); we get a panoramic of the battle inside Winterfell’s walls; the Unsullied point the spears to the enemy; and, finally, Jaime echoes the words with which Brienne shocked him during last season’s finale, saying “This goes beyond loyalty. This is about survival.”

In terms of new footage, the second promo shows Tyrion taking the stage in Winterfell’s Great Hall, with Sansa and Dany at the great table behind him, trying to convince the Lords of the North with a similar speech to the one Davos gave Dany and Tyrion last season, except Tyrion gets even more to the point: “We must fight together now. Or die.”

Next, Jon turns away from Dany, whose back is to us as she looks into the hearth; Beric, fiery sword in hand, shouts at a paralyzed Sandor; Daenerys reacts to something in Winterfell’s courtyard; the Unsullied close ranks, forming a phalanx with their dragonglass-coated shields; Jon wildly swings at the camera and Cersei violently turns to it (poor cameraman); in the middle of a blizzard, the Unsullied form a shield wall, with spears at the ready; and, in a orange-tinged Winterfell, Arya fights with her stick.

So, do you believe we got a reaction to Jon riding Rhaegal? How will Arya’s reunion with Jon continue? Will the Hound overcome his fear of fire during the Battle of Winterfell? Is Jaime really shouting “Bronn”? Who will get out of that battle alive… and who will not?