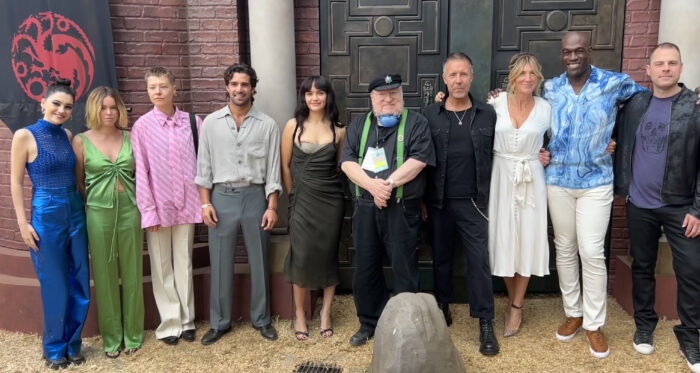 For the first time since 2019, San Diego Comic Con has come alive with the music of dragons. After being cancelled two years in a row due to Covid, SDCC is back from July 21 – July 24 in a joyous return to some semblance of normality.

House of the Dragon has enjoyed a strong presence at the convention so far, with a Q&A panel held on Saturday and a new interactive exhibit called House of the Dragon: The Dragon’s Den in which fans can, among other things, hatch their own dragon eggs.

Matt Smith and the House of the Dragon Cast arriving for their #HotdSDCC panel.#MattSmith #DaemonTargaryen #HouseoftheDragon #Hotd #SDCC2022 #SDCC pic.twitter.com/uIwReWGcZe

Unfortunately, the panel was not filmed in its entirety but thanks to the hive mind of Twitter, we can still enjoy the highlights.

On the topic of Paddy Considine …

“The thing Paddy brought to Viserys is this real inner fire… he fiercely tries to bring everyone together.” – Ryan Condal #HouseoftheDragon#HOTDSDCC

Considine also really wanted to take one particular prop home with him.

The king wants his knife: Paddy Considine on his favorite prop in #TheHouseOfTheDragon #SDCC pic.twitter.com/uKkxsfxdZW

Matt Smith and Eve Best agreed that Meleys is the best dragon, which sort of makes sense, since Meleys is ridden by Best’s character … get it?

Matt Smith and the House of the Dragon cast on who is the best Dragon.#MattSmith#DaemonTargaryen#HouseoftheDragon#Hotd#HotdSDCC#SDCC#SDCC2022pic.twitter.com/lMW7BHUTuh

Eve Best expressed her excitement for the show and discussed her character, Rhaenys’ interiority.

“I didn’t know anything about Game of Thrones but knew it was an amazing deal. When I met Ryan and Miguel, they were really cool and what they had written was really cool…and I thought gosh I want to be a part of this and I’m really happy that I am.” – Eve Best #HOTDSDCC

“She should have been the queen and it’s kinda annoying she isn’t and it’s annoying that people keep reminding her that she isn’t.” – Eve Best on Rhaenys being passed over for queen #HOTDSDCC

Steve Toussaint talks about being Corlys Velaryon on #HouseOfTheDragonpic.twitter.com/5H3uGkqYSx

Ryan Condal acknowledged the creative challenges that come with making a television drama based on, essentially, a history book.

“It’s a really interesting challenge because it’s a history book…the trick is painting in the lines…moving through this complex timeline in a simple way.” – Ryan Condal on the challenges of adapting Fire & Blood #HOTDSDCC

Condal also promised us lots of dragons and lots of Driftmark.

“There are 17 dragons at the heart of this.” – Ryan Condal #HouseoftheDragon#HOTDSDCC

“Driftmark of House Velaryon is a new world we explore quite a bit.” – Ryan Condal #HOTDSDCC

The #HouseOfTheDragon cast reveals what it was really like to ride dragons on set #comiccon2022pic.twitter.com/sEnRZiwoMO

Emma D’Arcy talked about what drives their character, Rhaenyra.

“I think Rhaenyra is fueled by that old Targaryen stuff and I think the journey she goes on in the series is when to let that fire burn and when to dampen it.” – Emma D’Arcy #HOTDSDCC

Emily Carey set the record straight: Alicent is not the villain.

Emily Carey says Alicent is not the villain in #TheHouseOfTheDragon #SDCC 2022 pic.twitter.com/Ejdh4dQtje

Emma D’Arcy talked about their feels while watching episode 1

Matt Smith hinted at the complexities of Daemon and Viserys’ relationship.

“I hope me and Paddy found a lot of depth and richness in the work that we did… everything is about his brother, for Daemon.” – Matt Smith
#HouseOfTheDragon#HOTDSDCC

George R.R. Martin spoke about the tumultuous emotions of handing over “his children” for adaptation.

“I was nervous at the beginning because, you know, these books, these characters are like my kids and when you give your kid to people for adoption you wonder how they will be treated. Will you recognize them when they come back to you and all that but I‘ve been very, very fortunate, here, and I think Ryan has done a great job of adapting the books – so far,” he added, to knowing laughter from Ryan Condal and the audience. “And our cast here is amazing. I haven’t had a chance to meet them. Unfortunately, with Covid I didn’t get to visit the set and hang around as I did on a certain other show in the past. I’ve seen nine of the ten episodes and it’s pretty amazing. Pretty amazing. I’m really very happy.”

He also discussed how Covid and … a certain side project have kept him from being as involved on the House of the Dragon set as he was for Game of Thrones.

“For the last couple years since Covid hit I’ve hardly left my house. I’ve been, you know, trying to stay away from Covid and also, you may not know, but there’s this book that I’m writing. It’s a little late.” Pause for audience laughter and applause. “I don’t see [myself] visiting the set or doing anything until I finish and deliver that book and then if the show’s still going, who knows, maybe I’ll show up. I did do a cameo in the original pilot of Game of Thrones but they reshot most of that pilot so I was left on the cutting room floor and I was supposed to be, at a certain point, I was supposed to be a severed head in that scene where Joffrey makes Sansa look at all the severed heads on the wall. I was going to be one of them but then they found out how expensive it was to make a severed head and they just bought a box of used severed heads, one of whom was George W. Bush, which got us in a lot of trouble when people noticed that and I don’t think he’s there any longer but if you get one of the old DVDs you can see that. Now, who knows maybe I can yet become a severed head at some point.”

In addition to the panel, SDCC attendees can participate in House of the Dragon: The Dragon’s Den, an immersive experience in which fans can walk through King’s Landing, sit the Iron Throne, select their own dragon egg and take part in a dragon hatching ceremony.

The #HOTDSDCC experience was so immersive and well executed. Gets you psyched for #HouseoftheDragon. The swag was a photo op and a pin but the experience is the real takeaway here. Loved it. #SDCC #SDCC2022 pic.twitter.com/sZ8Kc8v0hQ

Of course such an exhibit would be fundamentally incomplete if the cast of House of the Dragon didn’t participate.

One does not need Targaryen blood to enter the Dragon’s Den, but it helps. #HOTDSDCC pic.twitter.com/szNkcDFAjz

📸: “Should’ve been you Baby! The Queen that never was.”

Finally, also shown at the panel: an extended version of the latest trailer, which will be released later today!

House of the Dragon, SDCC