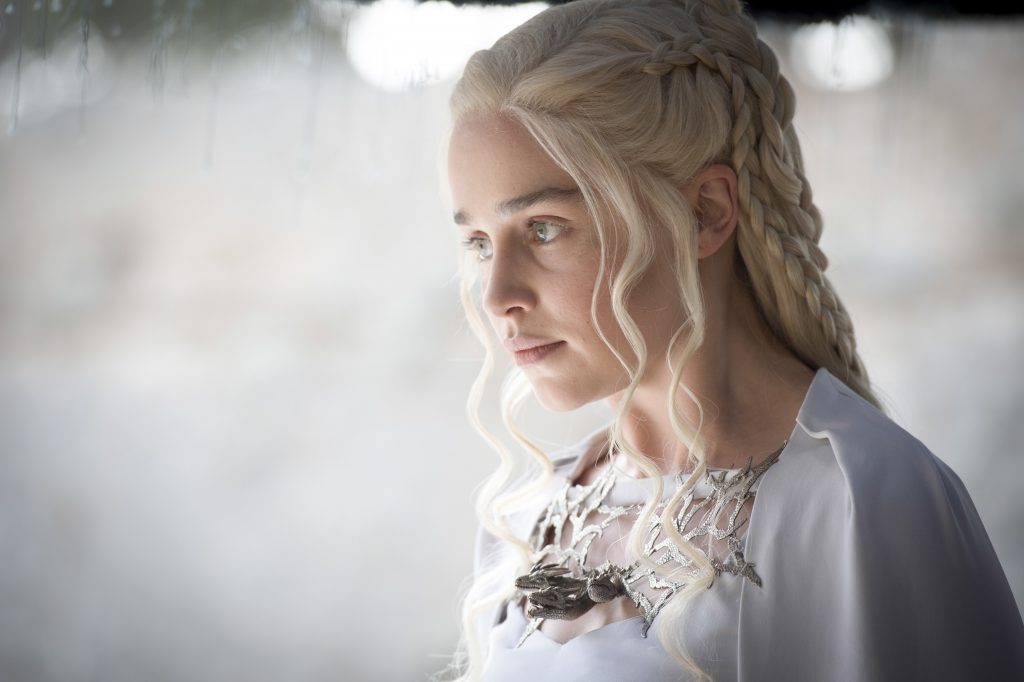 With only four trips down Memory Lane left, today we bring you Game of Thrones Season 5 Episode 7, “The Gift.” Airing on May 24th, 2015, the episode was written by David Benioff and D.B. Weiss and directed by Miguel Sapochnik. Most famous for uniting Daenerys Targaryen and Tyrion Lannister, the episode features several key moments in the series including Jon’s preparations for Hardhome, Stannis’ struggle with sacrifice, and Cersei’s imprisonment.

We begin at Castle Black where Ser Alliser advises Jon against his mission to save the wildlings. His patronizing demeanor ultimately foretells not only his later resistance opening the gate but the mutiny he has planned for the finale. Sam and Jon also share a goodbye as Sam gives him dragonglass he hopefully won’t need.

At Winterfell, Sansa begs Theon for help against Ramsay. Reek is horrified at her request in disobedience when Sansa uplifts him with a speech on who he really is: Theon Greyjoy. She pleads with him to put the infamous candle in the window for Brienne to see.

The scene that follows is an exceptional directing trick by Sapochnik. The uplifting music following Reek through Winterfell and up the stairs, leading us to believe he’s going to light the candle until…he arrives in Ramsay’s quarters. Dammit! To tease us further, we go to Brienne vigilantly watching the window and frowning as it remains dark. Further still, the transition to the next scene with Sam, Gilly, and Aemon begins with none other than a lit candle. Our desperation is more than in line with Sansa’s at this point.

Gilly urges Sam to get some rest as he’ll need to speak for Aemon in the morning. Sam resists as the maester deliriously speaks his final words:

Aemon: Egg…I dreamed that I was old.

The scene is a lovely reference to George R.R. Martin’s Dunk and Egg novellas (which could if anything be our next Game of Thrones TV series) and a touching final scene for Maester Aemon. Peter Vaughan brought wisdom and sincerity to The Wall and will sorely be missed now that his watch has ended.

Back at Winterfell, Sansa experiences the fallout of her failed escape plan. Sansa cuts down Ramsay’s hopes of being Warden of the North noting he was legitimized by a bastard and has no claim to anything once a true son is born. Littlefinger would’ve been proud at that one. Recently, Sophie Turner discussed Sansa’s emotional intelligence over physical violence in playing the game of thrones and here is the prime example of such. He retaliates by displaying his gruesome work of the old woman who tried to help Sansa escape. Iwan Rheon’s calm demeanor in reliving how Ramsay flayed her only makes his character more terrifying for Sansa than Joffrey’s outbursts and wild bloodlust. Also worth noting this scene is the snowfall and the threat it accompanies.

Outside Winterfell, Melisandre reiterates the need for a great sacrifice in order to ensure a great victory. She reminds Stannis of the power of king’s blood and what she’s seen in the flames as Stannis faces his ultimate decision. The scene conveys their entire relationship perfectly. He leans on her for counsel and even lusts for her while she stays true to her duty to the Lord of Light. With Melisandre struggling with her faith after the finale, it’ll be interesting to see what she reverts to when she’s lost so much.

It didn’t take long after Aemon’s death for the brothers to turn on Sam and Gilly (as Alliser warned). At Castle Black, The Slayer defends Gilly with a little help from Ghost and is rewarded for his chivalry after. It’s a tender scene between the two that adds heart to an otherwise dark episode.

In Meereen, we catch up with Jorah and Tyrion’s adventures as well as Dany’s reluctance for the fighting pits. Tyrion demonstrates his skills as a fighter for fear of being separated from Jorah as the two are sold off. Daario offers some suspicious council to Dany and urges she kill all the masters.

The face off between Lady Olenna and the High Sparrow is one of my favorites this episode. The dialogue is delivered with precision and excellence between Diana Rigg and Jonathan Pryce. She tries to demand her grandchildren’s freedom, even attempting bribery. He sees through her character, claiming he simply serves the gods and warns that the reign of the few will soon be triumphed by the many they have preyed on to get there.

Though he may be truthful, in this series it’s hard to believe when a character doesn’t serve themselves. Does he truly serve the gods or does he simply want to dethrone the corrupt? Hopefully we’ll find his true motives in Season 6.

In King’s Landing, Tommen throws a tantrum frustrated that he cannot help his queen. Cersei internally laments her only son’s outburst and the affection he has for the woman she despises. She delves into a heartfelt speech that depicts exactly how much her children mean to her as the two are tearful.

Cersei: I would do anything for you. Anything to keep you from harm. I would burn cities to the ground.

Keeping up with The Lannisters, we move to Dorne with Jamie and Myrcella. He discloses why he came to Dorne as Myrcella refuses to accept any reason. She iterates her happiness in Dorne with her beloved Trystane ignoring any warning Jamie brings. The Lannister twins are paralleled in their parenting here as the game of thrones continues to tear the lions apart. 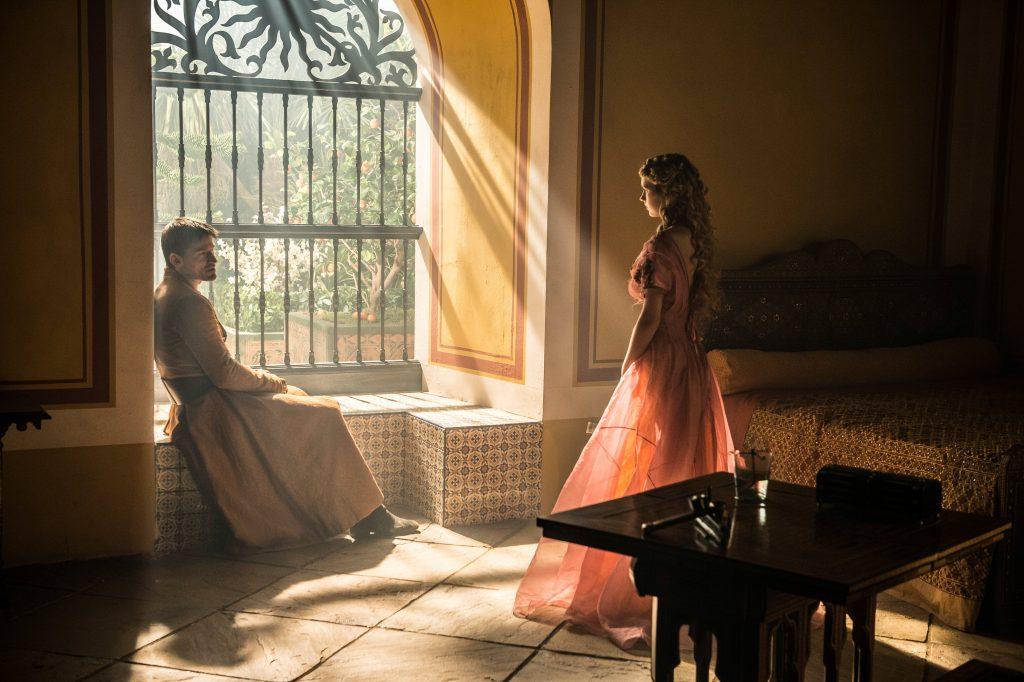 Sapochnik plays with lighting here brilliantly as Jamie is basking in the light while he tries to illuminate Myrcella of the danger she’s in while being kept in literal darkness.

In the prison cells of Dorne, we find Sand Snakes, poison, and The Dornishman’s Wife (“What? He’s got a good voice!”). The scene shows the Sand Snakes’ weapon mastery extends to poisons and antidotes where they no doubt picked up a few tricks from The Red Viper. It also doubles as foreshadowing for Myrcella’s assassination in displaying what the Snakes are capable of.

In the shambles of his brothel, Littlefinger meets with Lady Olenna. She extorts him by reminding him they both played a role in Joffrey’s murder though he still plays loyal to Cersei. He assures her that she will get her just desserts as he has also given the High Sparrow a gift, similar to the one he gave Cersei. Sapochnik plays with the lighting here as well and the result is glorious. 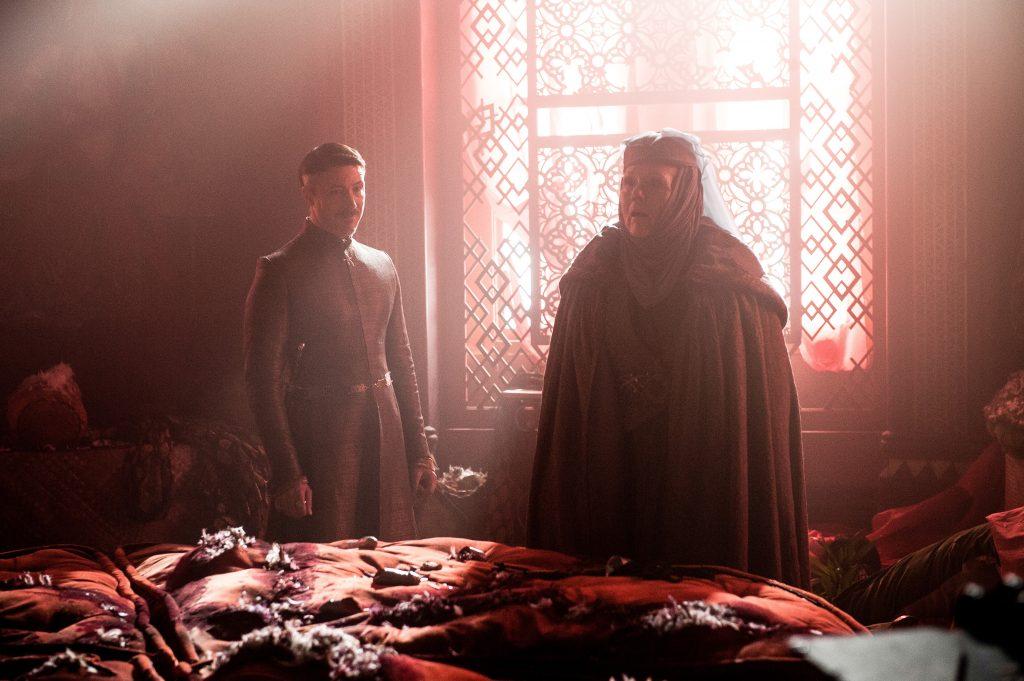 Remembering Littlefinger’s “knowledge is power” quote from Season 2, it makes sense that he is the one illuminated in this scene. The symbolic red lighting not only signifies the violence that occurred here but also illustrates the volatile nature of Littlefinger.

In Meereen, Daenerys and Hizdahr sit through the preliminary fighting matches. As the bloodshed ensues, Dany is sickened by the brutality. Jorah takes note and dons a helmet to conceal himself. He incapacitates the other fighters and is revealed before the khaleesi.

Daenerys: Get him out of my sight.

Iain Glen never ceases to amaze me in his depiction of Jorah’s love for Daenerys. Like in “The Mountain and The Viper,” his acting is pure and effective. He protests, claiming he brought her a gift. Tyrion steps forward and introduces himself much to Dany’s surprise.

I always forget the episode doesn’t end there as it very well could. We see gifts being given all around as Cersei visits Margaery in her cell and brings her supper. Natalie Dormer channels the vicious rage Margaery has pent up for Cersei effortlessly. She reveals Cersei’s faults in character were what made it so easy for her to snatch Tommen away. The Lioness is unmoved by these remarks mocking her further; “sleep well, sister” is a nice callback to the exchange between them previously.

Cersei smirks victoriously as she makes her way to the High Sparrow. He perceives the fineries stripped away from House Tyrell and questions what they will find when the same is done to House Lannister. He reveals the gift Littlefinger gave him as Lancel steps out of the shadows. 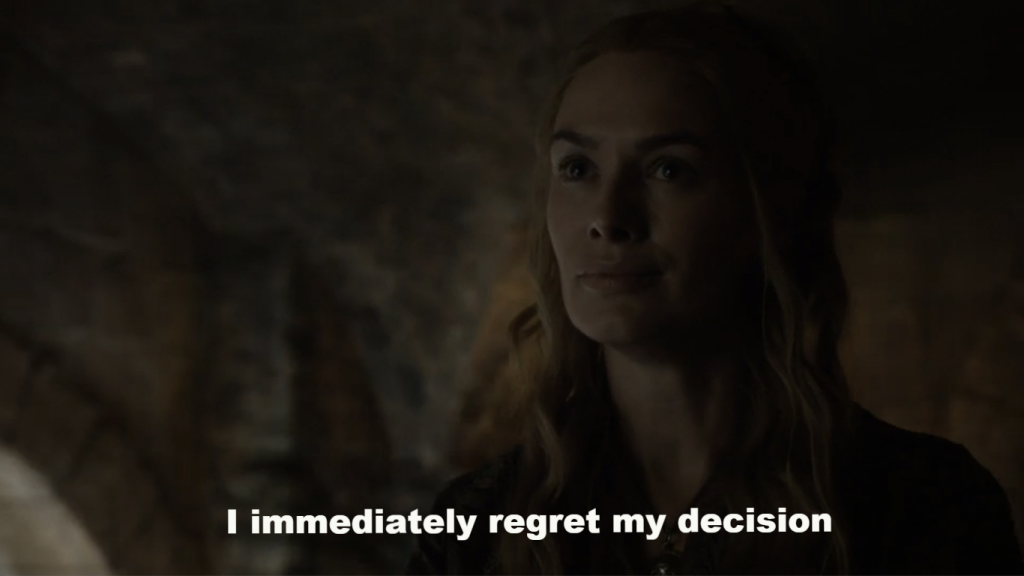 Sapochnik is exceptional throughout this episode with his choice of lighting. Here we see the High Sparrow and Lancel also illuminated where Cersei is kept in the dark. It mirrors their exchange as it presents each with their level of knowledge. As cunning as Cersei is, she does a complete 180° in this scene at the last outcome she’d expected. She created her own nemesis by arming the Faith Militant and now she’s cornered. In a desperate attempt to flee, she’s arrested and imprisoned where she delivers my favorite Cersei quote to date.

Cersei: Look at me. Look at my face…it’s the last thing you’ll see before you die.

Ending with Ramin Djawadi’s haunting “High Sparrow” adds to his victory as we close-up on Cersei’s new door.

“We march to victory. Or we march to defeat. But we go forward; only forward” – Stannis Baratheon

“I killed a White Walker. I killed a Thenn. I’ll take my chances with you.” – Sam the Slayer

“Don’t spar with me, little fellow.” & “They’ll never even find what’s left of you.” – Lady Olenna

“The past is the past, the future is all that is worth discussing.” – Littlefinger

“A life of wealth and privilege has left you blind in one eye – you are the few, we are the many, and when the many stop fearing the few…” – High Sparrow 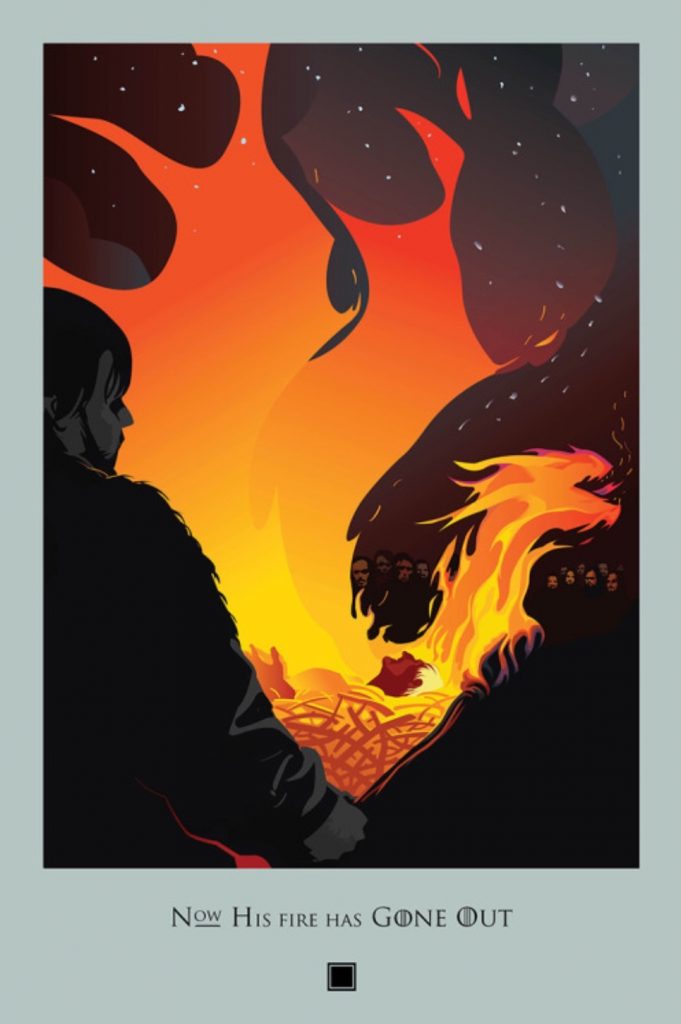 “The Blood of The Dragon” for Maester Aemon by Robert Ball from his Beautiful Death collection.

Join us tomorrow when Winter comes to “Hardhome.”