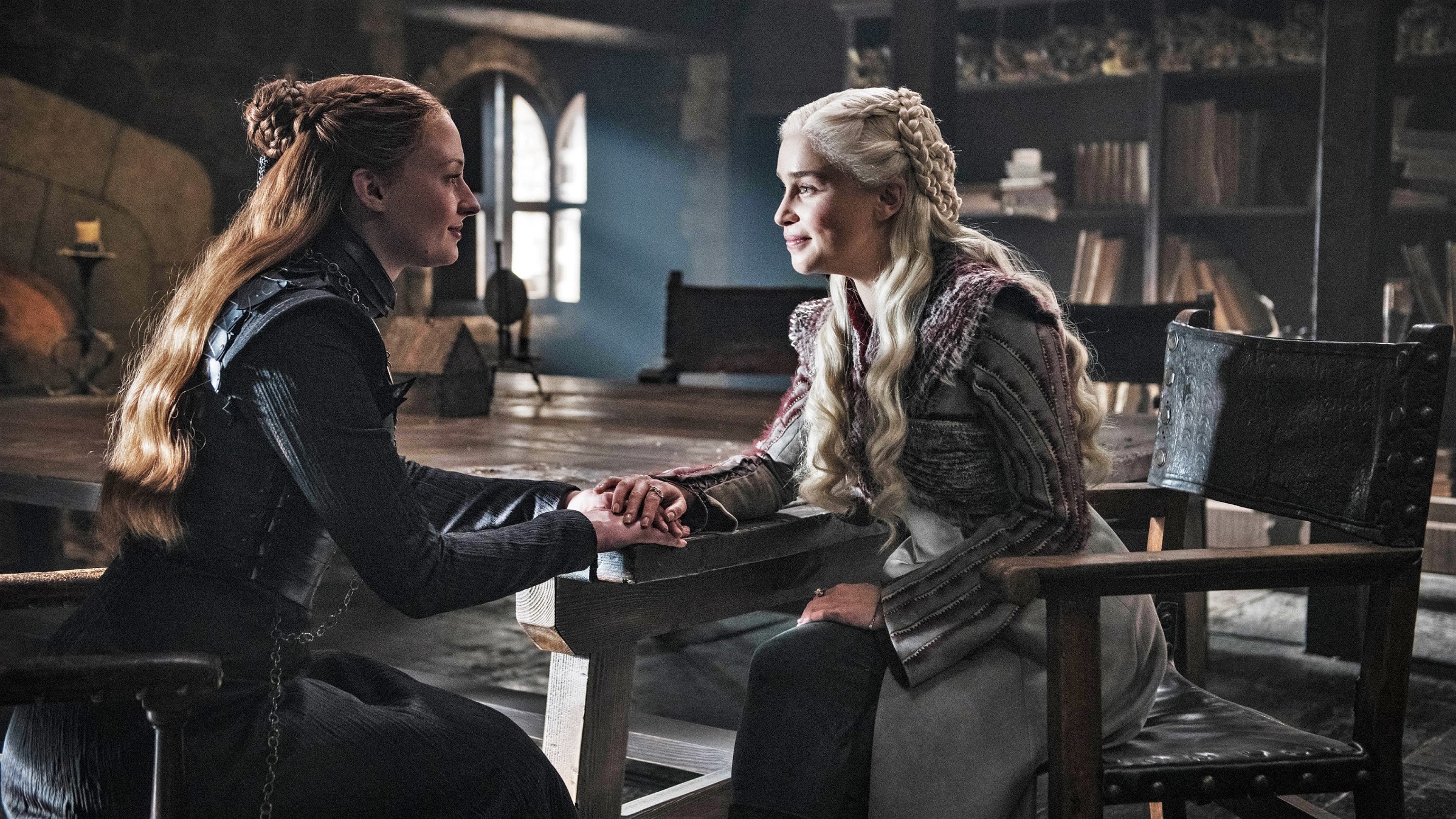 This week on Game of Threads: two characters carry the (new) sartorial weight of the entire episode. But it is carried in stunning fashion.

Our main cast is currently, and rightfully, only concerned with arming themselves in steel and mail and dragon glass, or disrobing for some end-of-the-world love-making, so this will be short and sweet, showing Sansa and Daenerys suiting themselves up with their own take on armor. 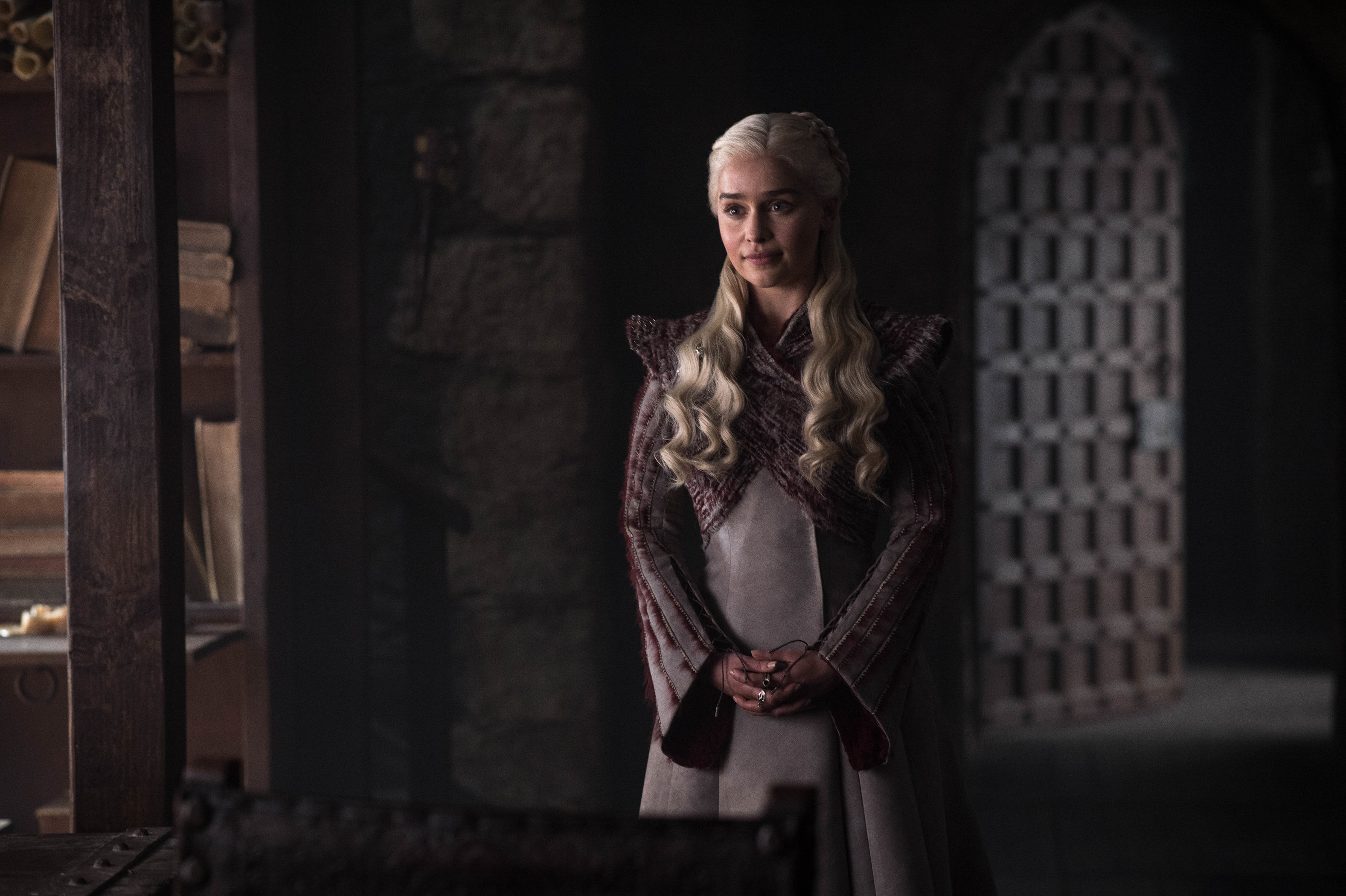 Dany continues to wear her white fur coat for the most part, which seems to be her now go-to piece for battle meetings and, well, battle. However, when she questions Jaime in the great hall, and when she approaches Sansa privately, she decides to tone down the outwardly impactful colors. Her newest piece is a beautiful grey leather, perhaps also adopting the Northern tones to show solidarity, but still running through the seaming is her Season 7 custom Targaryen color- a mix of the red and black of her sigil, as well as silver dragon scales beaded into the shoulders, imposing her birthright and ultimate goal in Westeros. Still, Dany presents herself in a way that is she is hoping will be much more approachable, especially to the person she would like to appeal to the most: Sansa. 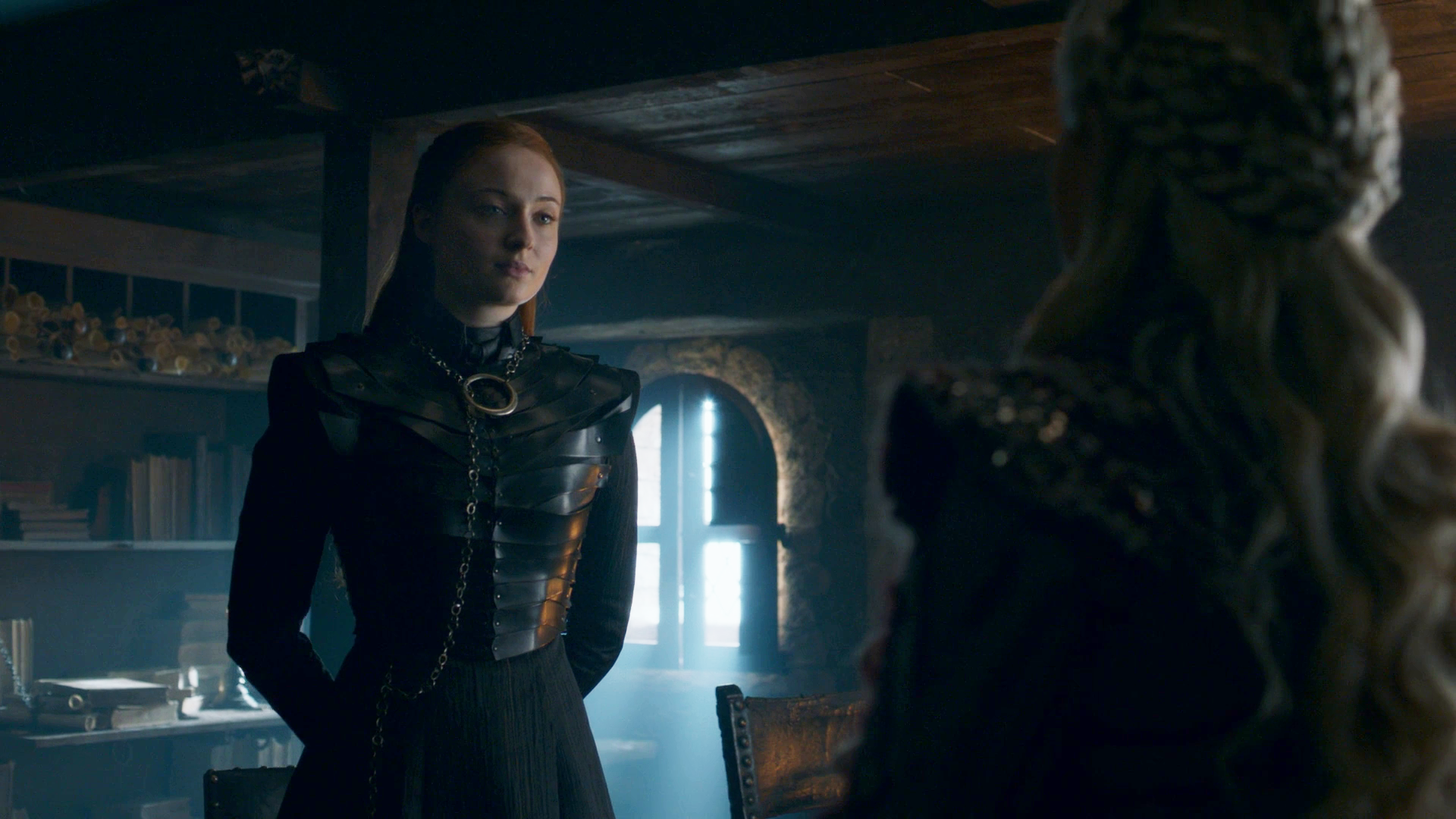 Sansa takes the opposite, STUNNING approach, in what is one of the most gorgeous costumes to come out of Game of Thrones. She is armed for battle, but her dressing is also a direct response to the issues that have arisen with the new queen in Westeros. A fashion retaliation showing that she and her family will not be fucked with.

The overall silhouette and fabrication also very much ties her to Cersei in the black, high-neck dresses with layers of elements that close off her body to enemies, but there is still a softness to the way the leather is designed. It evokes her classic dragonfly motif, and even gives the illusion of wings that she likes to put into the clothing she makes for herself. It calls back to her dark, feathered gown at the Eyrie, and her “Little Bird” nickname from Cersei. Both Sansa and Cersei have been through frighteningly awful circumstances in their roles as women of the royal court, but Sansa shows a deep love and responsibility for protecting her family and her people. 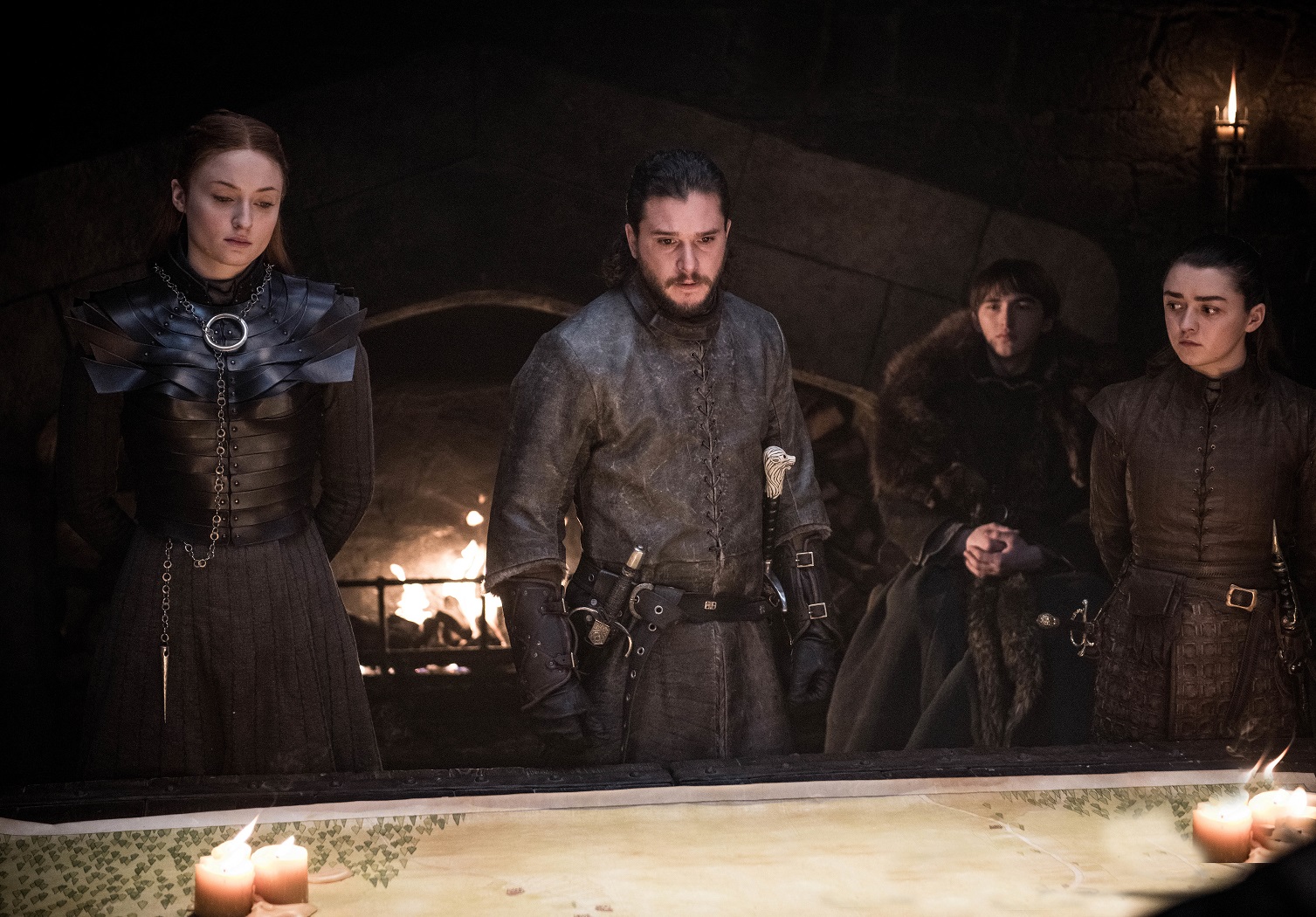 As they both continue down their respective paths, however, Cersei continues to add spikes and hardness to her dresses, while Sansa keeps her humanity intact with hers to further show allegiance to her family, which is most obviously represented by her favored circular “needle” necklace. Costume designer Michele Clapton actually responded to a tweet recently, stating, “I use circles as they represent a positive emotional message of harmony and protection. The circle is often used to represent unity and commitment, they are associated with women’s strength.”

Also, though this isn’t strictly costume-related: Sansa, Jon, and Arya are all wearing their own version of the same “Stark hairstyle”, which their father Ned most often wore: 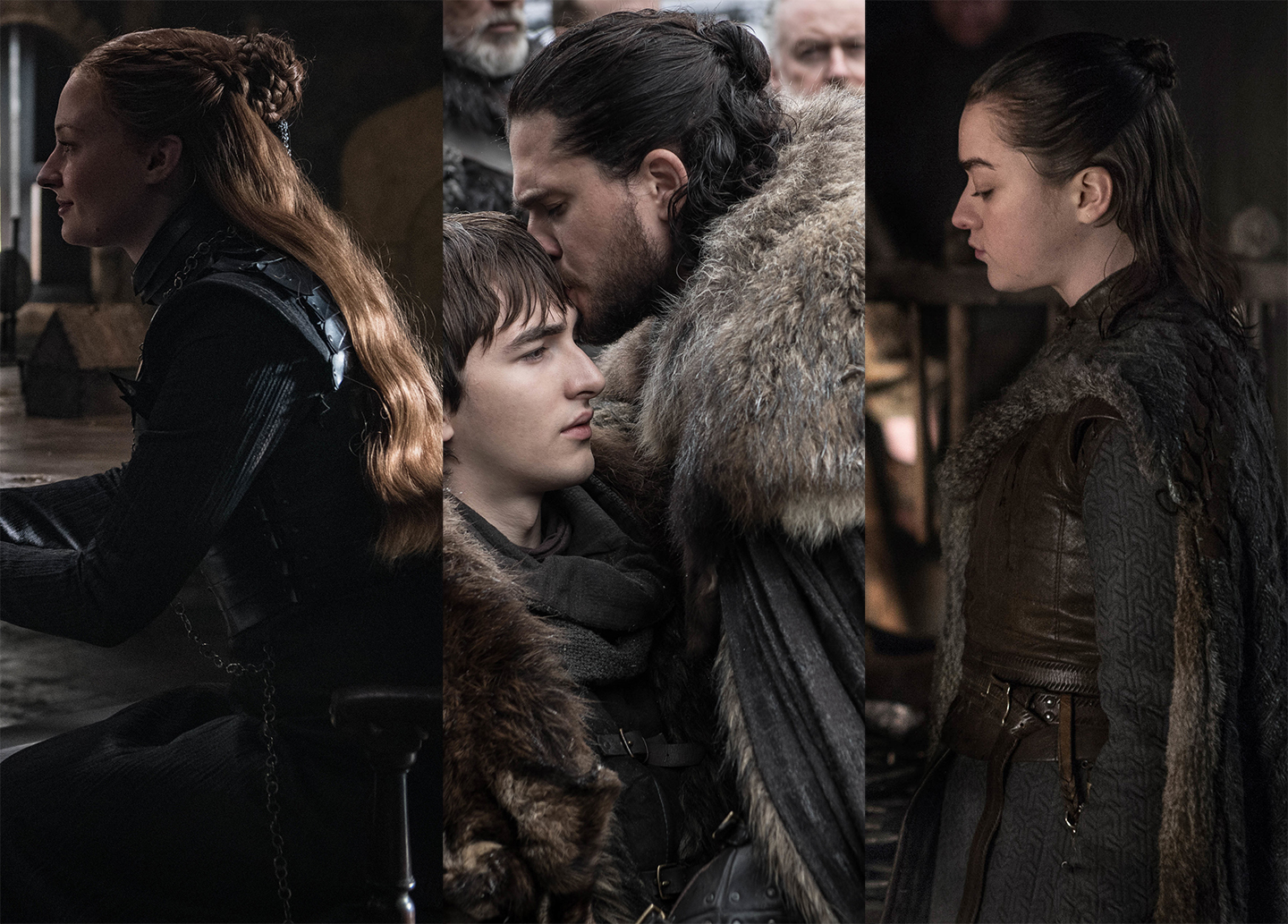