On the Fandom Road: Making Connections | Watchers on the Wall | A Game of Thrones Community for Breaking News, Casting, and Commentary 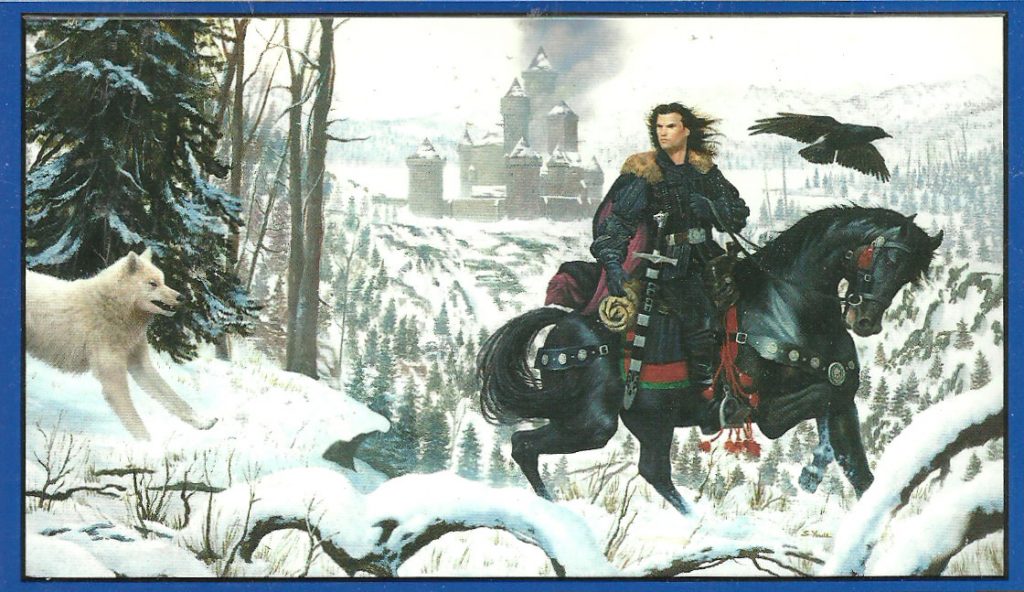 My journey with Game of Thrones literally started with a journey. In 1999, I was at LAX waiting to fly back home from SIGGRAPH 99, the graphics conference that I’d attended for work. I didn’t have an unread book on me for the flight home, so I picked up a copy of A Game of Thrones. As I recall, it was the one with Jon Snow on the cover and Winterfell in the background. (I know it was Jon Snow and not Ser Waymar Royce because Ghost was on the wraparound cover too.)

I’d like to say that I voraciously consumed the book on the flight, but I’d be lying. I think I set it aside so I could take a mid-air nap when Bran was climbing up a tower in Winterfell. You know, no big deal. Turns out I’d missed Bran’s mid-air experience.

I set the unread book on a shelf when I got home, and it stayed that way for years. (I have a large collection of half-read books cluttering up my shelves, competing for attention.)

Even though I hadn’t yet started A Song of Ice and Fire in earnest, I was aware of the books that followed. I had friends who kept asking me if I’d read the series, and then I’d hear their complaints of how slow George RR Martin was about finishing the fourth book. When A Feast for Crows did come out, I heard their dismay that he’d only included half of the point-of-view characters that they’d expected, leaving out some of their favorites.

Their frustration wasn’t quite convincing me to start up reading again. I mean, they were all so distressed. Did I want that? But I bowed to pressure and started over with A Game of Thrones. Bran being pushed from the tower was rather shocking to me. I had been just pages away from that the time I’d been reading originally on my flight home.

But as I was following along with Ned coming into King’s Landing with hints of treachery and treason all around him, I decided I did not want to read this book. In college, I had a friend who had read all of Katherine Kurtz’s Deryni novels, which is a series best described (by me) as a historical fantasy with grand political conflicts. My friend gave me a detailed summation of the books, along with his commentary that the “good guys” were constantly undercutting their efforts to defeat their less savory opponents, by being hamstrung by their own adherence to their virtues.

Reading about virtuous Ned entering the decidedly unvirtuous King’s Landing, I was worried if I would enjoy a book where the noble protagonists are just brutalized constantly by unscrupulous opponents. So I put the book down.

My friends ganged up on me. HBO announced that in 2011 they would be airing a series based on the books. Afraid that I was going to be left out in the dark, I dusted off my copy of A Game of Thrones with the intent of bulling my way through it.

This was around Thanksgiving of 2010, so I had roughly four months to read this book. I took my copy and a flashlight with me to wait in line at a Best Buy for a Black Friday sale. Jon’s chapters of being at the Wall have a certain tangible component if you read them in the dark, standing outside in the chill of November. I was reading about Ned Stark sending Beric Dondarrion to interdict the Mountain when the doors to Best Buy opened up, and I was a bit annoyed that I had to put the book away. This time, I’d been completely hooked on what was going on.

I finished the first book, and recommended it to my wife, Lisa. She was not all that interested in reading fantasy and my recommendation was not a convincing factor. But thankfully our goddaughter had also recently read A Game of Thrones and convinced Lisa to read it. I’d borrowed a copy of A Clash of Kings and was reading it while Lisa started in on A Game of Thrones. She finished up the first book before I was halfway through the second one, and stole it from me. From then on, Lisa was ahead of me on reading.

Her punishment for getting a jump on me was in encountering the Red Wedding long before I did, and not having anyone to process her feelings with, while I was glacially making my way through the books. I knew something big was going to happen, because she had this haunted look whenever she asked me how far I was into A Storm of Swords. Once I got to the Red Wedding, the second time I threw that particularly book across the room, I could commiserate with her.

2011 was spent either convincing people to check out the show, or getting people to read the books. I picked up a new edition copy of A Game of Thrones for my dad as a Father’s Day present, telling him that it featured great examples of good and bad paternal figures. After reading it, he bought a set of the four published books.

I’d convinced most of my office colleagues to watch Game of Thrones on HBO. Then nearly all of them picked up the books after the season finale. I am somewhat in the doghouse now that I’ve been promising that The Winds of Winter is just on the publishing horizon. For years. It’s a wonder I’ve not been fired.

The TV show LOST had introduced me to the concept of recap podcasts, and I began listening to Game of Thrones focused podcasts which ranged from ones featuring book experts to those hosted entirely by people whose only experience was the show. There were so many bad takes, and I felt it would be rude to send in argumentative emails, that I began to publish blog posts on my WordPress blog, mostly articles in defense of Game of Thrones characters or their actions.

I’d never heard of Reddit, and didn’t know that there were years of well reasoned subreddit analysis (as well as some not-so-well reasoned suppositions) based on the books. Writing in isolation, it was always a joy to run across some other Game of Thrones blog, or have someone read and comment on a post of mine. It was nice to make these connections with people.

When George RR Martin came and talked as Guest of Honor at Balticon 50, I met so many popular Game of Thrones podcasters and /r/asoiaf moderators that it put into perspective how little I knew of the fan community surrounding the show and books. It was a humbling experience.

In 2017, the first Con of Thrones convention was held in Nashville, Tennessee. I hadn’t necessarily planned on attending, but Lisa surprised me by buying us memberships as a Christmas gift. Friends of mine leaned on me to submit panel suggestions for the convention, and I submitted so many of my blog posts as topics for panel discussions that the convention programming team was either impressed by my enthusiasm or felt pity on me and added me as a panel participant talking about the Night’s Watch.

I made friends with other podcasters whom I had been listening to for years. Be nice to podcasters when you email them, my friends. Like the North, they remember.

To my relief, I made a good impression overall at the convention and when I responded to a call for feature writers for Watchers on the Wall, I was accepted and began to write up opinion articles for the site during Season Seven and after.

Now that we’re in the final season, there’s already a sense of loss that in just under two months the show will be over, despite the potential of successor shows and the promise of the last of the books for A Song of Ice and Fire.

My dad was always keen to talk Game of Thrones with me in off-season family gatherings, complaining that he might not live long enough for all the books, and how he has forgotten what happened the previous season of the movies (Dad always calls them movies, and I am reluctant to correct him.) But he also enjoys talking about what a genius Martin is for his world, and how he admires Martin for his research and use of real world historical parallels.

It is gratifying to me that my dad reads my blog posts and feature articles (my high school English teacher would be shocked based on my lackluster efforts as a student, but she deserves no credit.) It is charming to me that my dad keeps asking if George RR Martin, the author who so much of my writing is based on, reads my work.

No, Dad. No. My picking up a book at an airport bookstore kicked off my making connections with many, many people. But not that one.