As someone who is only 26 years old, Game of Thrones’ Ellie Kendrick sure has accomplished quite a lot thus far. Besides being responsible for bringing the character of Meera Reed to life, a role she’s had since the show’s third season, the British actress is currently starring in two upcoming films: Gillies Mackinnon’s Whisky Galore! and Hope Dickson Leach’s The Levelling.

Kendrick sat down with Independent recently to discuss these various roles, and how the young actress got her start in front of the camera.

In terms of Meera’s role in GoT’s upcoming seventh season, Kendrick unsurprisingly remains tight-lipped. However, she does open up about one of the more exciting scenes she previously filmed, a north-of-the-wall fight sequence from an earlier season:

“There was one series where I had to fight with a group of zombies, the ‘wights’. I had to learn all the steps of it, like a dance. We were filming in a disused quarry just outside Belfast that had been covered in fake snow. I had to fight these stunt men who were dressed in green Lycra suits because they were going to be replaced (in post-production) by the skeletons. It was such a surreal experience. I had to do that, remember the precise timing and then film it again but with no opponents.” 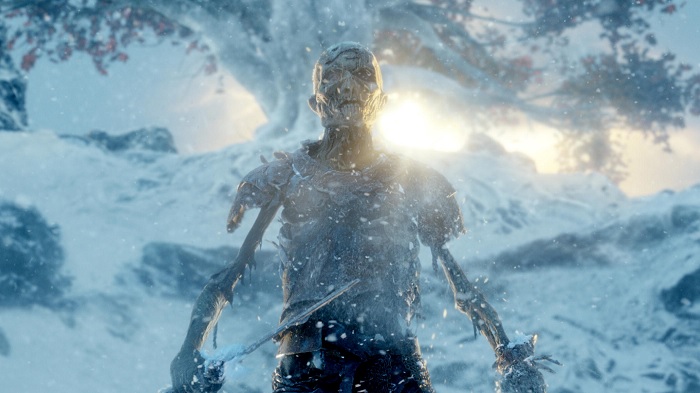 Growing up, Kendrick attended an all girls’ primary school, and it was there that she somewhat accidentally fell into acting. Kendrick explains that the male roles in the school’s plays were none too popular among the all-female casts, so she decided to enroll in the theatrical program and take on the task of portraying those undesired parts. This allowed her to nab roles such as Mozart in Amadeus and Puck in A Midsummer Night’s Dream. “In the whole time I was there, I think I only played a woman once or twice”, says the actress.

On the brink of completing secondary school, Kendrick landed her breakout role as Anne Frank in the BBC mini-series The Diary Of Anne Frank. This role was followed by a stint as Juliet in a London production of Romeo and Juliet.

After subsequently taking an acting break to complete her English Literature degree at Cambridge, Kendrick quickly found her way into the Game of Thrones fold, where she continues to thrive (at least for now).

Luckily, her professional life post-Thrones, whenever that time comes, seems just as promising. Along with securing a spot in an upcoming Pulitzer Prize-winning play based in London (the details of which have yet to be released), she’s also establishing herself behind the camera as a writer and director, with multiple television projects already in development.

As much as we hope Kendrick’s Meera stays around for as long as possible (as I’m sure Bran (Isaac Hempstead Wright) hopes for as well given where we left the duo last season), it looks like she’ll continue to find plenty of success upon graduation from the HBO heavyweight!