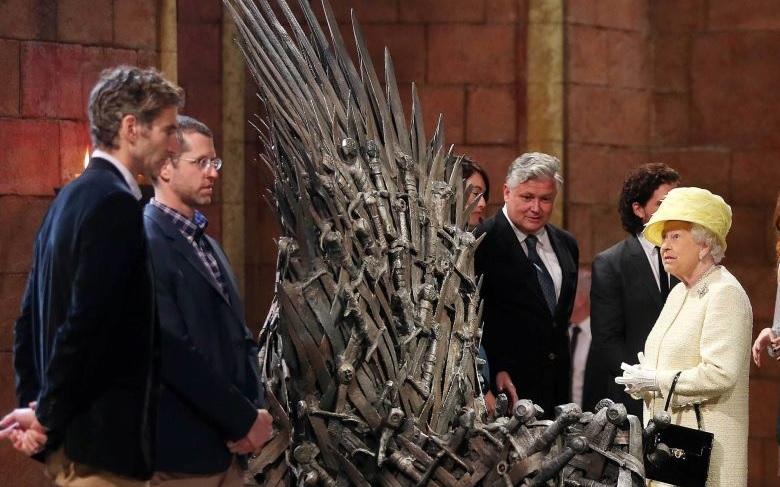 Executive producers David Benioff and D.B. Weiss appeared on Late Night with Seth Meyers this week, mostly answering questions we’ve all heard dozens of times. But there was one interesting tidbit- the showrunners explain why the queen of England declined to claim the Iron Throne during her well-publicized visit to the set in Northern Ireland last summer.

“Apparently the Queen of England is not allowed to sit on a foreign throne,” says Benioff. “This is an esoteric rule we didn’t know about until that moment.”

“That’s the thing about the queen, she’s a stickler,” jokes Meyers.

More news and light spoilers below the cut: 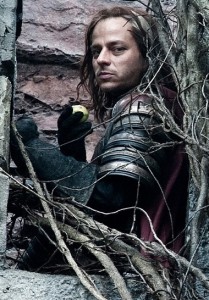 The secret’s out- there’s a familiar face returning to Game of Thrones, one many viewers thought they’d never see again.

Tom Wlaschiha‘s return to the show for the fifth season was revealed last summer when the news turned up on his German agency website. He was never sighted during filming, however, and nothing was official until a couple weeks ago when him name was included as a cast member on the HBO schedule listing for Game of Thrones.

The actor finally acknowledges his return, speaking with TVGuide.com.

“That’s really tricky. I thought, ‘Maybe I will be back, but not with my face,'” he says. “I was totally surprised. I’d always hoped to be back at some point, but with Game of Thrones you can never be sure. […] I think at some point in the season, [Jaqen and Arya] will meet.”

George R.R. Martin addresses the issues of the show’s endgame versus his own, in the same TVGuide.com article.

I think their endgame will be the same in broad strokes, but it will be very different in an enormous amount of detail,” he says. “We’ve discussed the ultimate ending of the book and the fate of many of the major characters. But as you know, there are many, many secondary characters, tertiary characters. I haven’t sat down with David and Dan and done a list of the top 150 characters and what’s going to happen to them in [the] books, so in some cases, the fates are going to be quite different.

And in other casting news: 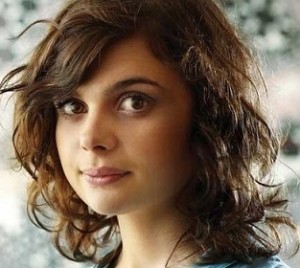 Last year, it was reported by unconfirmed sources that Welsh actress Gwyneth Keyworth would be playing the role of Clea in season 5. According to the casting breakdown we saw, Clea is a pretty young courtesan with nimble wit who shares a scene with Tyrion Lannister this season.

Keyworth’s agency CV has been updated to include her role on Game of Thrones in a Mark Mylod-directed episode, and so we can now consider this casting officially confirmed.

The actress has appeared on British programs such as Misfits, Case Histories, and The Great Outdoors.