By Eric Scull, co-host of Game of Owns

On Thursday, October 9, 2014, LakeShore Beverage Co., in association with Brewery Ommegang (Cooperstown, NY) held a public gathering to celebrate the recent release of Brewery Ommegang’s latest beer inspired by HBO’s hit series, Game of Thrones. The beer, a Dubbel ale called “Valar Morghulis” after a popular phrase from the series, was available on draft as well as its predecessor, Ommegang Brewery’s “Fire & Blood Red Ale.” Over 100 friends of craft brew and/or Game of Thrones bought tickets for the event, which also featured an interactive game, costume contest and live musical entertainment. This event was held within Moonlight Studios in Chicago’s West Loop.

The evening began at 6:00pm when a VIP Hour was held for additional ticket holders. This was a good time to find a table, try some of the beer without the full lines, and to meet with the organizers one-on-one. Members of WBEZ‘s podcast, called “Strange Brews,” recorded a podcast episode where they interviewed a representative from Brewery Ommegang. The podcasters also offered their suggestions for new entries in Ommegang’s Thrones-themed beer (you can listen to their full episode at this link). 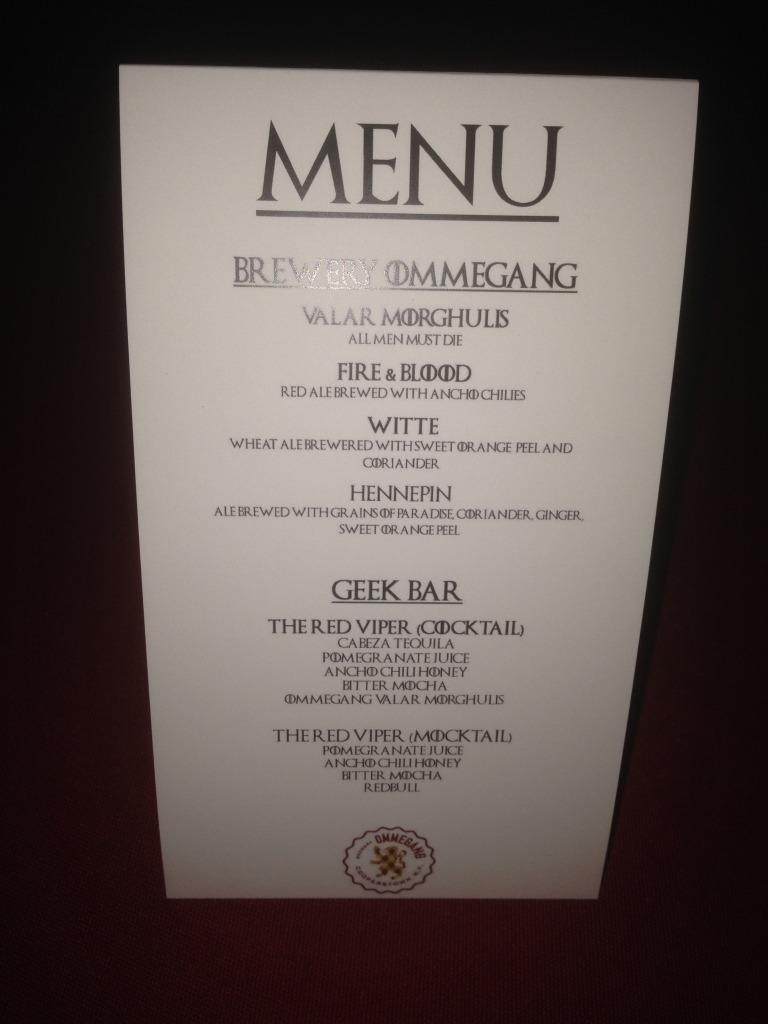 In total, four of Brewery Ommegang’s beers were available on draft throughout the evening. Valar Morghulis and Fire & Blood, as well as two of Ommegang’s non-Thrones beers, “Witte” and “Hennepin.” The event was also co-sponsored by Geek Bar, an upcoming Chicago eatery who developed two Thrones-themed cocktails for the event, both called “The Red Viper.” (options were for alcoholic versus non-alcoholic)

As with Lakeshore Beverage and Brewery Ommegang’s previous event, “A Wedding of Fire and Blood” (video recaps of which can be found here,  here and here) Internet sensation and identical-twin dual harpists Camille and Kennerly Kitt, also known as The Harp Twins, were on site playing their own twin-harp arrangements of the Game of Thrones main title theme, songs from the “A Song of Ice and Fire” books including “The Bear and the Maiden Fair” and “The Rains of Castamere,” as well as their own versions of classic rock ballads, for the entire three-hour event beginning at 7pm.

At 7:00, the event opened to regular ticket-holders and “Valar Morghulis: The Game” truly began. 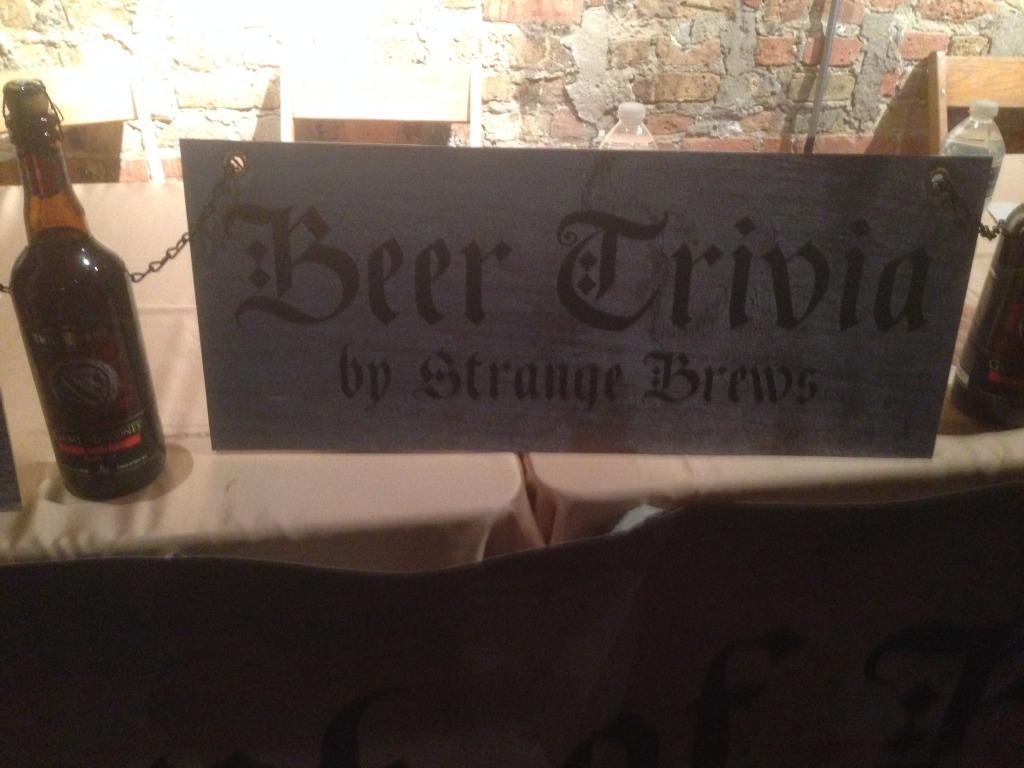 Every guest upon entering the event received a coin purse with game rules and a single Braavosi token. The game, which concluded at 9:30pm, was won by whoever held the most tokens at the end of the night. Tokens could be won in multiple ways: by correctly answering beer trivia questions presented by Strange Brews; by correctly answering Thrones trivia questions posed either at the same table or by the walking, talking Faceless Assassin (actor Clayton Faits) who traveled through the crowd; by locating Daenerys Targaryen’s (Lauren Faits) three dragons which were real dragon figurines scattered throughout the room; and by purchasing beer tickets (valid for one drink per ticket) for $5.

The secret to winning ended up being to donate your coins to a worthy cause (a friend) and the friends with the largest groups pooled their resources to win the grand prize, an expenses-paid trip to visit the Brewery Ommegang itself in Cooperstown, New York. 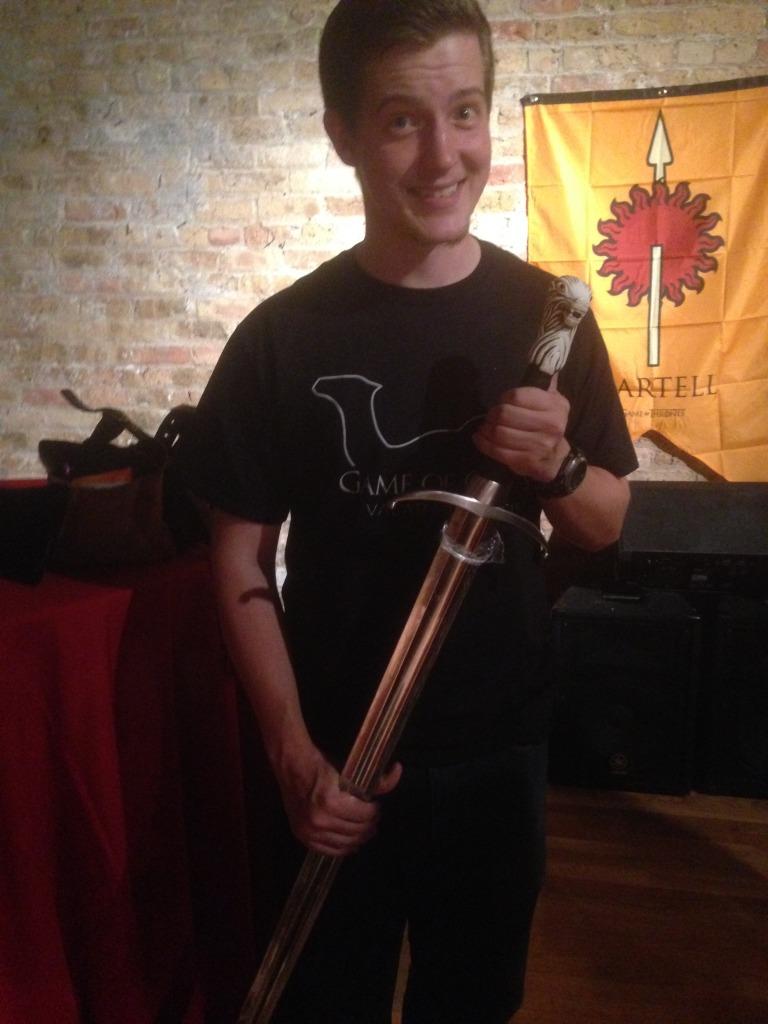 Perhaps the best costume was a Hodor, however, who did not participate in the contest but instead remained in character the entire night, and closed the event by offering a rousing (admittedly one-worded) speech. 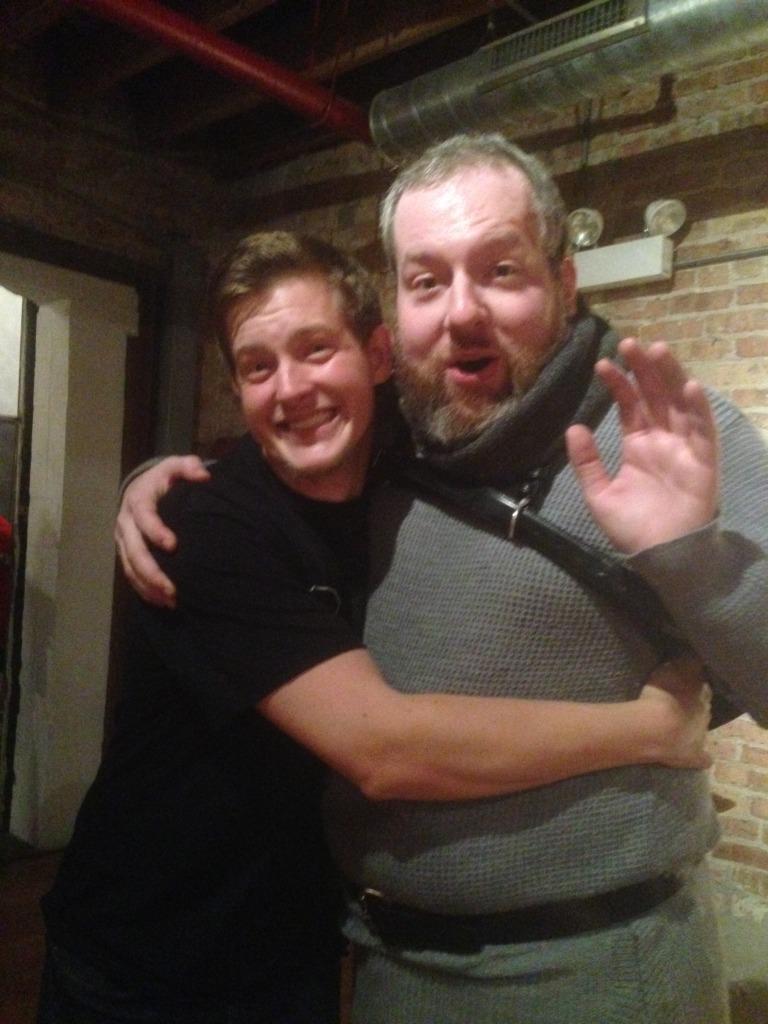 While the evening was planned by the extremely competent LakeShore Beverage Company, and the always high-quality Brewery Ommegang, this reviewer’s personal favorite event would have to be the Wedding of Fire and Blood, which took place at The Radler restaurant in Chicago this past March. While this event had some wonderful ideas (audience interactivity) and more things planned than before, the venue chosen for this event felt much smaller than last. There was no seating available (so guests were forced to stand for all 3+ hours), adjacent vacant rooms were not used to their potential, and organization at the event suffered deeply from a lack of any sort of proper sound system. It was difficult to tell what was going on at any given time as a result of overcrowding and lack of audience respect (in terms of volume control) for struggling announcers. The event organizers clearly know how to throw a cool event, the beer is always superb, and there is no reason to believe that their next event won’t be even more ambitious and successful.

Editor’s Note: We were given the opportunity to sample the Valar Morghulis ale at this year’s Capclave and found it to be a mellow beer with some fruity notes and plenty of foam! A nice choice for those averse to stouts, IPAs and Ommegang’s signature Belgian brews. More pictures and reviews by WotW staff will be posted soon to our tumblr. -Bex