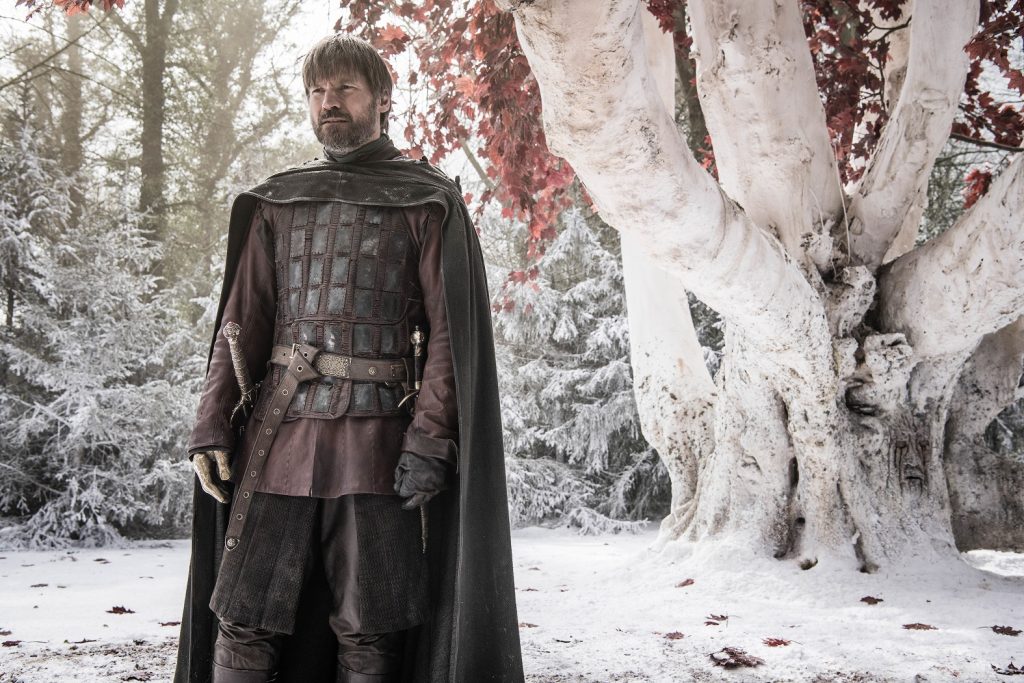 If there was any part of you that held doubt that you might not be emotionally invested come the onslaught next week, AKOTSK put that issue to bed without its dinner.

Installment 2 of the conclusion of the greatest show that ever was or ever will be gave Westeros a new knight, possibly the best fireplace congregation of all time, one less virgin, a distraught Queen, and a newly-crowned Westerosi Idol.

Come forth with a man, and let us prepare for an episode next week that will likely leave Winterfell (and all of us emotionally) in ruins…

I’m not going to give you some long prelude to the occurrences. I’ll just say that this episode filled in a lot of what was left to be desired from episode 1. I liked “Winterfell,” but I loved this one. It felt different. It felt complete. It felt “the feels” as Ozzette put it. 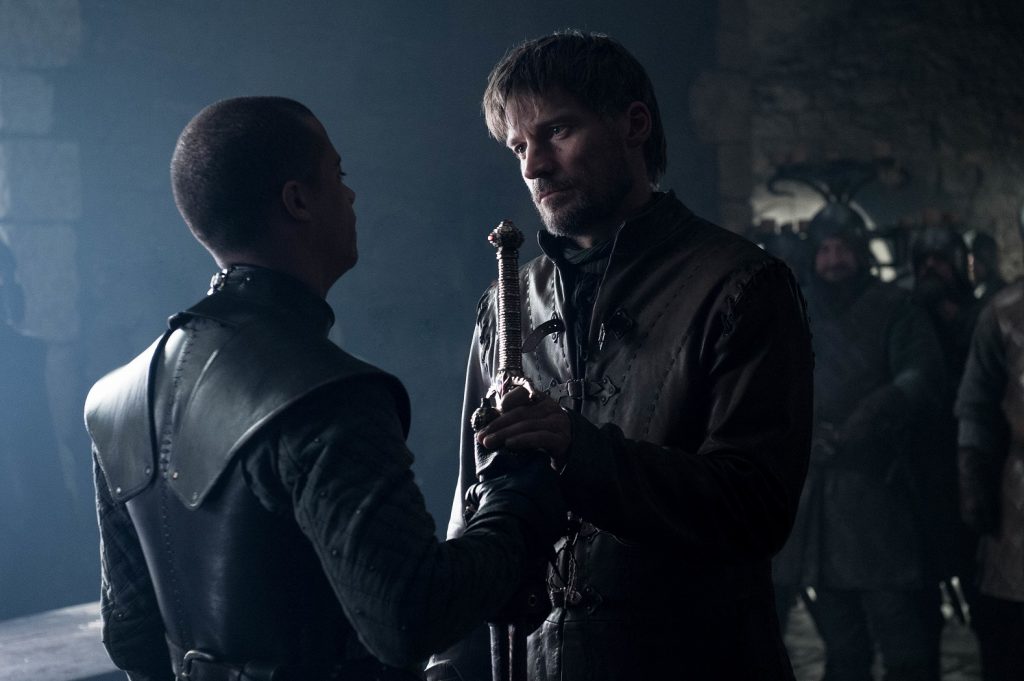 We kick right off with the prosecution of Jaime for all of his past transgressions. This portion went about as expected although I was concerned that maybe the judges would more question his loyalty to Cersei and whether or not he was being strategically planted to infiltrate the enemy.

In the end, it was Brienne that stepped up to the plate convincing Sansa of his good intentions. Jon is only slightly preoccupied with other thoughts at the time.

And Dany? She’s more concerned with what Jaime did to her dad after admitting on multiple occasions that she knew how horrible a person the Mad King was.  Her concern over whether or not her neck would be slit in the middle of the night was justified. But after the others vouched for him, she should have trusted them and welcomed him to the team.

Dany and her afflicted relations with Tyrion continue in the hallway as she calls him a traitor or a fool for not knowing Cersei wasn’t sending troops. Of course, she doesn’t know that Cersei used her pregnancy (mentioned later) to make Tyrion think her priorities had changed. Plus, Dany remains focused on the fact that Cersei still sits on the throne and she doesn’t which completely ignores the fact that THE FUCKING DEAD ARE COMING TO KILL THEM ALL.

Where’s the two-day shipping on my fucking weapon?

The sparks are flying with the forging of the dragonglass armament. Arya and Gendry have a few as well. Arya pushes Gendry to tell her about the dead and makes it clear that she is quite the warrior herself, pushing him to get her damn weapon made. Later on, speaking of shipping… oh God, I can’t even talk about it. 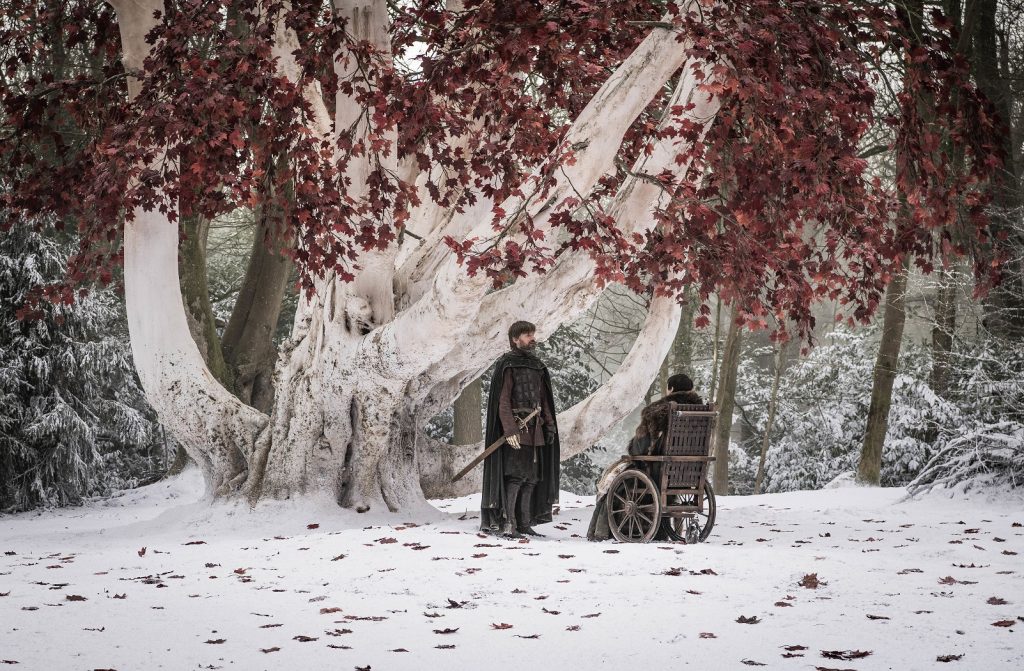 Jaime and Bran meet up at the neighborhood Playground de’ Weirwood to discuss the whole “you pushed me out of a window after I caught you fucking your sister” conversation.  This was also what I expected; that Bran holds no anger and understands that both of their paths would have been astonishingly different had the incident not occurred.

Later, the Brothers Lannister catch up while dodging Northman expectorate. They discuss Dany and mistakes Tyrion has made that justify her current doubt. This is where Tyrion also mentions Cersei using her pregnancy to make him believe she was telling the truth about sending the armies. Jaime gets distracted watching Brienne oversee training and goes to speak with her. 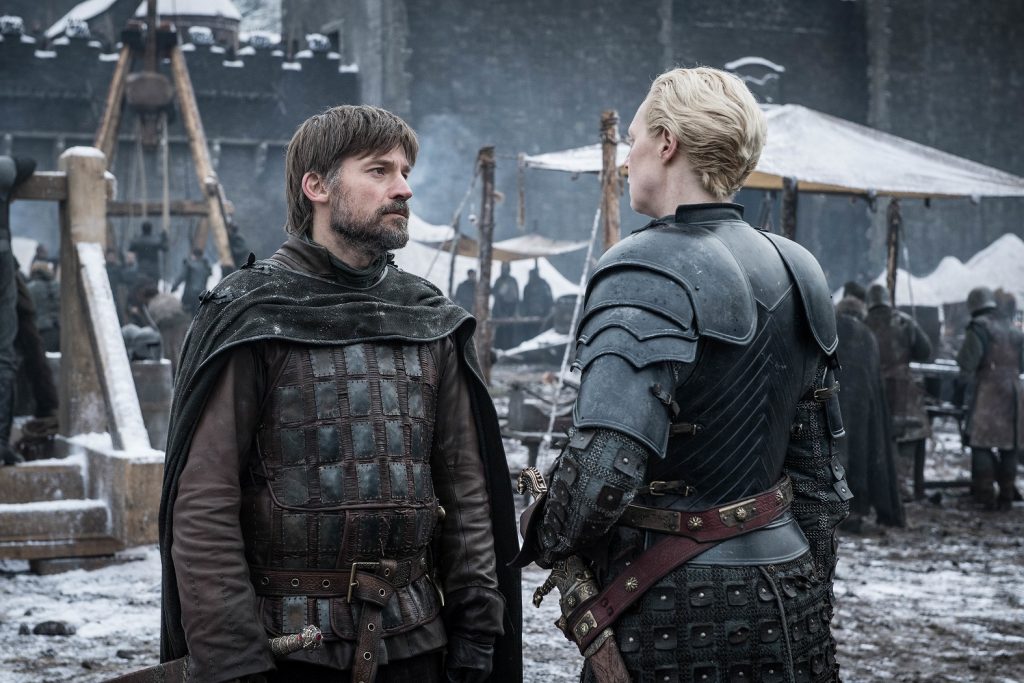 Podrick has apparently been showing up for practice early and staying late. Jaime and Brienne make small talk about it and discuss battle strategy when Big B asks where the damn insults are.  Jaime then humbly asks to serve under Brienne giving us the kind of emotional reunion we were looking for from other characters in episode 1.

Jorah enters to speak with Dany in what appeared to be a discussion about the mistake of making Tyrion her hand. But instead, Jorah tells her that it was the right decision stating that he owns his mistakes and learns from them. I feel like this conversation will have a major influence in the episodes to come. He also has one more suggestion… 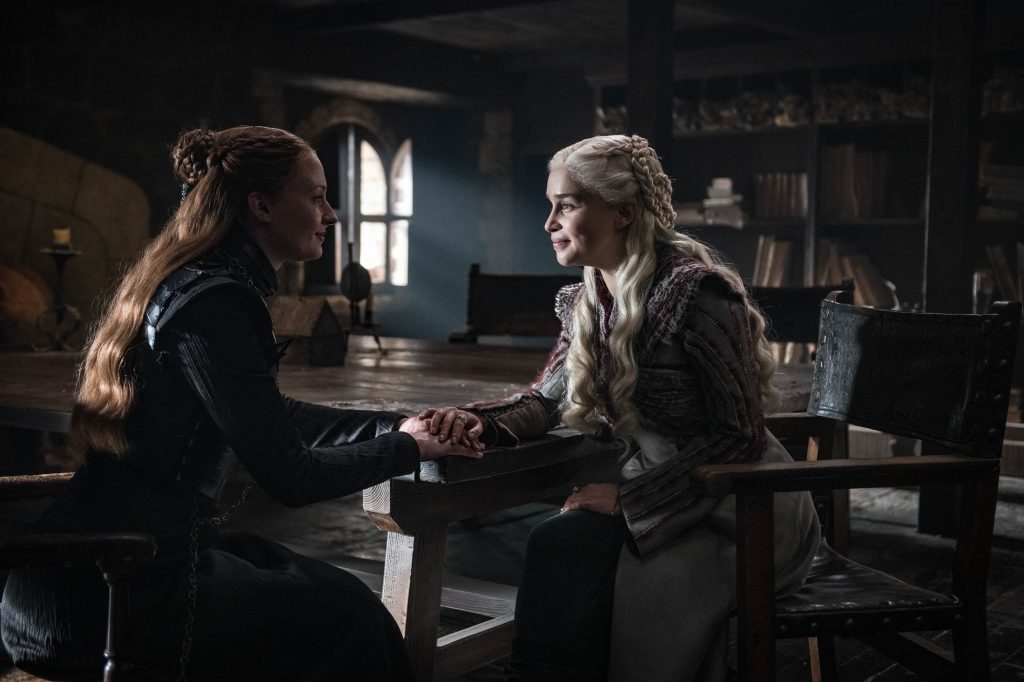 Dany goes to meet with Sansa to try and put aside their differences and work together for the greater good. When Dany finally stops talking down to Sansa, things seem to take a turn for the better until Sansa asks a legitimate question: “What happens afterward? What about the North?”

Sample #3: Dany still not happy and pulls her hand away from Sansa. And what was with the comment, “fighting Jon’s war?” Here’s another friendly reminder that THE FUCKING DEAD ARE COMING TO KILL YOU ALL!!

Then we get arguably the most powerful reunion yet… Sansa and Theon. How good was the acting between these two?

Davos serves it up hot and now when a little girl named Teela walks up and tells him she wants to fight. There was a definite reminder there of Shireen. You all emomo yet? Gilly talks the little girl into protecting her and Baby Sam in the Crypts. 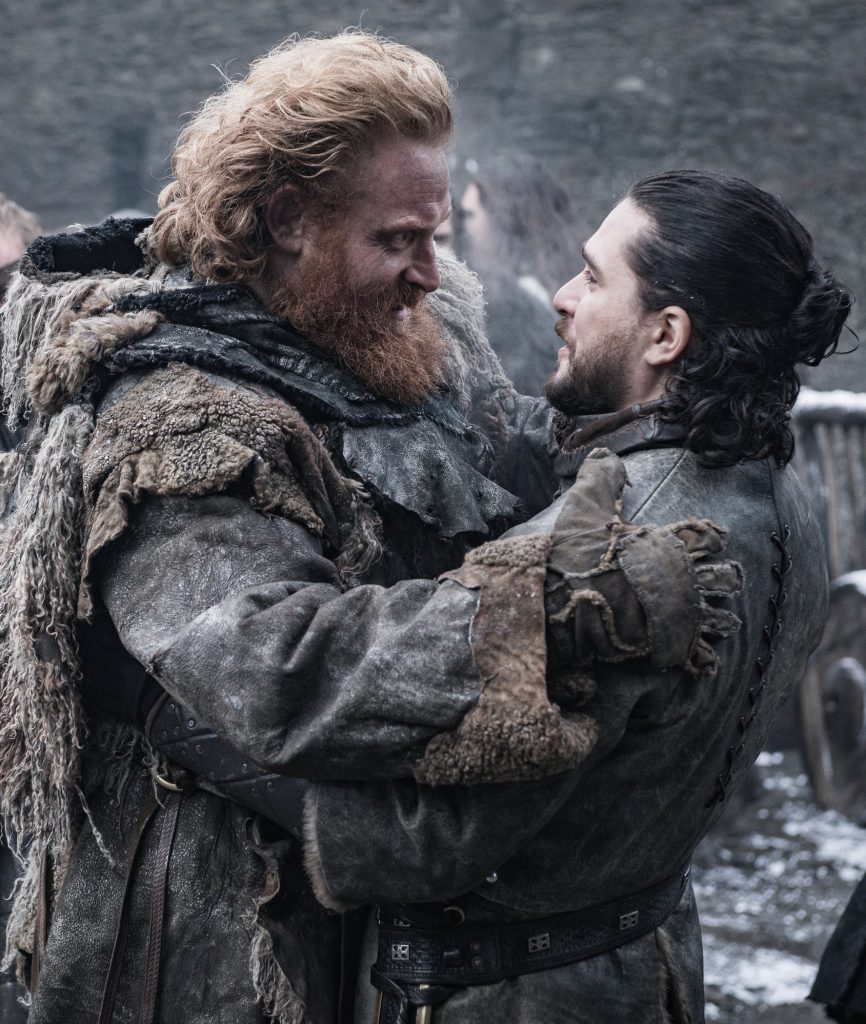 Meanwhile, Edd, Beric and Tormund show up to tell Jon that the dead will be there before the sun comes up tomorrow.

In strategy room, Bran explains that the NK will come for him to create an endless night and erase all memories and men from the world. Bran says that he will lure him to the Godswood and Theon offers to protect him (the Redemption of Reek continues). 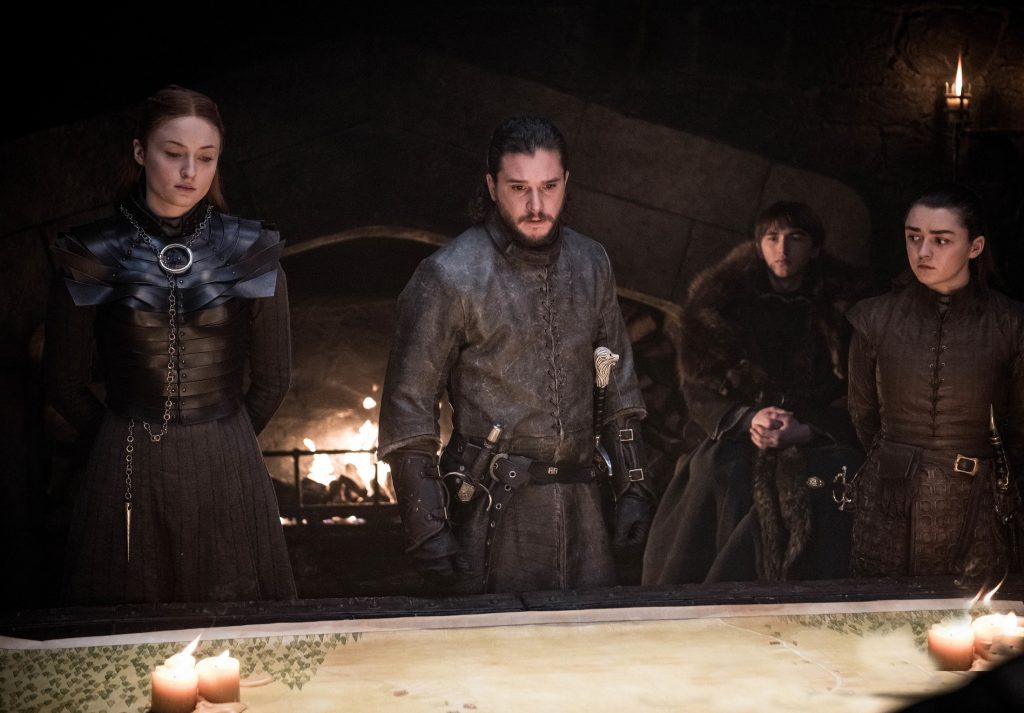 Tyrion gets relatively good news in that Dany commands him to be in the crypts instead of fighting (helping his death odds immensely). Bran also states that he doesn’t know if dragonfire will stop the NK.

This was a pretty telling discussion in that now we understand a little more why the NK is obsessed with Bran v3.ER. It also sounds like a decent plan if we assume that if they can kill the NK, the rest of the AOTD dies with him (see: wight heist, S7).

Side Note: The show runners could have devoted an entire episode featuring just Bran and Tyrion talking about their journeys to this point by the fireplace and I would have fully endorsed it.

And Now Our Watch Begins

Sam, Edd and Aejon all meet to talk about how far they’ve come since taking their oaths. Sam spouting his achievements to Jon after he suggests he goes to the crypts with Gilly and Sam was classic television.

Objective: To pursue a career in and actively contribute to the annihilation of white walkers, wights and associated frozen dead people. 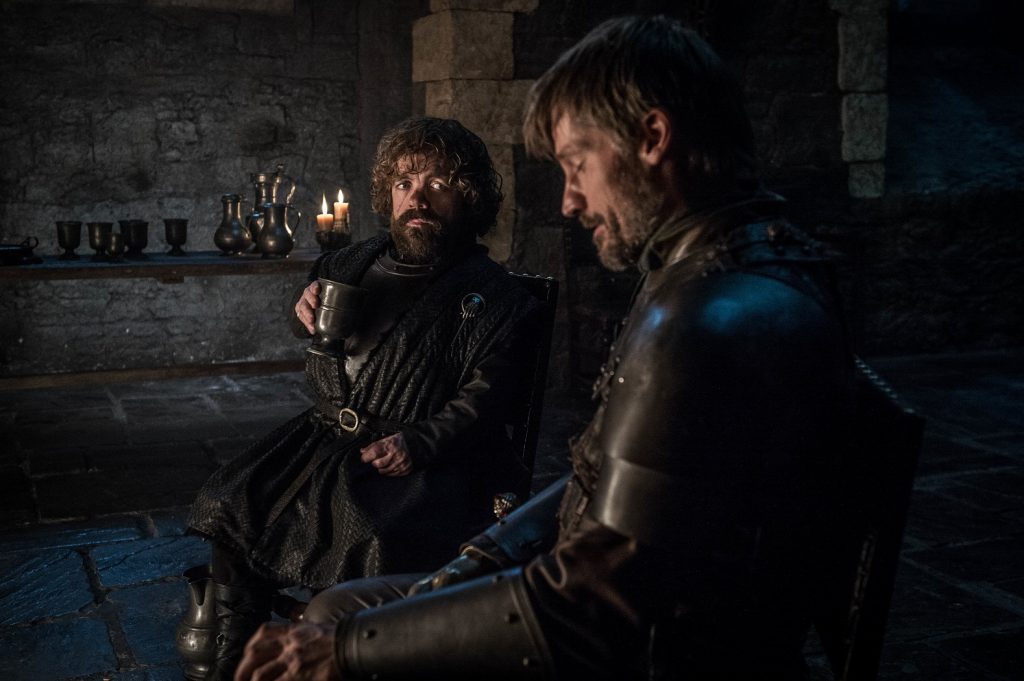 The greatest fireplace convention of all time occurred before our very eyes starting out with two brothers but quickly growing to include Brienne, Pod, Tormund, and Davos. We were lucky enough to hear the bedtime story of Tormund’s giant killing at the age of 10. 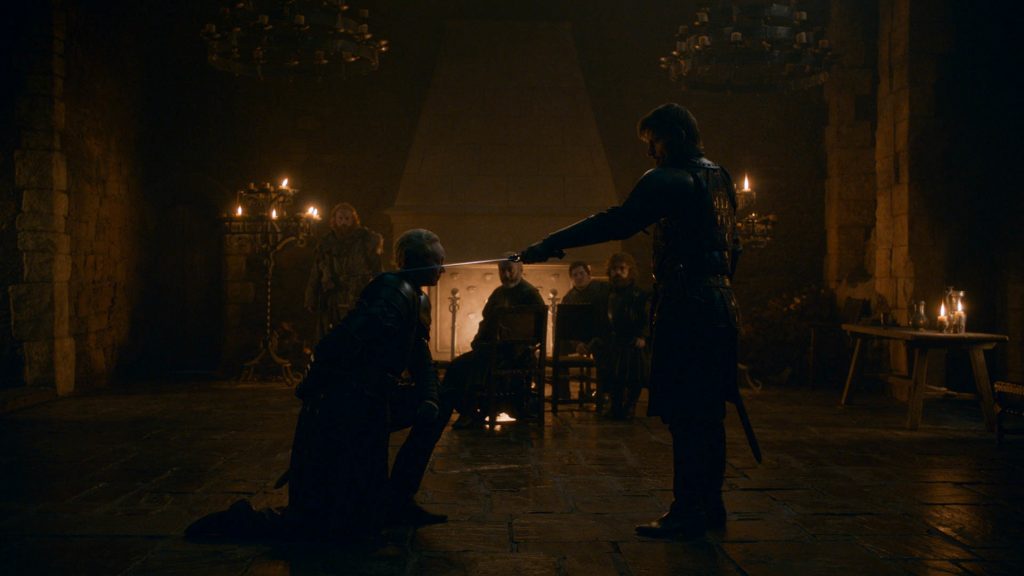 And then one of the most powerful scenes ever happens when our Lady Brienne gets knighted by Jaime. I know these are fictional characters. I know this is a TV show. But dammit, I don’t care. That scene, the words, the ceremony, and her reaction were damn powerful. 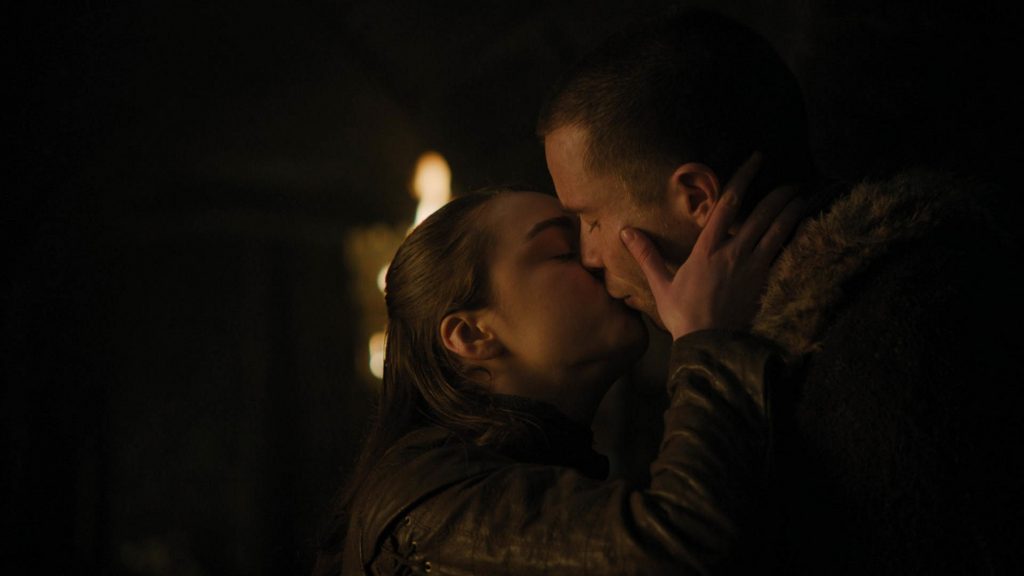 Is That a Weapon in Your Pants or are you just happy to see me?

Arya finally meets up with the Hound and Beric but excuses herself to go find someone to spend her time with other than two miserable old shits. And then..

Then the real sparks fly. Arya learns that Gendry is Robert’s bastard and the clothes come off. Did anyone else think it was weird observing this person who we’ve been watching on television grow up from a little girl suddenly get naked? It felt kinda… dirty. But, good for them. It had been a long time in the making. 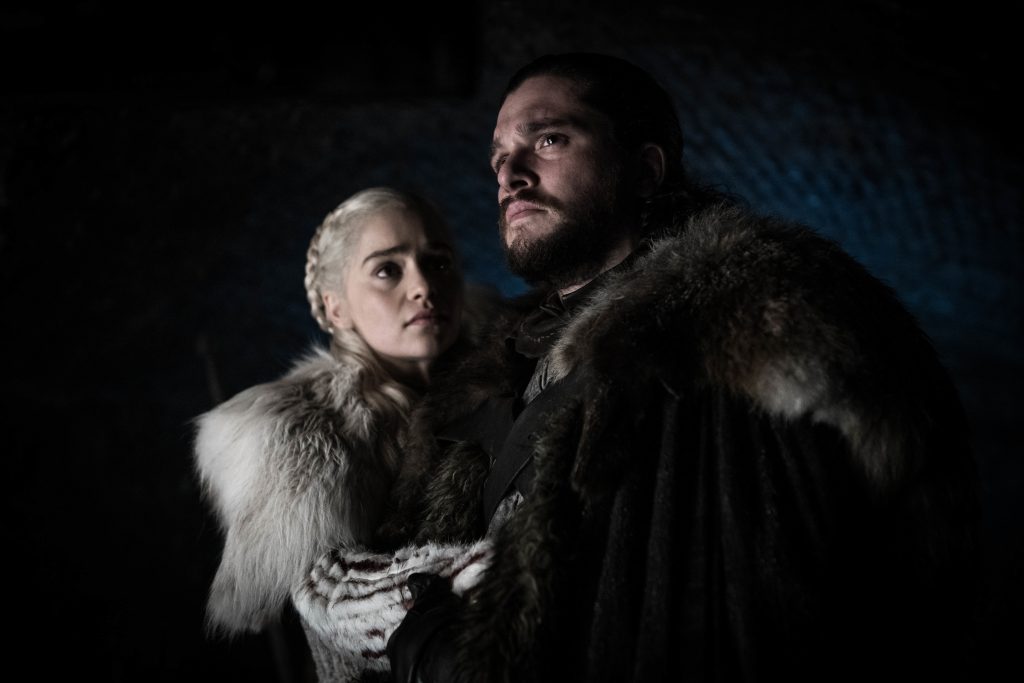 I really wasn’t sure if Jon would tell Dany right before the dead arrived considering none of them may survive anyway. But he does in the best way that he knows how standing in front of Lyanna’s statue. Dany unintentionally opens the door by talking about Rhaegar and the rape that wasn’t a rape. Jon explains what really happened, how he found out and that he knows it is true.

Sample #4-#6: Dany now REALLY not happy. Upon learning that her brother was not a rapist, and was married, and had a son before he died, and that she has a family member who is alive and well and standing in front of her, Dany automatically doubts the validity and is worried about how this threatens her claim to the throne.

I understand her mission since the beginning has been focused on the throne and learning that she may not be the rightful heir could be very traumatizing considering everything she has been through. But right now, her actions do not paint a very pretty picture of her true character. I’m not saying she’s mad. But at a minimum, she is being undeniably selfish.

I hope this changes. 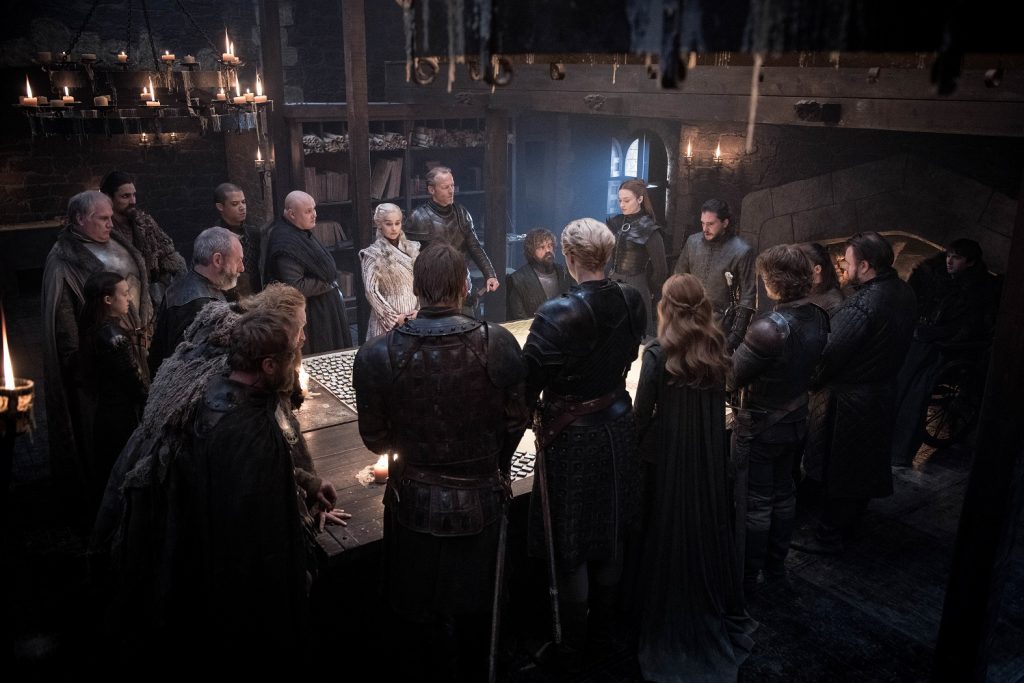 “How do you know there is an afterwards?” – Bran

“What about the North?” – Sansa

“It could be our last night in this world, you know?” -Giantsbane

Favorite Sequence:  The Knighting of Ser Brienne; the Theon and Sansa reunion, the Jaime and Bran reckoning, Sam giving Jorah “Heartsbane,” and basically anything Tormund says.

The “Ow, That Shit Hurts Award” goes to: Dany’s claim.

Overall Thoughts: When Pod finishes up the party with a night-night song about Jenny and her ghosts and Sam lays down with Gilly and Baby Sam, Missandei and Worm kiss, and Theon glares into the eyes of Sansa, you know that we are getting near the end of the road for many of them. This episode filled in where episode 1 left me a little empty. I’ve always loved the Cogman penned eps and this may be one of my favorites. He’s always known how to get you reeled in just in time to break your damn heart. This one served the purpose. Next week is going to be rough.

That’s it for me guys and gals! Am I being too rough on Dany? How did you guys and gals see it? Thanks for putting up with my perspective and please share yours below.

A Knight of the Seven Kingdoms, episode 802, Oz of Thrones, Season 8, Unsullied Recap