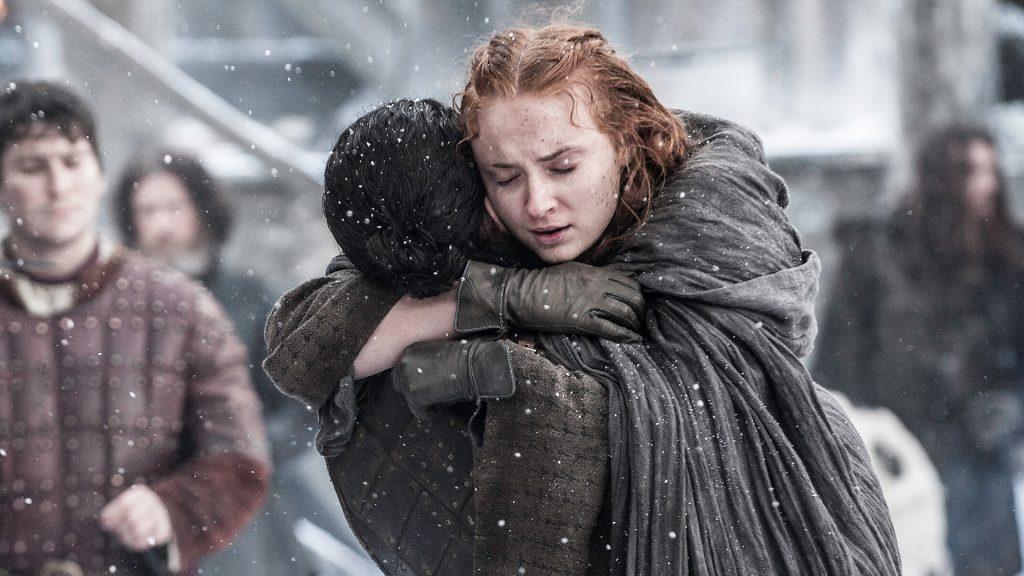 As of the end of season 6, Game of Thrones and A Song of Ice and Fire (ASOIAF) have truly gone their separate ways. Plot lines and character arcs have taken drastically different trajectories, and, as the two series continue to diverge, the points of comparison between them become more prominent, not only in terms of story but also in terms of theme and character development.

One point of comparison I find particularly interesting is Game of Thrones and ASOIAF’s contrasting approach to interpersonal relationships and, by extension, nihilism, largely because (spoiler alert) … I think the show handles it better.

**Analysis includes references to Theon’s The Winds of Winter sample chapter below. Proceed at your own discretion**

It’s already been discussed at length but one of the factors that truly sets ASOIAF and Game of Thrones apart from other works of fantasy – indeed, from other works of fiction – is its readiness to subvert expectations, to kill off main characters and let the baddies win. In many ways, both series purport an existentially nihilistic worldview: that life is meaningless and, therefore, effort is futile. Though I wouldn’t quite rank them on level with Camus’ “The Myth of Sisyphus,” both series frequently remind us that Valar Morghulis and that having the best of intentions does not guarantee success.

In such a narrative, the line between cynicism and outright pessimism is thin and (unfortunately, for the purposes of this essay) highly subjective. Nonetheless, it’s safe to say that we all have our limits; we all need the negativity tempered with some positivity to remain invested.

For me, this need manifests as a preoccupation with the interpersonal relationships between the characters, something the books and the show have chosen to handle in increasingly different ways.

On several occasions, now, Game of Thrones has opted to maintain or emphasize the unity between characters who, in the books, are, at best, isolated from one another and, at worst, antagonistic. Personally, this is one of the advantages the show has over the books because, for me, nihilism works better on a narrative level than an interpersonal one.

For example, I appreciate the irony and futility behind the War of the 5 Kings: a civil war that tears the country apart to decide who sits on an iron chair that Robert Baratheon established in book and season 1 is both figuratively and literally uncomfortable. I like how the best-laid plans of dragons and direwolves often go awry, from King Aegon “Egg” Targaryen’s policies to help the peasantry to Daenerys’ abolitionist mission in Essos to Ned Stark’s decision to offer Cersei a chance to escape Robert’s wrath. However, when such an outlook is applied repeatedly to the relationships between characters, my investment begins to slip.

Granted, many of the relational changes are products of plot divergences and, until both series are finished, there’s only so much one can analyze about incomplete character arcs. Young Griff’s omission frees Varys and Tyrion up to share a sincere and fairly uncomplicated friendship and, without Lady Stoneheart’s involvement, Brienne and Jaime are able to part ways in the Riverlands with a poignant hand wave. I look forward to comparing and contrasting these storylines with their literary counterparts one day but until season 8 airs and A Dream of Spring is released … there’s not much I have to say.

However, in cases in which the nature of the relationship has no bearing on the plot, ASOIAF’s tendency to withhold tenderness between characters feels excessive whereas the show’s added emotional beats, not only temper the pessimism (without compromising the brutality and high stakes of the narrative) and actually aid character development.

One of the earliest examples of this is Tyrion and Sansa’s spousal relationship. Structurally, the two storylines are more or less identical in the show and books. Tyrion and Sansa are married against their will, Tyrion resolves not to consummate their union until Sansa consents and then they’re separated after Joffrey’s assassination. However, their dynamic is significantly chillier in ASOIAF.

Sansa’s misery was deepening every day. Tyrion would glady have broken through her courtesy to give her what solace he might, but it was no good. No words would ever make him fair in her eyes. Or any less a Lannister. This was the wife they had given him, for all the rest of his life. And she hated him … His wife was too well-trained to say an unkind word but the revulsion in her eyes whenever she looked at his body was more than he could bear” – A Storm of Swords

In the show, by contrast, we get to see Sansa and Tyrion bonding over their shared outcast status as “the disgraced daughter and the demon monkey.” He later claims that his “wife hates [him]” after the news of the Robb and Catelyn’s deaths reaches King’s Landing, but they still share some tender moments at the Purple Wedding.

Tyrion reaches out and takes Sansa’s hand when Joffrey’s dwarfish reenactment of the War of the 5 Kings reaches Robb’s beheading and Sansa spares him the shame of crawling under the table to retrieve Joffrey’s goblet by picking it up herself and handing it to him. In A Storm of Swords, Sansa spends the wedding dinner in grief-stricken stupor and Tyrion suffers through the degrading dwarf tourney alone.

Usually, adaptations compromise the depth of the source material when they opt for the “nicer” route (please see 1995’s adaptation of The Scarlet Letter and the 1999 live-action version of Animal Farm as evidence) but, here, it’s frankly more interesting when these characters get along.

Having Tyrion and Sansa’s marriage stalemate until they’re separated develops neither of their characters. Sansa’s dreams of marrying a handsome lord or prince continue to be dashed and Tyrion’s resentment towards the world, which finally breaks him at the end of A Storm of Swords, gets more fodder but it’s nothing that isn’t communicated through other plot lines.

However, watching two such diametrically opposite characters find common ground and help each other reveals a different side to both of them, namely Sansa’s capacity to grow beyond her childhood notions of worthy men and Tyrion’s ability to successfully interact with someone outside his usual context of sex and politics.

However, both storylines reach similar climaxes, with both couples escaping into the northern wilderness, risking death in one direction and recapture in the other.

Yet, in Theon’s sample chapter from The Winds of Winter, we get very little warmth between him and Jeyne. Theon pities her and “[means] no hurt to her” and she acknowledges him as her hero while he’s carrying her through the snow but there’s little in the way of personal connection. By the time they’re captured by Stannis, Theon seems more irritated with her than anything. He silently curses her for struggling to remember Mikken’s name to prove her identity as Arya Stark and later reflects how he “hate[s] women weeping“ after listening to Jeyne cry all the way from Winterfell to Stannis’ encampment.

Granted, his annoyance is borne of desperation and exhaustion (and, yes, I realize that trauma does not make you a nicer person) but after everything they’ve been through together, for Theon to think of her with such annoyance veers into defeatist territory. What truly is the point in investing emotionally, as a reader, when these relationships amount to so little?

The show used more or less the same set up for a different purpose. While huddled under a fallen tree after running all night and wading through frigid water, Theon hugs Sansa to keep her warm and for a few seconds, both characters enjoy a respite from the horrors around them.

It demonstrates how Theon and Sansa have grown as characters. It showcases Sansa’s capacity for forgiveness, considering she refused to take his arm before her wedding, and it demonstrates Theon’s ability to care for others, to sacrifice his own welfare for someone else when he caused so much destruction for his self-aggrandizement in season 2. 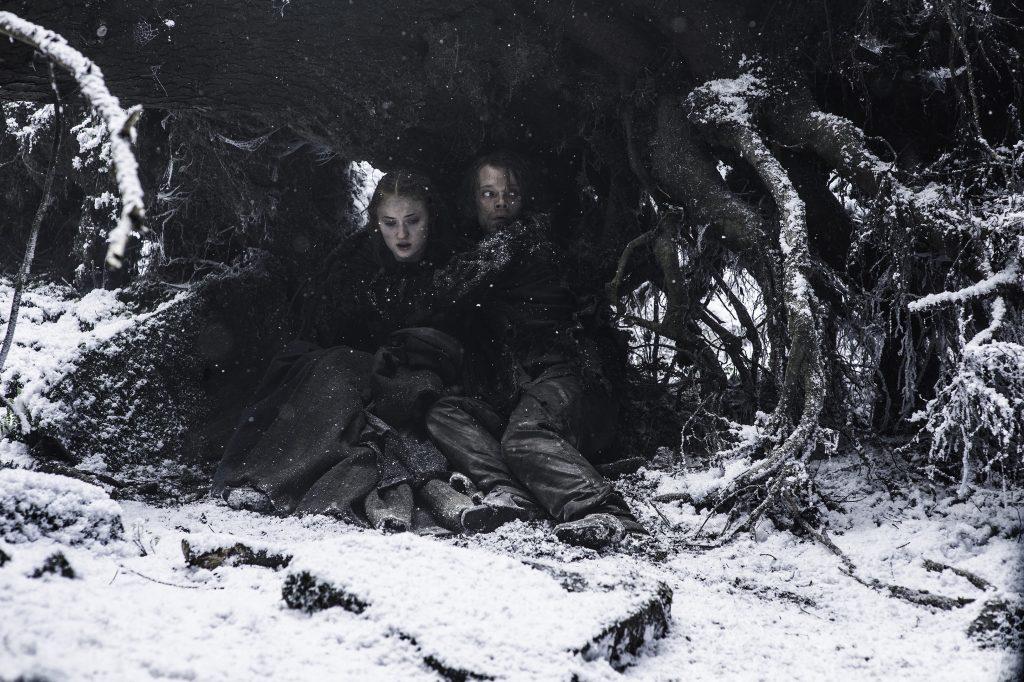 So … where does this leave us?

Comparing the books to the show is a divisive topic to say the least. Both series have their strengths and weaknesses. I suppose what it boils down to is which approach strikes the deepest chord in the individual, which represents the human reaction to adversity most meaningfully.

In some respects, the interpersonal relationships between characters have no bearing on the nihilistic outlook of either series. Westeros continues to be a treacherous world in which giving one’s life for what’s right may leave no lasting impact and even the gentlest souls must make moral compromises to survive.

In other respects, though, the relationships make all the difference in the world. Though I can understand why many prefer ASOIAF’s exploration of human brokenness and its emphasis on internal struggle, for me, seeing characters in such an unforgiving world find a way to think outside of themselves and forge sincere emotional bonds with others, however briefly, is what keeps the narrative from slipping entirely into pessimism.