You might have heard of the four-book Game of Thrones art book collection from Insight Editions and HBO, announced back in March, which aims to highlight the show’s absolutely beautiful photography, storyboards, art, and costumes. “The Storyboards” is out now (Buy Now!, etc), and “The Costumes” is coming soon, but what we bring you today is a sneak peek of Michael Kogge’s book on Helen Sloan’s iconic photography, as well as the striking cover for Jody Revenson and production designer Deborah Riley’s volume on the imaginative art created to inspire GOT’s production design. 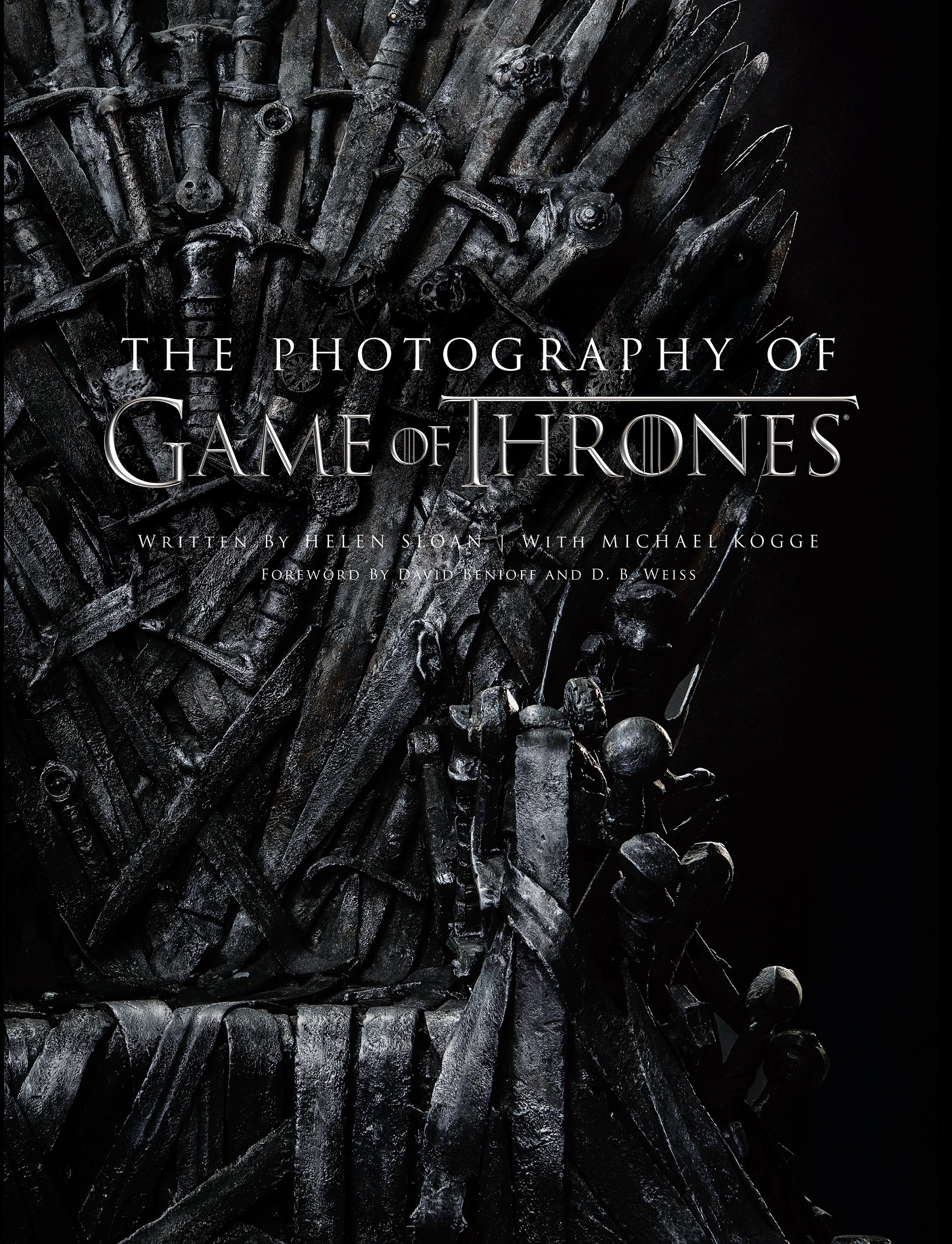 “The Photography of Game of Thrones”, written by Michael Kogge, offers you a window into the world of Westeros and Essos through the work of Helen Sloan, the principal stills photographer for the series. This deluxe, 320 page-long hardcover compendium, which will be available on November 12, 2019 for $75.00, gives fans a rare behind the scenes peek at some of their favorite characters and moments in gorgeous detail.

Here is a preview of what the tome will offer: 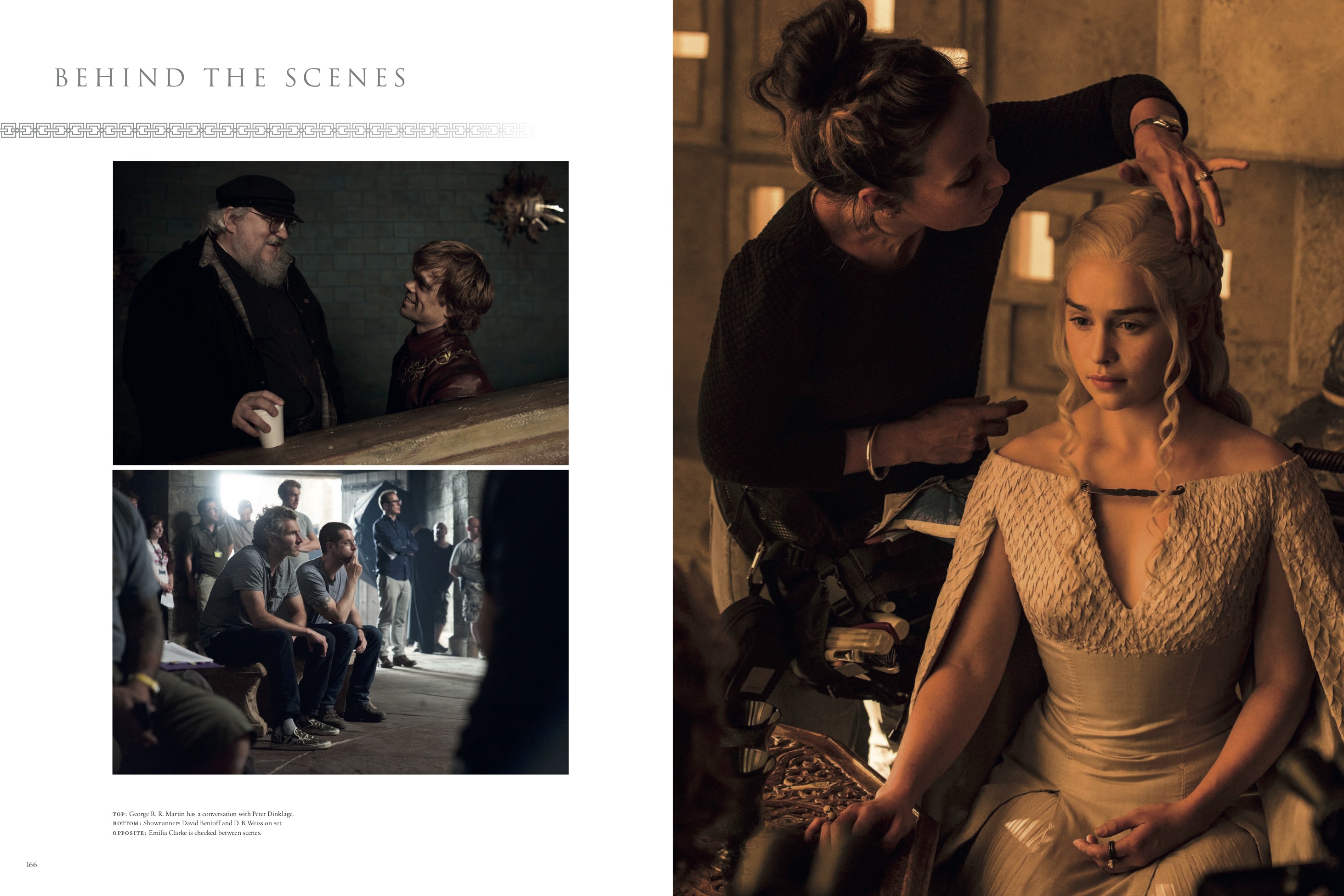 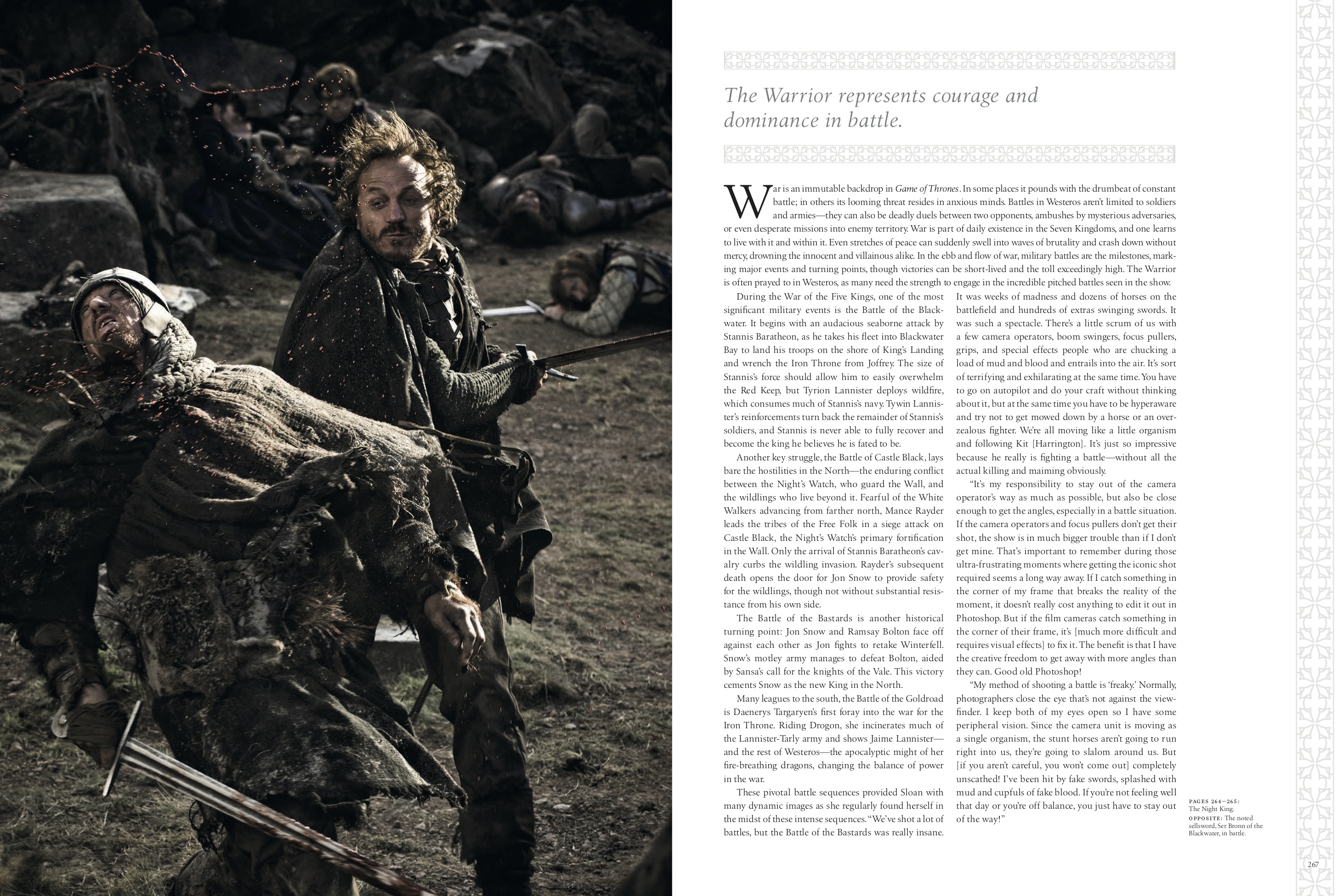 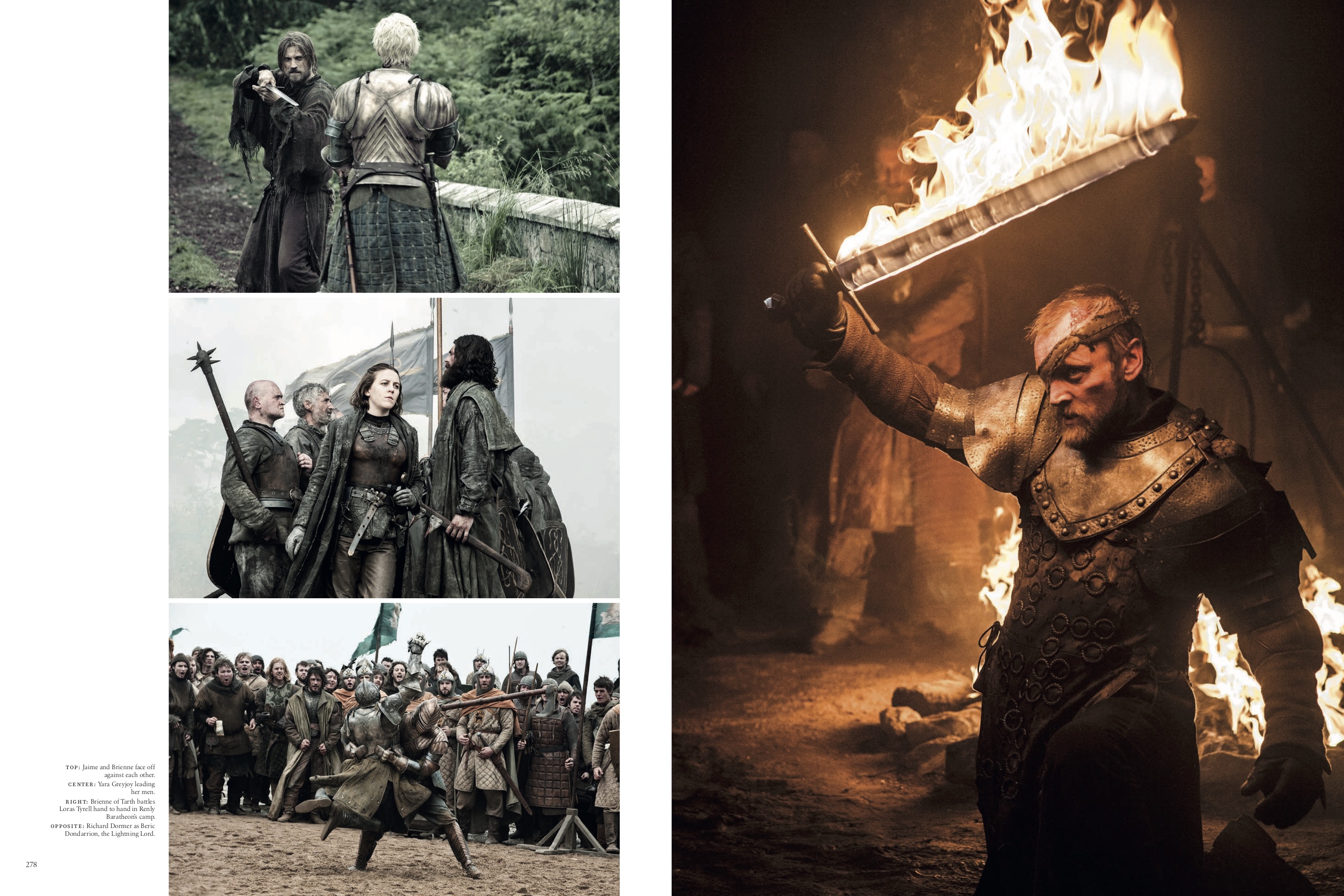 Helen Sloan has compiled the most iconic shots from the acclaimed show. The best of her collection, along with the work of the unit photography team, is featured here.

Bold and gorgeously crafted, The Photography of Game of Thrones captures in striking detail the scope and nuance of the show, celebrating a world of iconic characters, shocking moments, breathtaking locations, and much more. 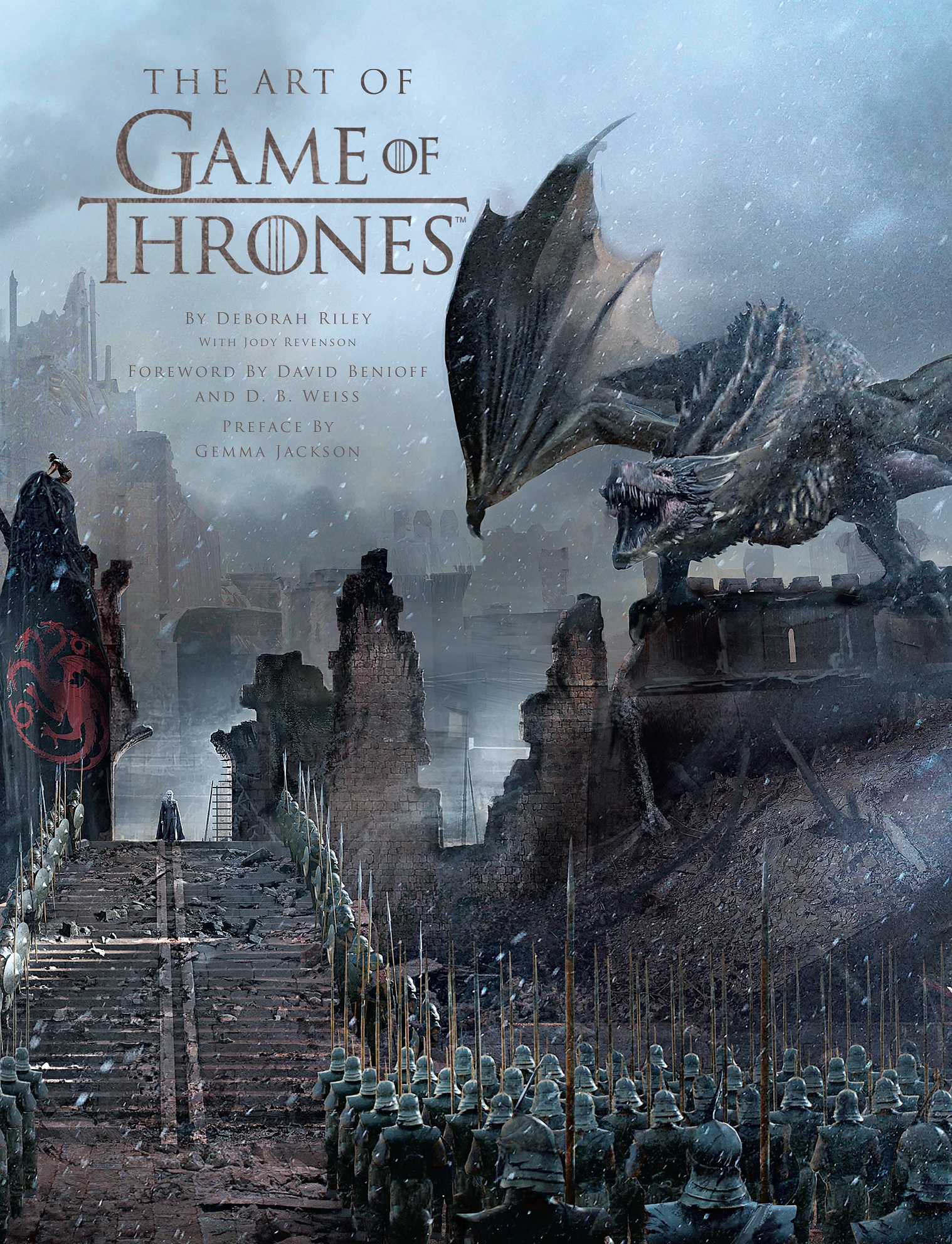 Finally, there is “The Art of Game of Thrones,” with this astounding cover featuring the concept art for the early Daenerys scene in the show’s final episode. Written by Jody Revenson and Deborah Riley, this 320-page book is filled with gorgeous illustrations and artwork, and will be available later in November 2019, for $75.00 as well.

Deborah Riley, who started working on Game of Thrones as its production designer for the fourth season, has earned four consecutive Emmy Awards, three Art Directors Guild Awards, and a BAFTA for her work on the epic, groundbreaking series. This beautifully crafted book presents a visual chronicle of the early concept stages of Riley’s team; all the meticulous work done by artists to bring the world of Westeros to life on-screen.

Fans will recognize thrilling moments and stunning locations from the show. Showcasing a multitude of fascinating and beautifully rendered images and previously unpublished works of art, this collectible book contains the visual legacy of Game of Thrones and is a must-have for fans of the show.