'House of the Dragon' filming continues in England; Tony Woodhead joins cast! | Watchers on the Wall | A Game of Thrones Community for Breaking News, Casting, and Commentary 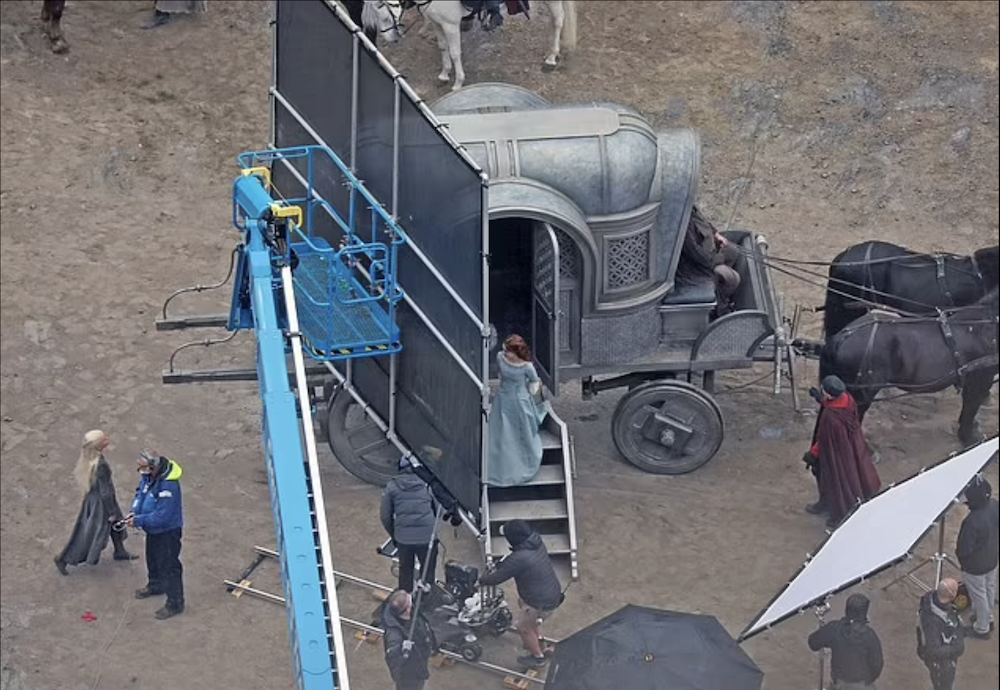 Milly Alcock, far left, seen in dragonriding gear, and Olivia Cooke, stepping out of an ornate carriage during recent filming in Derbyshire, England.

The COVID-19-related pause on production of House of the Dragon, the Targaryen-centered spinoff of Game of Thrones, is long gone — hopefully for the first and only time — as some really intriguing filming was spotted in Derbyshire, England last week.

The Daily Mail reported that Olivia Cooke, cast as Queen Alicent Hightower, and Australian actress Milly Alcock, who will take on the role of the young Princess Rhaenyra Targaryen, were spotted on set, with Alcock sporting what looks to be dragonriding gear and Cooke clad in an elegant, pale green gown (I’m guessing a not-subtle nod to “the Greens”). The two were filming several scenes together, with the article noting that in one of them, Rhaenyra had been seen “saying goodbye to a dragon on screen.” 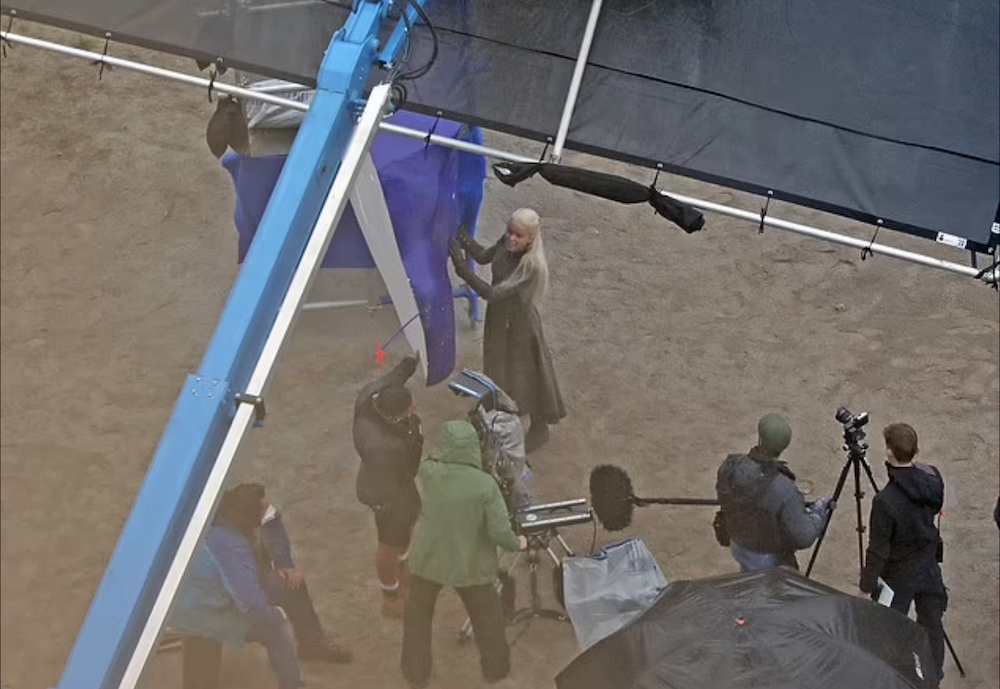 According to the Daily Mail, Alcock was seen ‘saying goodbye to a dragon’ in one of her scenes.

Also spotted — though not in any scenes with Alcock — was Emily Carey, who will portray the younger version of Alicent. This filming further supports the theory that HotD will use many flashbacks or multiple timelines in telling the story of the Dance of the Dragons, the Targaryen civil war that signaled the beginning of the end for the dragonriding dynasty (even though it would take another 130 or so years). Personally, I think it’s an excellent approach — with all of the characters passing in and out of the Dance storyline and the number of years over which it takes place, it would be difficult to show that with a cast that doesn’t really age.

In addition, Graham McTavish was seen on set in full armor and on horseback, surrounded by lots of bones — most of which were looking quite charred. And although McTavish’s role hasn’t been revealed yet, you don’t have to zoom in too closely to see the Targaryen sigils and red fringe sported by his mount. 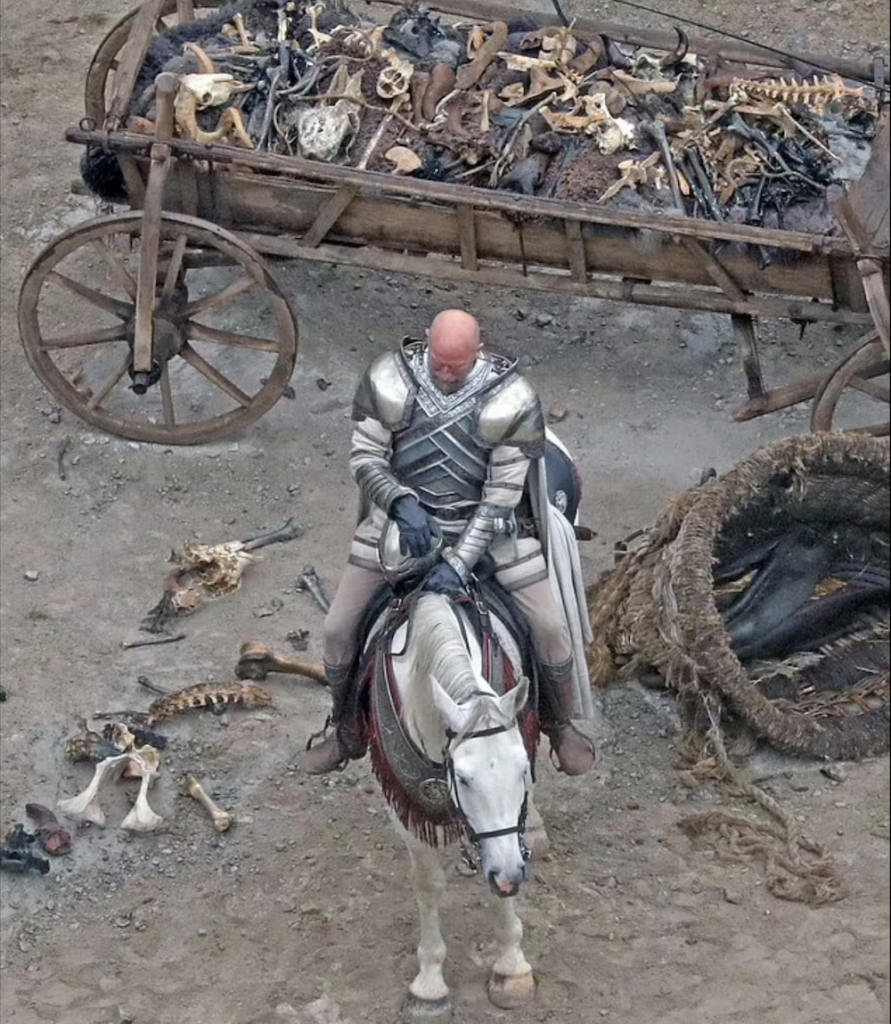 Lots of bones and a Targaryen supporter (Graham McTavish).

I’m not sure who McTavish is portraying — there’s a chance it could be Ser Steffon Darklyn, a member of the Kingsguard during the reign of King Viserys I Targaryen (Rhaenyra’s father) who escaped King’s Landing when Aegon II Targaryen (son of Viserys and Alicent Hightower) usurped the Iron Throne. Darklyn joined Rhaenyra on Dragonstone, bringing with him the crown worn by Viserys I, allowing for her coronation on the island. He also served as the first Lord Commander of her Queensguard. It’s not an insignificant role in the Dance, but if that’s the case, why continue to keep his role under wraps? Regardless, the Daily Mail article has some really interesting photos from the filming, so I highly suggest taking a look!

Lastly, it was announced that veteran actor Tony Woodhead has joined the HotD cast in the role of “Rylan Mallister.” Although House Mallister is a real one in the world of Westeros — they’re a Riverlands House sworn to House Tully — there’s no character named Rylan in any of George R.R. Martin’s writings. However, there is a “Lymond Mallister” who plays a part in Fire & Blood (Martin’s history of the Targaryens on which HotD is based). And while we’re on the topic, get a load of the Riverlands-esque, could-have-played-a-young-Brynden-Blackfish-Tully appearance of this guy:

Lymond unseats Ser Criston Cole, a key character in this whole drama, at a tournament celebrating the ascension of Viserys I Targaryen to the Iron Throne (actor Fabien Frankel has been cast as Cole). It’s the same tournament where Cole defeats Rhaenyra’s uncle, Daemon Targaryen (former Dr. Who Matt Smith), and wins the favor of the young princess, beginning a relationship (allegedly, anyway) that will become significant later as the war for the throne heats up.

Who do you think McTavish is playing? And what are your thoughts on the rest of this recent news? Let us know in the comments!