Theon Greyjoy and the Messy Road to Redemption | Watchers on the Wall | A Game of Thrones Community for Breaking News, Casting, and Commentary 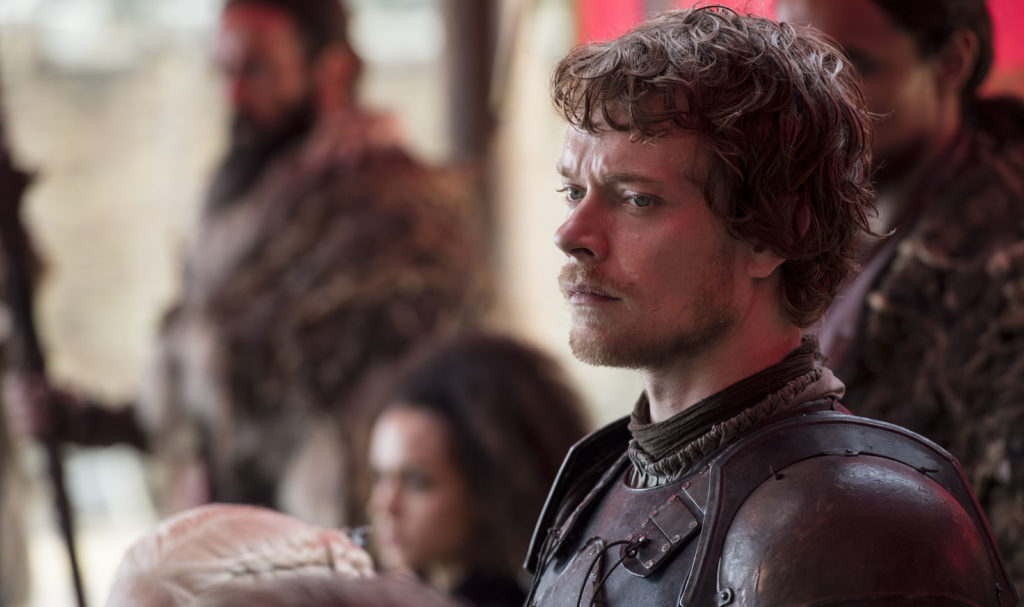 We all expected Theon Greyjoy to be dead by now, didn’t we?

After Theon’s Darth Vader moment at the end of season 5 of Game of Thrones, in which he pushed Myranda to her death and rescued Sansa, it seemed a foregone conclusion to many that Theon’s death was imminent. His redemptive arc was complete, after all. What else was there for him to do? Yet, we now stand at the precipice of the final season and Theon “Reek-no-more” Greyjoy is still alive and on his way to concluding one of the most interesting and thorough redemptive arcs in fiction. And, no, I don’t think I’m overstating things.

If Theon’s redemption did, indeed, hinge on Stark forgiveness, then, yes, Theon’s mission to rescue his Greyjoy sister would be an extraneous subplot. However, this line of reasoning betrays a limited understanding of what a true redemptive arc could – and, I’d argue, should – be.

Theon’s misdeeds did not begin with his betrayal of the Starks thus his story shouldn’t end with forgiveness for those particular crimes. There is a lot more to him to excavate. That said, making amends to the Starks needed to be a major component of his journey.

The very topic of redemption, characterized for the purposes of this essay by remorse, forgiveness and making amends, is a messy one. To the show’s great credit, it’s handled this aspect of Theon’s story with appropriate complexity. It’s one thing when a character we all want to see redeemed receives forgiveness, like Jorah Mormont. It’s another matter entirely when the character evokes the sort of wide ranging emotions that Theon Greyjoy does. 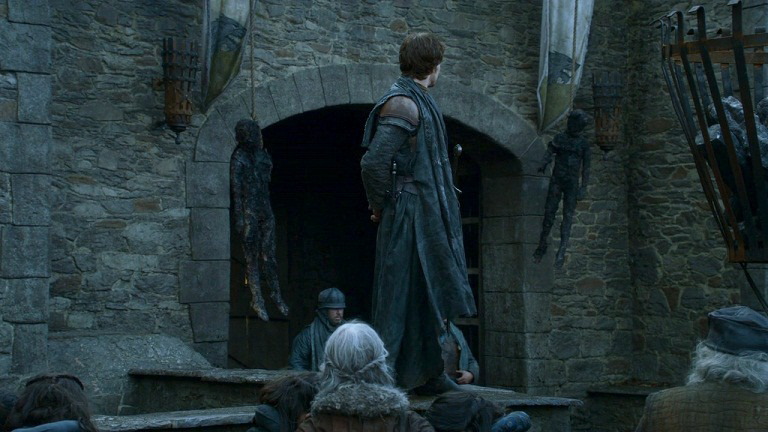 The impossibility of making amends to those whom he has wronged and, consequently, of ever truly finding closure is a significant part of Theon’s post-Reek character. Game of Thrones acknowledges that there’s no way to make up for causing irreparable damage, no way to ask forgiveness from those you’ve killed. Theon internalizes this knowledge appropriately, to a far more satisfying degree than he does in A Song of Ice and Fire, frankly.

“There is blood on my hands,” Theon tells the wildling, Rowan, in A Dance With Dragons. “But not the blood of brothers … and I’ve been punished.” This is intended to be a culminating moment for Theon but it’s always fallen flat for me. Mitigating the severity of his own crimes and claiming that he’s sufficiently paid of them feels cheap and unearned.

By contrast, in “Battle of the Bastards,” Theon tells Tyrion that he didn’t murder Bran and Rickon but admits that what he did do was “just as bad, or worse.” In “Home” he tells Sansa, “I don’t want to be forgiven,” but … of course he does. That much is apparent in the look on his face when Jon pardons him in “The Dragon and the Wolf.” Jon can’t absolve him of all of his crimes, no living person can, but what forgiveness he can offer has to be enough. Theon’s conversation with Jon effectively brings his arc with the Starks to a close yet his closure remains incomplete. It always will be.

Theon has to move on because his crimes as a turncloak cover only a portion of the deeds for which he’s seeking redemption. Lest we forget, Theon was – in Alfie Allen’s own words – a douche long before he chopped off Rodrik Cassel’s head.

Theon’s betrayal of the Starks was a culmination of deep-rooted character defects that had been calcifying since he became Ned Starks’ ward. Growing up under complicated circumstances with the Starks, Theon compensated for his unmet need for love by developing an obsession with control and a deeply toxically masculine self-image which manifested, unsurprisingly, in a need to exert sexual control over women.

In many ways, Theon’s arc follows a chiastic structure, a literary technique that follows a symmetrical pattern that was popular in epic poetry. The latter half of the story is an inverted reflection of the former. “I open at the close,” if you will. 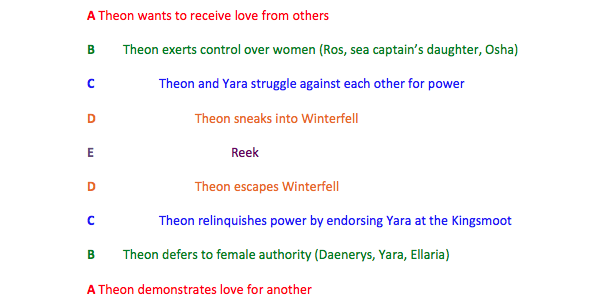 Assuming that Theon’s story in season 8 centers around Yara’s rescue without any paradigm shifting, character arc-dismantling twist, the latter half of Theon’s arc is a journey to redress the many, many wrongs he committed, beginning with the most recent and working back to the earliest. Since Theon’s crimes as the Prince of Winterfell were his last deeds before losing himself to Reek, it makes sense that his first act upon regaining some semblance of self was to begin righting those wrongs by rescuing Sansa. Yet, even after he had received Sansa’s unspoken forgiveness, his story was far from finished.

Over the course of seasons 6 and 7 we saw him confront old character defects and, this time around, master them. At the Kingsmoot, he overcame his need for control when he relinquished his claim to the salt throne, acted with integrity rather than hubris when he endured the laughter of Ironborn men and finally demonstrated a healthy sense of masculinity when he endorsed his sister as Queen of the Iron Islands.

In accordance to the chiastic structure, all that’s left to be resolved is that lingering need that’s been festering at the center of his character arc since he was eight years old: a desire for acceptance and love that he’s only ever truly found, not with a Stark or a sexual partner, but with his sister.

Yara Greyjoy is the only person who’s ever loved Theon unconditionally. She risked her life to rescue him when doing so offered her no benefit and tried to cure him of PTSD with a pep talk and ale which, given context, was the only thing she knew to do for him. Theon and Yara may have an imperfect track record together, but if true love is sticking by someone when you’ve seen them at their absolute worst, then Yara truly loves her brother.

Thus it’s fitting that the last leg of Theon’s arc focuses on Yara, that a once supremely selfish man endure a near-fatal beating and prepare to confront an uncle who dredges up his worst memories for the sake of someone he loves who loves him back.

Theon Greyjoy is a rare example of a character whose redemption arc serves more to deconstruct his psyche, rather than excuse his misdeeds. Once he’s made amends to those he’s wronged and overcome his flaws as imperfectly but as thoroughly as he can, Theon’s arc boils down to a love story between a brother and sister, two flawed people who are nonetheless prepared to die for each other. When all is said and done, a bond like that is all Theon has ever really wanted.