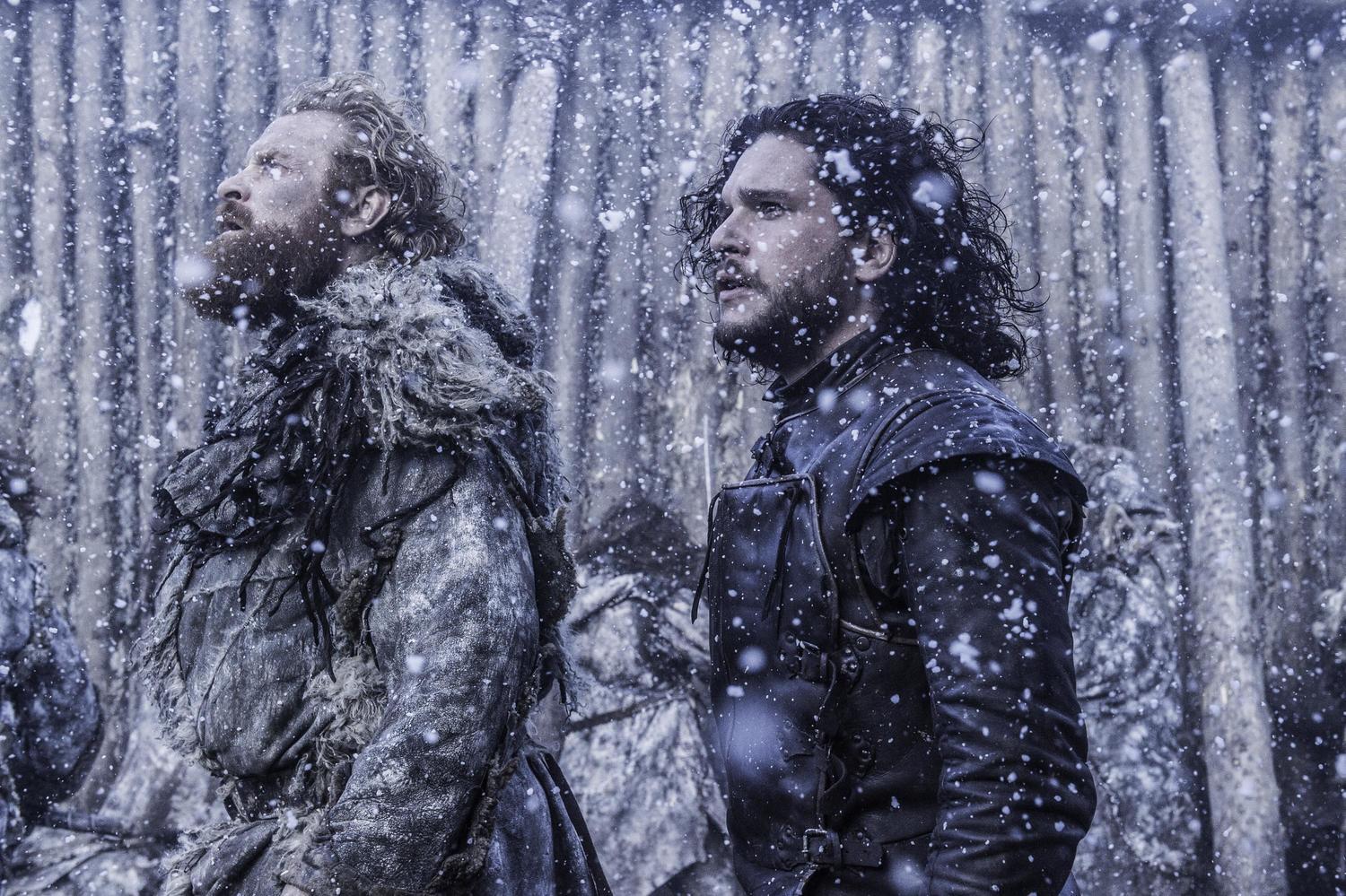 Join Watchers Geoffery (Sullied) and Nate (Partly-Unsullied) in a synchronised re-watch of episodes seven and eight, “The Gift” and “Hardhome.”  This week, we decided to pare down our discussion and focus on some key themes of the season, namely Cersei’s downfall, Arya’s progression and the White Walkers. 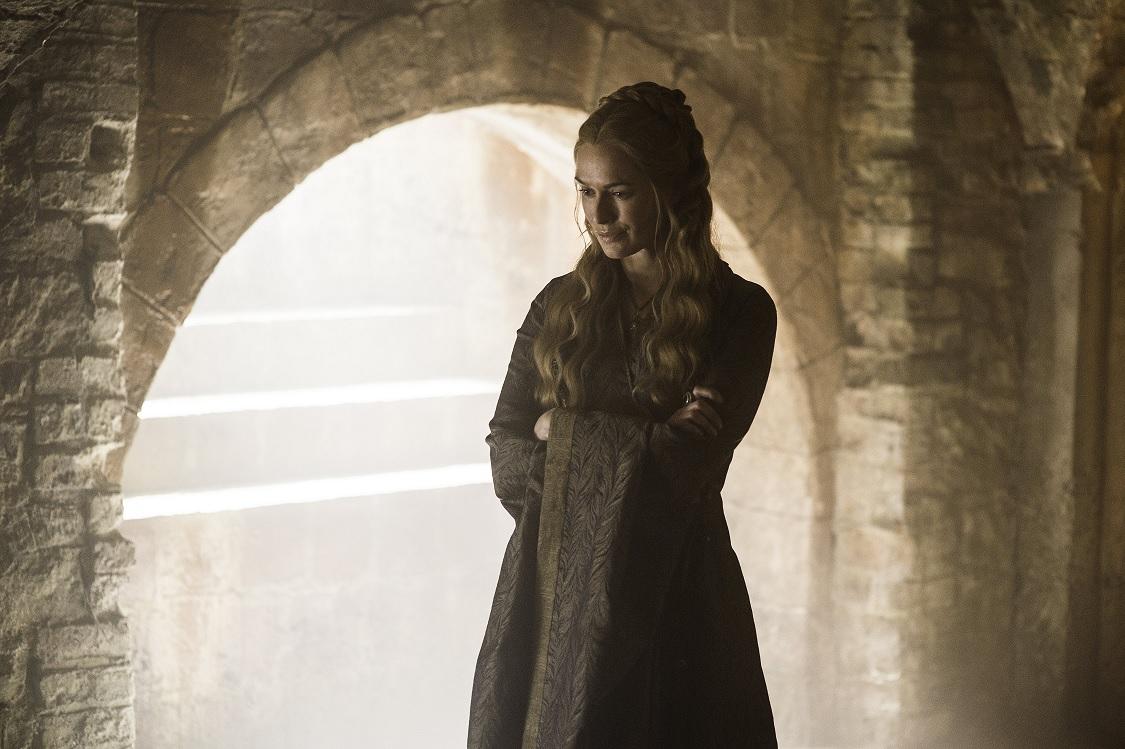 Geoffery: Definitely better than ep. 6!  I liked it a lot, especially the ending.

Geoffery: Poor Aemon.  I was so sad to see him go!

Nate: Me too, and I really liked the emphasis on his Targaryen heritage, since I’m partly-Unsullied, I thought he was saying “Aeg.” [Editor’s note: Good ear! “Egg” is short for “Aegon,” Aemon’s little brother who became king. -Sue]

Geoffery: Really great nod to the books.  I love it when the show keeps in stuff like that, references to character’s lineages, etc.

Nate: That was the consensus I saw on Twitter. 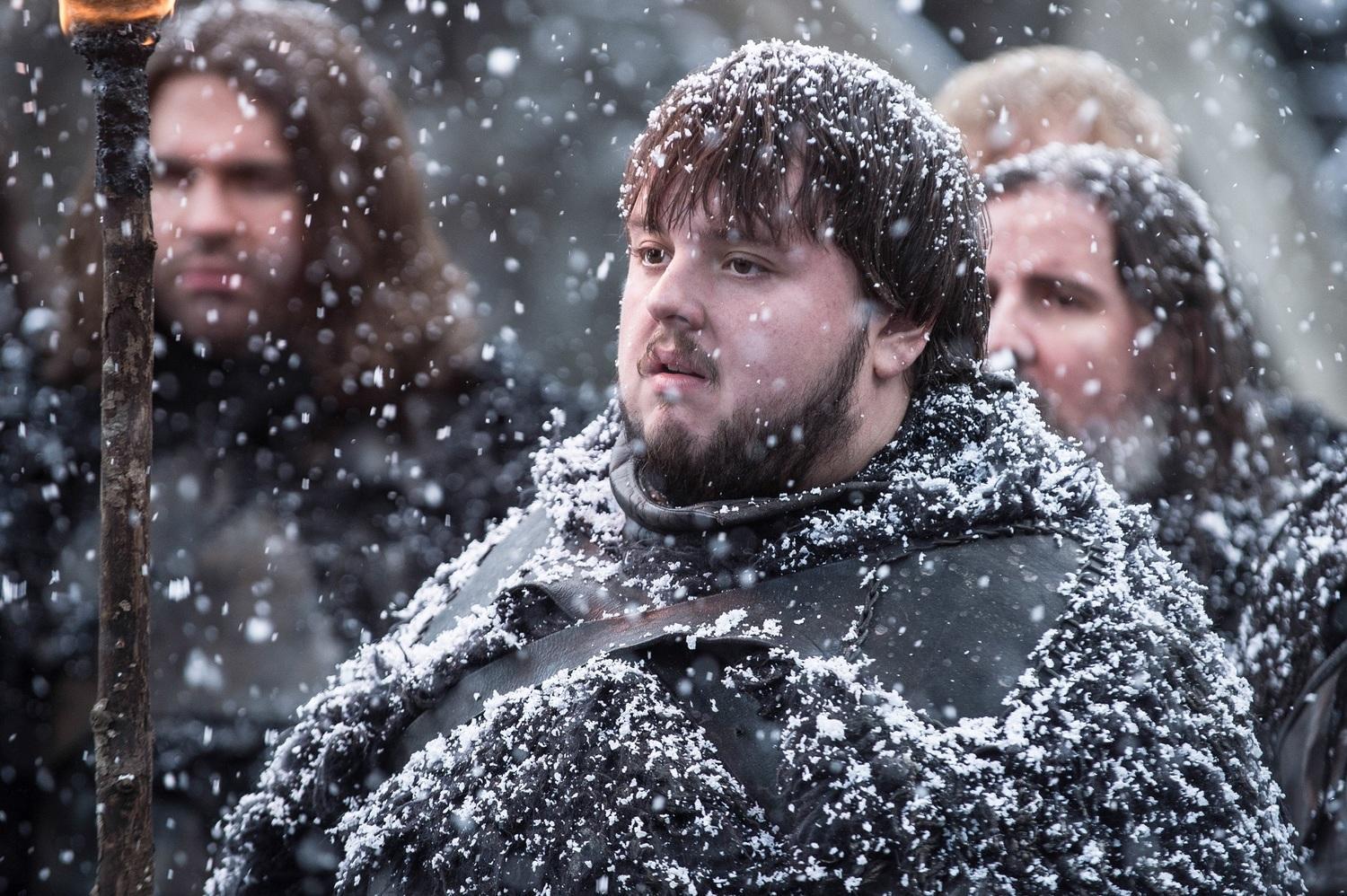 Nate. Now that I see that again, they didn’t use any dragonglass at Hardhome?

Geoffery: I don’t think so, because they left it in the hut when the wights attacked. There was a bit when Jon wanted to go back and get it, and then they were like, fuck the dragonglass, let’s leg it!

But more on dragonglass later! Meanwhile, in King’s Landing… 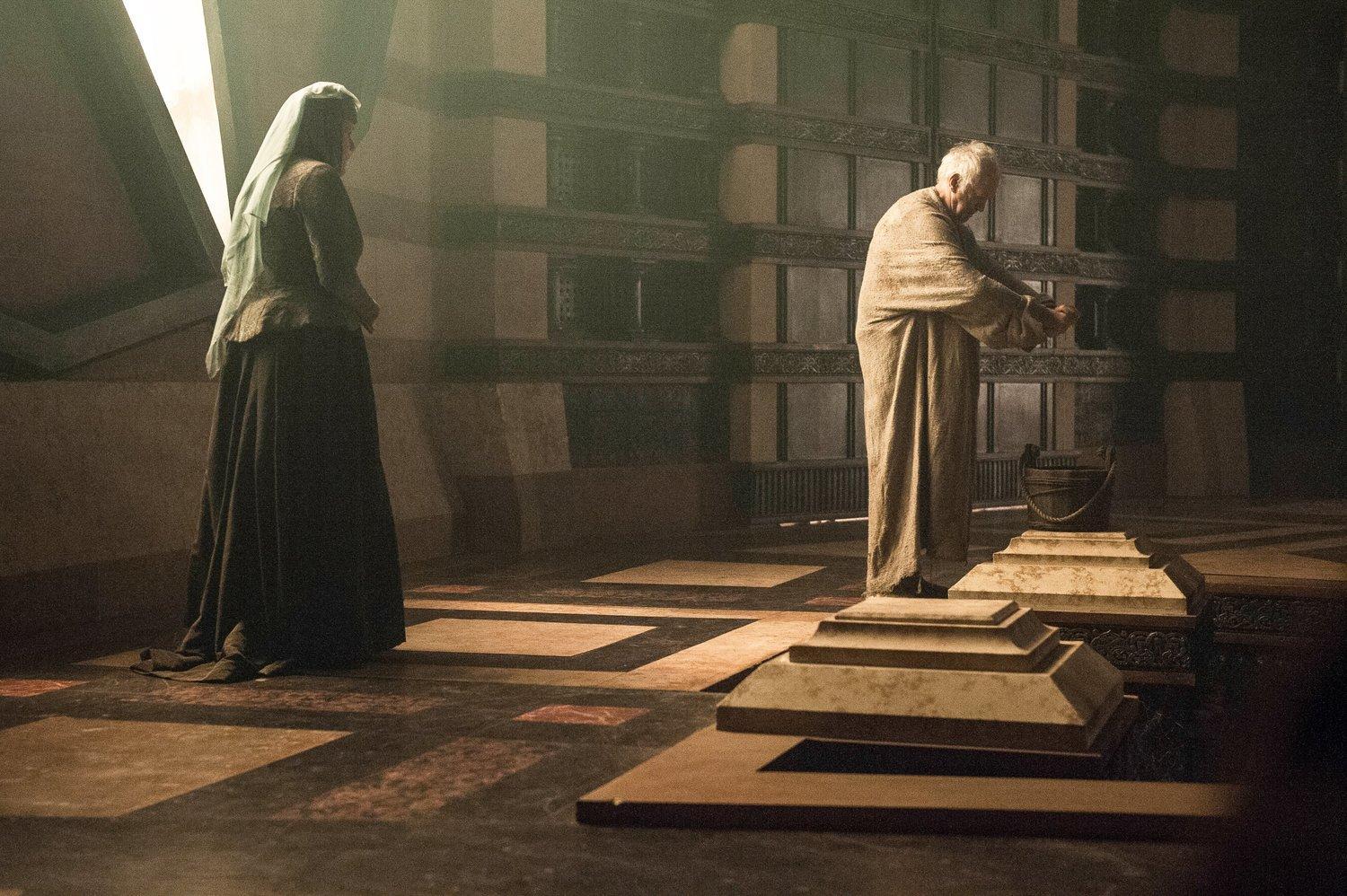 Nate: I loved this scene with the High Sparrow and Olenna because it does make her look a bit pompous. I love her but let’s not forget she’s still one of the many flawed highborn playing this Game of Thrones. Let’s not forget who put the poison in Joffrey’s drink! That being said, is the High Sparrow really seeking justice? Or does he have some sort of ulterior motive?

Geoffery: Lady Olenna is playing the Game but is the High Sparrow?  I think he probably enjoys being in a position of power even if he’s supposed to be pious and poverty-stricken.

Nate: Well it would give him a certain illusion of being absolved, but who would he be trying to further, then?

Geoffery: There are some weird theories about him out there.  Like that he’s

Varys in disguise or his hair is concealing a glamour or that he’s actually Howland Reed.

Nate: That would be quite a twist.  But maybe he’s mysterious because he’s genuine? If he really is a man of the people then he would hate the Lannisters. Like when the mob attacked Joffrey, and called Tommen an abomination when he was at the Sept. So maybe he just got fed up with all the corruption and played the shit out of Cersei.

Geoffery: Like he allowed Cersei to raise him up so he could crush her.

Nate: Exactly! He knew what he was doing

Geoffery: This Cersei scene, I spent all of it going, “Oh my god, oh my god,” under my breath ’cause I knew what was about to happen!

Nate: I was so immersed this episode, I loved it! “Look at me…look at my face….it’s the last thing you’ll see before you die!”

Nate: Definitely one of the best this season, I’m not sure what my all time favorite. I really hope Cersei’s story ends at somewhat of a conclusion for her trial. I don’t want to wait until next season to see what happens to her. 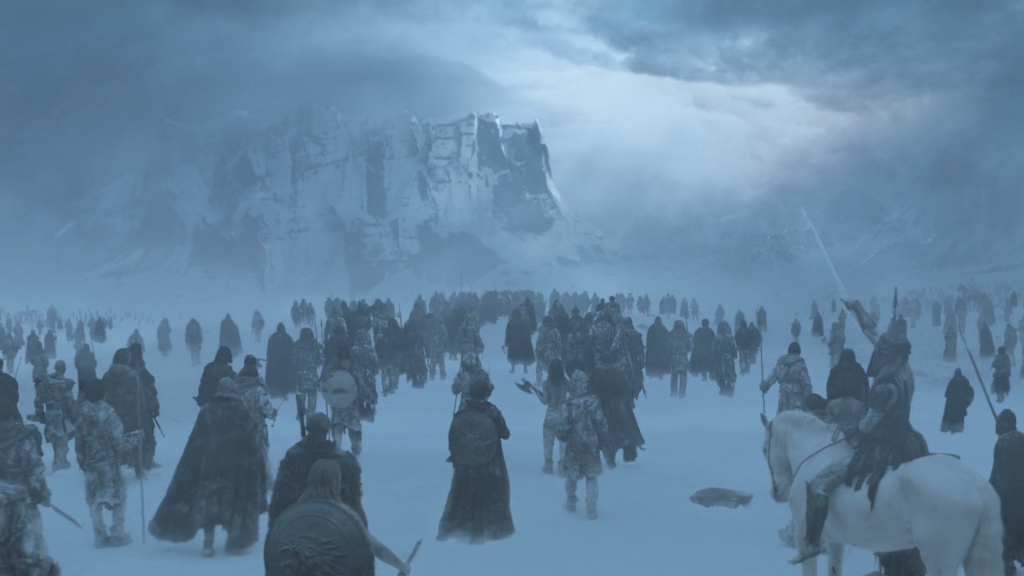 Nate: Before we go in, I absolutely loved the episode. I wasn’t expecting White Walkers at all. A chilling twist to the end.

Geoffery: Me too! Best one of the season!

Nate: I just read an article about how the show is a lot better about making the White Walkers a constant threat rather than the books which they aren’t in as much. I found it pretty interesting.

Geoffery: It’s kind of true, in the books they’re in the background and you tend to forget about them in lieu of the actual Iron Throne-sy conflict, but in the show they’re in your face causing havoc.

Nate: Good enough for me. I think they’re a great addition!

Geoffery: Winter is the main threat after all and the White Walkers embody Winter. Doesn’t really matter who wins the Throne in the end if Winter’s gonna destroy everyone. Didn’t Dany see a wintery throne room when she visits the House of the Undying? Foreshadowing! 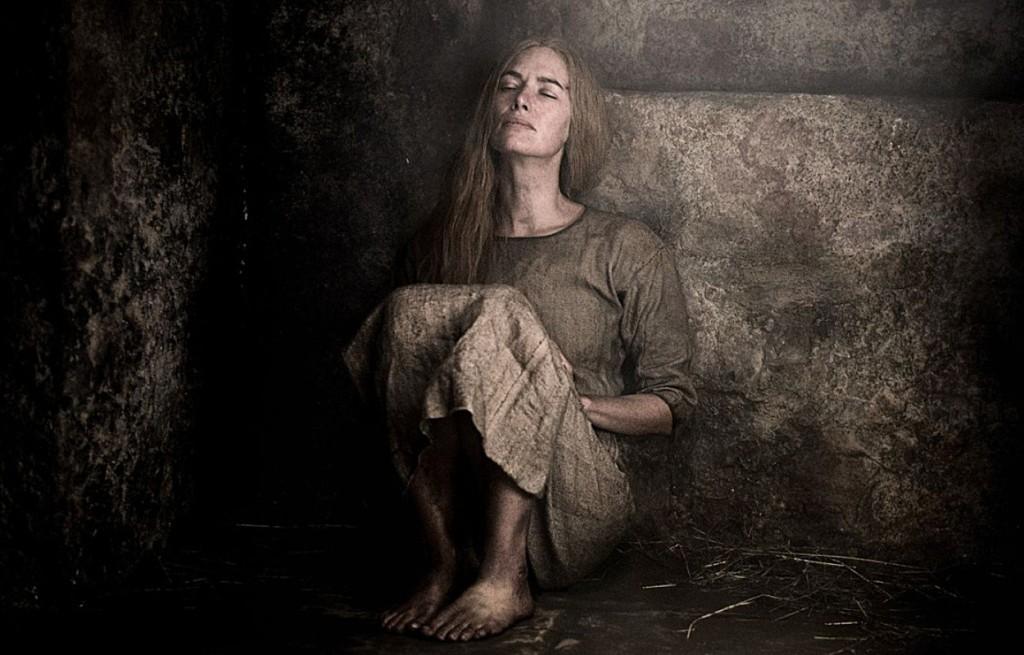 Nate: I absolutely loved that Cersei scene, small as it was. It was still very solid.

Geoffery: It’s so great to see Cersei like that.  We’ve had five seasons of her in power, manipulating but also kind of being out of control and now it’s all coming to a head.

Nate: And she can’t handle it. She’s rather manic in the way she swaps back and forth between desperation and rage.

Geoffery: Well this is it, she’s never had any real control and now she’s not even in a position where she can do anything to help herself.

Nate: Except completely disgrace herself and lose everything she’s worked, or I should say manipulated for.

Before the chilling chaos at Hardhome, we drop in on Braavos.

Nate: And before all the craziness of Hardhome, what are your thoughts on Arya so far? 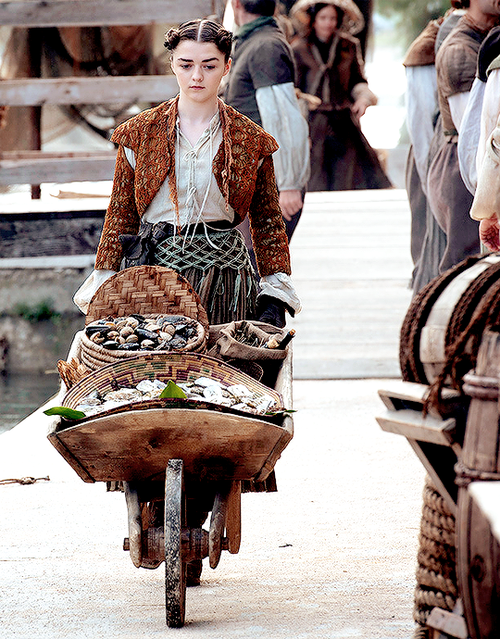 Geoffery: I know some people think her storylines have been boring or slow this season, but I’m enjoying them! Great to have her shout her, “Cockles, muscles and clams,” line like in the books. I don’t know what people expected, that she’d be stabbing guys every other week? I like the way it’s going.

Nate: I do too! I think it brings a freshness to Season 5. She’s been rather stagnant since she left King’s Landing by having to stay in hiding but now she’s a bit more distant and free and she’s progressing towards getting that list finished which is exactly what she wants and makes sense since she’s in the Free City.

Geoffery: It’s just nice to see a character learning and progressing in a way that she wants!

Nate: Exactly! Plus, it’s pretty much a given that

she’s gonna stab Trant before this season ends so they’ll get what they want! Patience, people!

And as Winter finally arrives, we return to Hardhome:

Nate: Back to Hardhome! That wall of frost! My brother was immediately like, “WHAT? WHITE WALKERS!” I scoffed at him like there’s no way they’re just gonna have White Walkers show up…and then I ate my words. I think they sort of did it that way, though! It was so unexpected and then suddenly, bam! A huge army of wights.

Geoffery:  It was amazing! I’ve been saying all season they’ve been playing it too safe in terms of original material (like having Brienne just sort of hang around outside Winterfell) and then SUDDENLY A LITERAL TON OF WIGHTS! If you’re gonna have a big fucking made-up battle, that’s the way to do it!

Nate: Exactly! I mean, why not? It goes back to what we said before, we need that reminder that they’re a real threat. It was so epic, I loved every minute.

Geoffery: And I’m glad they included Wun Wun the Giant!

Nate: Me too! “The fuck you looking at?” And he kicked ass.

Geoffery:  I’m so glad Dolorous Edd didn’t cop it like some people predicted he would. 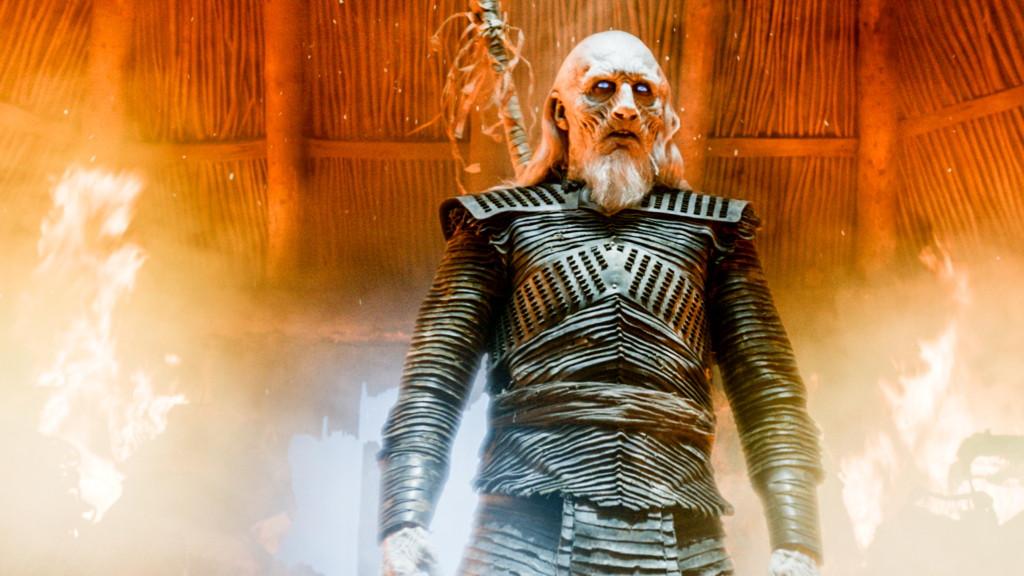 Nate: The White Walker was a nice contrast of ice/fire. I really do love when they do things like that. It’s a nice homage to the title of the series.  (Another example I liked was burning Aemon while it snowed.)

This was definitely one of Jon’s better fights.

Geoffery: Yes I love it when Jon has a chance to cut loose. Also, Valyrian Steel!

Nate: YES! I really loved the look on the White Walker’s face! Nice shared surprise between the two. 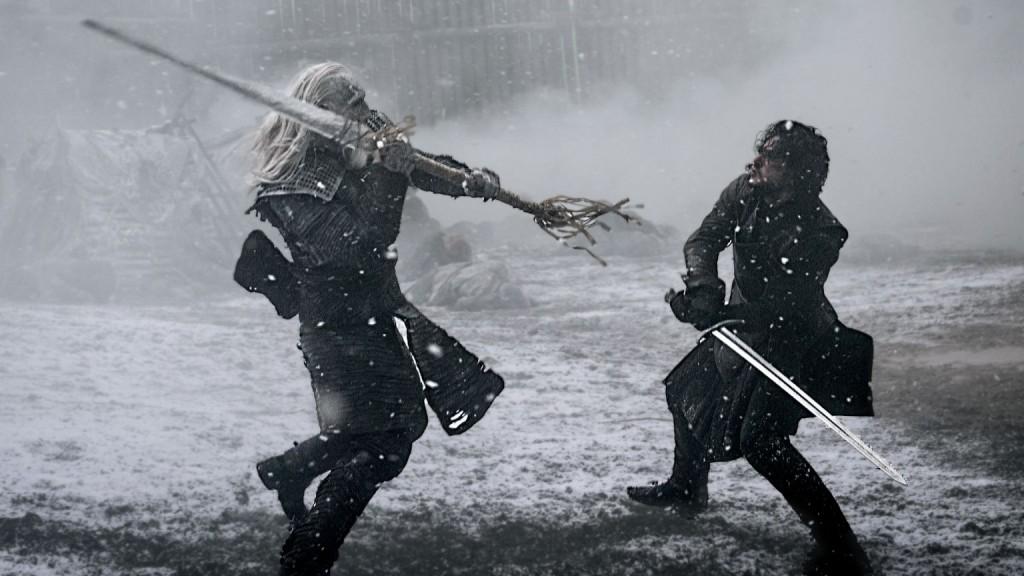 Geoffery:  The steel is going to become important next series, I think.

Nate: Oh yeah, definitely! Which means those who have Valyrian blades are going to need to hold onto them! But also, in the spirit of ice and fire, if dragonglass affects the Walkers, I think it’s pretty safe to say that dragon fire would too, so Dany, help the brothers out!

Geoffery: Yeah, get on it, Dany! Do you know who has all the Valyrian steel swords, by the way?

Nate: I think so. Most of them, at least. Brienne, Tommen, Jon, right? Brienne and Tommen have both halves of Ice.

Geoffery: There are others.

Geoffery: Tyrion’s dagger was, yes. I’m just saying, no spoilers obviously, but I think the show might go further into plots involving the other swords now that they’ve shown onscreen that they can kill White Walkers.

Nate: Next season will probably be rather White Walker-heavy though, given it’s based on Winds of Winter so hopefully we’ll get some history on who exactly they were. I know it’s pretty certain who the leader with the ice crown was but the bearded one Jon killed? And the one we’ve seen leading the pack?

And will we ever find out what happened to Benjen Stark?!

Geoffery: Ah, the Benjen Stark theories. I personally wish the show had kept in Coldhands.

Nate: Yes! That’s the consensus I’ve seen via social media. But since I don’t know who that is, it’s lost on me.

Coldhands popped up in Bran and Samwell’s storylines in the books, but he’s cut from the show. And he’s NOT Benjen Stark, GRRM made a statement. But he still didn’t say who Benjen Stark was, just who he wasn’t, so let your imagination run riot.

Nate: Yeah, I saw an article that questioned whether or not the Walkers are even “evil” or not because it’s not really clear that they are. I don’t know, I thought it was pretty clear that they’re all about Winter and death.

Geoffery: They’re more of an elemental force than emotional or evil, in my interpretation.

Nate: Yeah, I can see that. Unless the Night’s King does have some motive. Maybe a vendetta against The Watch? I smell another flashback!

And we’ll leave that question for the readers! What did you think of The Gift and Hardhome? Let us know in the comments below!