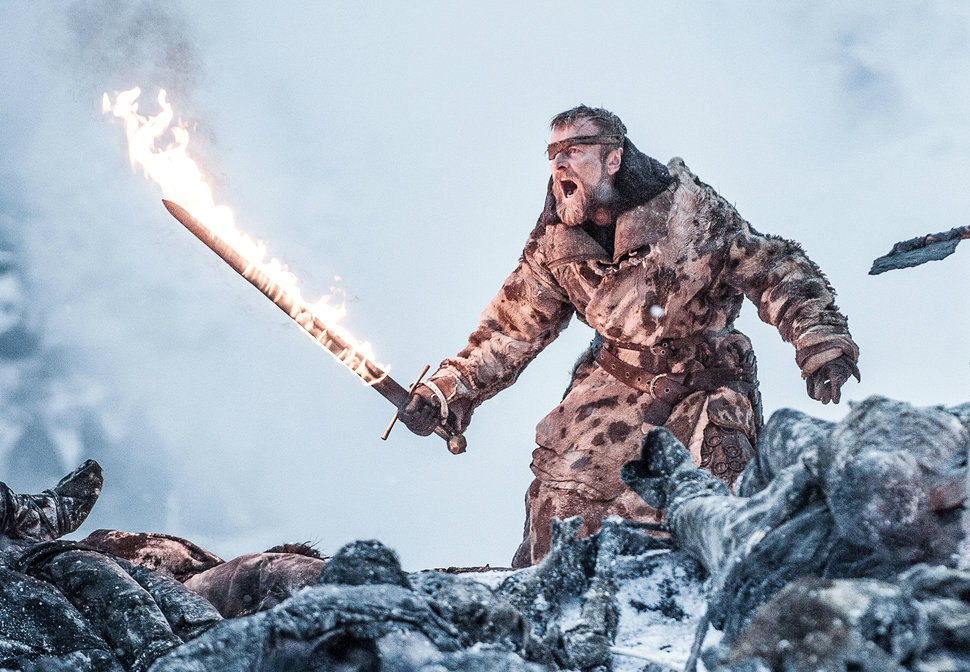 In one of his first post-Game of Thrones season 7 interviews, Richard Dormer chatted about his grisly body of work and the strenuous process of filming those spectacular sequences from “Beyond the Wall.”

Dormer recently interviewed with The Guardian to promote his new BBC drama, Rellik, in which he plays a cop disfigured from an acid attack. Dormer conceded that he tends to play pretty damaged characters.

“It’s true! Dan [from Fortitude] is destroyed, Terri [from Good Vibrations] had problems, and every time Beric dies he loses a part of himself so he’s constantly mourning the human he used to be …”

Dormer went on to discuss the arduous five month long process of filming “Beyond the Wall.” Dormer noted, with perhaps a little annoyance, how quickly scenes that were physically and emotionally taxing to film go by on screen.

“The fight sequence took five weeks to film and lasts five minutes,” he said. “Just climbing on the dragon took maybe a month – and on screen it’s an eye-blink.”

Dormer didn’t exactly mince words about what filming the “magnificent seven” scenes was like (though, for the record, he did mention that the lovely cast and crew kept the experience from being completely intolerable).

“It’s not nice being soaking wet and very hot and yet very cold at the same time and trudging up and down the most beautiful glaciers in the world – but not even being able to look because you feel so tired.”

All that said, there were some fun moments on set. Though Dormer failed to mention guitar sing alongs, he did say that the cast spent a lot of their down time playing Risk.

“There were a lot of arguments, mainly because Iain Glen is so competitive,” Dormer said. “He would just sit there going ‘Noooo why? Why are you all attacking me?’” According to Dormer, by the way, Kit Harington was easily the best Risk player of the group.

And then, of course, there’s Beric’s wonderful flaming sword, which was slightly tougher to wield in reality than on screen.

“Because Beric only has one eye, I’d be temporarily blind and swinging the flaming sword – which is real, not CGI,” he said. “Every time I hit them they’d go whumpf and guys would charge in with extinguishers.”

Still, Dormer can’t complain: “Let’s face it, I have the coolest weapon on the show. It’s better than a lightsaber.”

Beyond the Wall, episode 706, Richard Dormer