Stephen Colbert tries to pry spoilers from Kit Harington on The Late Show | Watchers on the Wall | A Game of Thrones Community for Breaking News, Casting, and Commentary 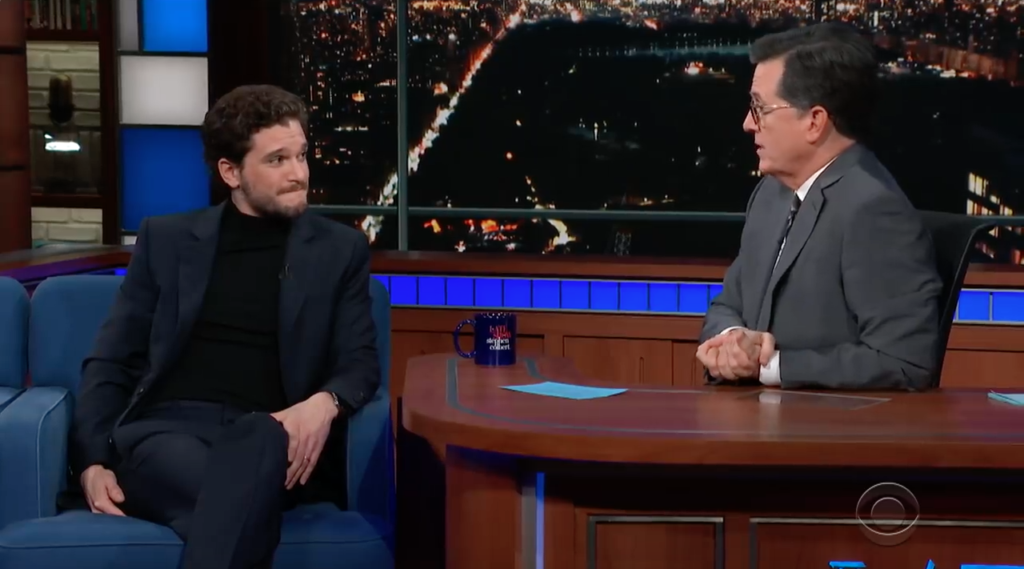 Kit Harington recently appeared on The Late Show with Stephen Colbert and … well, an interview between late night’s biggest Tolkien fan and a Game of Thrones star was never not going to be entertaining, was it?

Over the course of their twelve-minute conversation, Stephen Colbert repeatedly tried to squeeze details about the final season out of Harington, to no avail. So, instead, Colbert spitballed potential endings for Game of Thrones while Harington had to stare into the camera and maintain a neutral expression.

“Please do nothing with your face,” Colbert implored him before “predicting” that the series ends with Jon fathering a son whom he names Tony Stark.

Harington offered nothing in the way of plot details during the interview, but he did discuss some aspects of production for season 8 and … boy, his burnout is palpable.

In response to a question about his costume, Harington said that every year more weight was added to it “just because A) the costume designer, Michele [Clapton] hates actors, obviously, and I think they just wanted to physically tire us out by the end so we never ever wanted to do the show again.”

Later in the interview, Harington talked about the grueling 55 nights the cast and crew spent filming a battle (which Colbert gleefully deduced takes place at night).

“You really realize that humans are not nocturnal creatures when you put a crew through 55 night shoots,” he said. “David and Dan just kind of swung up every once week and the poison in everyone’s eyes … like, ‘You’re not going through this, man.’ It was serious. It was a lot to ask but I think it will be definitely worth it.”

It wasn’t all negativity, though. Harington reflected fondly on the decade that has elapsed since he won the role of Jon Snow, how he has changed as a person and how the world has changed.

“It’s extraordinary,” he said. “After 10 years of it I’m still pinching myself and I still can’t quite grasp it.”