Game of Thrones: Post-Mortem of "Blood of My Blood" | Watchers on the Wall | A Game of Thrones Community for Breaking News, Casting, and Commentary 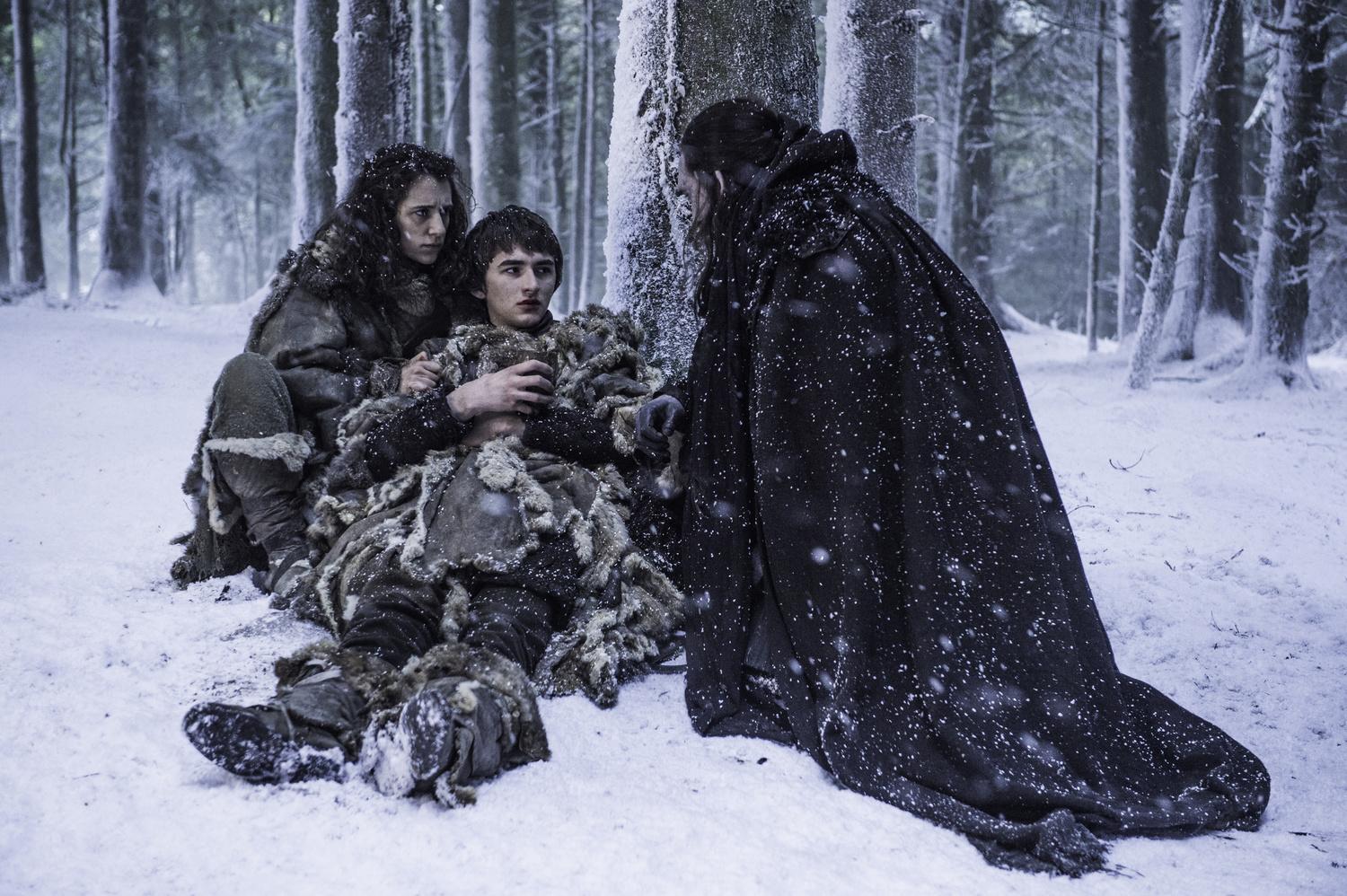 In last night’s episode of Game of Thrones, we saw the return of several characters, and Arya reach a turning point in her stay in Braavos.  It was full of revelations that had show-watchers and book-readers alike wide-eyed. Let’s dissect the episode a bit more with today’s batch of new interviews, giving us a closer look at “Blood of My Blood” and all that title implies.

The show is so sprawling and there are so many threads, but – at it’s heart – it’s largely about this good family that was torn apart. So seeing some of them connect again (Jon and Sansa; Benjen and Bran) was very satisfying to write and to shoot. And it was great to have [actor] Joe Mawle back with us – it must have been a trip for him to step back into the character after so long – but he’s also decidedly not the Benjen of season 1. So that was fun to explore.

That was a lot of fun because Sam might not have a lot of screen time this season, but he’s got this big meaty chunk trying to pass off Little Sam as his own bastard son. And as much as Sam has gone through, I love exploring those family dynamics. His mother and sister and brother are all fundamentally decent people but his father is just a cold hearted bastard when it comes to his distant son. There’s a painful part of the scene where his father just unloads on him and tells him every hateful thing he ever thought about him and Sam can’t defend himself. We found that fascinating – Sam has killed a man, he’s killed a White Walker, he’s emerged as such a great hero, but he still can’t stand up do his dad.

The play scene in Braavos displayed a lot of self-awareness about how Game of Thrones is perceived and it seems like the writer had fun with that. Cogman tells EW:

I come from theater and being able to comment on the show and the reactions to the show through the players were so much fun. The show is often accused of being gratuitous in all kinds of way – the violence and the bigness of the characters. It’s a huge operatic story. We’re able to lovingly spoof ourselves but also play with ideas about how audiences view the show, good and bad, and how a perspective of a story changes.

Cogman says a whole lot more about this week and also last week’s epic climax with Hodor and Summer, so check out the complete article at Entertainment Weekly! 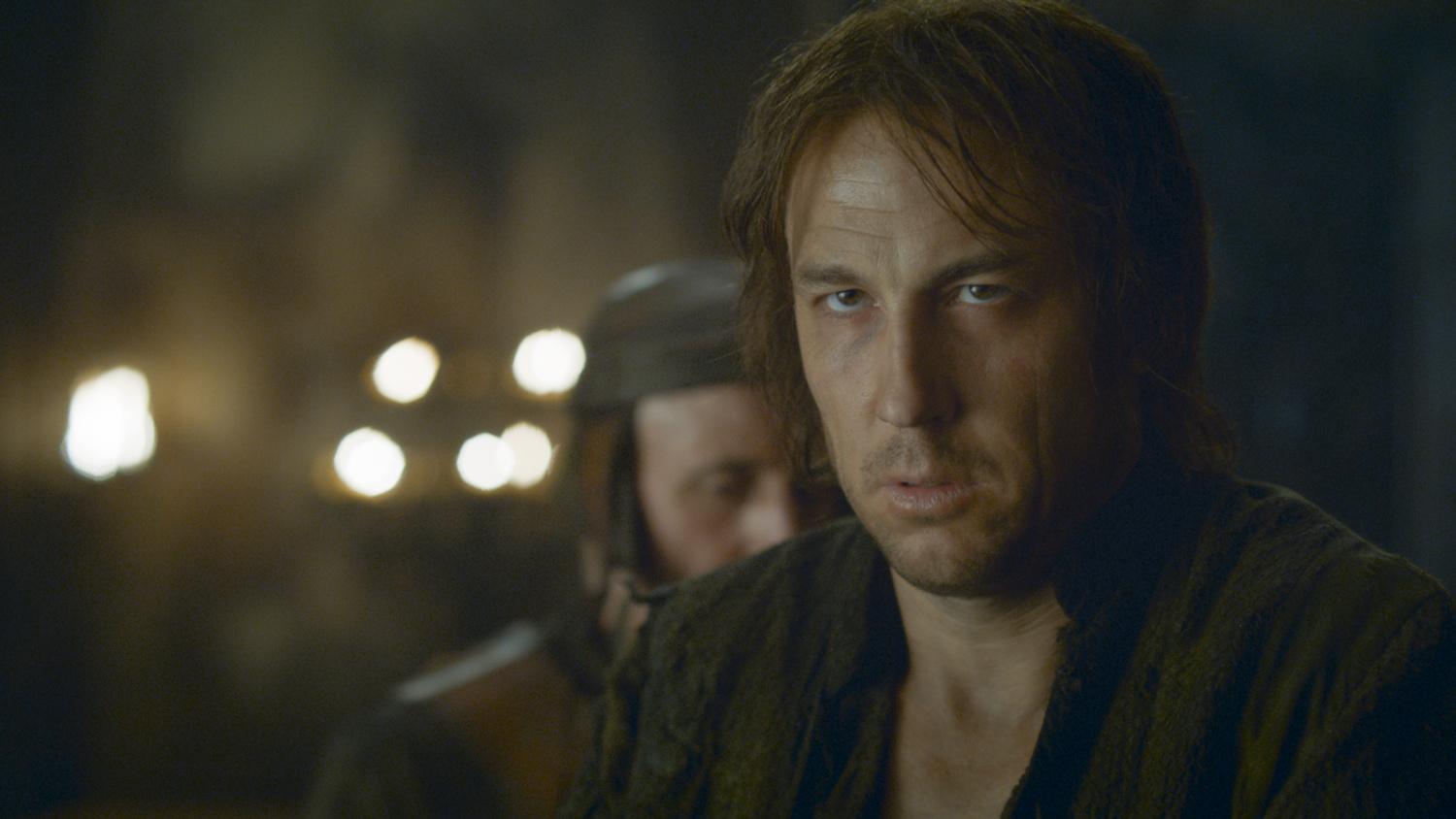 EW also checks in with Tobias Menzies who has been AWOL from Game of Thrones since the Red Wedding in season 3. Menzies says it was a “nice surprise” to hear from the show and admits, “I’m not sure [the producers] knew themselves” whether or not Edmure Tully would ever return.

I think they’ve sort of found their way and chose what bits of the book they are doing. They just got in contact a little bit before we shot to see whether I was available, whether they could fit me in. It was a question of fitting in amongst my other commitments. But I’m a big fan of the show and was keen to make it work if I could.

Teasing his upcoming storyline, Menzies says, “[Edmure] becomes a pawn in a large political fight. He ends up having to make a very difficult decision over whether to betray his family.”

Maisie Williams talks to MakingGameofThrones this week about Arya’s change of heart in “Blood of My Blood.”

She sees how Bianca reacts to Lady Crane’s talent. Arya’s seen a lot of backstabbing and snakey-ness, and now it’s happening right in front of her, and she has the power to do something about it. Lady Crane is such a warm soul, which Arya hasn’t come across in a really long time. When Arya sees someone so selfish like Bianca, it’s something that really doesn’t sit well with her. I think that’s the moment when she thinks: I’m not going to do this. I’m going to take it upon myself to put things right.

As for the risk Arya is putting herself in by making that decision, Williams says:

I think Arya’s almost forgotten about the House of Black and White in that moment. She gets involved with people very easily. She gets so drawn into personalities. That’s just something that’s in her blood. You know, the Starks trust far too many people. Jaqen makes it very clear that, if she messes up, that’s it. I think Arya never lets herself dwell on anything, so she doesn’t take it as seriously as she should.

David Benioff and D.B. Weiss look back at “Blood of My Blood” in the new edition of Inside the Episode, including the mysterious return of Benjen Stark, how Bran is now the Three-Eyed Raven, the play and Arya’s decision to leave, and Daenerys’ final scene, a mirror to Khal Drogo’s season 1 Dothraki speech.

John Bradley and Hannah Murray discuss Sam and Gilly’s visit to Horn Hill, how Randyll compares to dealing with Craster and White Walkers, and Sam’s mindset in dealing with his father.

Taking a look at the sept confrontation, Nikolaj Coster-Waldau discusses dealing with a fanatic like the High Sparrow, and Jonathan Pryce shares his insight into the crafty sparrow.