Game of Thrones production designer Riley, EP Caulfield explain delayed Season 8, claim "it will never get better than this" | Watchers on the Wall | A Game of Thrones Community for Breaking News, Casting, and Commentary 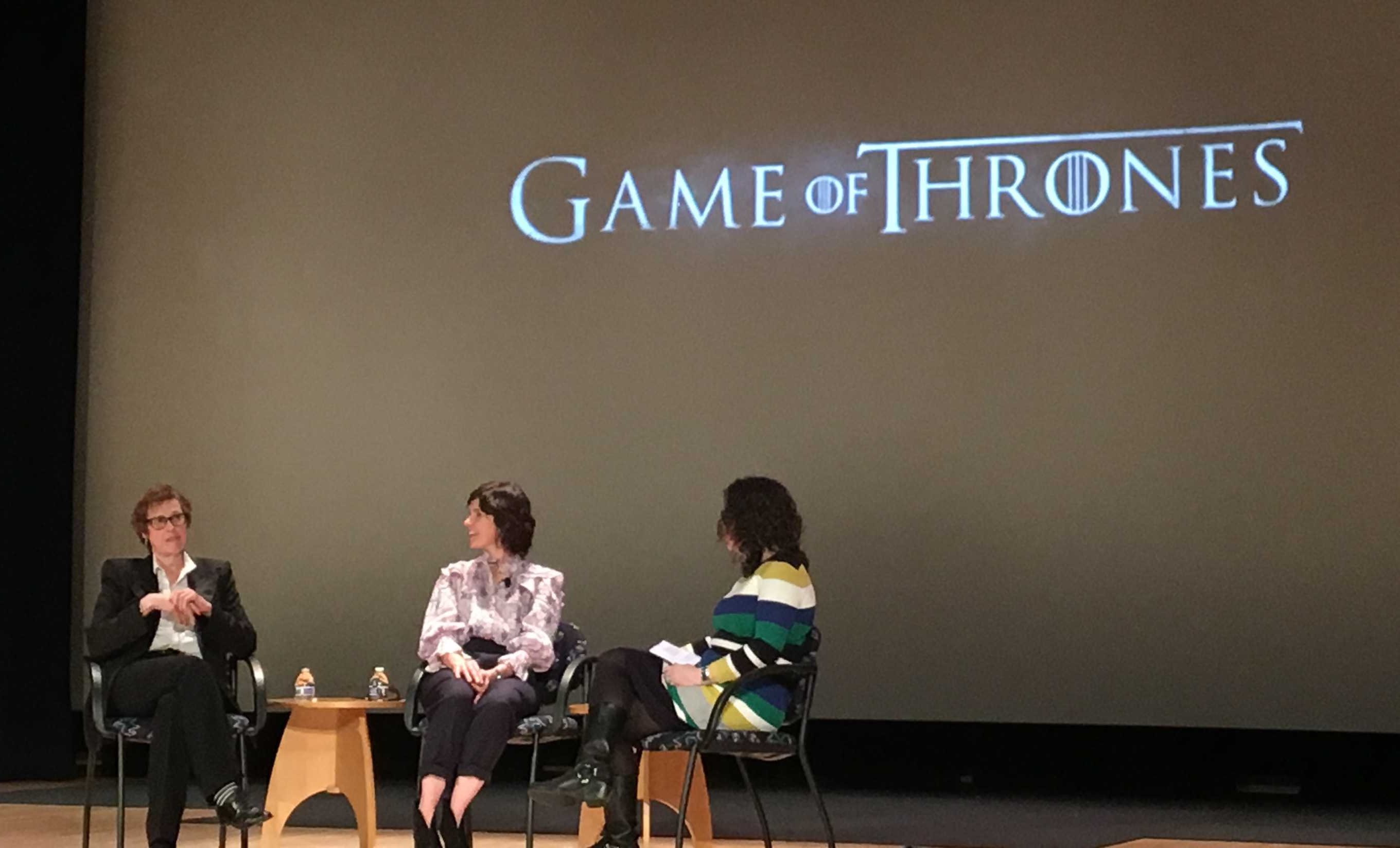 A small crowd had formed around Game of Thrones’ Production Designer Deborah Riley and Executive Producer Bernie Caulfield this past Monday as they held court in the airy atrium of the Smithsonian’s National Museum of the American Indian. In a night of trivia, factoids, humor and heart, an auditorium crammed with Game of Thrones fans ‘ooohed’ and ‘aaahed’ through a stunning visual presentation and an insightful conversation with Washington Post critic Alyssa Rosenberg. Here below are some things you probably didn’t know about Game of Thrones’ production, sets and famous scenes!

Production Designer Deborah Riley headed up the art department. She stood on the stage, poised and practiced, crisply delivering fascinating, novel and frequently entertaining information to avid fans in the audience. Meanwhile, Executive Producer Bernie Caulfield, whose influence on the show spanned seasons and continents, claimed to not know why she was there but charmed the audience with anecdotes from the set and humor that got the biggest laugh lines of the night. 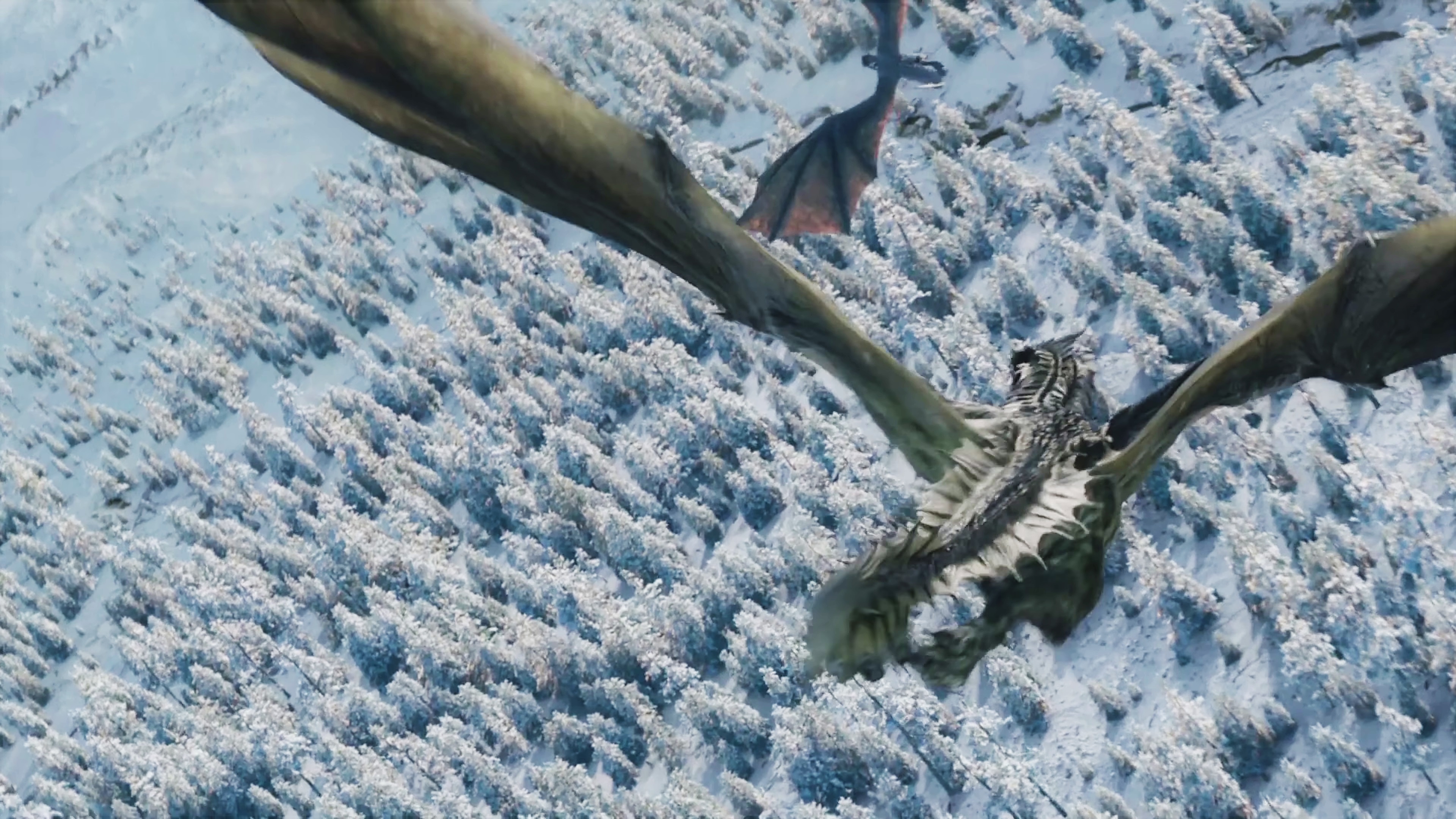 Much of the production is kept together in Belfast; the Art Department and Visual Effects occupy the same building while sets and stages sit close by. These studios are said to be freezing cold, so much so that in the first season, the VFX department had to remove the visible breath from actors due to the low temperatures. In one memorable scene from the pilot in which Robb, Jon and Theon get shirtless haircuts, the men were visibly shivering with chattering teeth between takes, as mimicked by Caulfield.

For those following along on Watchers, it takes 200 days to produce a normal 10-episode season of Game of Thrones—20 per episode. The number crept to 250 with the final 6-episode season, more than doubling the time spent filming each episode. And that was just the beginning: this season needed 40 weeks (WEEKS!) to complete its vast visual effects, from dragon fire to burning men leaping off of buildings and “people on fire” (Who??? Where???). It was due to this that the schedule was thrown off by almost a year.

Despite this extravagance, a single ship prop set lasted for all seasons of Game of Thrones, except for the inclusion of Euron’s ship last season. The ship which sailed the seas of Westeros and beyond in reality sat in a parking lot and was altered according to the sailor who needed it. From the same Linen Mill Studios lot the ship rests in, you can see the backlot that contained Riverrun and Harrenhal, among other locations.

Snow is really, really hard to deal with, Riley complains. It is fragile, expensive and easily destroyed. Their “Snow Guy” (Game of Thrones has a dedicated “Snow Guy”) would have to bathe the set with snow at the last possible second before filming, lest it dull and become mush underfoot. At times, they had to rely on VFX to get snow looking right.

Riley loves that there were so many architectural styles crammed into one show, especially her Meereen set. People accused Riley of ripping off Frank Lloyd Wright and she does not dispute it; she was asked to write for a Frank Lloyd Wright magazine after the episodes aired and described it as professional validation. 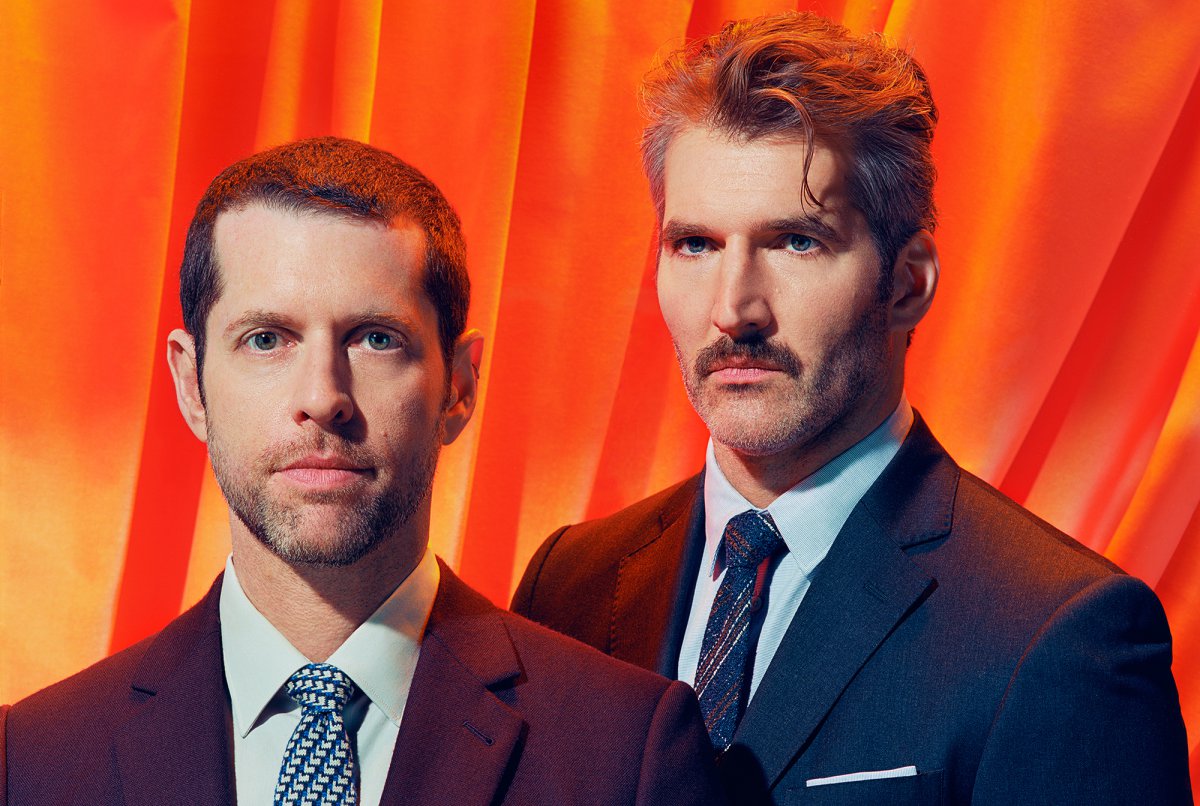 An outline from showrunners David Benioff and D.B. Weiss is given to Riley’s department and her team gleans information from it about new sets that need to be built. They aren’t dry documents but are “surprisingly funny,” says Caulfield. “We lived for” D&D’s approval, she adds, mockingly and adoringly. The showrunners felt in the face of fan criticism that it was more important to have a vision and stand by it. “They have their own vision and choose where to go with it,” affirms Caulfield.

David and Dan shut down suggestions of labeling places onscreen early in the season and wanted different parts of the world to be recognizable enough that they would not need to be labeled for the audience.

Caulfield also shares that D&D were excited about stepping away from the source material, as George R.R. Martin “had not been writing the books.” 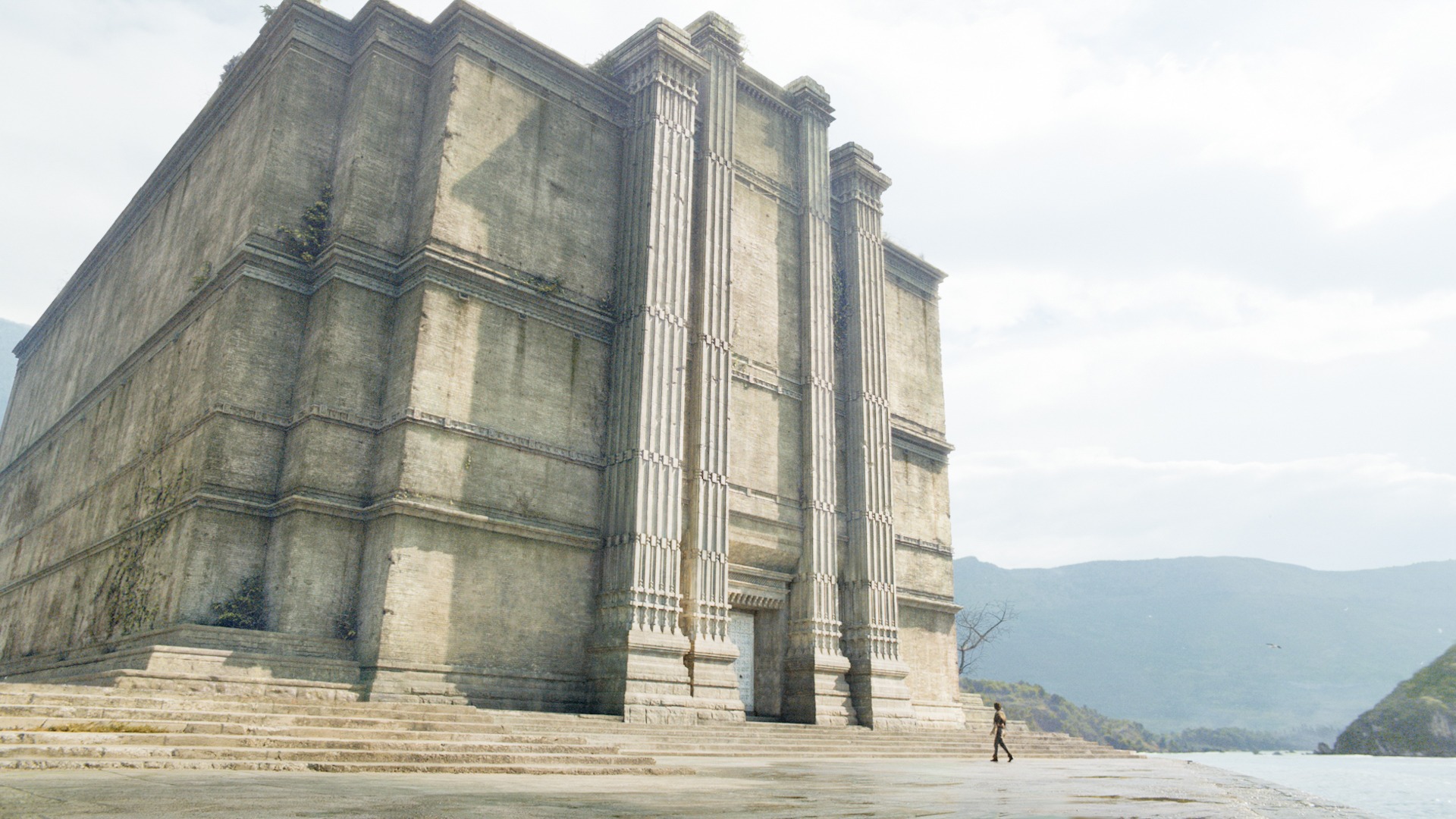 The House of Black and White, in the eponymous second episode of season five.

The House of Black and White, temple and headquarters of the Faceless Men Arya seeks in season five, was inspired by a structure Deborah Riley saw in India. Many of her creations come from places that interest and inspire her in the real world.

The Hall of Faces inside the temple, for example, was inspired in part by Indian caves and the Ten Thousand Buddhas Monastery in Hong Kong. There are some recognizable faces in the hall; out of the 600 made, crew members, producers and even a production member’s mother were among the faces of the dead.

To construct the House of Black and White, production started in a bombed-out Croatian hotel. 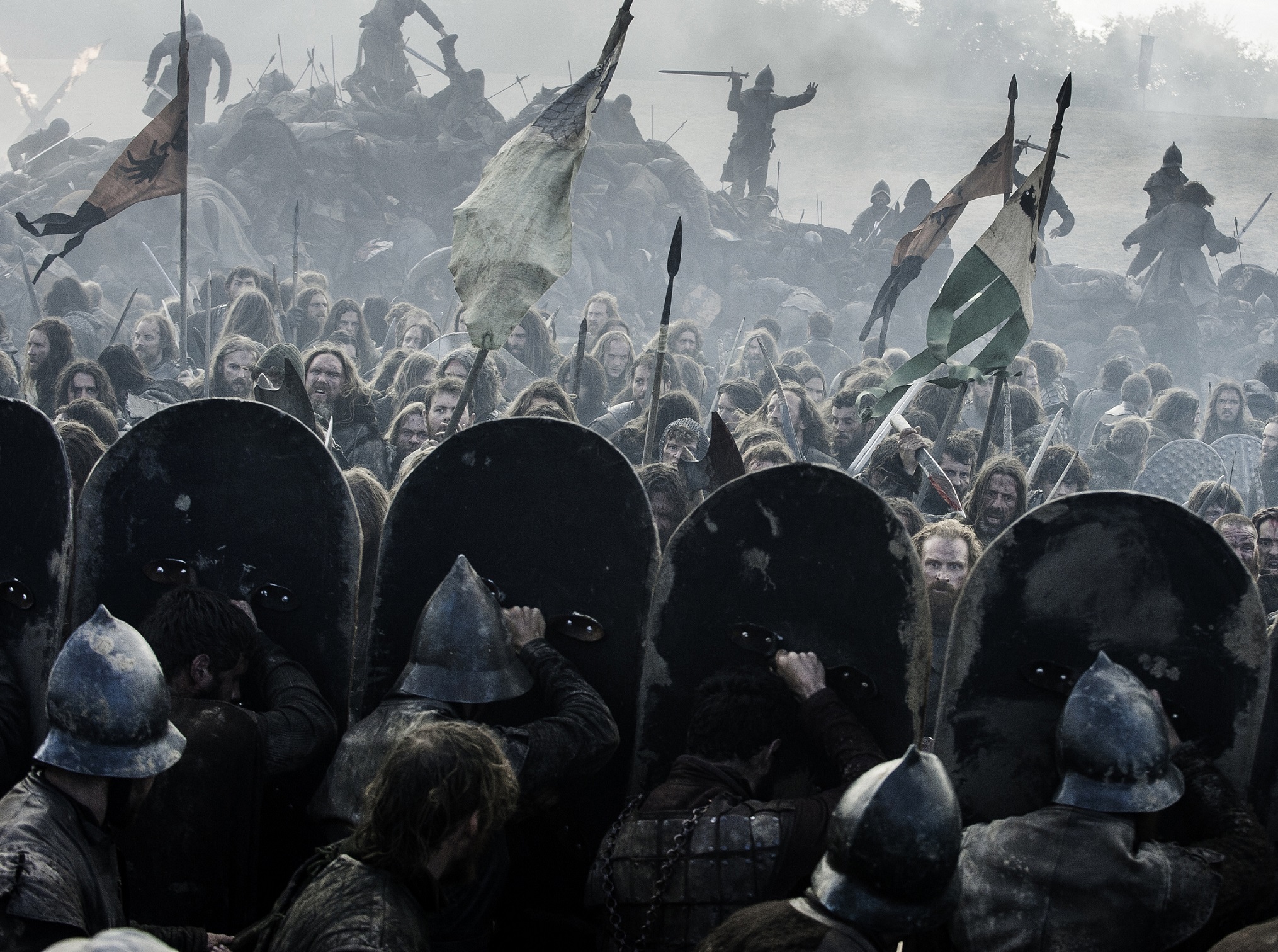 It turns out that the perfect field is hard to find. Once production found a suitable location for season six’s Battle of the Bastards, they killed all of the grass with fertilizer to perfect the look of the battlefield.

The reference image for Battle of the Bastards was Picasso’s masterpiece Guernica, which depicts the brutality, horror and wretchedness of war during the Spanish Civil War (Gernika, a northern town in the Basque Country, had been bombed by Nazi Germany and Italian warplanes at the request of the fascistic Spanish Nationalists.)

80 horses were used in Battle of the Bastards with several hundred extras and plenty of special effects. Riley and Caulfield say that the show likes to ground visual effects through having things on camera. Caulfield explains that the horses came from an English company that rescued them from Eastern European glue factories and trained them to perform. Some of the horses had to roll over during the filming and Caulfield mimics them prancing proudly after performing their stunts.

The body pile was the biggest concern for the art department. They used dead bodies and horses from different seasons and Riley says the common cry was “we need more dead bodies!”

Riley expresses gratitude for the production and crew on the show who had to prepare the body piles, especially the “thankless job” of dressing the many [fake] dead bodies and horses with armor, clothing and weaponry. 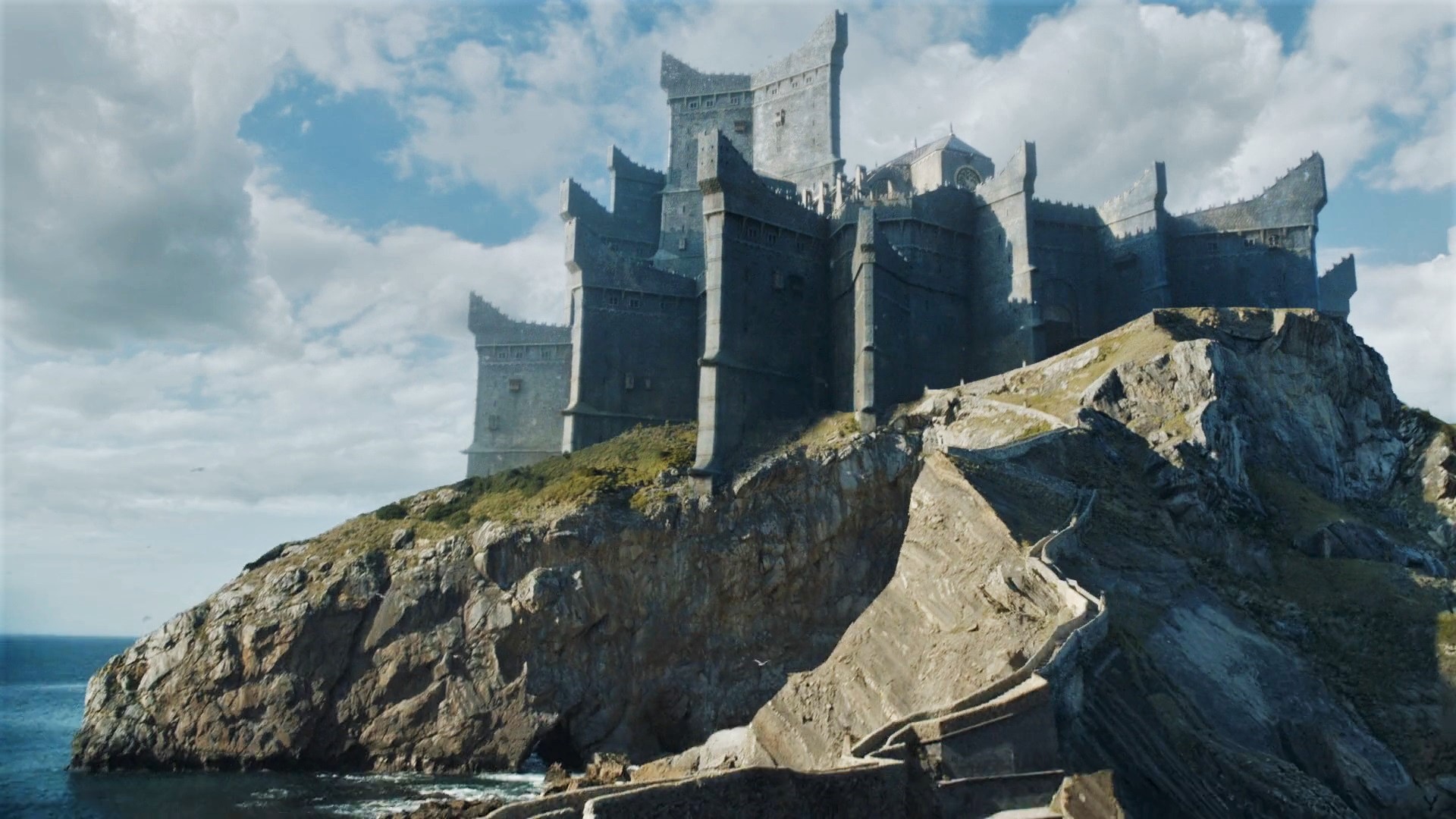 Except for the Dragonstone castle itself, everything you see here is real

Dragonstone, as I’m sure you already know, dear Watchers, was filmed on the northern coast of Spain (in Guernica‘s very same Basque Country, in fact.) For the scene in which Dany disembarks from the ship and steps on Westerosi soil for the first time, the mantra on set was “shoot fast” because the beach was engulfed quickly by the tide.

Did you notice all of those stairs in Dragonstone? Well, they’re real, from Gaztelugatxe, an old monastery dedicated to Saint John. There are 200 of them. And the crew had to lug equipment up every. single. one.

Caulfield and Riley point out the separate components (geographic and artistic) comprising the sequence depicting Dany’s return to Dragonstone. They break it down into four parts: the beach with its tides and beautiful rocky ‘flysch‘ strata that would inspire the Dragonstone throne; the gates which were created and shot by the crew in a Belfast lot; the majestic steps in San Juan de Gaztelugatxe; and the brutalist cathedral-like throne room the episode concludes in.

Riley loves the hexagonal tiles of the Dragonstone throne room. The crew worked in 24 hour shifts to complete the set. 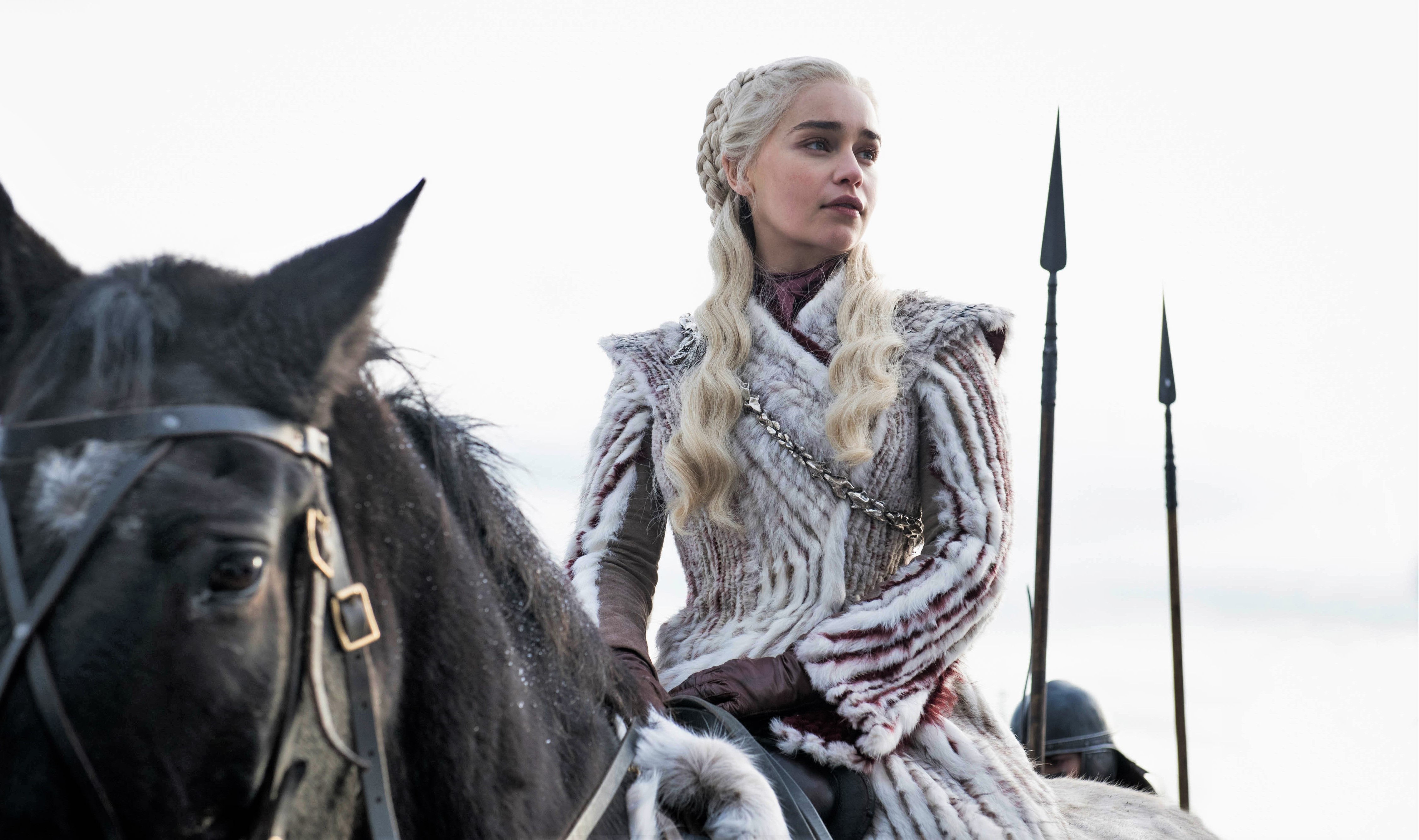 Working on the final season was a particularly emotional experience

Riley says she “cried her eyes out” at the completion of the series.

Riley and Caulfield shared that they get many calls from people working on other television shows asking them “how do you do that?!”.

They describe Game of Thrones as a small show with distinctive characters that grew over time into the epic series it is now, and said that the success of Game of Thrones actually hurts new shows that “want to be us” who try to start too big and epic too early on and miss the development and gradual expansion of the show.

As the evening reaches its conclusion, Caulfield shares a sentiment some Game of Thrones fans may agree with: “It will never get better than this.”