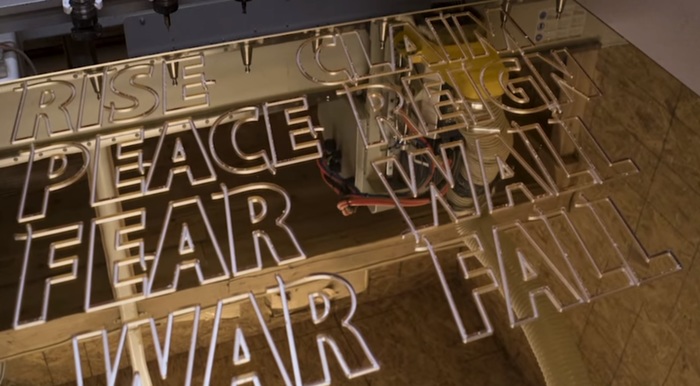 Mere days before Game of Thrones‘ season 6 premiere, HBO is launching Art the Throne, an artistic celebration of some of the show’s most memorable moments and character.

HBO asked five artists to create a piece of art reinterpreting some aspect of the show that they love. The art installations will debut at a launch party in New York City on April 20. In the meantime, the artists have released video diaries introducing themselves and their exhibition pieces and discussing their thought process behind their creations.

For Art the Throne, Cyrcle co-founders, Davey Detail and David “Rabi” Torres, are constructing a giant upside crown with the poem, “Rise, claim, peace, reign, fear, wall, war fall” written inside. Their piece is titled, “Over Throne” and is intended to reflect the show’s unpredictable power shifts. “That relates a lot to the game of thrones, the way you’ve seen so much change,” Rabi explained.

Muralist, Triston Eaton, is combining his love for nerd fantasy and “radical juxtapositions of styles and elements of inspirations” in his homage to Daenerys Targaryen. “I’m really rooting for her. She could be the one. She could be the righteous later,” he said.

Illustrator, Marcus Chin, is creating a drawing of the “unconventional,” “vulnerable” Brienne of Tarth that utilizes “patterns, and motifs and prints that [are] unexpected.” I think that in the drawings that I create I can manifest this part of the individual that sort of exists inside of the person,” Chin said.

Jeff Nishinaka is working on a two-dimensional paper statue of the Night King’s “Come at me, bro” moment from “Hardhome.” “The reason why I chose this particular scene is it really does have a huge emotional impact … it’s kind of one of those, ‘Oh my God’ moments,” he said.

Ben Gibson, Ashley Walker and Becky Joy of Pop Chart Lab are fans of Game of Thrones because it epitomizes the marriage of “rich content” and “visual, emotional content” that they value in art. They’re working on a 12-foot tall glowing red glass manuscript featuring an engraved Direwolf head to commemorate the Red Wedding. “The writers of Game of Thrones are fearless and surprising and we want to have some of that emotional impact with our art too,” Gibson said.