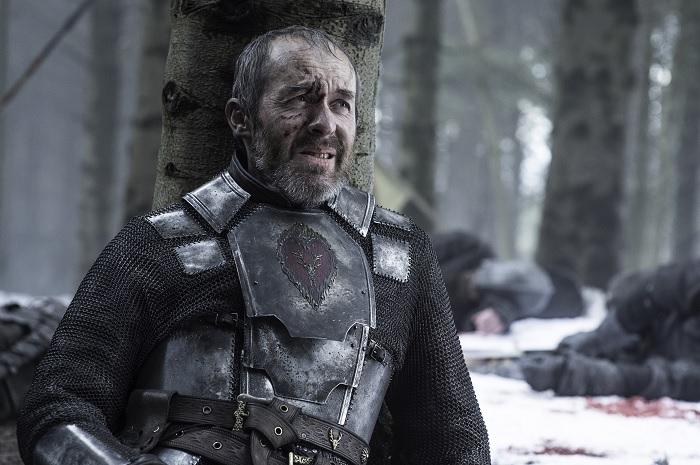 Ahead of the 2015 Emmys, the script for “Mother’s Mercy,” the finale of Game of Thrones fifth season was posted online in its entirety. Within those pages, a devoted Reddit user found a rare moment of raw emotion from the stoic King Stannis Baratheon (played by Stephen Dillane) in his final exchange with Brienne of Tarth (Gwendoline Christie).

Before avenging her murdered King Renly, Brienne allows the defeated Stannis his last words. In the final cut of the episode, they were as concise and logical as we’ve come to expect of his character.

“Go on, do your duty,” Stannis says to Brienne before his execution. True to his character, he accepts the inevitable. However, in his final moments in the script (beginning on page 13 of the Emmys document), we can now see some remorse for his infamous fratricide and the sacrifice of his only daughter, Shireen.

[He squints at her, weak from loss of blood.]

STANNIS
Bolton’s got women fighting for him?

BRIENNE
I don’t fight for the Boltons. I’m Brienne of Tarth.

[This means nothing to Stannis.]

BRIENNE
I was Kingsguard to Renly Baratheon. I was there when he was murdered by a shadow with your face.

[Stannis was not expecting this confrontation today, but fuck it, why not.]

BRIENNE
You murdered him? With blood magic?

BRIENNE
In the name of Renly of the House Baratheon, first of his name, rightful King of the Andals and the First Men, Lord of the Seven Kingdoms and protector of the realm, I, Brienne of Tarth, sentence you to die.

BRIENNE
Do you have any last words?

STANNIS: Do you believe in the life to come?

STANNIS: I don’t. But if I’m wrong, and you’re right… tell Renly I’m sorry when you get there. I don’t imagine I’ll see him wherever I’m going. (beat) And my daughter. Tell her… tell her…

[‘Sorry’ doesn’t even begin to cover what he feels about Shireen. The thought of it brings tears to his eyes, and he’s not going to die weeping in front of a woman he doesn’t know.

Stannis stares up at her.]

STANNIS: Go on, do your duty.

[Brienne raises her sword and brings it down with a mighty swing.]

Special thanks to Reddit user CloudDragon94 for picking this out!

This new text offers some closure for Stannis after the devastating actions he took in pursuing the Iron Throne and humanizes him even after such atrocities.

Does this change your opinion of Stannis at all? Do you wish the exchange had made the final cut? Let us know below!