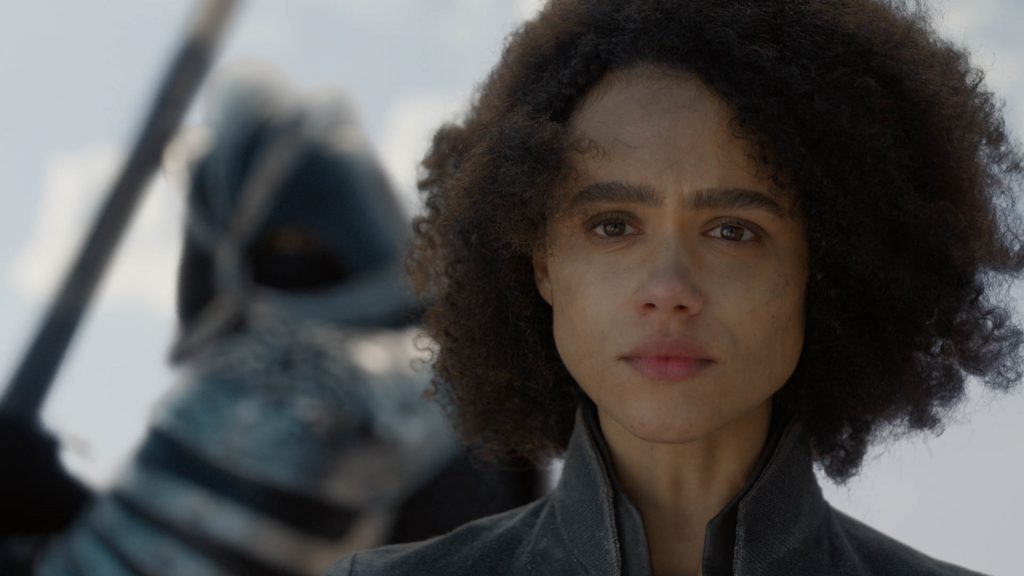 The writing of a drama is a curious thing. It is a difficult thing; to maintain characters, settings, motivations, plots, and twists. It is an almost impossible task to do so for eight seasons without running into problems of internal logic alone, which the show has sometimes been victim to (the degree to which that has happened is, of course, a subjective matter). It is an entirely different task to handle when the drama becomes thoroughly entrenched within the fabric of social paradigms, especially ones that are markedly shifting at that.

When Missandei (Nathalie Emmanuel) is standing up on the walls of King’s Landing as a prisoner of Cersei Lannister (Lena Headey), there is a congruence of those above responsibilities of writing as they come to a head and produce a devastating and consequential effect. Was Missandei’s execution an effective moment of television? Yes. Was it within her character for her last word to be “Dracarys”? Yes. Did it need to happen in order for the final stretch for episodes? Yes, no, and we will see. Did it underscore one of the weaknesses of Game of Thrones and A Song of Ice and Fire in regards to two critical social paradigms? Yes.

The questions of such responsibilities, for better and for worse, have been a cornerstone of the Game of Thrones experience. The immediate question was to wonder why fantasy stories are dominated by white voices while black and brown voices are always on the sidelines. A popular response to that question is a variation of “This is fantasy. Why must you bring race into this?” The proper immediate response is that race is already there and what matters is how the writing addresses it. 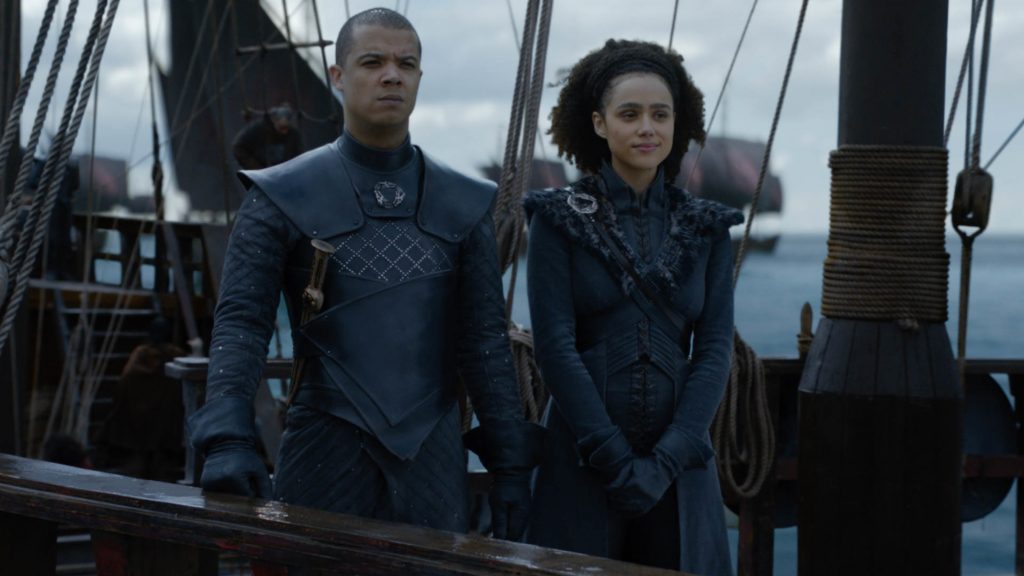 Game of Thrones has had a sketchy history of addressing race (a proper addressing of race and racism in A Song of Ice and Fire belongs in a different essay). There was a questionable element of how the show handled the Dothraki hordes in season one, but there were at least more than one Dothraki characters who had names and dialogue. Season two largely wiped them out. Season eight just wiped the Dothraki out wholesale. Season three introduced the Unsullied and Missandei in the slave port of Astapor, the former being solely represented throughout the series by Grey Worm (Jacob Anderson) alone.

The development of a romance between Missandei and Grey Worm, the former significantly aged up from the books, began in the fan favorite “The Mountain and the Viper.” The development certainly made sense from a story perspective, as the two would be able to bond over the traumas of their past, their shared circumstances in the present, and the future the two of them would have together. Their romance culminated in a touching and tender sex scene in “Stormborn” before Grey Worm was dispatched to lead the charge against Casterly Rock.

There was a segment of the fandom that did not particularly care for this romance, or the jokes, which is perfectly fine. But it seemed to me and others that the show, in at least a partial awareness of how poorly it had handled race at times (crowd surfing before the gates of Yunkai, anyone?), was making a sincere attempt at making sure that Missandei and Grey Worm at least had something else beyond “we serve Queen Daenerys” (Emilia Clarke) as motivations and characterizations. Indeed, one of the best Missandei sequences was when she chastised Tyrion’s (Peter Dinklage) boneheaded ignorance of his own privilege when it came to the matter of slavery.

George R. R. Martin has been heavily influenced by real history, from the Mongols to the Black Dinner of Scotland to the Wars of the Roses, and that influence has helped shape Game of Thrones into a distinct and unique series. However, Planetos is still a fantasy world. If individuals who question the necessity of talking about race in Game of Thrones stand by the irrelevancy of that discussion, then why are the most relevant black characters still relegated to slavery? Shouldn’t black and brown characters enjoy the same narrative privileges of being the drivers of these important stories, roles outside of the ones they have historically been subject to in storytelling?

In the roles of storytelling, who is Missandei? She is a young woman from the island of Naath who was sold into slavery at a young age. She endured horrors that most of us could know by reading her story and those from our own world analogous to hers, but most of us can never understand the suffering of slavery. One day she was taken out of her chains and it seemed at last that she had the opportunity to be her own woman, to expand her horizons, to fully be able to impart that fierce, brilliant impact of hers. She fell in love and I thought that, after Grey Worm was spared in the Battle of Winterfell, the two of them would be spared the fatal fates likely awaiting most of our beloved characters. I was wrong.

There were brief snippets where the show took note of the fact that Missandei is her own person and not merely a secondary plot device for the white characters on the show: her parlaying with Tyrion regarding the slave masters of Essos was brilliant; her advice to Daenerys after she was faltering in believing in herself was arguably the best advice the Dragon Queen has ever received; and we saw a fierceness within her rise once the chains around her no longer existed. And that’s it. What did Missandei really want to accomplish in life? What were her dreams, aspirations, fears? She was never afforded that true complexity and to then see her back in chains for her final moments just poured a great deal of salt into the gaping, open wound left behind with her execution. 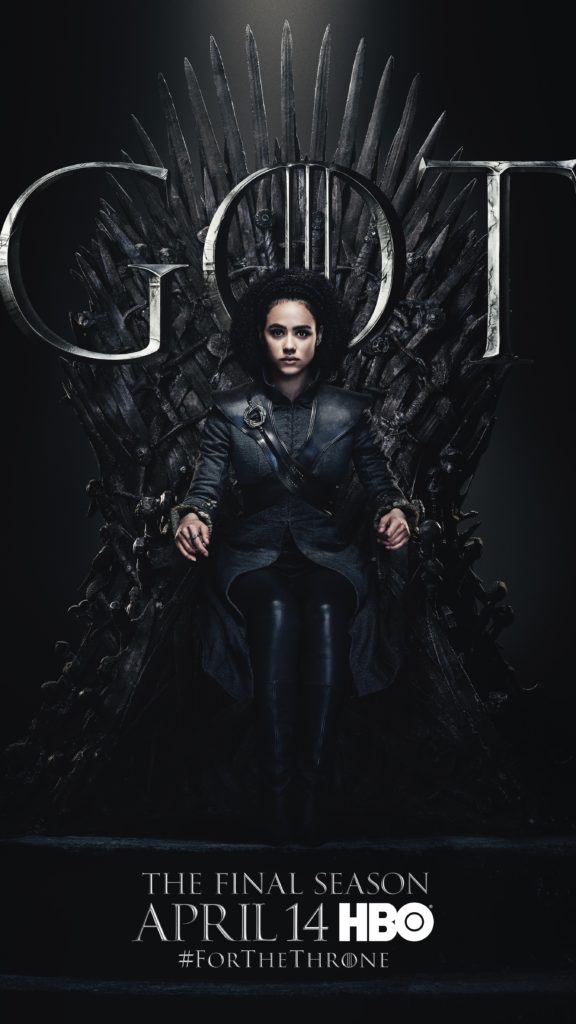 If we as the audience look at the narrative strokes from a pure writing perspective and ignore everything else, then yes, it makes sense for Missandei to die. She is the character who is closest to Daenerys and if the writers needed to kill someone off to push Daenerys dangerously close to unleashing all holy fire hell upon King’s Landing, it would be her. However, from a writing perspective, Daenerys already had that push with the death of Rhaegal. Certainly the death of the second of her three children would make her internal situation even more precarious? Why in that case kill Missandei or even have her be captured in the first place?

Missandei’s character arc began and ended with her being in chains. It ended with her being used as a bargaining chip between two white women. If the writers had intended for this to be a metaphor for how women of color are often left behind in when it comes to the progress of women as a whole, there would be perhaps something to be said here. But the writing for Missandei’s execution simply does not have that depth. It is thrilling, it is tense, but the words are hollow. Once the shock and horror wore off, for me there was simply a sense of disquiet, a gut feeling of disgust.

Her final word is haunting and Nathalie Emmanuel gave every ounce of strength she possessed as an actor to carry it off. It is a tragic end for a character who never truly received her due when she was alive. It is unfair in some ways that Missandei has to represent all women of color, but that is a situation the series created, not likely out of malice but out of ignorance. It is a tragedy that Missandei’s death is not a fitting conclusion to her character arc. It is tragic that her execution renders her functionality to a mere plot device. It is a despairing tragedy that her death serves as emotional fuel to the fire a white woman might ignite.